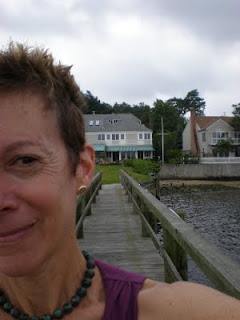 I arrived on Long Island on Thursday, July 30th. My flight from Austin was delayed but so was my flight from Dallas so I made my connection. Chris and Adrian picked me up at LaGuardia. I was SO excited and delighted to see them! As we drove to Long Island I’m increasingly amazed and delighted the closer we get to their house. Things just keep getting prettier and prettier. They live only about 35 minutes minutes from the city, in Port Washington, New York. They are right on the sound, with their own dock and beautiful yard overlooking the water. I’m in heaven, a giddy little tourist that can’t stop exclaiming. 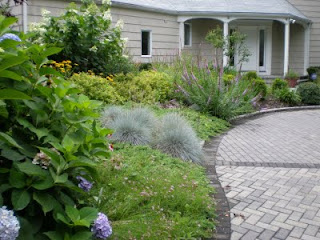 In the morning I jog around their neighborhood and then take pictures. Lee arrives from Boston and his interview there around noon. Hard to say how things went. He thinks they went well but who knows what will happen. Out of our hands now so back to patient mode. Better to just not think about it. 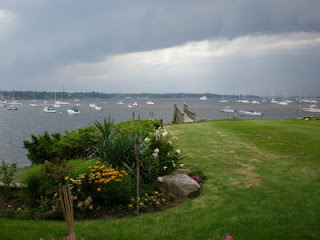 It was very rainy so no sailing on Friday. The east coast has had crazy weather this summer, with rain almost every other day. They get a call from the Berkshires where their other house is and one of their neighbors tells them that they’ve had almost eight inches of rain! That’s just insane. But we go to the Yacht Club for dinner and talktalktalk, catching up on everything. They have only been back in the US for about a month so are 5 months behind us in the repatriation process. But we can talk to each other honistly about it, without being misunderstood. They are Brits but US citizens and have lived here for years and years (30+ I think).
Saturday dawns bright and sunny. As is so often the case we seem to have brought good weather with us. We go grocery-shopping in the am and decide on lobsters for dinner. Their neighbors will join us. 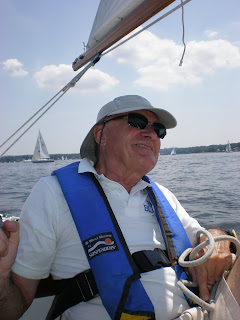 In the afternoon we go sailing. Adrian has a little 21 ft wooden boat that is strictly for racing; no cruising allowed here! As we take our seats Adrian enters captain mode. Chris is crew. We obey. It slowly dawns on me that we are actually entering a race. We approach the committee boat, figure out the starting line and off we go. Its very confusing and way more technical than any sailing we’ve done before. For the first race we only encounter mild winds. We come in 4th, and Adrian is not pleased. The second race starts and the wind dies completely. Hot and calm, with too much sun, I sit there getting cranky. Suddenly the breeze freshens and away we go. It’s a good thing they had bored me to tears before or I would be terrified. We are indeed tipping. I trust Adrian though. He knows his boat and knows what he’s doing. I’m the lightest person on the boat, so they use me on the opposite side sometimes. Its interesting, watching the course he chooses, decisions he makes, which line to sail. 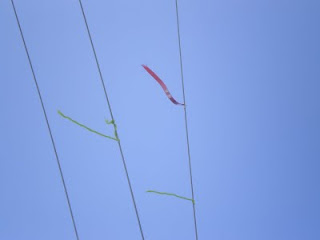 Note the tell-tails, used to indicate wind strength and direction - it was really windy for the second race!
Afterwards we go for a drink at the yacht club with the other sailors as they rehash the race. Then home to fix lobsters for dinner.
Dinner starts with something called PIMS, mixed with sprite and fruit. An insidious drink. It doesn’t taste like alcohol but sneaks up on me. As usual I am all thumbs when it comes to eating the lobster. Judy the neighbor takes pity on me…”here, can I make a suggestion?” and grabs my lobster, twisting off the tail from the body and removing the meat from the tail. Good thing too or I would still be struggling with that lobster.
Now this morning (Sunday), the weather is still and cloudy, with intermittent rain. Off to the city (Brooklin) for brunch with their son. More soon!
Posted by Lynn Nill at 6:00 PM