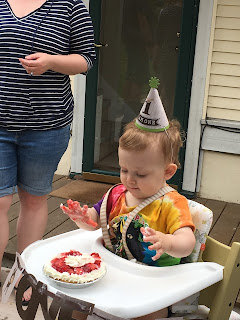 Sarah, Leo and I drove up to Duluth on a Sunday for Harrison’s first birthday party. This was going to be a long drive for Leo, but Sarah timed it just right on the way there. I got to her house around 9 AM and by 9:30 we were on the road, with Leo fed, nursed and ready for a nap. He slept for about an hour and then woke for a bit, babbled and sang to himself and fell asleep again.

We got to Duluth around 12:20 PM. We stopped to get some coffee for Sarah and let Leo nurse a bit and then we drove the rest of the way to Harrison’s house.

Nicole and Tom had invited friends and neighbors (and us!) to Harrison’s party. There were children, but nobody else as young as Harrison and Leo. Nicole and Tom had come up with a bunch of games to entertain both children and adults. There was a piñata that even Harrison got to take a swing at.

They put out a tent and a canoe from their camping equipment and they were a huge hit with the kids. There were water balloons and some kind of grownup lawn game, but we were all having too much fun chatting and passing Leo around to get around to that. They had a fire in their fire pit and the weather was perfect, low 70’s and no rain until later. 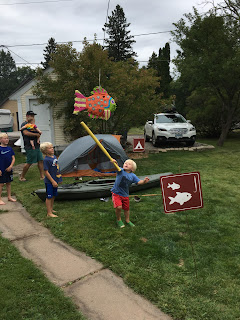 They had brats, watermelon, potato salad, chips, beer and soda and sparkling water and lemonade. They had the fixings for s’mores, so of course I had to have one!

It was time to sing happy birthday to Harrison. He was getting a little sleepy but he was game for whatever was going on. He liked his candle, and Tom helped him blow it out.

They had a special strawberry shortcake just for him. They put it on his tray but he wasn’t sure how to go about eating it. His solution was to finally just put his entire face in it! Yikes! He had strawberry shortcake from the top of his head down to his elbows. Tom and Nicole were sure good sports to let him do that; I’m not sure I could have! 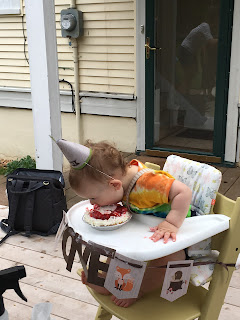 They had special Duluth cupcakes too, a forest of them! 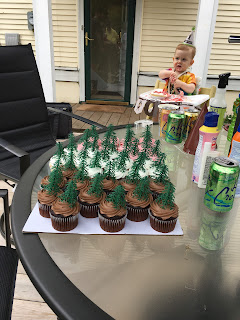 It was time for us drive back home. This didn’t go quite as well as the drive up. Leo fell asleep right away at first, but we ran into a HUGE thunderstorm and Sarah had to stop driving for awhile. The lack of motion woke him up and then he was hungry. I climbed into the back seat and let him have some bomba’s (Israeli peanut butter flavored puffs) and some bread but it wasn’t enough. He wanted more and he probably wanted mom. When the bread and bombas ran out I climbed back into the front seat and he pretty much screamed his head off for the last 30 minutes of the drive. That boy is like his mom AND his grandma - when he’s hungry he wants to eat NOW! Oh well another lesson learned in Leo-land.

We had a good time in Duluth. It was nice to see Nicole and Tom and Harrison and to meet some of their friends. Of course I had met some of them before at Nicole’s shower but did I remember? Nope.