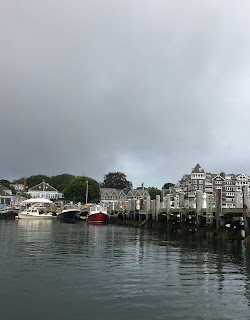 Time for laundry (thanks Bob and Beth!), dog walks, and a six mile run for me. This little island is hilly! I get a good workout, Lee buys us fish for tonight. Lunch will be in Newport. There's a darling little ferry but its costs $28 per person round trip so we're going to take an Uber instead.

Off to Newport with a very talkative Uber driver. It's not what I expect. Yes there are hundreds of ginormous yachts and sailboats. Yes there are beautiful old houses overlooking Narragansett bay. But I thought it would be more like a large Marblehead, refined, quiet, understated wealth. But it's pretty touristy, and on a Saturday very crowded.

Our lunch is at Midtown Oyster Bar. Good oysters from Duxbury, expensive drinks. Beth gets a lobstah roll, Lee and Bob get soft shell crab sandwiches. I get a hamachi poke, thinking it would come with rice, but no, it's just a small bowl of deliciously flavored fish. Lee exclaims that his lunch is way too much for him to eat, so I'm glad to help him out. I eat half his sandwich and many of his fries.

Back in Jamestown it's quiet and peaceful, more our speed. Lee and I take the dogs for a walk and then sit around at a table outside a little deli, drinking coffee, talking, people-watching. This is one of my favorite parts about cruising, soaking up the local flavor of the little towns along the coast.

We have fresh tuna steaks for dinner on the boat. We are ready to relax for the night when the holding tank's light starts flickering on. Uh-oh. We could try to make it until morning but with four people....in we go to get a pump out and fill up with water. 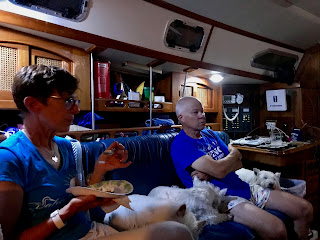 It's getting dark and we don't know where the self service pump out is. We try one dock; nope, only water. Our second try is right, and thank God there's a guy on the dock to grab the line. I'm nervous and drop the line in the water not once but twice before finally handing it to him successfully.

Leaving the men to their business I take the dogs for their evening walk. As we walk past a row of hedges the dogs become very alert. A skunk! Oh nononono I mutter and we head in the opposite direction at a fast clip. Oh yesyesyesyes the dogs say, but I win the argument. Whew! 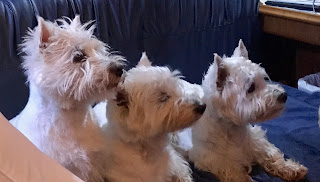 When I get back to the dock everyone is ready to go. Back to the mooring in the dark, it takes Bob with a flashlight and me with the boathook to get us back where we belong. Well at least now we're all set and don't have to deal with it in the morning. 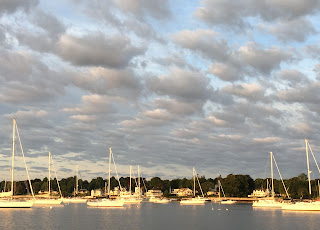 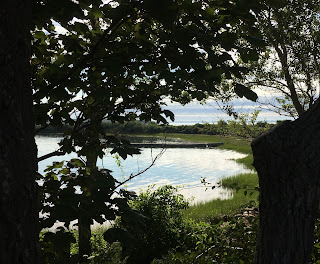 We try to get going early so we have plenty of time to get to Cuttyhunk. Cuttyhunk is an adorable little island in Buzzards Bay but their moorings are first come first serve and there are only 46 of them in their inner harbor. And in high season (July and August) its VERY popular. We're doing pretty good at getting going until Lee can't find an expensive boat gizmo that he recently bought. It was on the nav station so he thinks he might have dropped it in the trash, which we threw out when we went in to walk the dogs. So in he goes again. Then Bob finds it, in one of the drawers in the nav station. Guess what? Lee doesn't have his phone! Bob tries whistling, which gets the attention of the dock manager, but not much else. So I hale the Marina on the radio. "Onset Marina, my husband is digging through your trash. Please tell him we found it!" I'm laughing as I say this, and before too long Lee is back on the boat.

We are making our way out of the  harbor and now I can't find my hat. I think maybe I left it in the Marina bathroom, but I'm not about to go back for it. I finally find it where my tidy husband had put it, under his ball cap on the bed. That's enough losing things for the day! 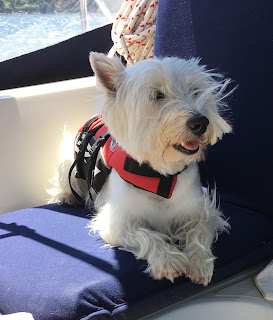 There is wind but it's died down a lot from last night, and we're sailing right into it. So we just motor, again. We promise our friends that we really may sail tomorrow when we head to Jamestown, maybe!

It's beautiful on Buzzards Bay this morning. The sky is blue blue with a few puffy clouds. Off in the distance, along the coast, there's a bank of fog. It's pretty far away but you never know what fog will decide to do. We turn the AIS on just in case. A few tendrils reach us but that's it. 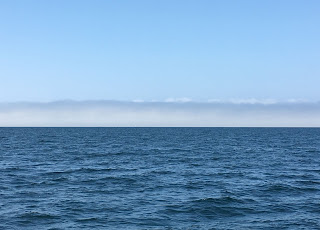 Cuttyhunk lies sparkling in the sun, surrounded by sail and motorboats. There are mostly big boats in the outer harbor. We make our way through the narrow entrance to the inner harbor. It looks like the only free moorings are the private ones, but then someone helpfully points out a free town mooring, maybe the last open one.

We settle in, put up the grill, have hotdogs for lunch. Then we go in and walk around a little bit, let the dogs stretch their legs. It's such a beautiful island, but it's pretty hot so after an ice cream cone we head back to the boat to relax. 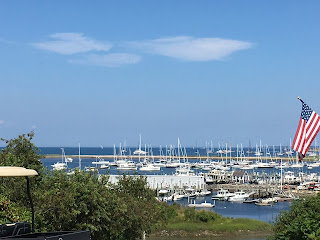 I decide to get in the water to cool off. It's chilly of course so I don't last long at all, but it's very refreshing, and once I've dried off it's great sitting under Lee's new shade contraption. It kept the rain off the boat a few days ago and now it's keeping us cool and shady. 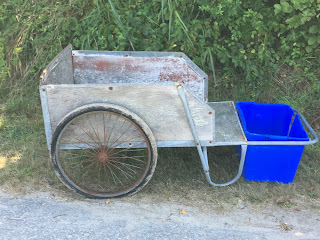 While we are lazing around on the boat we see a really beautiful little boat, dark blue with a red interior, tooling around in the mooring field. In the boat, named Misty II, is a Westie! The boat makes no sound at all, its electric. It glides around the mooring field and then disappears from view. The Royal Westie, I whisper.

We take the dogs in for an evening walk and meet the Royal Westie and His owner. The Westie is 10 years old, very calm, polite and friendly. Like most Westies he loves seeing other dogs that look just like him. The owner is old school wealthy, friendly and reserved. We talk dogs and boats for a little while, the two great equalizers.

In the morning we take our time since we only have to go about 24 miles to get to Jamestown. We decide to leave at the same time as at least 10 other boats, most of which are way bigger and fancier than us. And when we get out into Buzzards Bay there are a zillion boats heading the same direction, including Misty I. It's like a gd flotilla. There is still very little wind and what there is comes out of the south and so far does us no good at all. 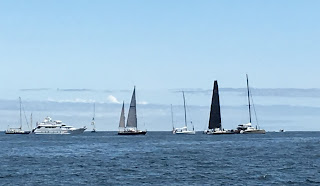 We catch up to the flotilla once, and decide that maybe it's a regatta or maybe a race that isn't materializing. There's what looks like a committee boat so it's possible. And there's some big assed racing boats too. We pass them once, then later they pass us, as if they are looking for a better place to race. We never do figure out what's going on.

We head into Jamestown. It's nice, another typical coastal New England town. It's on an island, Connacicut, across Narragansett Bay from Newport. We couldn't get a mooring in Newport and it's just as well, they're crazy pricey. 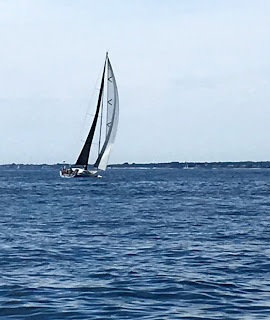 I'm kind of tickled by the fact that we have sailed into another state, Rhode Island. All of our sailing so far has been in Massachussetts. It feels like some sort of achievement.

We eat eat dinner at Chophouse Charlie's. It's not fine dining, but our food is good. Bob and Beth get lobster rolls, a first for Beth. I get the lobster scampi and Lee got the jambalaya. 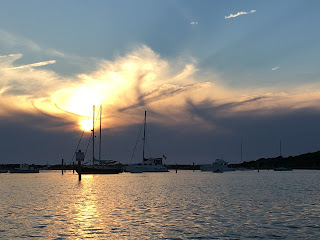 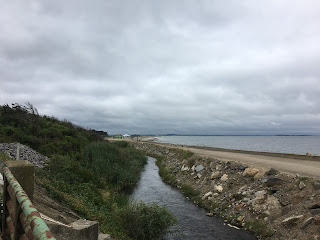 Well we were going to stop at Scituate, but the weather is threatening so Captain Lee decides we should continue on to Plymouth and stay two nights, waiting to go through the canal until Wednesday. That works out fine but brother Monday's sail just went on forever. The problem with Plymouth is that even after you turn into the approach to the harbor, you still have a couple of miles to go. And even after you turn into the harbor itself, you have to go wayyyy around before you can go behind the sea wall. It just was a very long day.

The dogs were extremely happy to get off the boat. I don't know how they do it, their bladders are much much stronger than mine. We have a carpet square on a grommet that they theoretically could pee upon but so far they don't cotton to that idea. Mainly they just sleep.

Finally on our mooring and Lee gets to try out his new sun/rainshade. It works great, at least for keeping out rain. We were able to eat out in the cockpit and stay dry. I think it will provide plenty of shade as well, once the sun comes out. 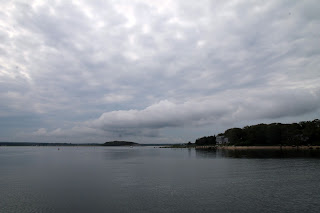 The clouds are certainly threatening but the small craft advisory has been lifted. We could have probably made it through the canal to Onset today after all. Oh well! I'm able to go for a run since we don't need to rush, along the coast. Beautiful as always. Then I can take a shower at the very nice Plymouth Yacht Club.

In the afternoon we walk around town, go to the park, explore the old mill. For dinner we go to the nearby Surfside Smokehouse. My goodness, good BBQ in New England! We are duly impressed. 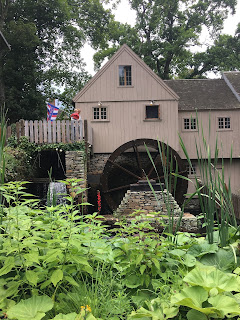 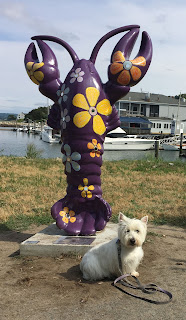 We make our way across Cape Cod Bay to the canal. We know how they time it now so that we are going the direction of the tide. That makes us bounce through the canal pretty fast, 7 or 8 knots! The wind has swung around and is coming from the south. This can be bad if it keeps going that way for several days, but this has just started so when we leave the canal there is a little chop but not bad. Before we know it we've turned the corner and we're in Onset Marina, our home for the night. They are full service so we get fuel, water and get pumped out. We should be good to go now for awhile. 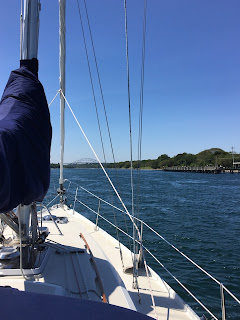