The New Hampshire Version of the Partial Solar Eclipse 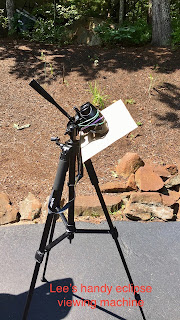 So on August 21st, 2017, along with most of the United States, we enjoyed the partial eclipse. No totality here; and until maybe a week before I didn’t realize that we would be able to see much of anything at all. By the time I found out that we could see a 60% eclipse right here it was way too late to try to score some eclipse glasses. Oh well, I thought, I’ll just take pictures with my camera. Wrong! The intensity of the sunlight could burn my camera’s optic’s just as easily as it could burn my retina. And when I went online to see about buying the appropriate filter for my camera, well they were either sold out or outrageously expensive.

That’s when being married to an engineer paid off, once again. Lee got online and whipped up a nifty eclipse viewer from my camera tripod, my bird-watching binoculars, a rubber band, and a piece of cardboard. Ta-da! Our eclipse viewing contraption was born.

Lee set it up in the driveway and we tested it out. It worked, but it took us a little bit to figure out how to focus it best. The other trouble was that darn movement of objects in space! We would get things focused just fine, but the next time we went outside to check on the eclipse’s progress the earth had moved and the sun was no longer in our viewfinder. During the course of the eclipse we had to move the tripod across the driveway, across the lawn, and almost into the flower beds! Luckily by the time we ran out of room the eclipse was over. 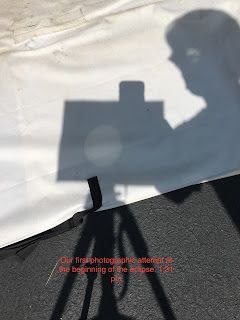 It started about 1:45 PM, right on schedule. At first the moon just took a teeny bite out of the sun, but gradually it grew and grew. 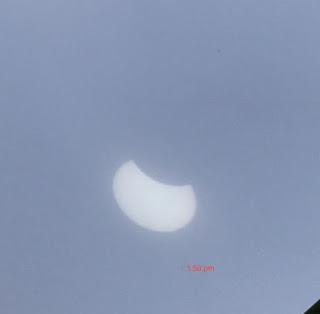 We went out to look at it about every ten minutes. It was very cool, even without totality. 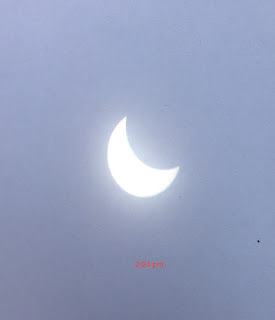 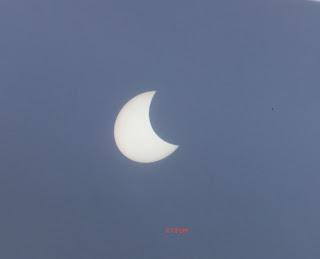 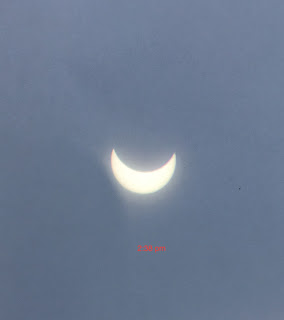 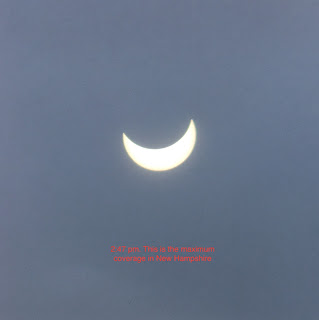 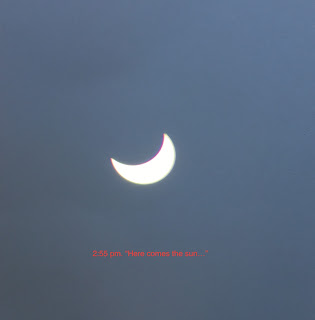 It reached its maximum point at around 2:45 PM, right on schedule. Then it started to recede.

We watched the totality spread across the US online and on TV. When totality hit Columbia, Missouri, my old hometown, I got tears in my eyes. Its hard to say exactly why, something to do with the wonder of the universe, I guess. 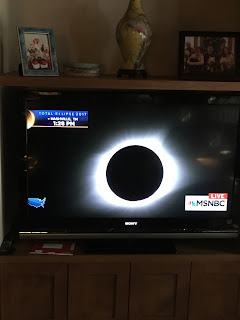 I took a picture of totality on TV when it reached Nashville, another one of my old haunts.

When we were at our max I took my camera down the driveway and took pictures of the moon shadows among the trees. This was the coolest part to me. I don’t really comprehend why the moon makes shadows on the ground among the trees. It has something to do with the little gaps of light between the leaves working the same as a pinhole camera. Whatever the reason I loved the way they looked. 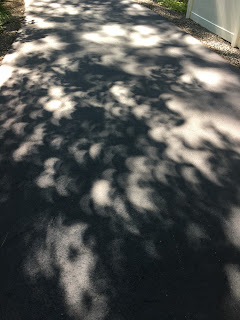 Now apparently there will be another total eclipse across the US in seven years. This one will let people from Texas to Maine experience totality. I might just have to travel to that one! 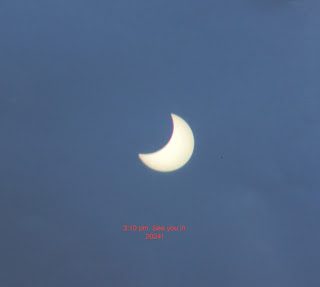 We wake to beautiful fog. Even the Newport bridge is gone. We take our time eating breakfast, walking dogs, getting ready. When we walk the dogs we see the beginning of the Fools Rules Regatta, an annual event in Jamestown where people build sailboats on the shore and then sail them down the beach. The construction materials are pretty creative! 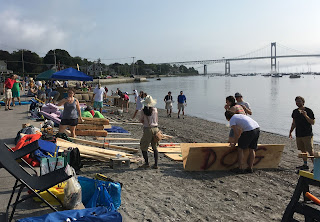 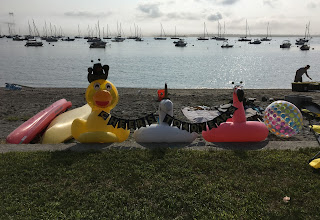 We head out of the harbor into peasoup. Lots of boats coming back in, and we decide it's prudent to do the same. We waste some time looking at pretty boats in the Newport Harbor and then try again.

It's very foggy for awhile, but we have the AIS on, and there is some visibility. Finally it begins to lift, but then we are confronted by another conundrum. The marine forecast for Buzzards Bay said waves 2 ft; these are easily closer to 5, or more, rolling swells about 6 seconds apart. They aren't scary, the boat handles them just fine, nobody is getting wet. But boy o boy this is not a good day for anyone prone to seasickness!

I volunteer to make lunch. I've never been seasick, and I think I'll be fine. Wrong! It's warm down below. I open a couple hatches but even so ..... I'm making tuna salad from the tuna we had for dinner last night. I chop up the tuna, go uptop for a break. Chop up celery, another break. Throw on some mustard and mayo, chop a little onion. Give the bowl to Beth and ask her to mix it up. Cut up a tomato. Hand up some chips and bread and get out of there just in time....that's the closest to seasick I've ever been. I now understand the stories I've read where everyone gets sick on a boat.

Back up in the fresh air I stare at the horizon and sip a coke. Gradually my stomach returns to a state more resembling normalcy. Eventually I can even eat a little lunch. Whew! 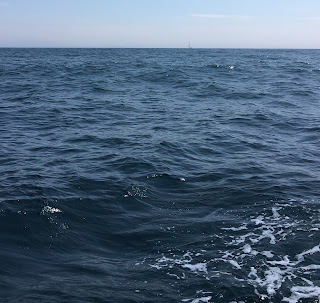 Lee looks at the marine forecast again. Aha! We were actually in Rhode Island Sound, not Buzzards Bay, and the forecast there IS for seas 3-5 ft and a small craft advisory. We later speculate that if we had known the real forecast we would probably have changed our plans. Ignorance was sort of bliss...I guess.

Once in the shade of the islands, and truly in Buzzards Bay, the seas do moderate. Between the swells and the lack of wind it is after 6 when we finally pull into New Bedford. The dogs get a short walk, we all take showers, eat dinner, and collapse into bed. Sailing through swells like that all day is just exhausting. You don't realize it but you are doing isometric exercises all day, just to stay upright!

Pleasant uneventful day. A little wind, no waves. We actually can put up the sails! The current from the canal helps us along too. We pull into Onset at 2:30, much better than yesterday! 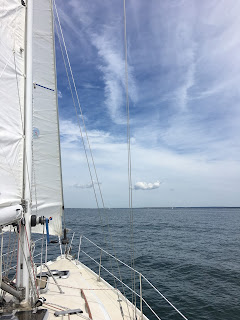 I've decided to do my run this evening. We need to leave Onset at 9:30 am tomorrow to be at the beginning of the ebb tide into Cape Cod Bay. This way I don't inconvenience anyone else and I get my third run of the trip in so I'm ahead when its time for our next cruise in September.

This run is the first of 6 weeks of hill repeats. Last year when I did these I hated them and dreaded them every week. This year I'm not looking forward to them but I decide I need to have a different attitude. Yes they hurt, but they are supposed to. A minute and a half of 90% effort, then rest for 4 minutes, repeat. It's not fun, but the end results are great, and a couple of weeks from now my hill climbing abilities will be much improved. Hang in there!

We are heading out of Onset and into the canal right around 9:30 am. It makes so much difference if we time our passage properly. It only takes a little more than an hour to pass through the canal.

Back in Cape Cod Bay at first we are still pulled along by the ebb. We even raise the sails and try to motor sail. The sun is shining, the wind dies. It's warm enough that I put on my bathing suit top. 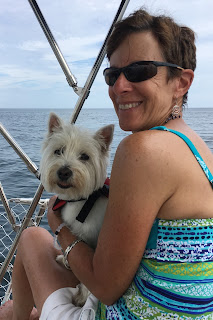 Then clouds start to gather, the wind builds and it cools off. By the time we pull into Scituate it looks like rain and I've changed into a sweater. What odd weather! It's quite windy but it never rains and we have a nice evening ashore. We try a new restaurant (for us), The Gallery. Sliders, tacos, small plates and a delicious peppery Pinot Noir. Tomorrow we head back across Massachusetts Bay, back to Salem, and home. 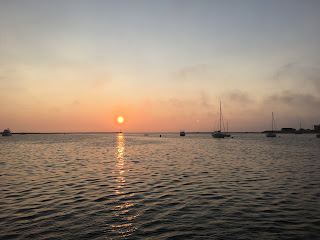