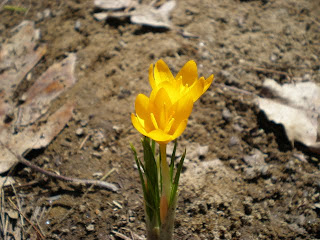 April in the garden in New England takes a little imagination, but that’s never been a problem for me! I’ve been horribly excited this week, as the first of all those bulbs I planted along the driveway last fall are starting to pop up here and there. I even went so far as to tear away the leaves and other debris from the beds (even clawing away remaining bits of snow) the better to encourage their progress. 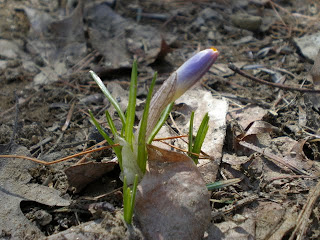 And now that we’ve had consistently warmer weather for the past week or so they are really doing well. By warmer weather I mean highs in the forties and fifties in the afternoons. Its still in the twenties when we wake up in the morning! I have little yellow and blue crocus blooming, some grape hyacinth peeking up, and other things that are still too small for me to be sure what they are. I have markers and I also have a map I made so I could figure it out if I wanted to, but at this point I don’t really care; I’m just happy to see them. 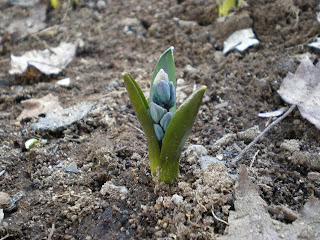 It’s been such a long, long winter. We even had three wet cold inches of snow last week, but it melted quickly. We still have several big piles of snow around the house, but they are a lot smaller than they used to be. The bushes that they buried don’t show signs of life, yet. I wonder if they survived? 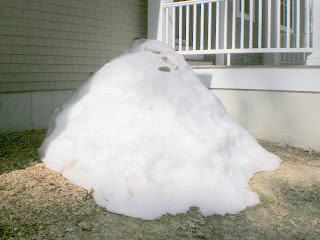 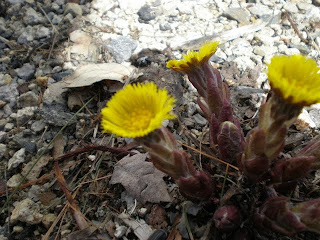 Remember this little flower from last spring? Now that I’ve been taking classes at the New England Wildflower Center I was hoping that I could identify it, using my copy of Newcombs. Unfortunately its leaves aren’t big enough yet for me to be sure, except to think that it must be in the dandelion family, and it MIGHT be Coltsfoot.
Harper and I pried the top off the compost bin today. I ended up with a wheelbarrow full of beautiful black compost. I removed the tarp from my garden and spread the compost lovingly, and then raked it in. Tomorrow it’s time to plant lettuce, spinach, radishes, arugula, beets and Swiss chard. A cold snap or two, sure to occur here before warmer weather comes to stay, won’t hurt these plants. They like cool weather. 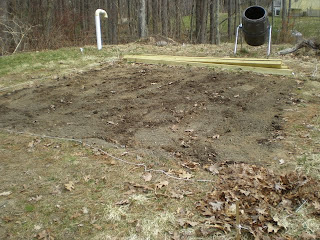 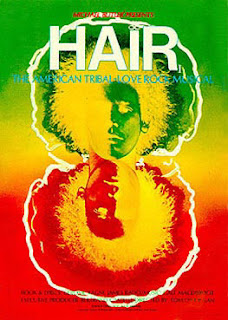 “I got life, brother…”
A couple of days ago we went into Boston for the night. We stayed at a pet-friendly hotel, so Harper came along. We ate dinner at Neptune Oyster, and then saw the current revival of the musical “Hair!”.
“…I’ve got headaches and toothaches and bad times too, like you.”
I don’t really like the actual musical very much. It doesn’t have much of a plot, and I like it better when a musical has some meat to it, something that grabs me, and that needs to be the story.
“….give me a head with hair, long, beautiful hair.”
But the music to Hair is wonderful. Seeing it again, for the first time in over forty years, was pretty strange. It was like seeing a bit of history, going back to a time when long hair was actually revolutionary. To a time before AIDS, before crack. We thought we had invented sex, and we HAD invented LSD. We thought it was all good.
“…my body is walking in space….my soul is in orbit, with God, face to face…on a rocket to the fourth dimension, total self-awareness the intention…”
The last time I saw Hair I was sixteen years old. I went with my sister, who would have been twelve, and my parents! I can’t imagine what they were thinking….everyone knew about the nudity, the drugs, the profanity. And it’s not like now, where sex-drugs-rock-and-roll are so pervasive that THAT’s the establishment and in order to be rebellious kids have to find another way. It was pretty shocking.
“…how dare they try to end this beauty….”
I was talking to my mom yesterday and I told her that I thought they were pretty good sports back then, to take us to see that musical. She said “Well I was a good sport; your father had a fit!” I said, “Remember how Susie and I went onstage at the end?” and she said, “Yes and your father had a fit about that, too.” But I didn’t remember that, so he must have complained to her about it later. He wasn’t always that way about things. He and I used to have screaming fights, about politics, about hippies. I think now that it was a very difficult time to be a parent. Things were changing too quickly and it was really hard to know what was going on. Of course as kids we really had no idea what was going on either, but we thought we did.
“…good morning starshine, the earth says hello, you twinkle above us, we twinkle below…”
To me, the allure of hippiedom was irresistible when I was sixteen, seventeen years old. And this time watching that brief period of time played out on a stage made me feel so old. Because I really was a bit young in 1966-67-68, I mostly watched it all from afar and wished I could be in Haight Ashbury for the Summer of Love.
“How can people be so heartless, how can people be so cruel, easy to be hard, easy to say no…”
As I sat there in the theatre, I kept wondering what it would be like to see Hair for the first time now, as a sixteen-seventeen year old. From a distance the plot makes even less sense than it did back then. Why doesn’t Claude burn his draft card? Why doesn’t he go to Canada? Why does he choose to go to Vietnam? He just does, a beautiful young boy, dead on a flag. And watching this, after everything that has happened since then, Watergate, 9/11, Iraq and Afghanistan, what does it all mean? It’s just such a waste.
“…where do I go, follow the river…”
Most hippies eventually cut their hair, got a job, a family, a conventional life. And we did it without regret. It was just time. The Summer of Love was so brief, and it didn’t take long for the tide to turn, for drugs to turn lethal, for Altamont and Patty Hearst and the Weatherman.
“….where do I go, follow the sun…”
But the music didn’t, it kept going. I think that the music, the revolution that happened there, is maybe the best thing about my generation, our most lasting gift to the world. We changed the chords, the lyrics, the beat, and that STILL carries on. Our parents looked askance at rock and roll, but our kids embrace it, and continue to do so. They like our old music still, Led Zepplin and Jimi Hendrix, and we like a lot of their stuff, The Arcade Fire and The Decembrists. That makes me feel hopeful, and maybe just a bit proud.
“Let the Sunshine In!”
Posted by Lynn Nill at 7:04 AM 2 comments: