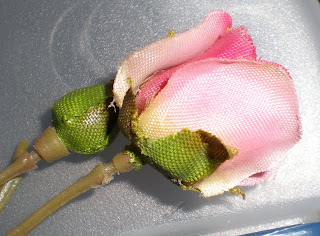 The Windham Newcomers Club has a craft group that meets a couple of times a month. Sometimes they just get together and work on individual projects, but sometimes someone agrees to lead a group project. This month one of the ladies volunteered to show us how to make spring wreaths out of grapevine wreaths and silk flowers, and I decided to sign up.
Unlike my daughter, I am not crafty. I do needlework, but follow a pattern. I get intimidated by projects that require creativity. It’s funny, because I don’t have the same feeling about writing, or even photography. Both of those activities just seem to “flow” for me. But when it comes to making something out of wood, cloth or paper I get nervous.
So at first I felt very uncertain about how I would go about creating a wreath that didn’t just look stupid. We had specific instructions about what to buy – 2 large focal silk flowers, 3 medium-sized complementary colored flowers, 3 or 4 smaller sized flowers in another color, greenery such as ivy, and filler flowers like baby’s breath. 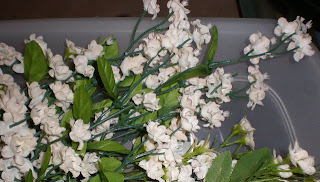 On the day of the wreath project I was running late, so when I arrived the other ladies had been working on their wreaths for a little while. At first I felt very confused. I wasn’t sure how to start, how this was going to work. I thought for sure I had just spent $80 for a bunch of silk flowers and was going to end up with a big fat mess.
But, we had a basic diagram to follow, and the lady in charge was very good. She had owned a flower shop for many years and she knew how these things were done! Slowly my wreath began to take shape.
The first step was to decide on a basic design. There were different ways to design a wreath. The first step was to decide where you wanted to put the bow. It could be at the top, the bottom or even on one side. Where the bow was situated affected the rest of the design. I decided to put my bow at the top of the wreath.
Of course when it came to making a decent bow, I was all thumbs, but again, there was a system. By making a series of loops and using wire, it turned out not to be that difficult at all. My focal point flowers were large pink roses, which also had tinges of yellow and white. My bow picked up the shade of pink in the roses.
Next the greenery was placed on the wreath. I was lucky because I had chosen ivy that came in a ready-made chain, so it was easy to place.   We used hot glue guns to attach the flowers to the grapevine. This was sort of fun. At first I was cautious and sparing with the glue, but as time went on I got more aggressive. I didn’t want things falling off my wreath! The glue gun is kind of an amazing little tool, but you have to be careful; that glue is hot! I have a small burn on one of my fingers now. Oh well, a craft war wound! 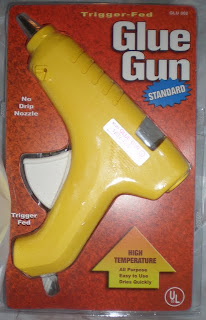 Next, the focal flowers were placed. If the bow was at the top of the wreath, then the focal flowers went at the 10 and 2 positions (like a clock face). First you positioned the flowers and decided where you wanted them to go; then you glued them in place.
Now the smaller flowers in a complementary color were placed on the wreath, followed by smaller flowers in a contrasting color. Again the lady leading the project was very helpful. She showed us how to place the smaller flowers so that they looked natural, sometimes hanging downward, sometimes facing upward, like a flower would normally grow. Some of my smaller flowers were a dark pink, and some were a contrasting yellow. She also suggested that I group the yellow flowers in several bunches. She had a lot of good ideas!
Finally the filler flowers were added to the wreath. She suggested that some of my filler flowers be connected to the bow. I would have never thought of that myself. I had two different types of filler flowers. Some of them I added to the wreath in small sprigs; others I cut into individual flowers and placed on the wreath that way.
This project turned out to be lots of fun! I was very pleased with my wreath. All of the ladies’ wreaths came out beautifully and they were all so different! I was so absorbed in my project that although I intended to take pictures, alas I did not. But one of the other ladies did, so when she posts her pictures I’ll try to include some of them here if I can.
This project was not that hard. Now I’m thinking I could do this again on my own. It would make a good present for somebody. It would be fun to make wreaths for different holidays, or seasons of the year. Just spread out lots of newspaper, heat up that glue gun, and go!
Posted by Lynn Nill at 5:08 PM 1 comment:

When I was very small there was a very pretty and stylish young woman that did the weather report on television in St. Louis. Her name was Dianne White. I later found out that she was the first African American woman weather-caster in the nation, but at the time I didn't know anything about that. But I wanted to be Dianne White. 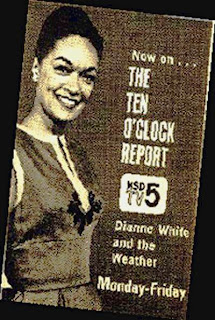 I wanted to stand in front of a map of the US, wearing beautiful clothes and point knowledgably at the cold fronts and high pressure systems moving through the plains toward St. Louis. I wanted to wear a different beautiful outfit every day and be on TV.

I also liked weather. I was interested in it. St. Louis is in a part of the world known as "tornado alley" and sometimes violent storms hit the city. The tornado that hit St. Louis in February of 1959 was terrible. The news reports say that this tornado hit in the middle of the night so I shouldn't be able to remember it, but I do remember walking home from school with the sky turning a scary shade of green. In 1959 I would have been 6 years old and in first grade.

Another tornado hit St. Louis County only a couple miles from our house in 1967. I remember coming home from my piano lesson with lightning ringing the sky. We were usually fairly blase about tornado warnings, but for this storm we watched carefully in case we needed to run down into the basement. I later babysat for a family whose home had been destroyed by this storm. I would stay with the children while the husband visited his wife in the hospital, where she was recovering from injuries she received. One of the children was in a body cast. One night while I was babysitting a thunderstorm started developing. Those poor children were terrified. I tried to console them but I was very relieved when their father burst into their apartment, knowing that his children would be afraid.

But I still loved weather. Midwestern skies are so big, you can see storms coming from far away. I loved to watch the thunderstorms form, and although I had no desire to get caught in a tornado, I still found them strangely thrilling. 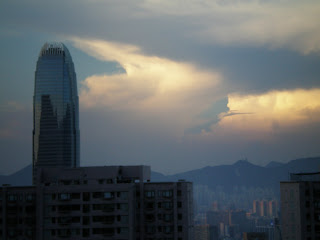 Moving to Hong Kong meant an introduction to a whole new system of weather patterns. Instead of tornadoes there were typhoons. Instead of summer thunderstorms Hong Kong had a rainy season, marked by incredible downpours that created roaring waterfalls and caused entire apartment buildings to slide into the sea. Rainstorms were categorized as Yellow, Red or Black. Black rainstorms caused amounts of water that made travel impossible and shut down the city. Yet after the rain was over and the sun came out the city always cleaned up the debris and got back to work. Even typhoons couldn't slow Hong Kong down for long.

Now that I live in New England I'm once again becoming acquainted with a new set of weather patterns. The winters are longer and colder than anywhere that I have lived before. Thunderstorms are unusual and tornadoes are almost unknown. Hurricanes are a possibility, although we live far enough inland to be spared the brunt of most storms, I think. 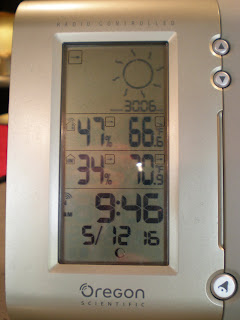 I've decided to finally follow my weather-lady dreams and I have started a weather station of my very own. No, I don't have one of those charming white wooden cabinets filled with weather equipment somewhere in my backyard. But I do have a barometer, an outdoor thermometer, an aenometer to measure wind speed, a weather vane, and a professional rain gauge. I have created a spreadsheet to record the data I collect every day. 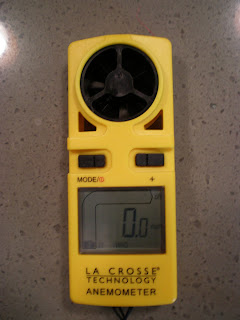 So far its been very interesting. I collect my data at around 7AM every day. I've discovered that even if it gets windy later in the day its seldom windy at that time in the morning. The humidity is usually very high at the time of day, even though it often drops as the sun gets higher in the sky. And the barometer really does rise and fall as good weather and bad moves through our neighborhood. 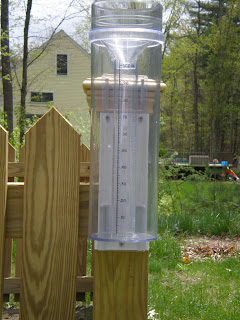 I'm still not wearing beautiful outfits or standing in front of a map of the United States, pointing authoritatively at the weather systems, but we all have to start somewhere, don't we? You'll find me peering at my rain gauge in the early morning, holding my aenometer in the air, and staring at my weather-vane. Is the barometer steady, or is it rising or falling? Go ahead and ask me, I'll know! 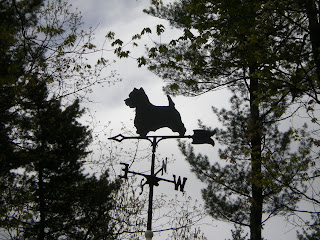