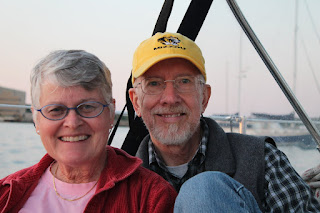 Our friends Gail and Phil were planning a visit to New England, so we invited them to do a little cruising with us in our boat. This would be our first time over-nighting on it, and we knew we had a lot to learn. But we've gone on many vacations with Phil and Gain, including our first trip to the BVI, over 15 years ago, and we knew we traveled well together.

The first day all we did was drive to Salem, MA, where the boat is moored. We needed to fill the water tanks and hose it off, so we took our time and got there around lunch time. After cleaning and loading the boat, we relaxed for the rest of the afternoon and evening, and spent the night on the boat in Salem Harbor. 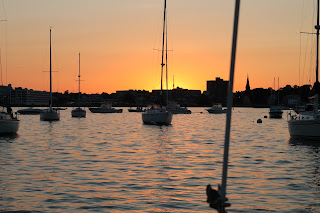 Now I'm not crazy about sleeping on a boat. It's really a form of glorified camping, unless you're a millionaire with a fancy yacht, which we are not. Lee has outfitted out boat with new mattresses, custom sheets (for the oddly shaped berths to be found on every boat), and darling comforters and quilts with a nautical theme. So the beds are pretty comfortable. 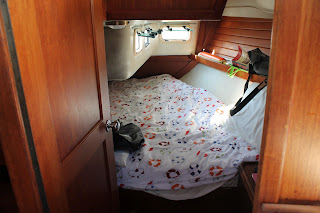 But boats toilets are a drag, especially for women like me with bladders the size of a pea. To flush a boat toilet you must pump. Pump 8-10 times to flush with water, 3-4 times to drain the water, and then a couple more to fill it back up. And no toilet paper can go in the tank either, so a nasty plastic bags must hang somewhere nearby. Sigh.

Our boat has a nice shower, but so far we have avoided using it, by staying at marinas that have their own shower facilities. I'm sure eventually we will anchor someplace where it will be very nice to have that shower, but probably not until next year. 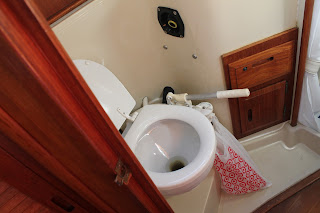 Lee has a long list of things on our boat that he wants to fix or improve this winter and one of those things are the instruments. The gps works, but the depth and speed meters are dead. We can see the depths on the gps and on the chart, but it still would be very nice to have a depth meter. And although we do have a working radar on this trip, we realized when we turned it on for the first time that we don't know how to read it very well yet.

The next morning we took our time getting underway. Later this turned out to be a mistake, but for the morning it was fine. I needed to go for a run, and found a lovely park along the shore that was perfect for a 50 minute outing. Willow Park. Yes, it was full of Willows too! I expect I will go running there again.

Then we needed to go to Beverly and fill up on diesel. Beverly is also in Salem harbor, just a little farther north. It didn't take that long to fill up, but then we needed to get out of Salem Harbor and head south toward Boston. Because of our lack of a depth meter we we're being overly cautious, so we stuck to the deep main channel, taking us well out of our way before we could finally turn south. 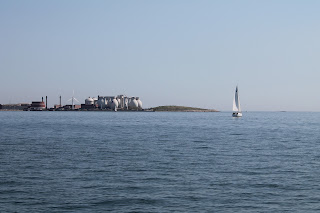 On top of that, once we turned south we were heading right into the wind. We tried to tack for awhile but eventually gave up and turned on the motor. But even with the motor we only made about 4 knots. It took a long time to get to Boston the afternoon.

Along the way, we saw freighters and a cruise ship leaving Boston Harbor. We gave them a wide berth, of course, but passed close by one of the cruise ship's tug boats as it was heading back to Boston. They were leaning over their bow, looking at something in the water. " A humpback!" one of them yelled. Wow, a humpback whale. We didn't want to get too close, however. This humpback didn't look that big, but still. Humpback whales could easily be the size of our boat! 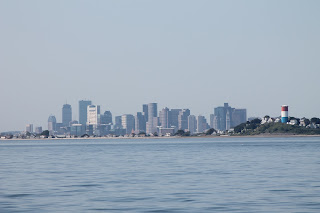 It was also really interesting to come into Boston Harbor this way. We sailed with the Boston Sailing Center for a couple of years before we bought this boat, but never sailed this far outside the harbor. We could see the city of Boston for many miles before we even began to enter the Harbor. It seemed like a very elusive goal, always glimmering off in the distance.

The sun was falling lower and lower in the sky. Would we make it into the harbor before dark? We certainly hoped so. In the daylight we felt very comfortable in Boston Harbor, but at night it turned into a maze of thousands of confusing, twinkling lights.

We made it to our slip for the night at 6:55 pm, just as the sun was setting. A good thing too. The Yacht Club where we intended to stay closed at 7pm. We made it just in time.

The marina where we stayed had great facilities. A locked slip, clean, comfortable showers. We freshened up and then it was off to the North End and Neptune's Oyster. We were not surprised to find that at this late hour on a Thursday we had an hour and a half wait, but I'd been hungry for hours, so we sat at a bar across the street from Neptune and had a few drinks and appetizers.

At Neptune everyone but me had their amazing lobster rolls, but I had the cioppino. It was all delicious, but it was very late by the time we finally fell into bed.

We woke to a beautiful morning in a sea of giant yachts. Gail struck up a conversation with a worker on the largest one, which rents for $175,000 a week! Four jet skis, a fishing boat, a three story inflatable slide, two Wolfe Stoves, and a crew of ten, all of this for a boat that sleeps ten. Who does this sort of thing besides Donald Trump? 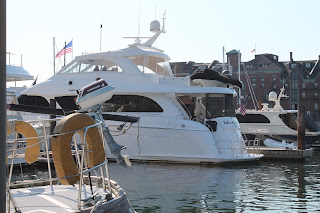 Breakfast at Anthony's diner, then out of the harbor at a reasonable hour. We could sail downwind, in a mild breeze. Beautiful weather, a much shorter sail and we found a mooring ball at Marblehead without too much trouble. Marblehead is a darling picaresque seaside town, pretty but pricey, with lots of beemers and Alfa Romeos. And good ice cream too. 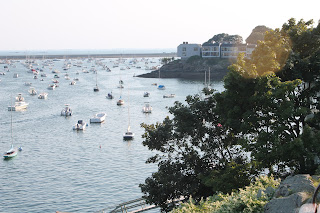 The only downside to the night at Marblehead was the holding tank on our boat that decided to become full that day. During the night Gail and I had to bare our bottoms to the moon...it took a little upper body strength, but we survived. The next day on the way to Gloucester we took a slight detour to the 3 mile line and solved our problem out there.

Gloucester is an old fishing town north of Salem with a complicated harbor. Right fork then left fork, with the entrance to a canal thrown in for good measure. We stayed on a city mooring ball. This was fine, but no facilities came with it, so no showers unless we use the shower on the boat. This would be okay if it wasn't chilly and the water tank was cleaner. We decided to wait. We could be stinky sailors for once! 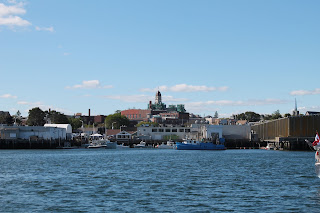 It was fun to walk around Gloucester and eat great fish in a seaside restaurant. In the morning Lee and I took the dinghy in so I could run and Lee and Harper could go for a walk. Harper made friends with another Westie while I was running. Wouldn't you know it, it was another one of Diane's puppies! We sailed back to Salem and that was the end of our first cruise in our new boat. Lee and I took down the sails for the year. In the next couple of weeks he will be working on the boat, and soon enough it will be hauled out for the winter. We both learned a lot about the boat on this trip. Lee has a long, long list of things he would like to get for the boat, and improve on it too. That boat is going to keep him busy for quite a while to come. As for me, well Harper and I (and soon Cosmo too) are just along for the ride!