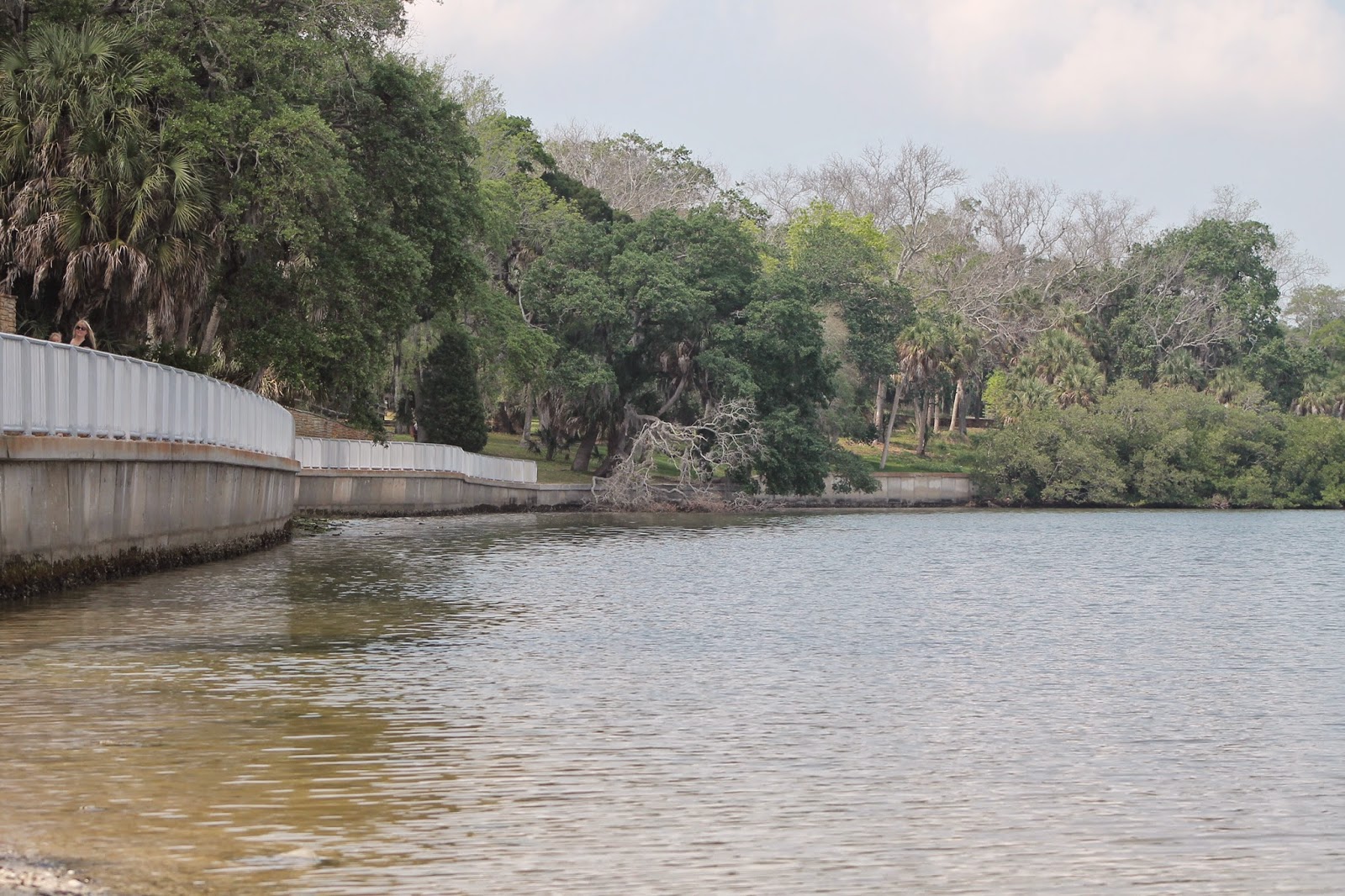 One day we decide to rent kayaks and paddle around in the bay. We put in at the marina and have to go around the very long pier to get to the other side. I have the not so bright idea of trying to paddle underneath the pier and promptly crash right into it. As people gaze at me in astonishment I back paddle furiously and sheepishly make my way around the long way. After that inauspicious beginning I'm content to float in the bay and look for manatees. 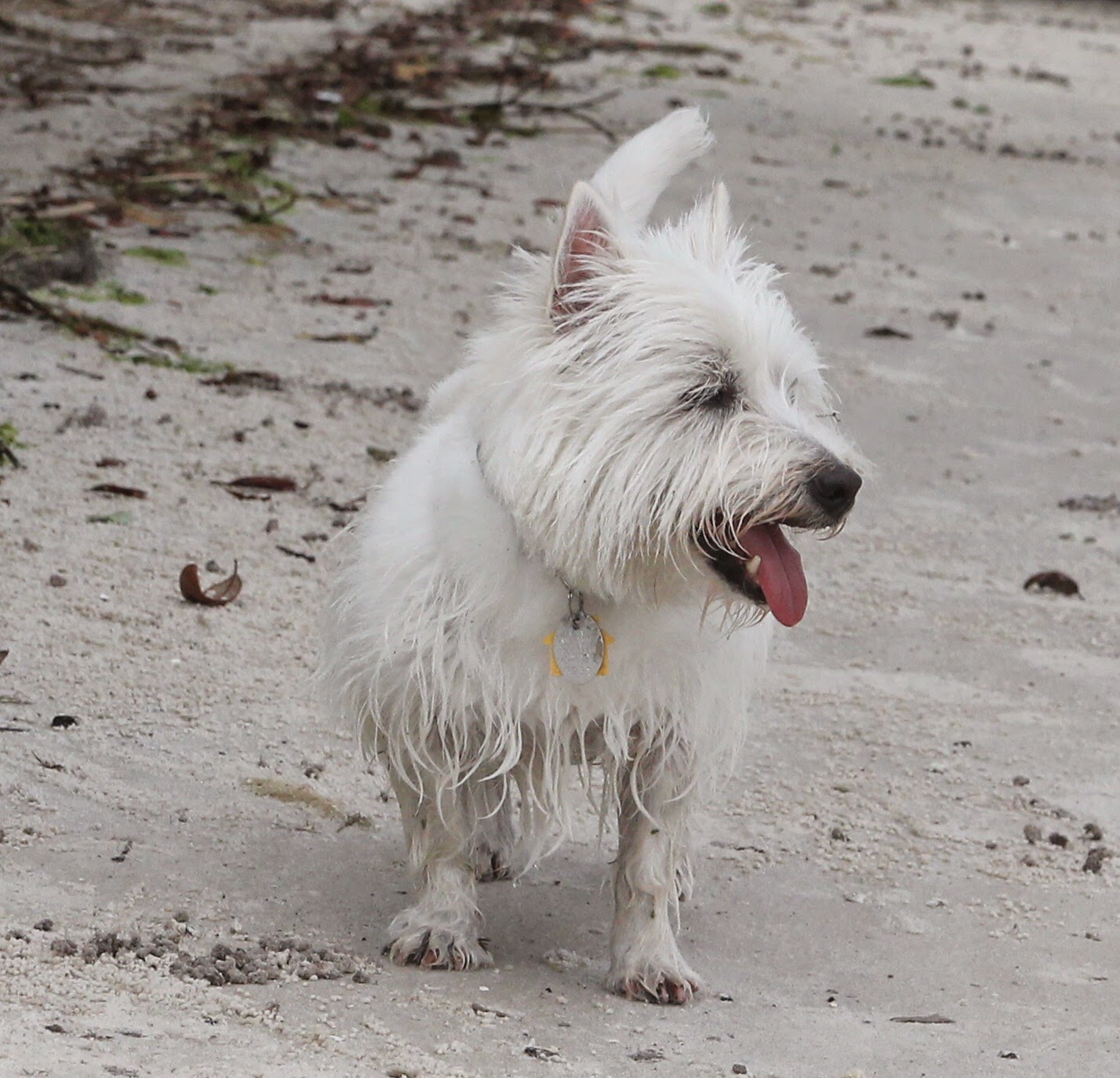 Another day we have a great idea. Let's take the dogs and go to Phillippe Park. There are little beaches where the dogs can be let off leash to dig in the sand and wade in the water. We bring a couple of chairs. The girls are happy playing in the sand and sniffing around but Cosmo has a problem. Still water does something to him. He splashes and bites at it, ducking under the water, frantically trying to get to something there. It's funny, but disturbing as well. He is obsessed. Even when we make him get out of the water he only calms down while we restrain him. As soon as he is free he goes back to trying to drown himself. Finally we have to leave before our poor little dog completely loses his mind. 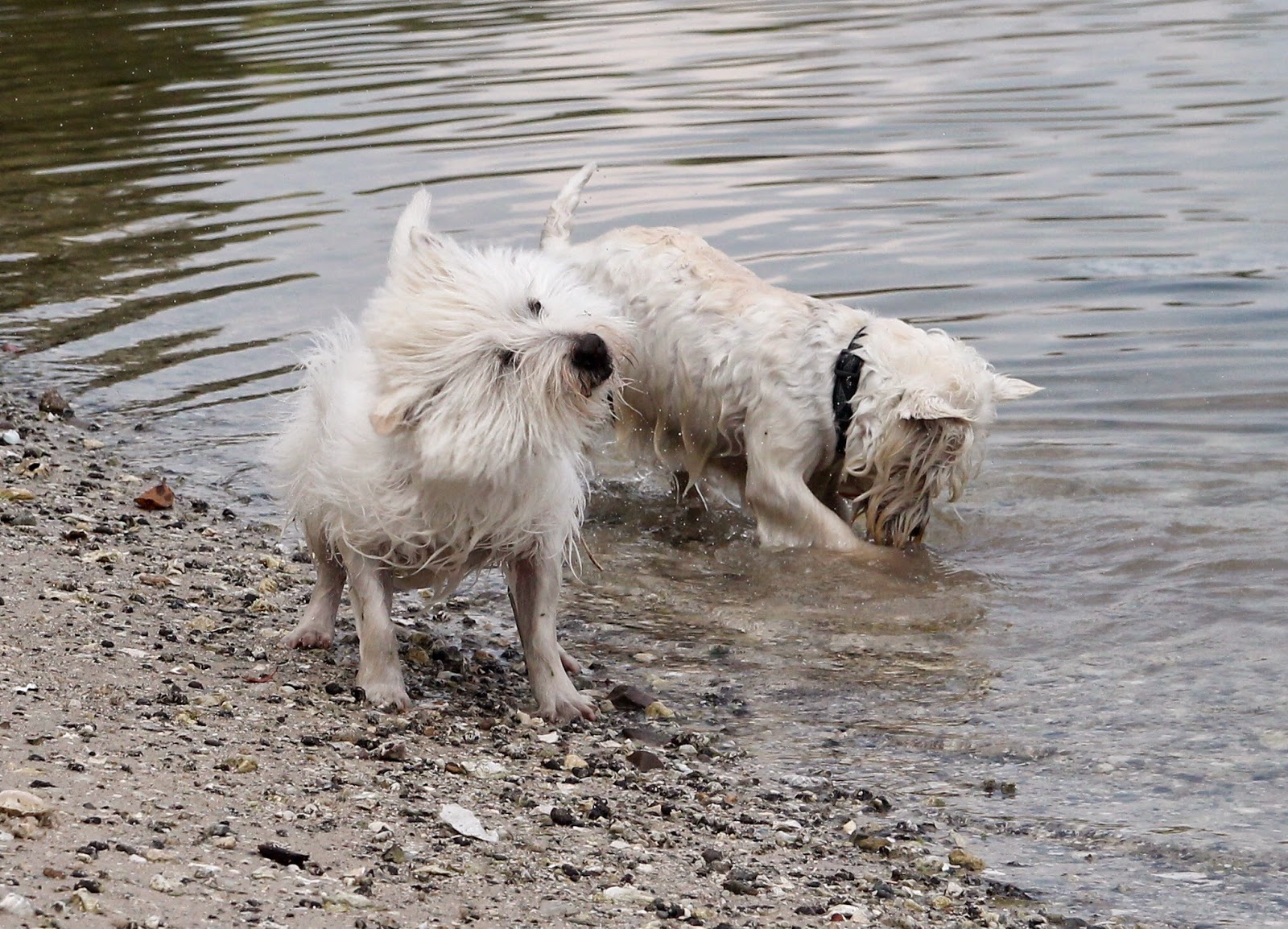 One day Diane visits us. It's the first time she has seen our dogs in their own home. They are so surprised to see her at our house. We walk to Whistle Stop for burgers, go for a bike ride, look for manatees on the pier again. It's fun to show her our little town. But still no manatees! I think they are hiding from me. 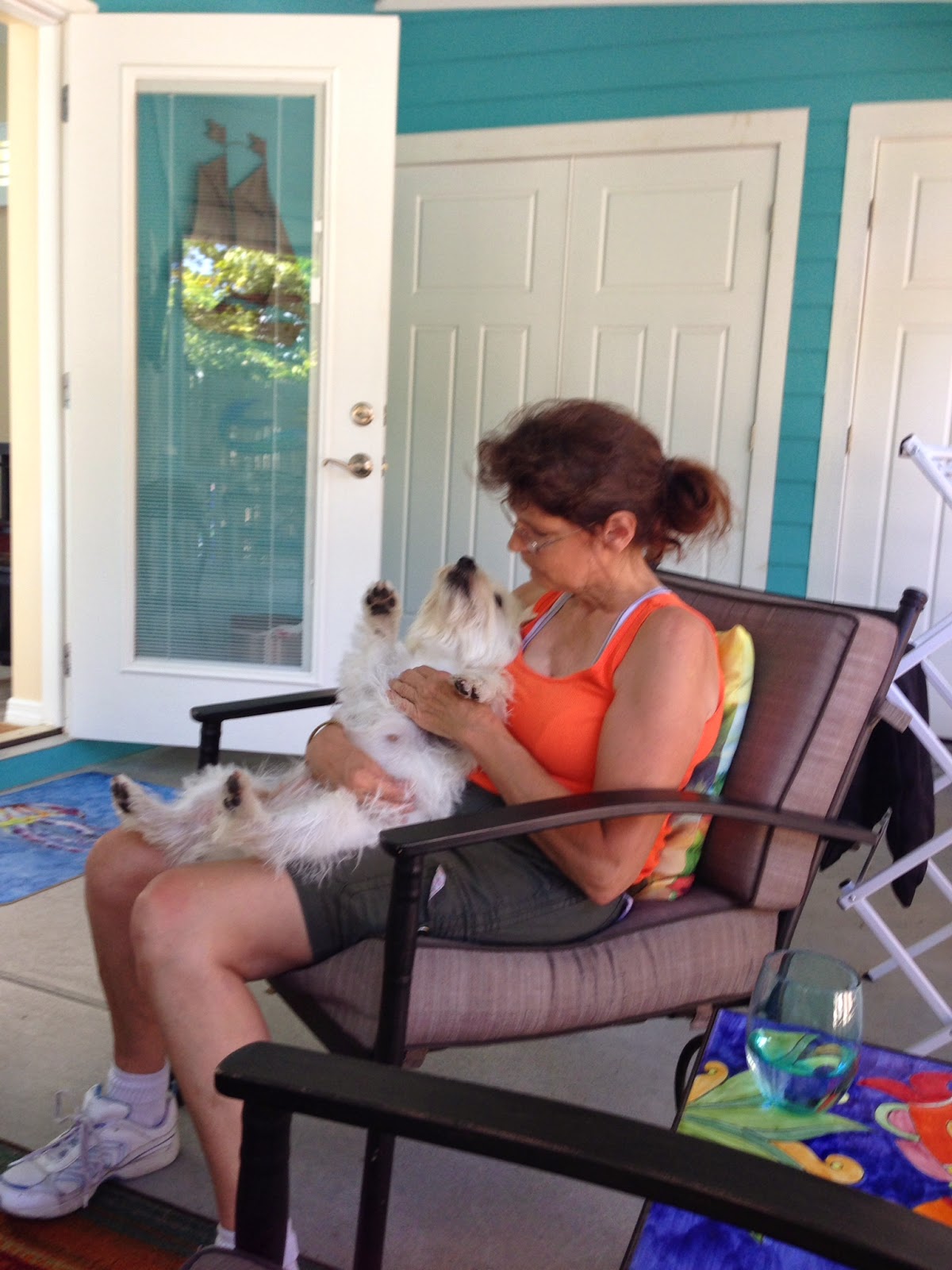 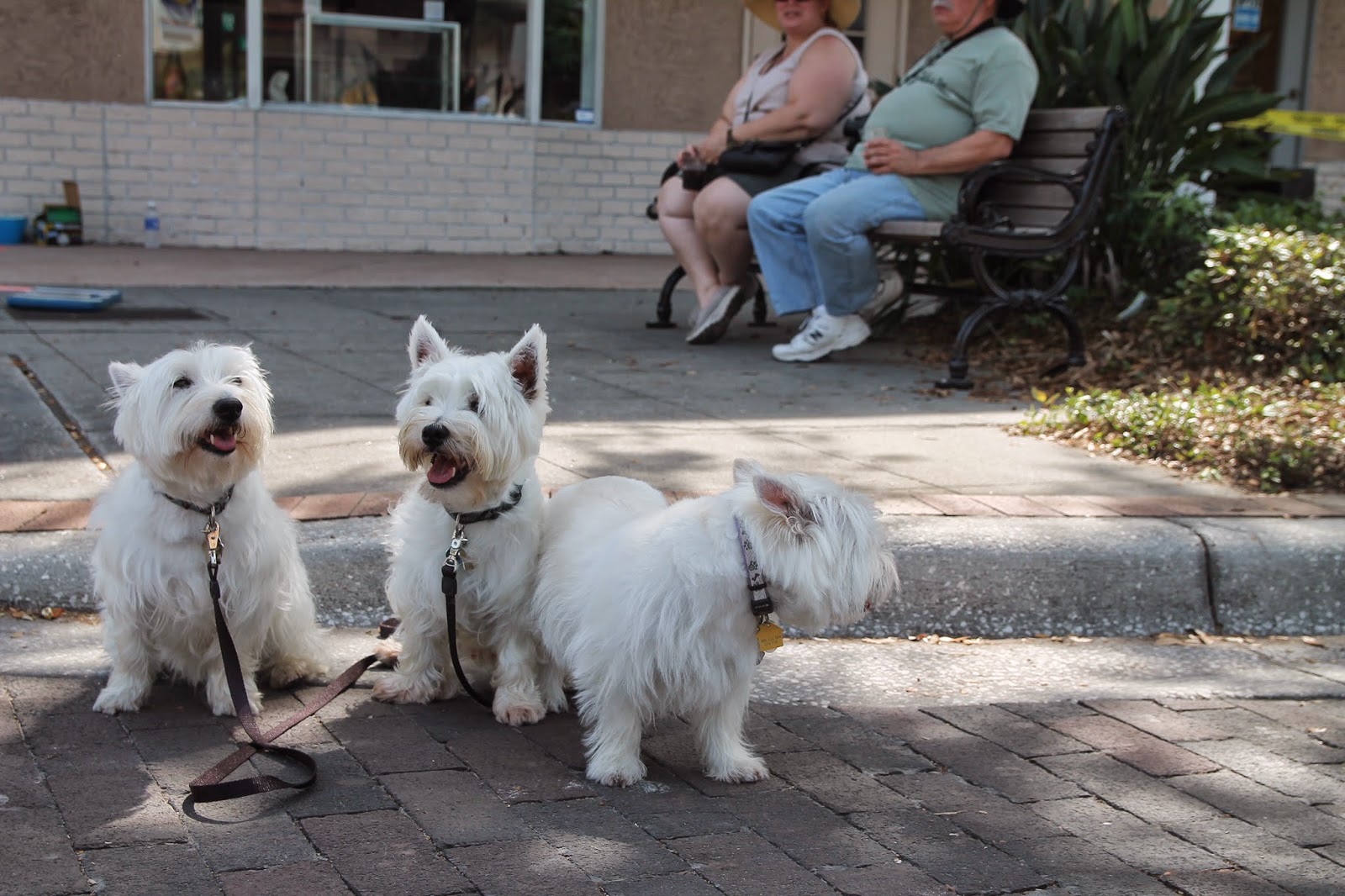 Once a month Safety Harbor has a music festival. Every third Friday they block off Main Street from 6pm to 10 pm. Bands play up and down the street and in the gazebo in the park. Bars and restaurants set up tables outside serving snacks, wine and beer. There's Kettle Corn on one corner, Italian Ice on another. Main Street is lined with booths selling jewelry, t-shirts, Florida souvineers. We grab the dogs and walk up and down the street, enjoying the music and the temporary transformation of Safety Harbor into a very lively place. It doesn't take long before we've had enough and wander home. One of the great things about the house we are renting is that it's on a quiet, peaceful street, but all we have to do is walk a couple blocks and we are right downtown. 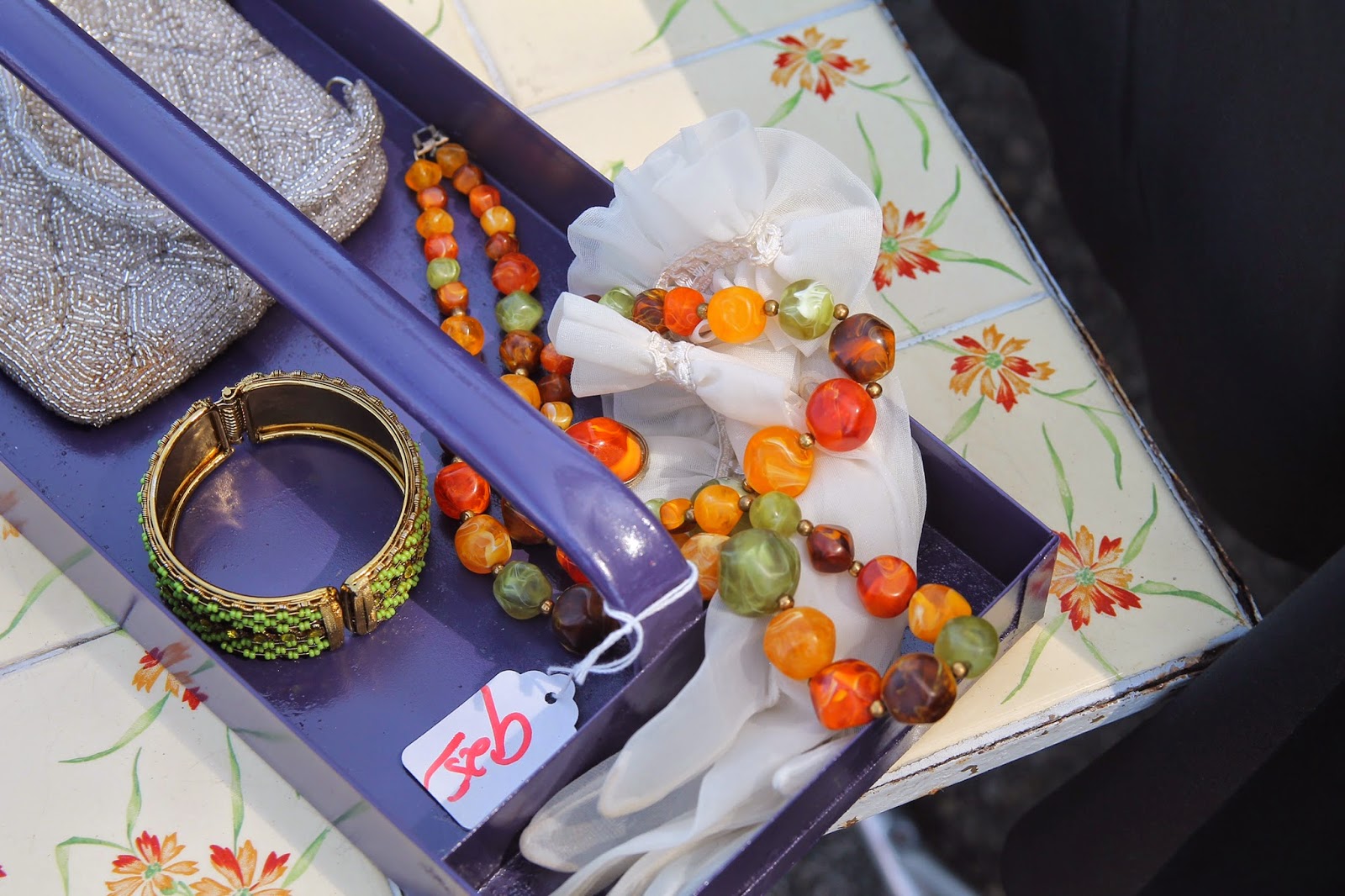 Another weekend is dedicated to the annual Chalk Art Festival. Artists come from all over the country to draw pictures on the sidewalks of downtown SafetyHarbor. It is great fun to watch the pictures take shape on Saturday. Some are farther along than others. In some cases it's hard to say what the final picture will look like. 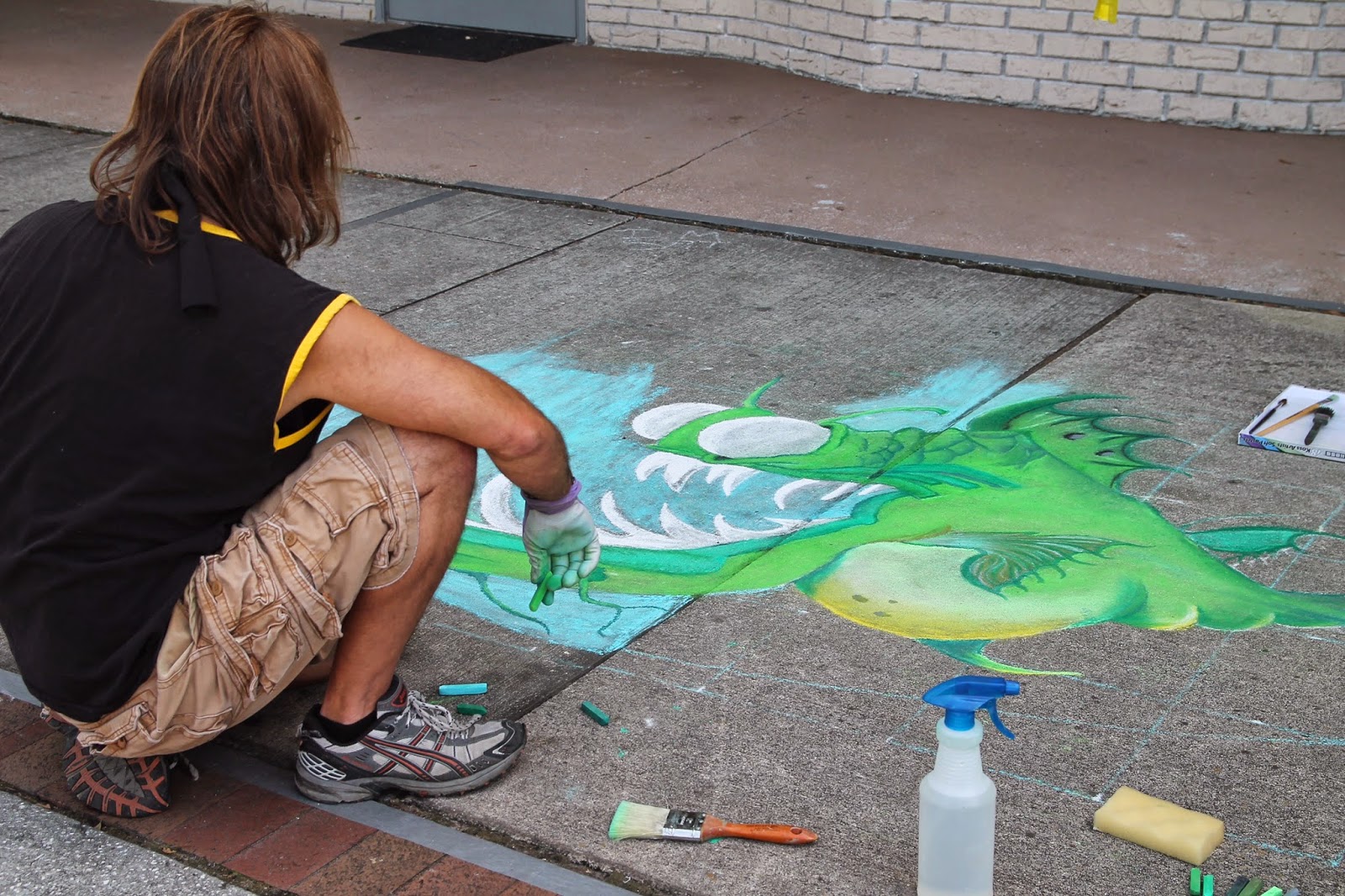 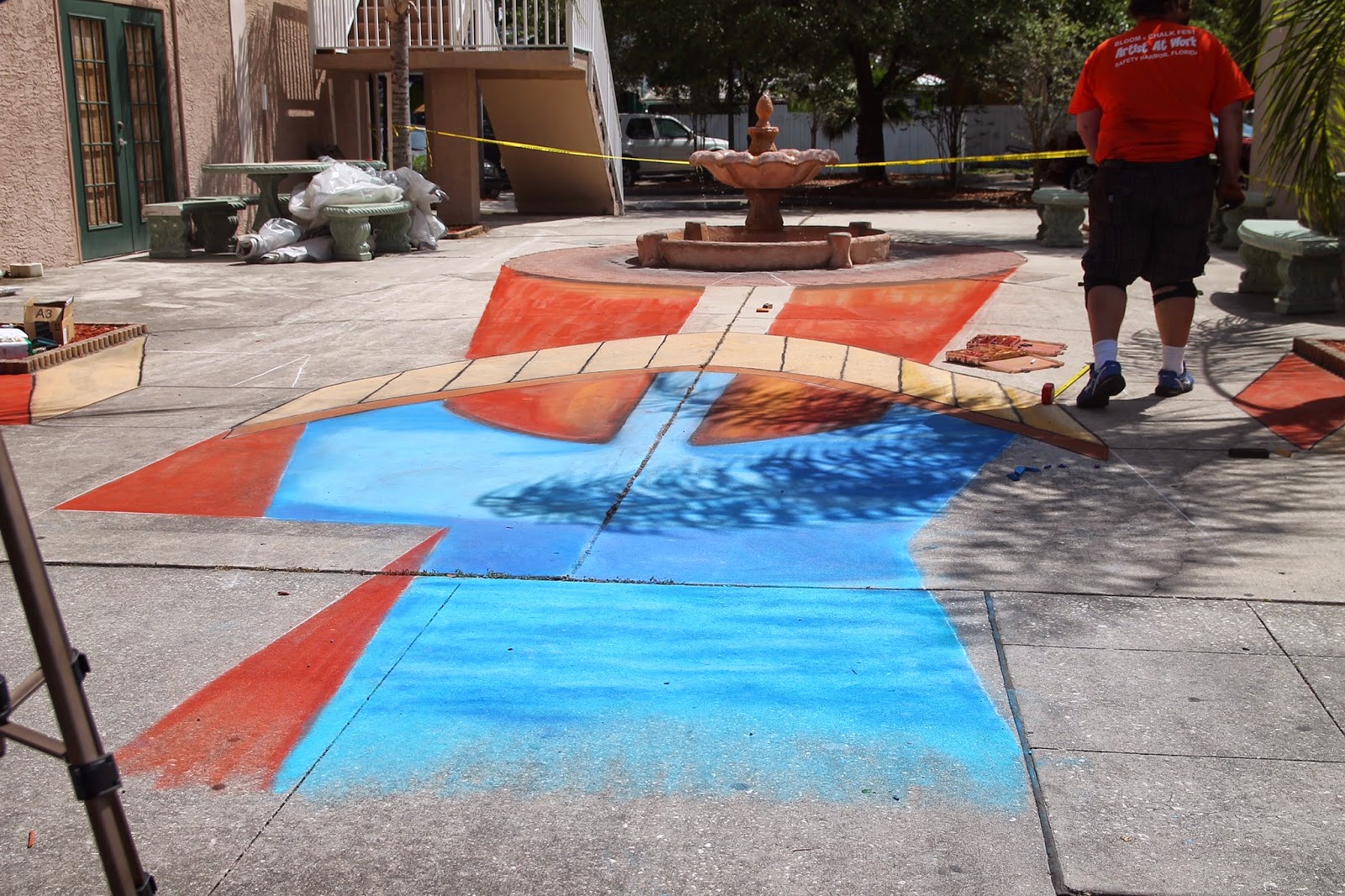 Saturday night we are in the mood for pizza so we decide to try Greggarios. It is decent pizza, not Shakespeare's by a long shot, not Flatbreads either, but it's okay. I say to Lee that I am a pizza snob. It takes a lot to get me to say pizza is really good, but I have no problem with eating pizza that is passable but not spectacular.
The next morning it's time for a 14 mile run. I follow the same path as I did for my 12 miler a couple of weeks ago, but this time I head off on some streets after the Phillies trading camp. I'm really figuring out the logistics for the longer runs I will need to do next year if I am in the final training phase for Boston. I actually get in the car one day and drive along the road I think I will need to take. Eventually I think I will have all the long run routes figured out in Safety Harbor, just like I do at home. 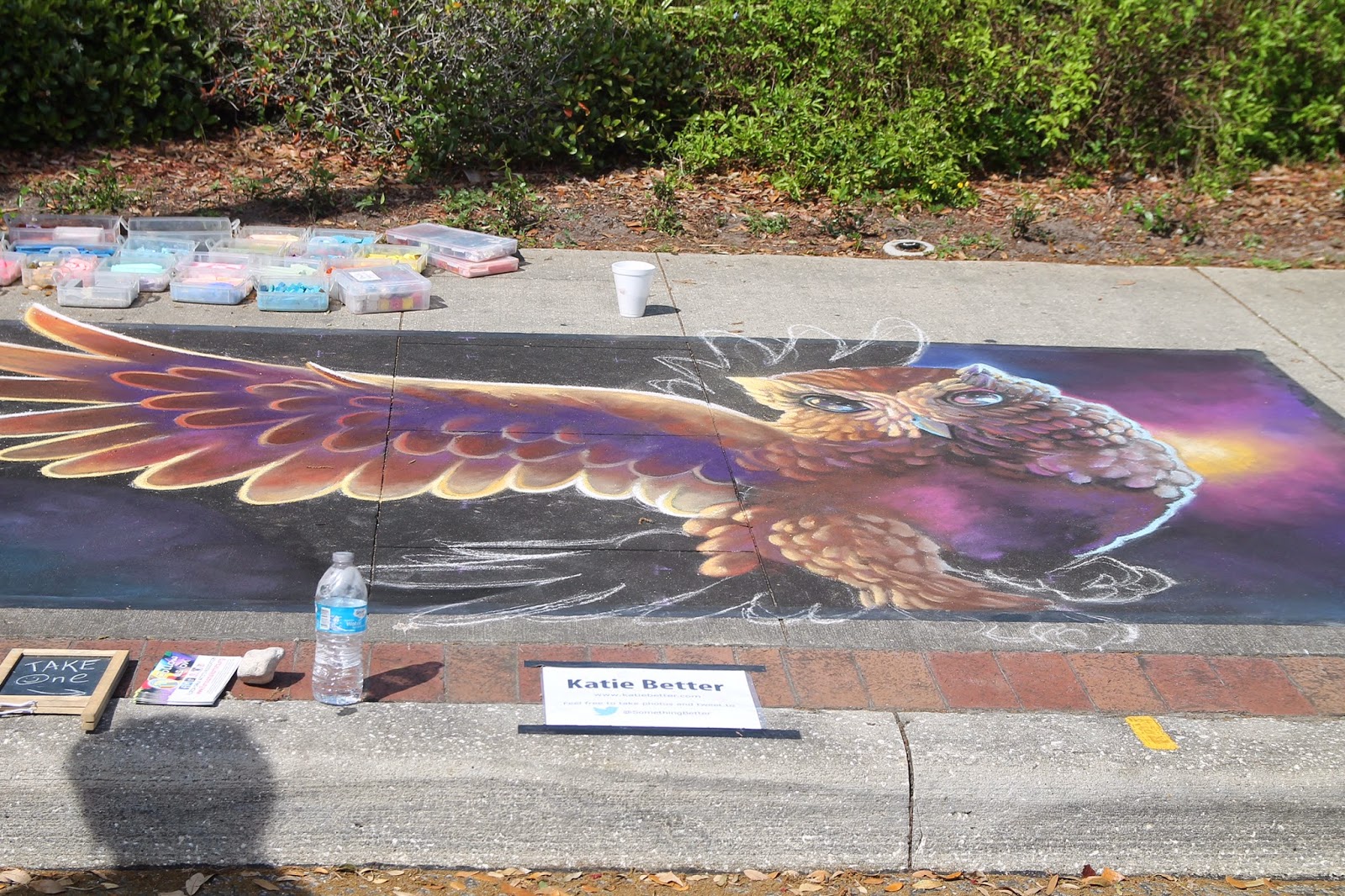 After my run we go back downtown, for brunch at Marker 39 (delicious eggs Benedict yum!) and then to look at the completed Chart Art Festival pictures. Some of them are really beautiful, they just seem to jump out of the ground right at you. I take lots of pictures and its a good thing I do because it rains hard that night and most of them are gone by the morning. 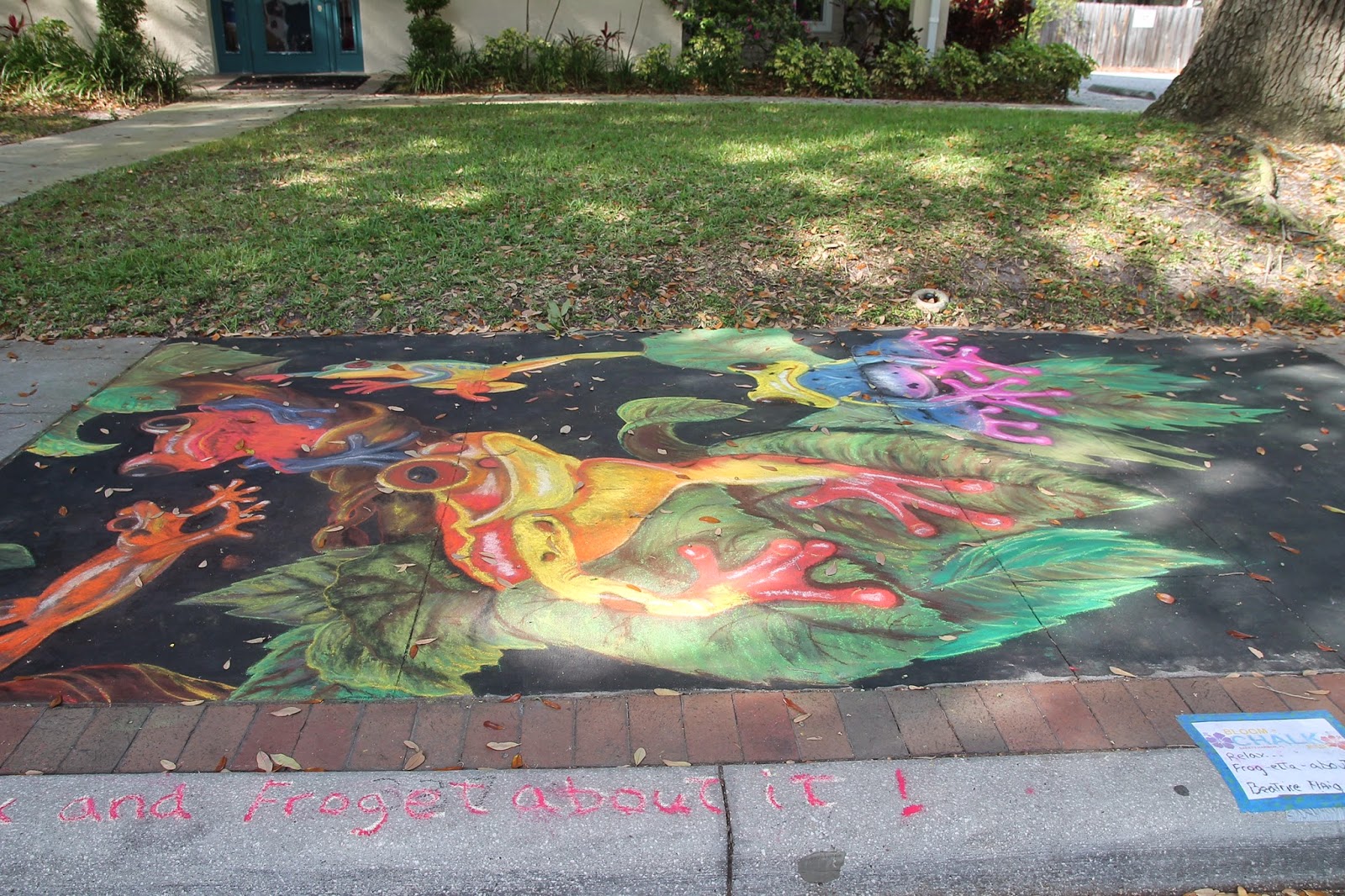 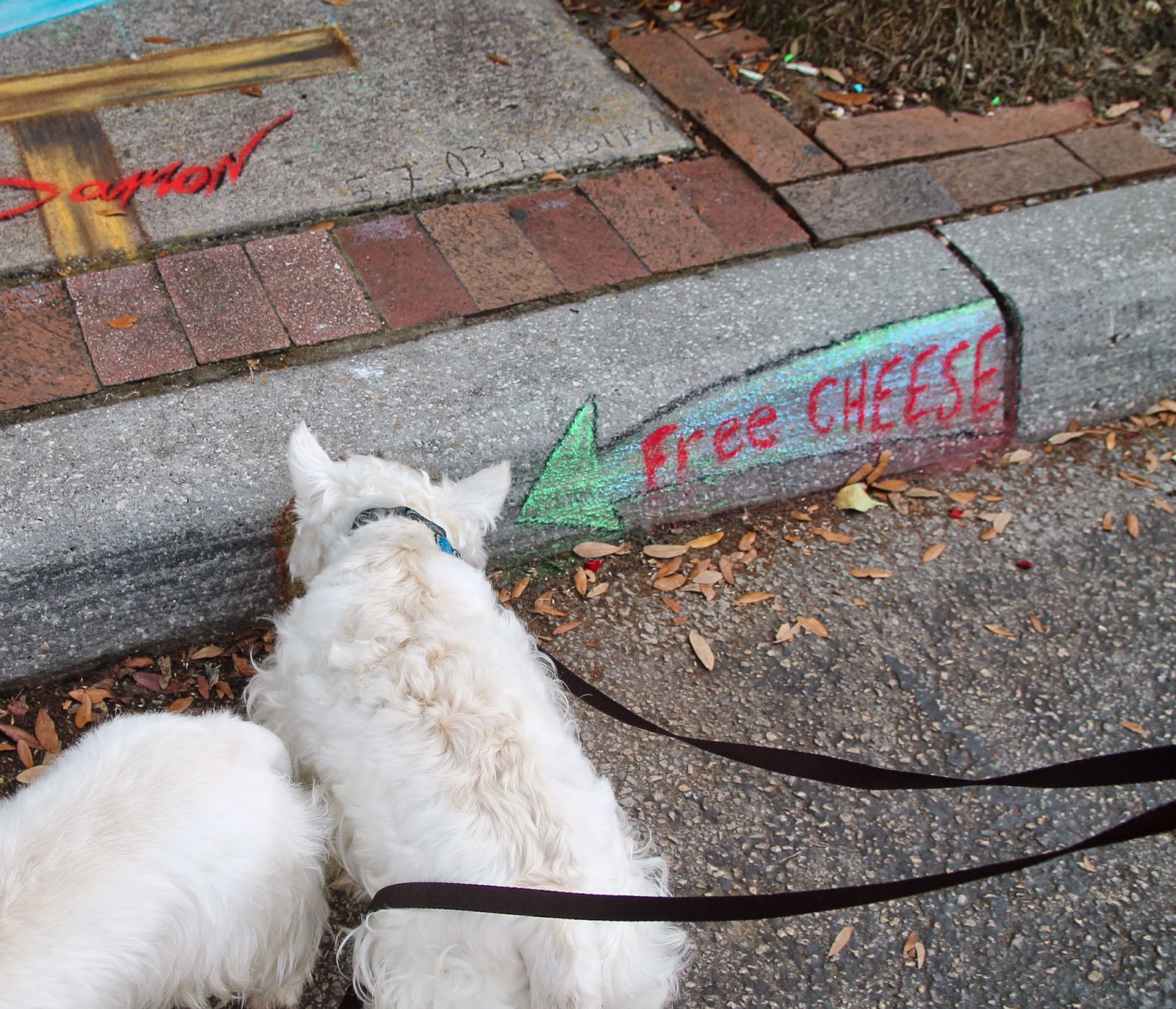 On Wednesday we decide to go for another day at Clearwater Beach. Since it is midweek and we go earlier in the day, the traffic is much better, and the beach is not nearly as crowded. 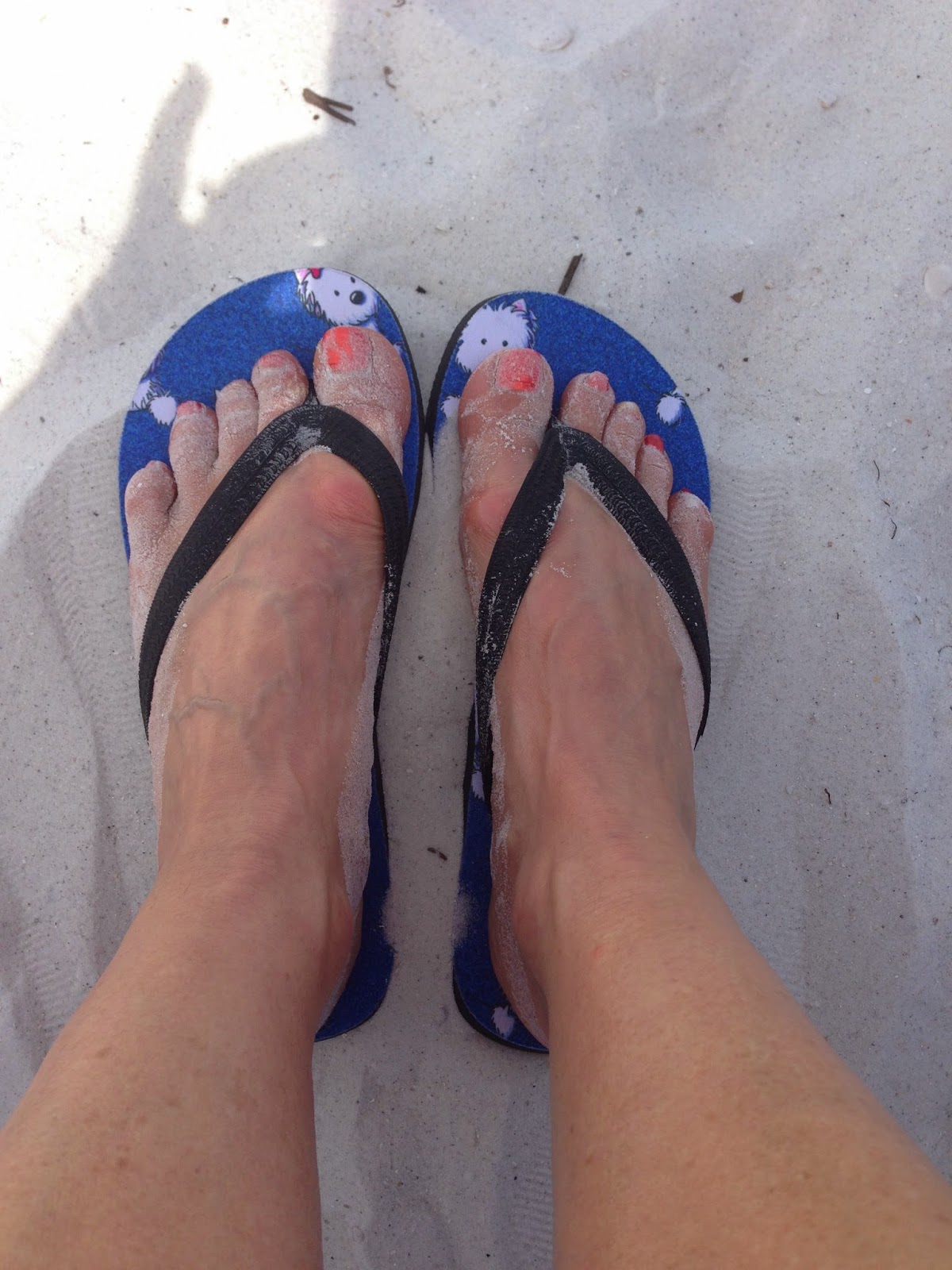 Another afternoon we use a couple of my 10 day passes to spend some time at the Safety Harbor Resort pool. I have a gin & tonic, alternating basking in the sun with lazy laps in the pool to cool off. The other guests are friendly and we strike up a few conversations with some of the people sitting on nearby deck chairs. It's fun until a woman who can only be described as a wacko starts ranting about Obamacare and how he is going to force everyone to vote. I try to ignore her but finally snap. "Listen, I'm on vacation, and really don't want to get into it with you. Your opinions are shaped by your news source. I don't agree with you and I don't want to discuss it with you." Her mouth fell open and then shut abruptly. She wandered off. I could hear her later entertaining another group with her opinions. 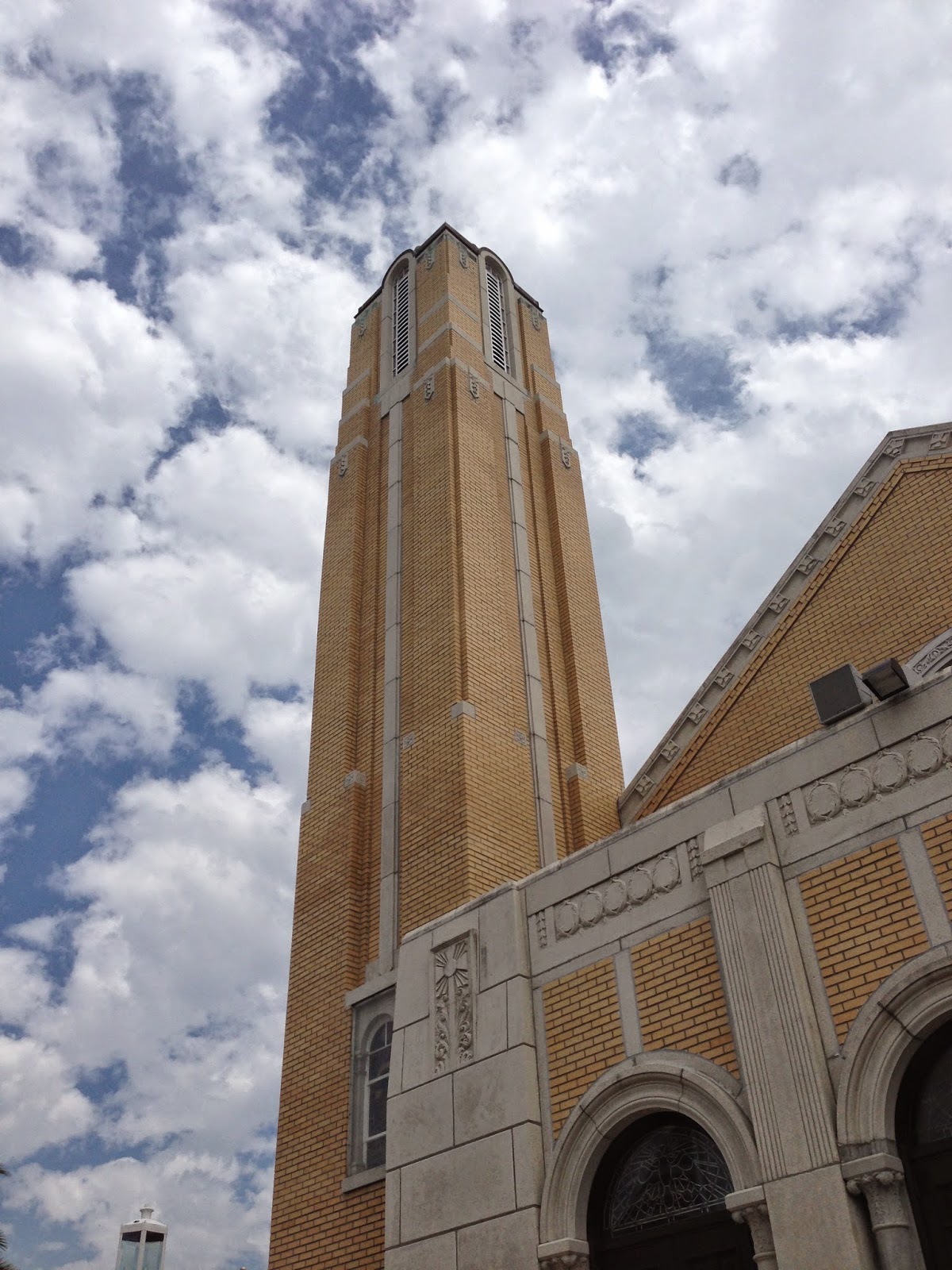 One day we decide to Drive to Tarpon Springs. It turns out to be a ratty little town with a deserted downtown and a beautiful Greek Orthodox church. The singular attraction in Tarpon Springs is supposed to be their Greek heritage and the famous sponge divers. Because of this the entire town pier has been converted to an incredibly touristy area  filled with Greek Restaurants and souvineer shops selling sponges. We were very disappointed. We wasted no time returning to Safety Harbor! 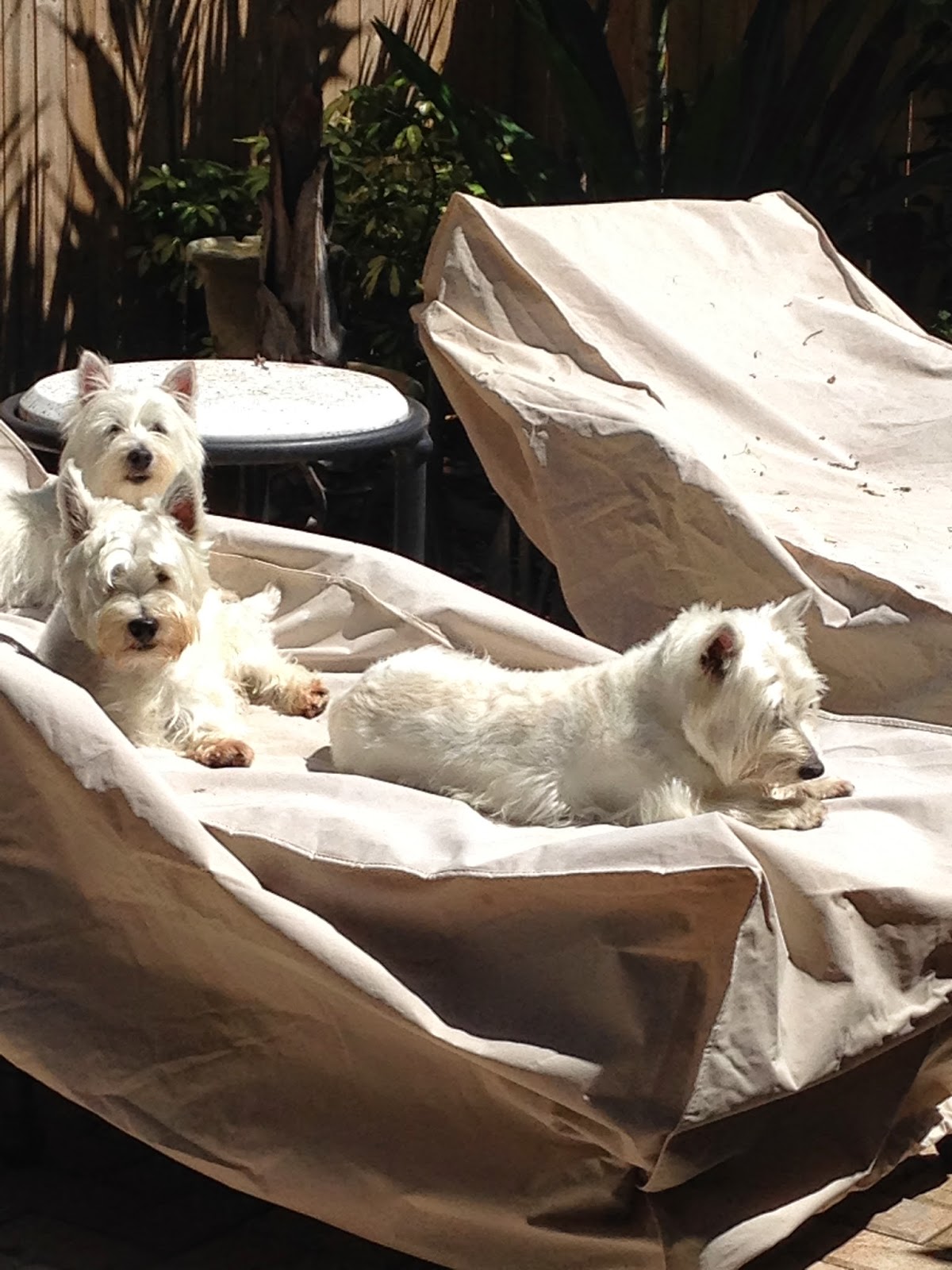 We have one more restaurant to try in Safety Harbor, Parts of Paris. This French restaurant has great food but we unluckily get lousy service. For some reason our waiter is also the bartender. He periodically forgets that he is supposed to be waiting on us instead of mixing drinks or chatting with people at the bar. We were pretty irritated because his lack of attention spoiled what would have otherwise been a very nice night. We'll give them a second chance next year however. None of the online reviews mention bad service and the food was very good. 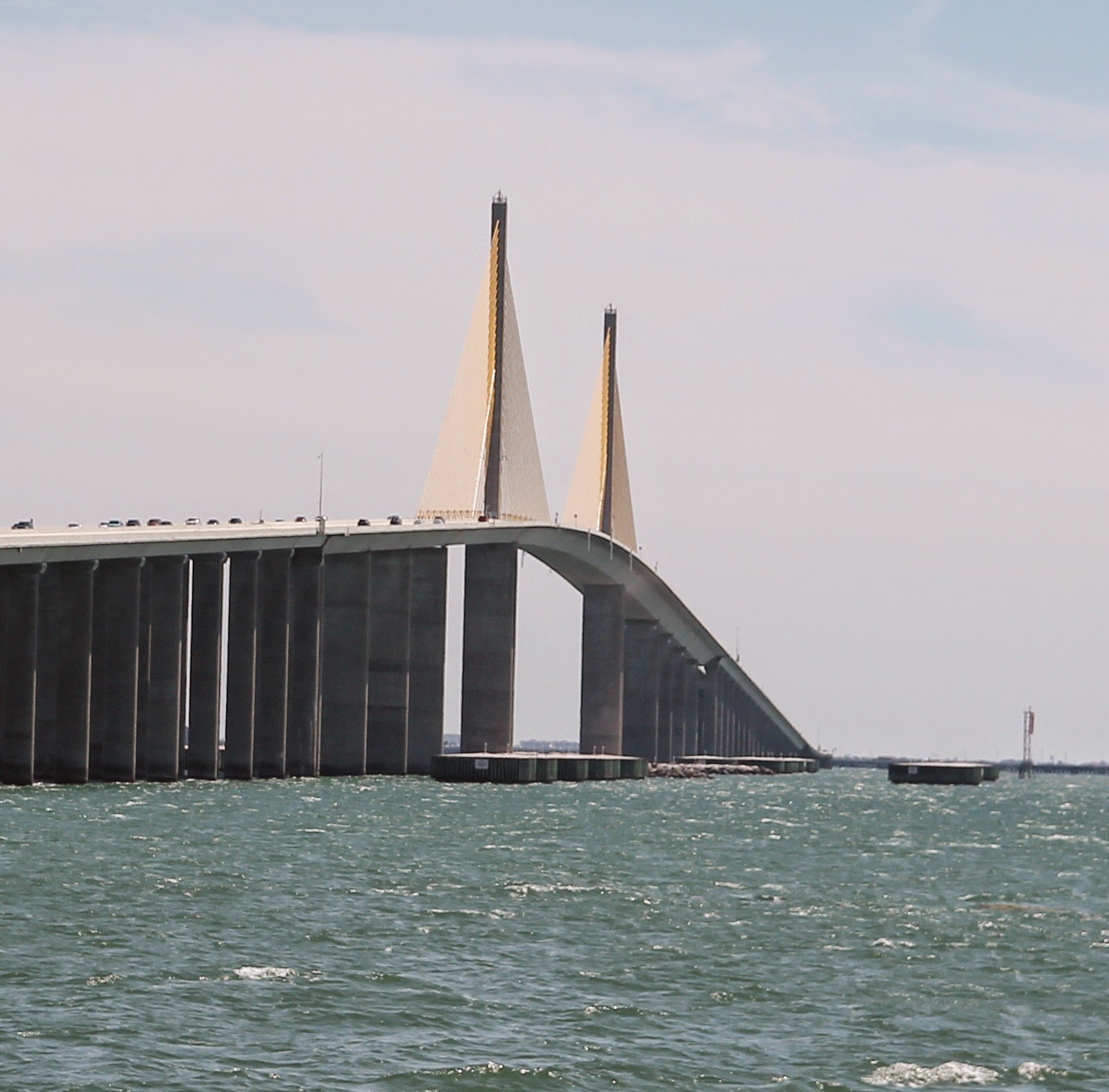 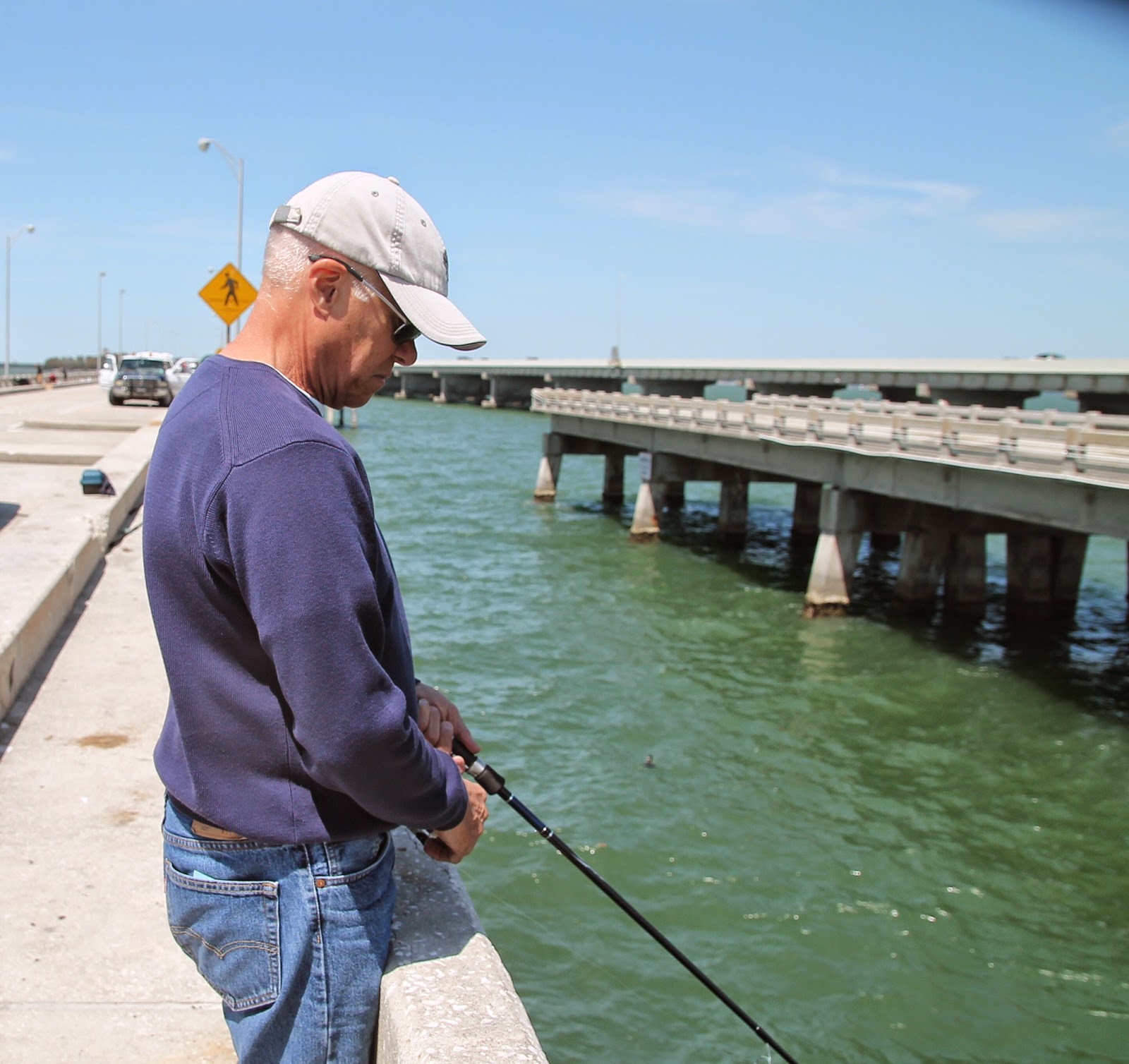 Our time in Safety Harbor is winding down. We spend an afternoon on the fishing pier at the skyway bridge near St Pete. A cool front has blown through so we are wearing pants and a sweater for the first time this month. I shoot pictures while Lee fishes but doesn't catch anything. 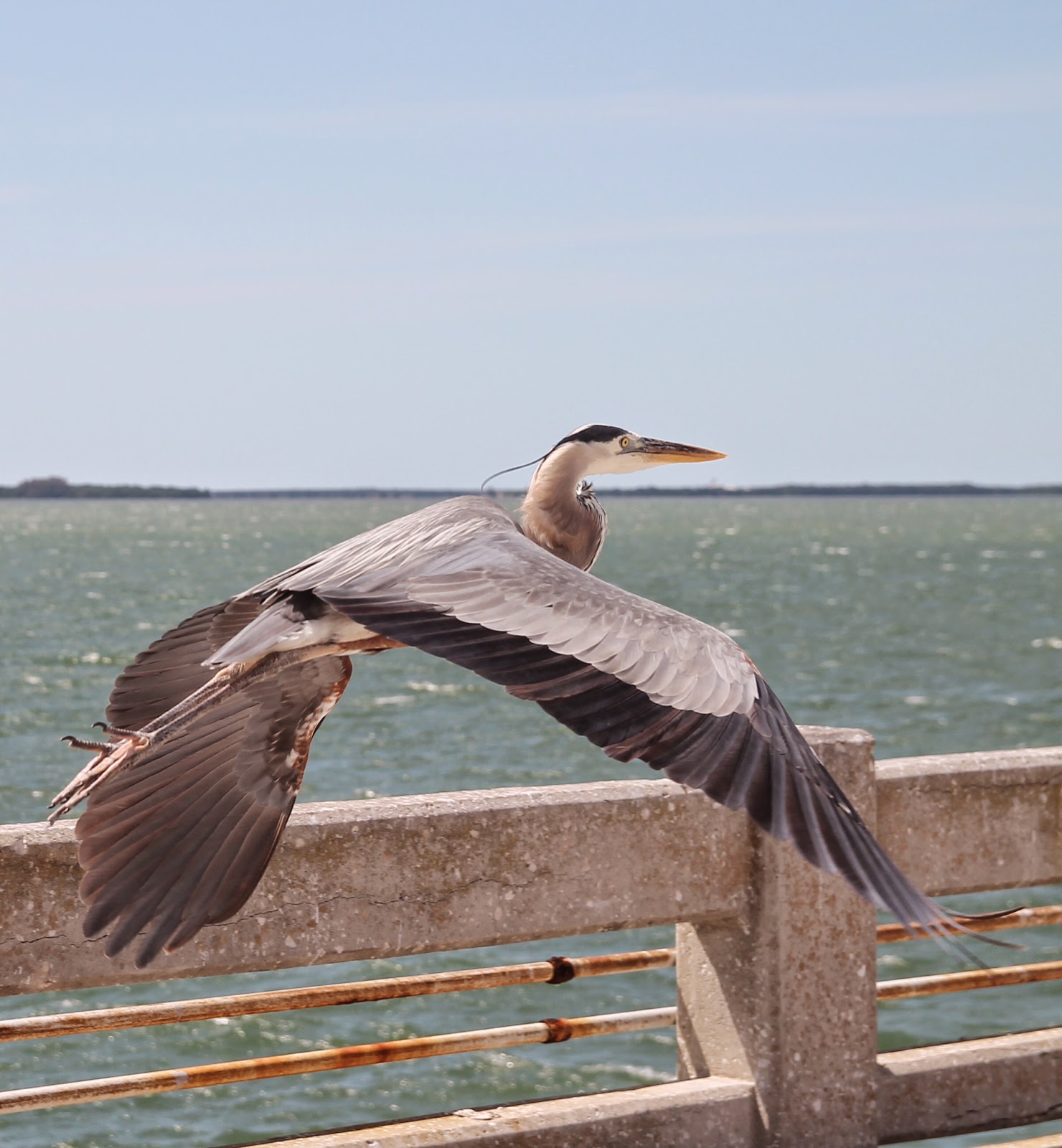 We go on a final bike ride to the Long Center and back again. We were going to go to the pool again but it's too chilly. I have two passes left on my ten day pass that we were saving, but the spa says they don't expire and we can use them next year. And we finally are able to spend an afternoon in the sun on the patio now that it is not as hot and the live oaks have finally finished vomiting crap all over the place. 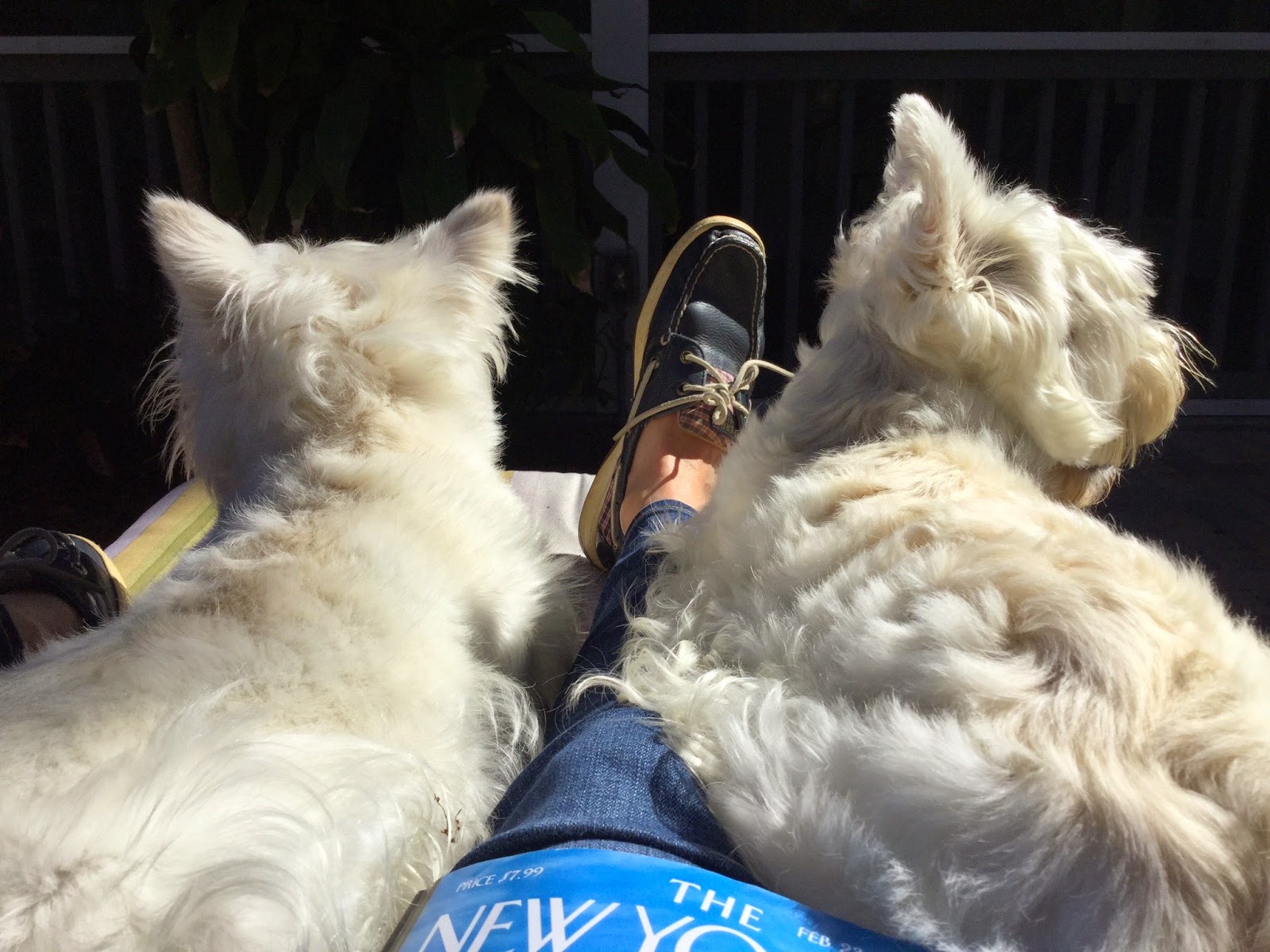 We make short work of the drive home, spending one night in Florence, SC, and one night in Baltimore at another Kimpton. In Baltimore we can take the dogs to the lounge for cocktails. They are so well behaved, I am very proud of them as little kids clamber all over them. Each dog is very patient and kind. Harper if off-leash would go make friends with everyone in the bar. Heather would lick them all to death. We are too tired and it is too late to do any adventuring in Baltimore so we just eat at the hotel restaurant, which turns out to be very good.


The last day drive is not very long and we are home by 3 that afternoon. We miss Florida! There is still 6 inches of snow in our back yard and spring seems nowhere to be found. 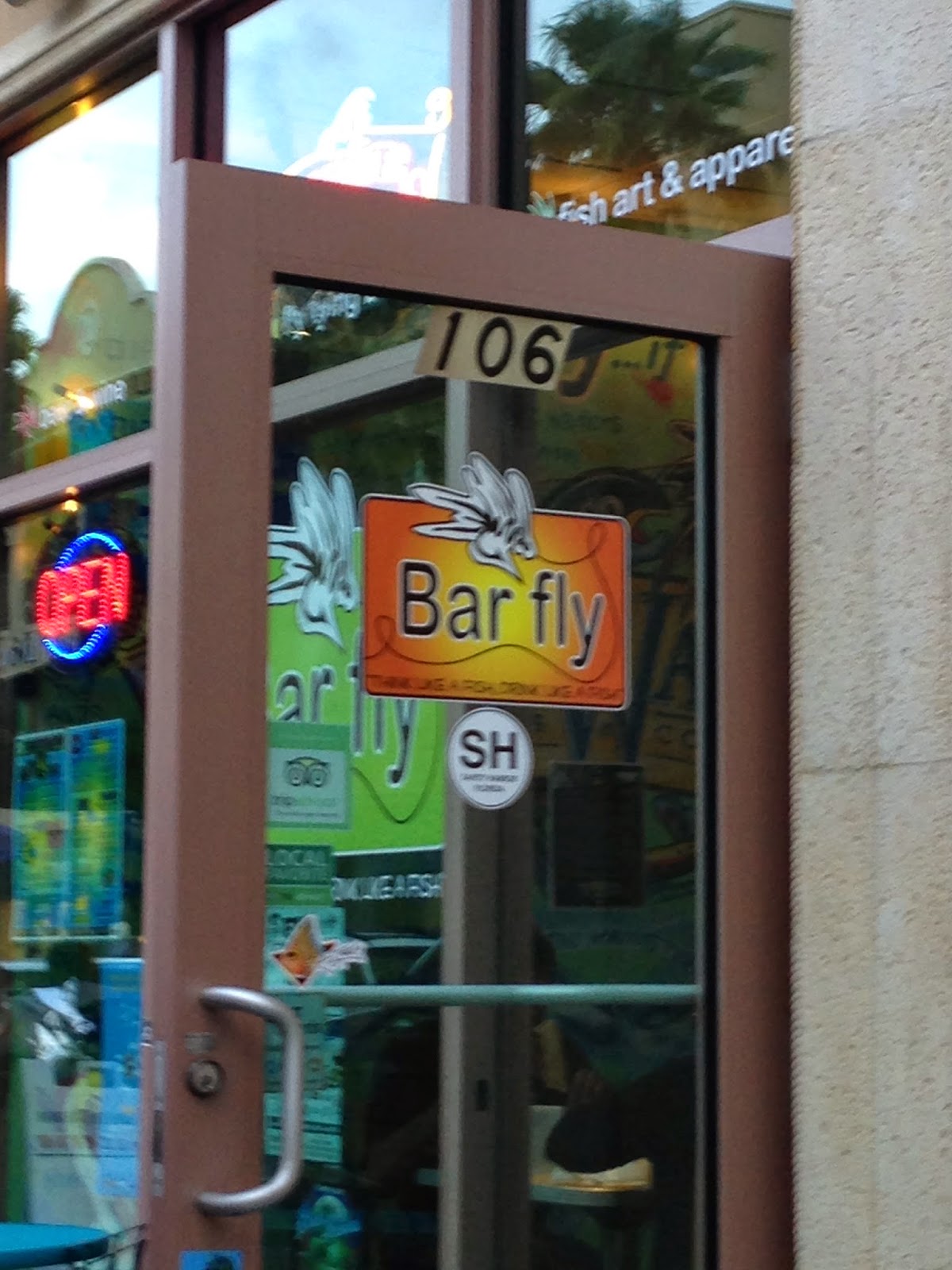