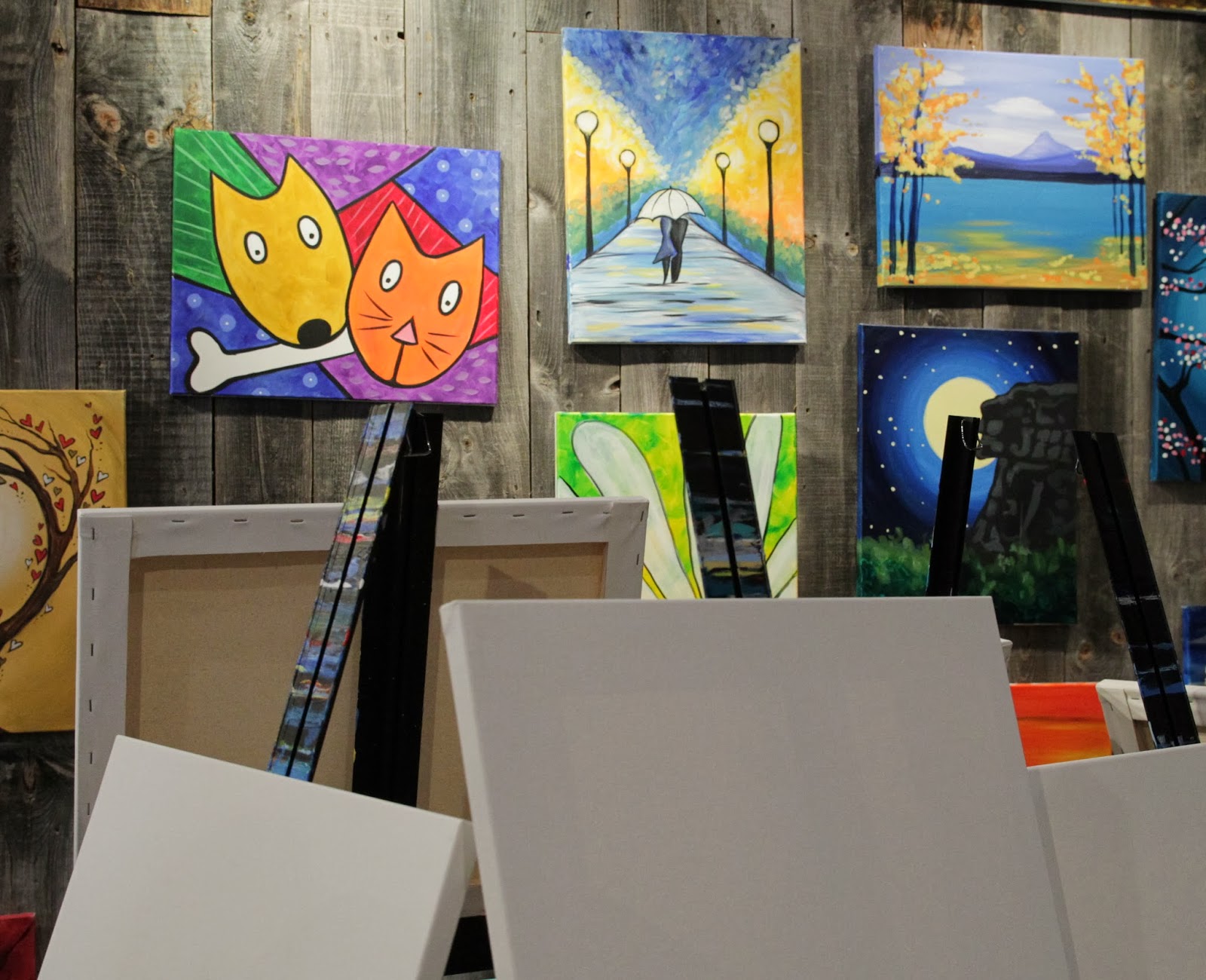 I can't draw. No really. I love art, and I admire my friends that are artists so much, but the idea of trying to represent the world around me using a pencil or a brush mystifies me. Its seems magical. How is it that those squiggly lines and brush strokes, applied in a particular way, turn into something beautiful or interesting? I trust my camera and I trust my ability with words to help me represent something I am thinking or feeling, but art?

But the latest thing to do with your friends is go to one of these places that have popped up all over and have a painting party. These "paint bars" reassuringly insist that they can show anybody how to create a piece of art, although a little alcohol doesn't hurt either.

The great group of people I have met through Diane's Westies wanted to have a painting party. We would all gather at Muse, in downtown Manchester and try our hands at painting a picture of a Westie.

Of course we weren't going to do this off the top of our heads, or get one of our dogs to model for us. Instead, we were going to take an existing picture of a Westie and try to replicate it. 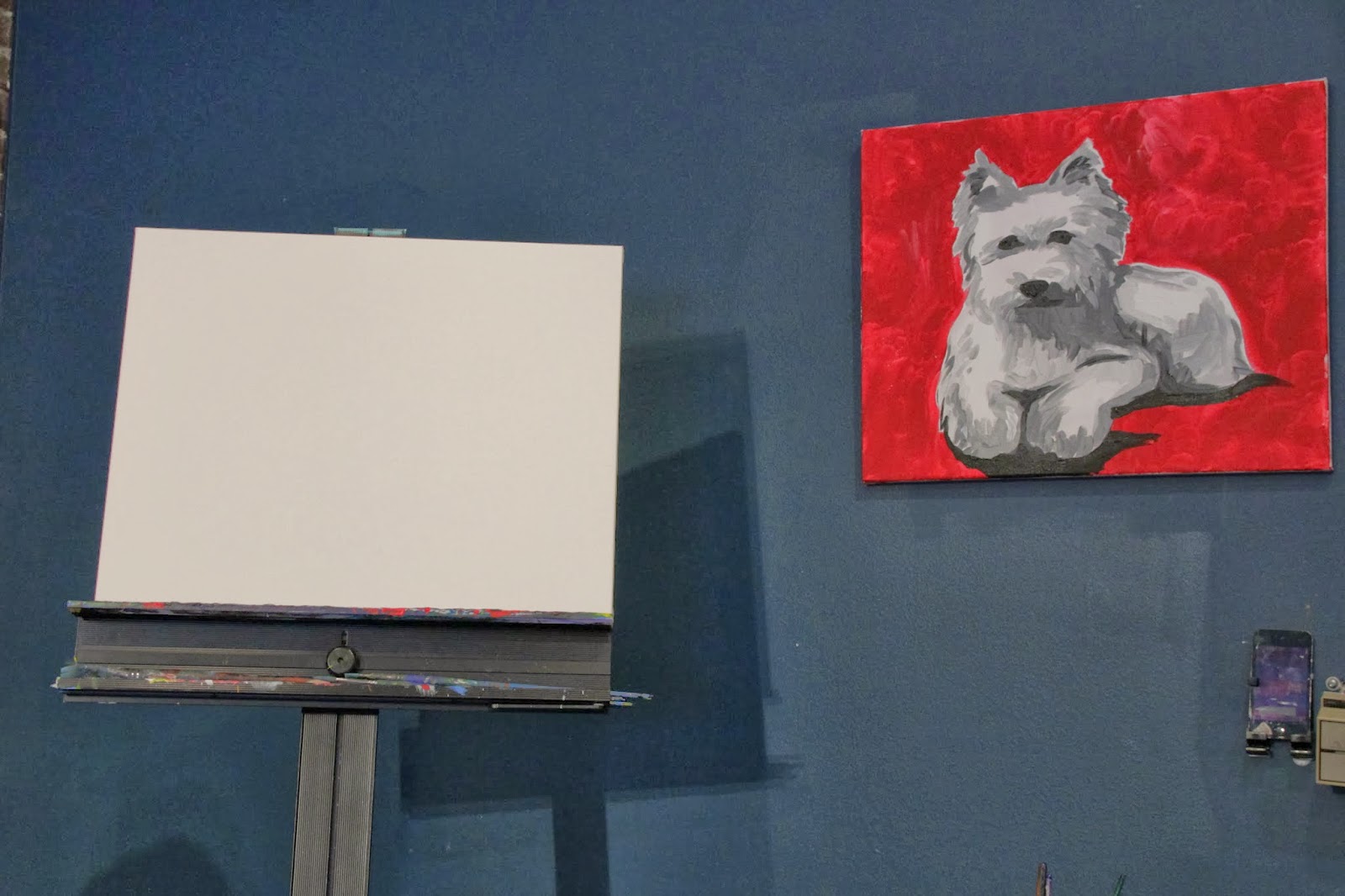 Here is the painting we started with, and a blank canvas. We painted using acrylic paints, which dry quickly so that you can paint over them. Our instructor introduced us to how to mix the paint, and which brush to use when. Then we got to work. 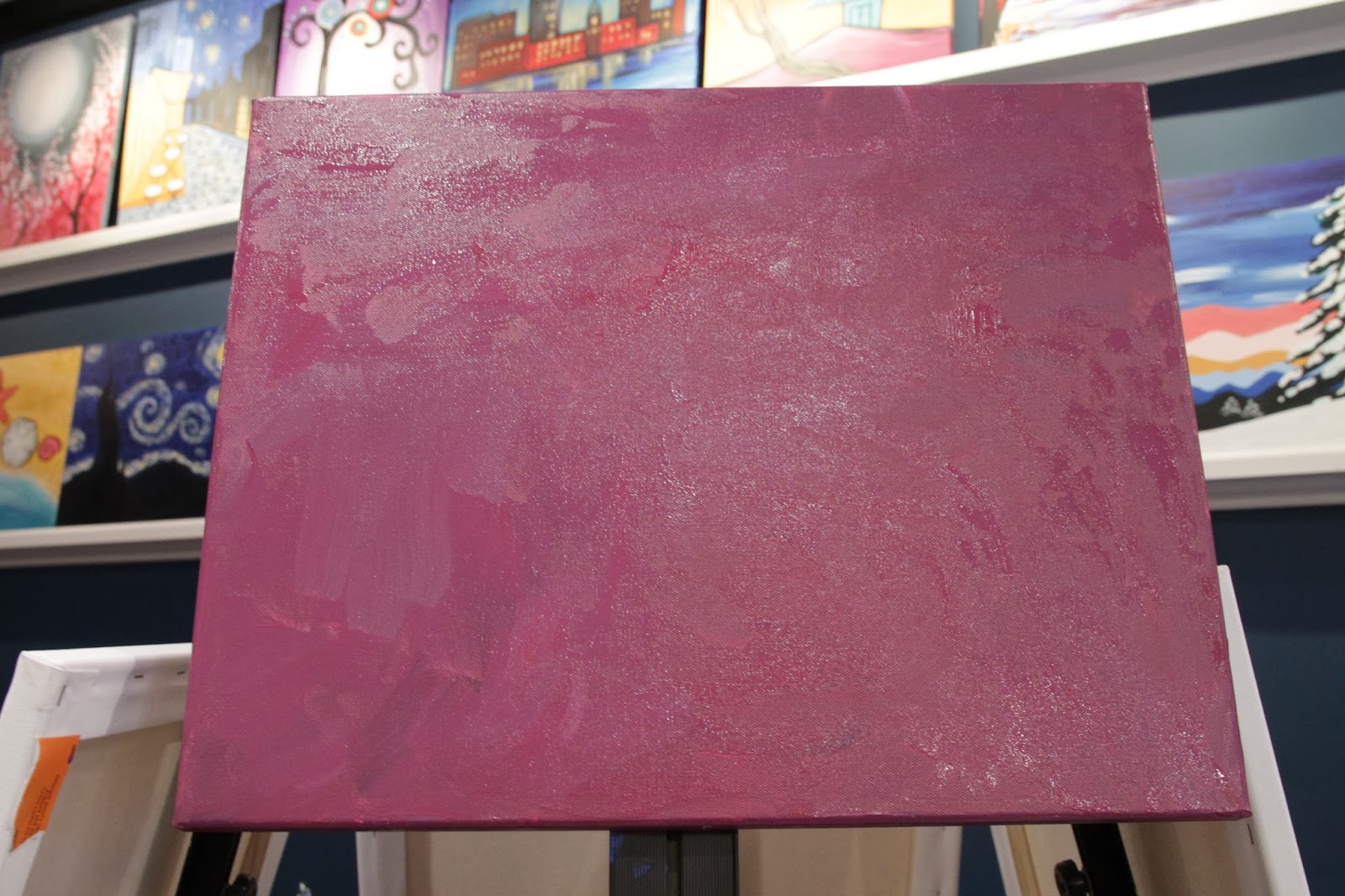 First we had to paint our canvas red. We had red paint, but we were supposed to add a little black to it so it wouldn't be too fire-enginey. I added a little too much black, and it ended up sort of purple, but I decided I liked it and left it alone. 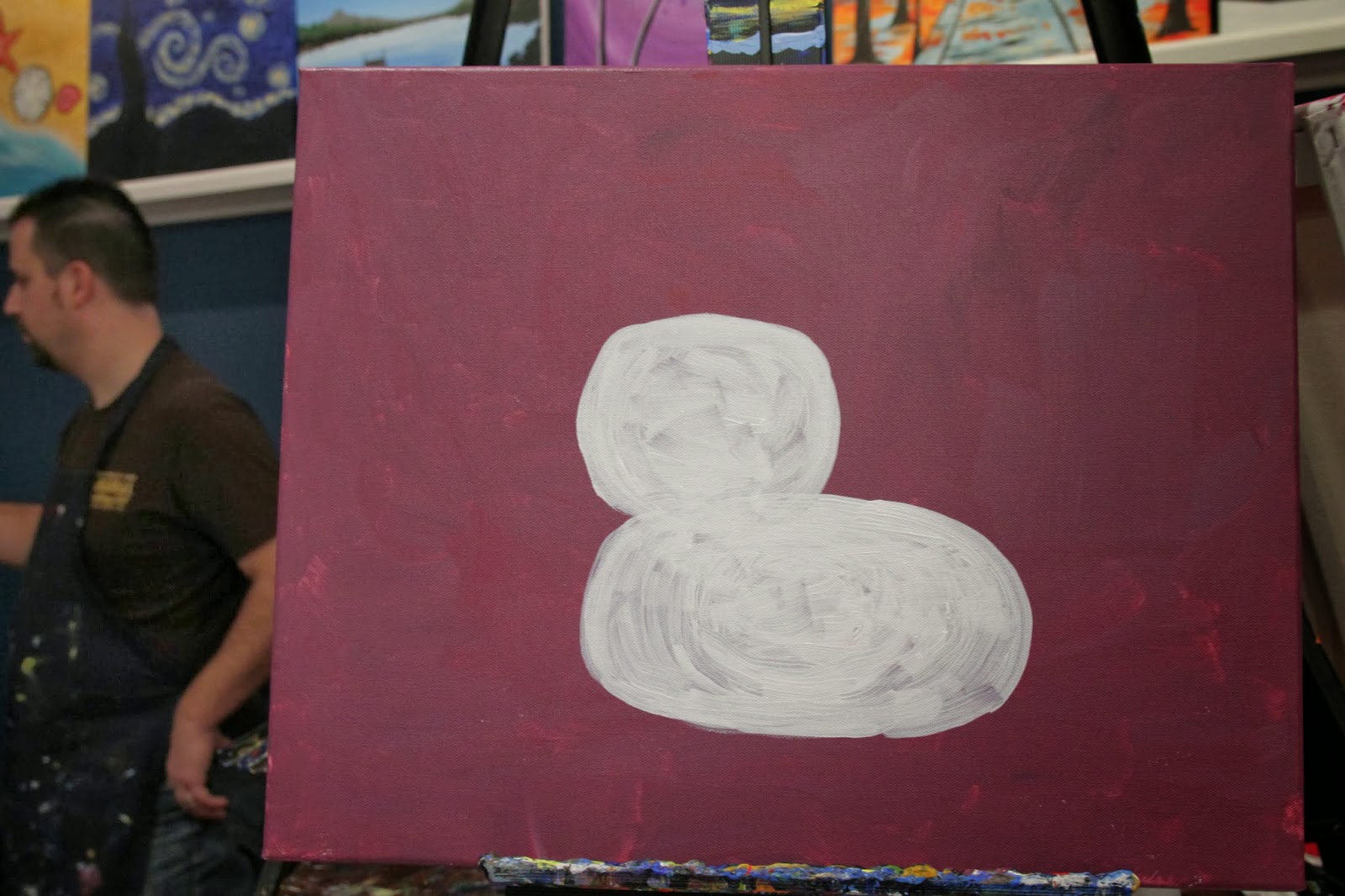 Next we were instructed to paint two ovals in white, for the Westie's head and body. At this point I was full of misgivings. I was certain this was just not going to work and I was going to end up with a picture of a duck! 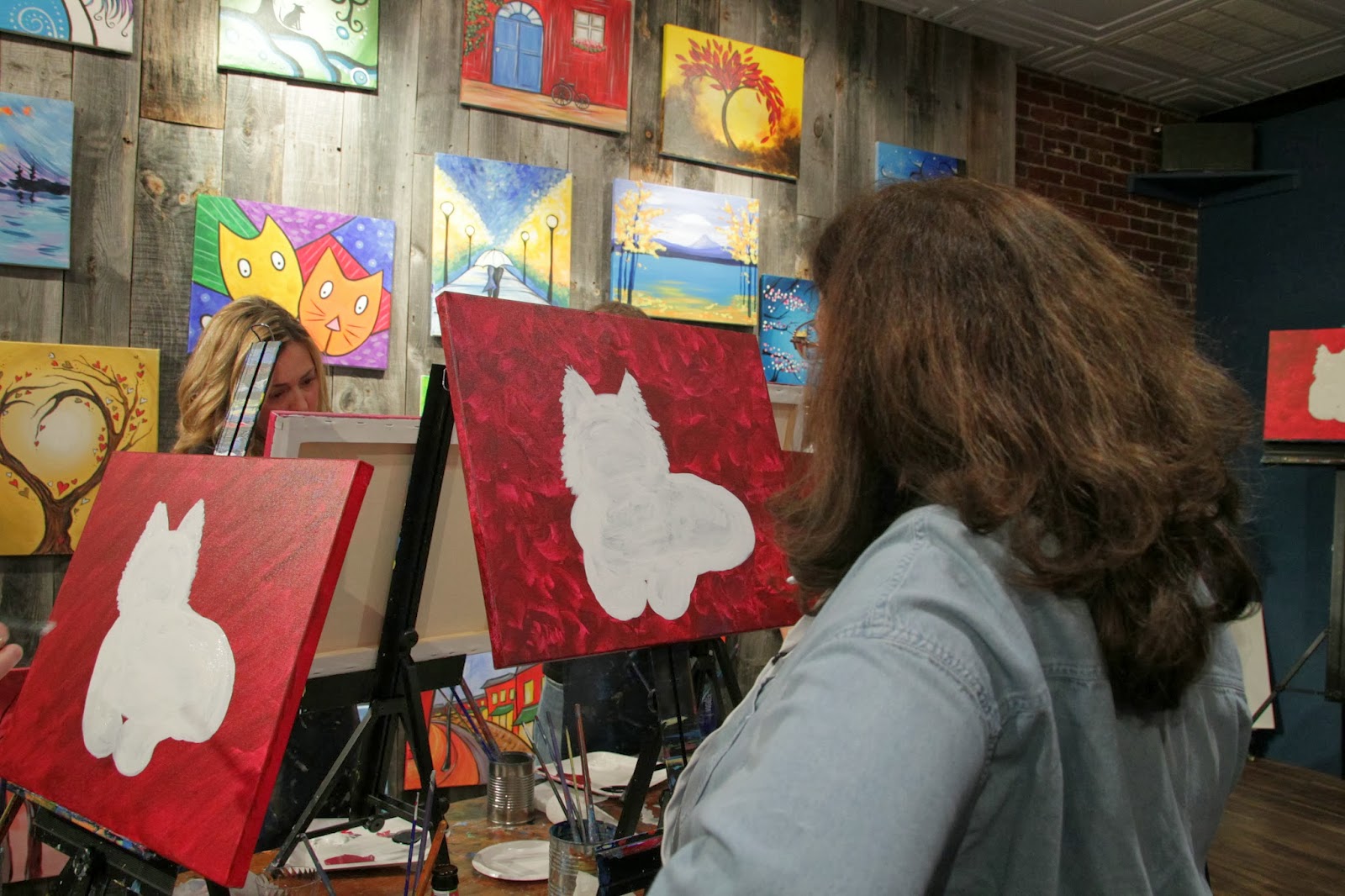 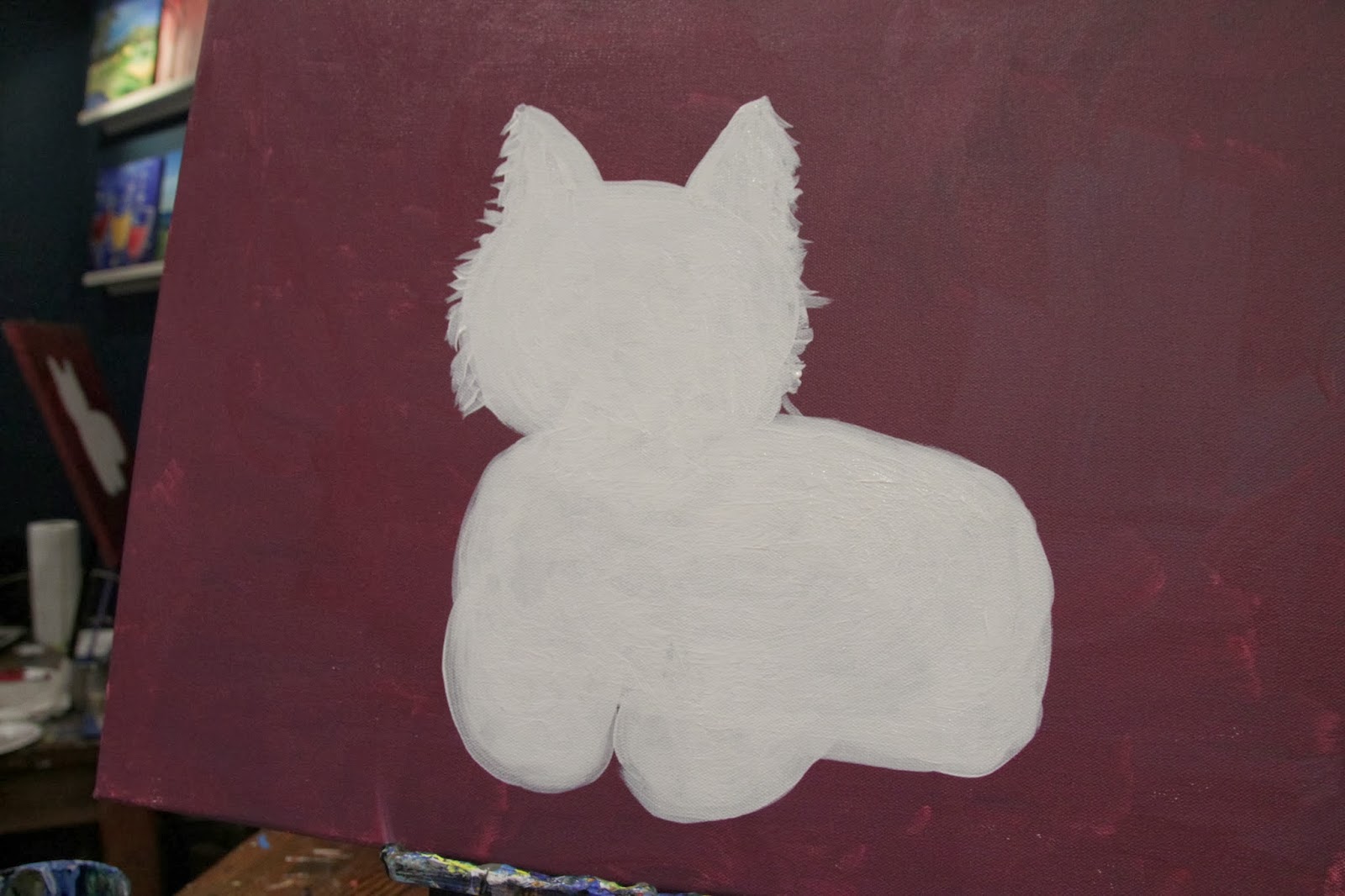 But THEN we added, paws, ears and little tufts of hair to our Westie. All of a sudden it looked like one of our dogs, sorta. 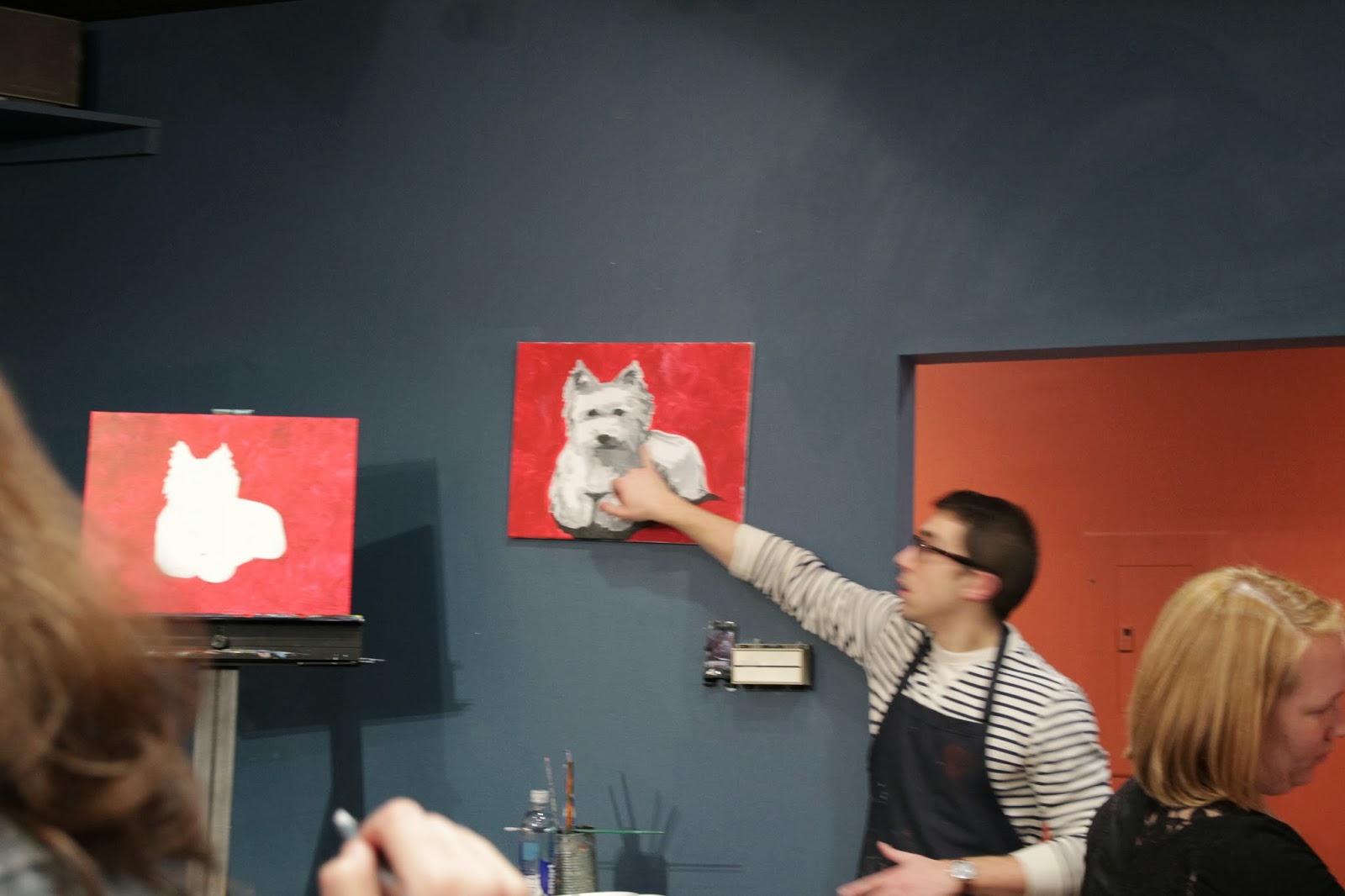 The thing that made this even halfway possible for me was our wonderful instructor. He guided us through every step of the process, and he drew along with us. So I could look not only at the finished painting but what he was doing as well. That was very helpful! 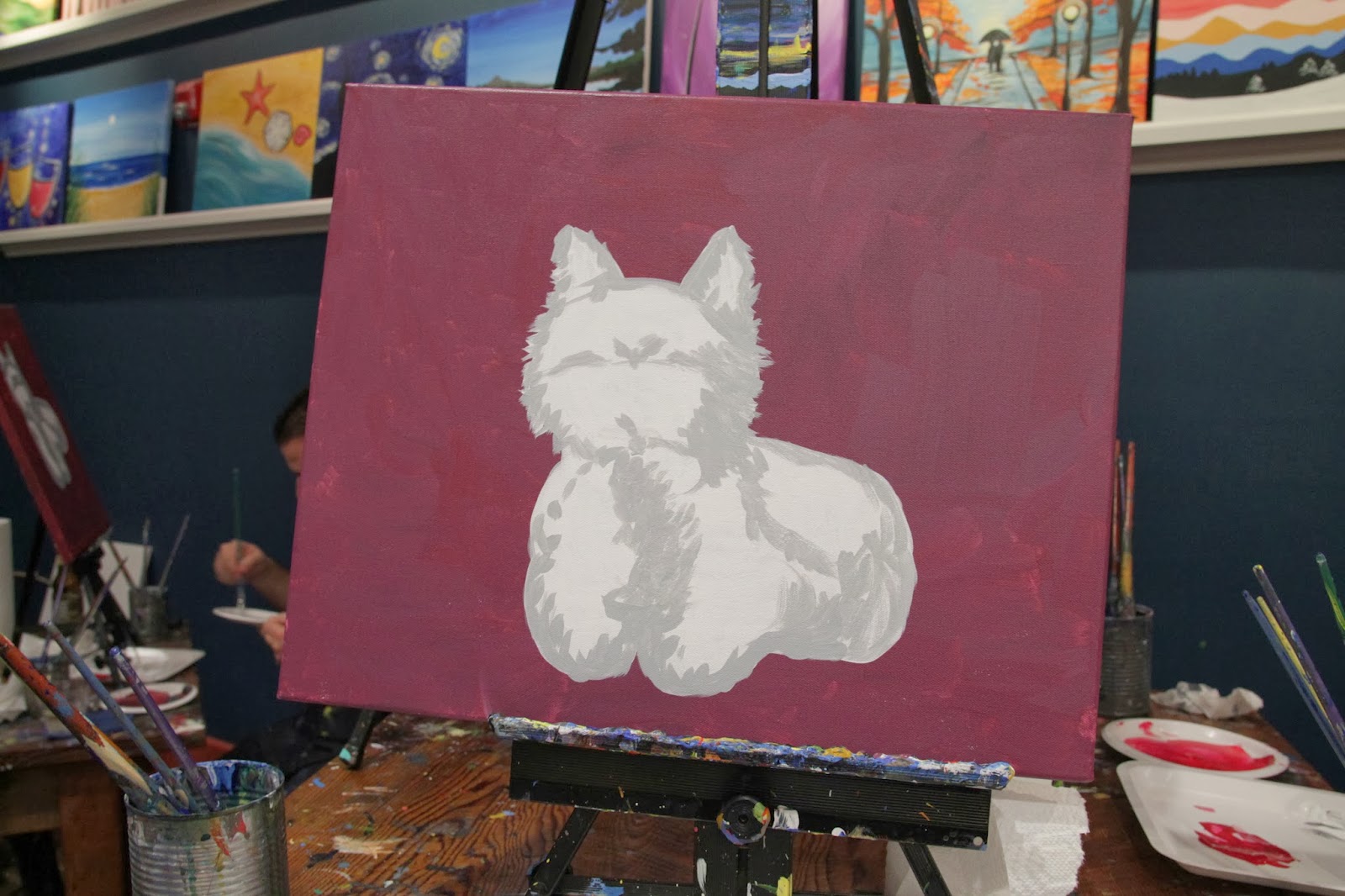 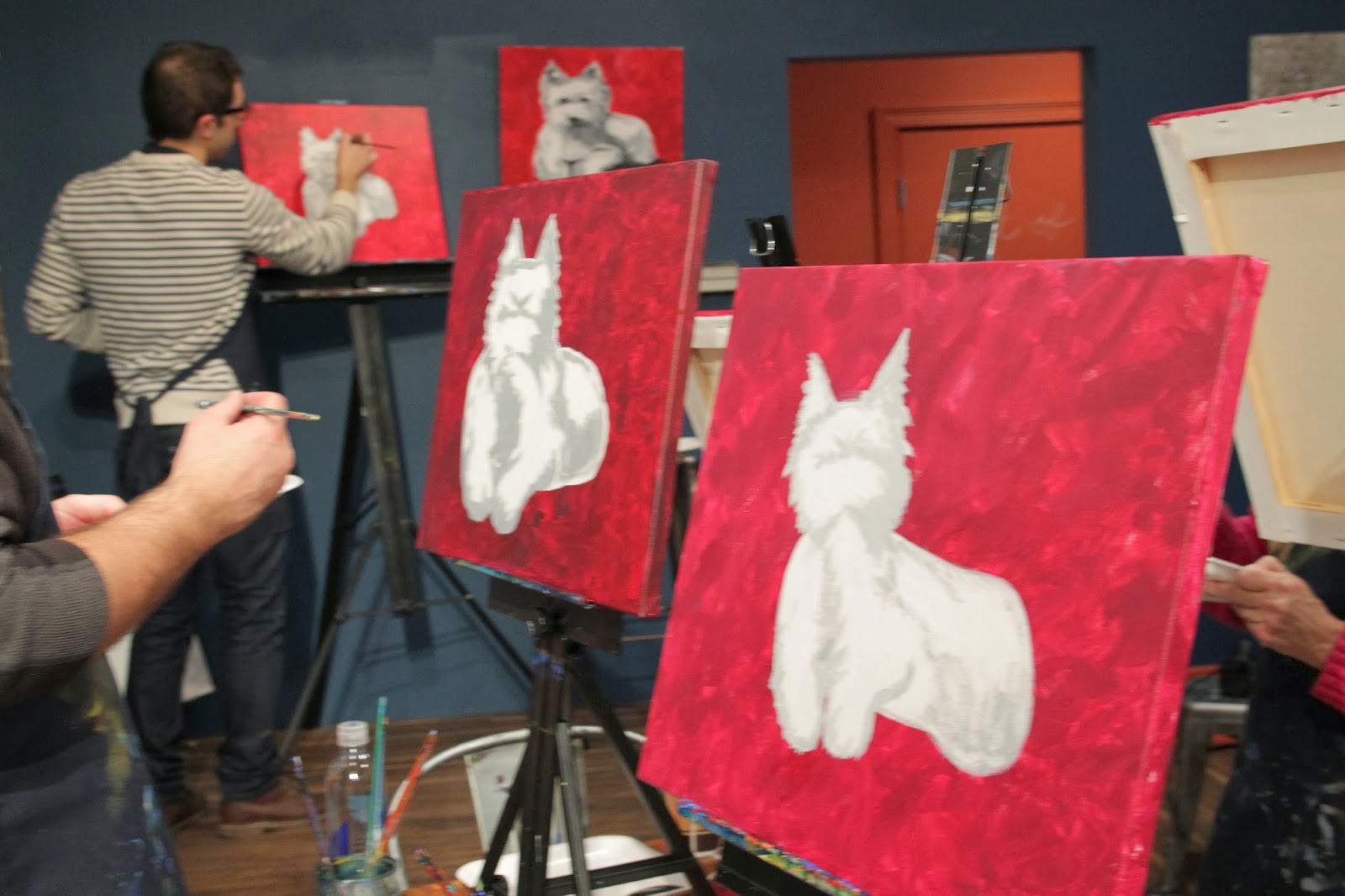 We started adding the light grey bits to our dogs. This part was hard. I took my time and added more grey little by little, the instructor giving us pointers on defining the paws, shading the ears, and where to place the eyes and nose. If we made a mistake we could paint over it with white and try again. 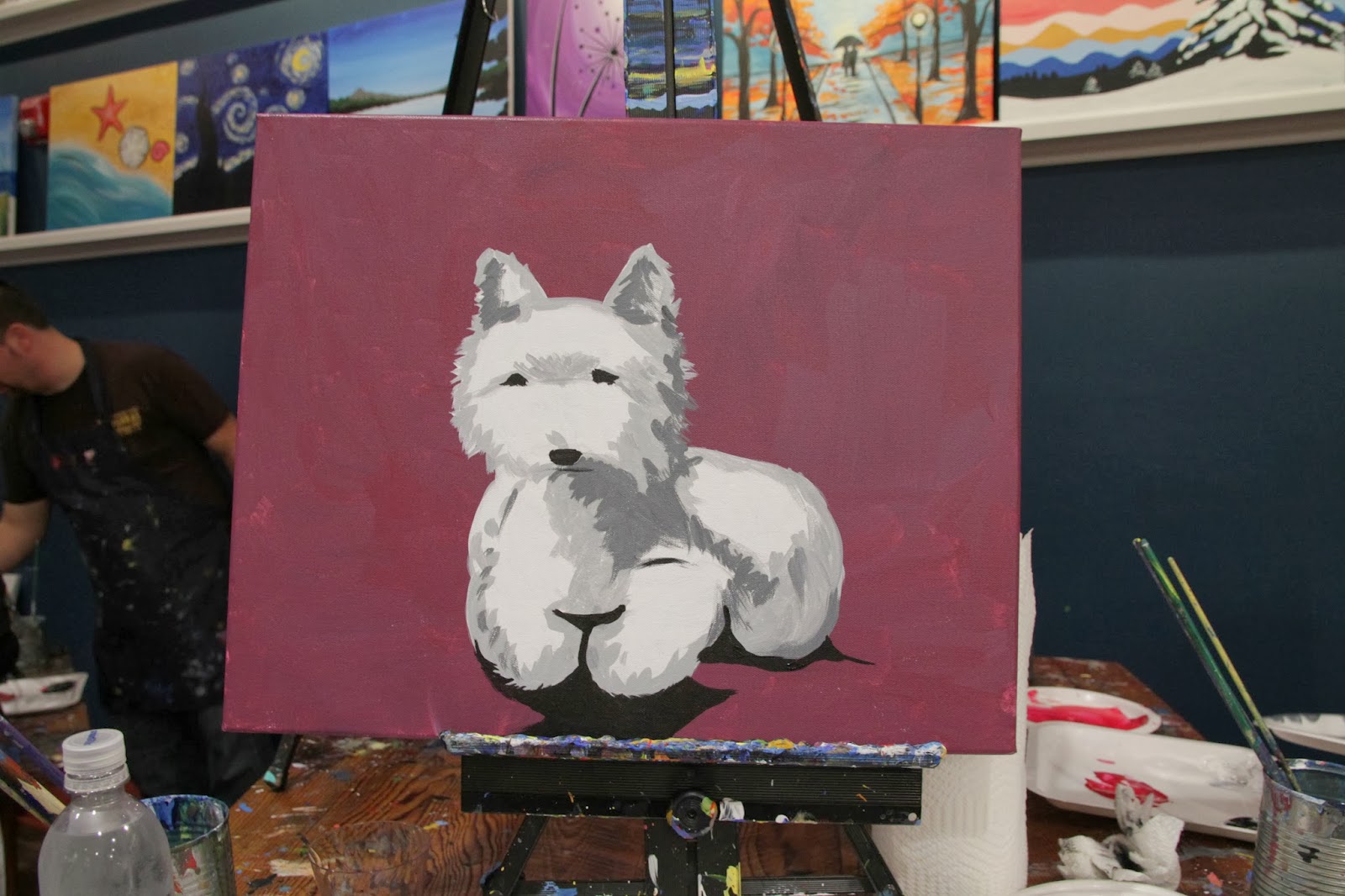 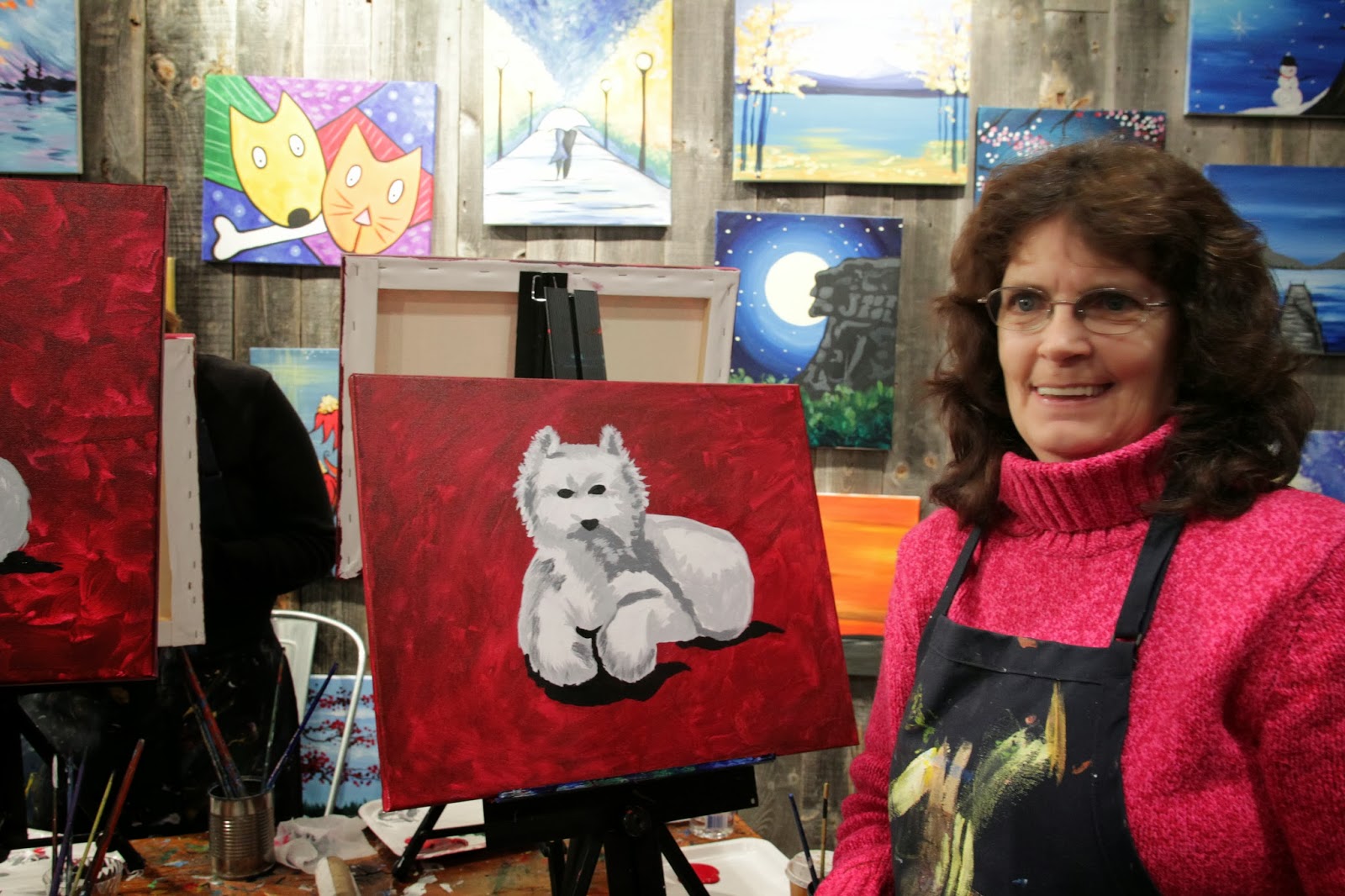 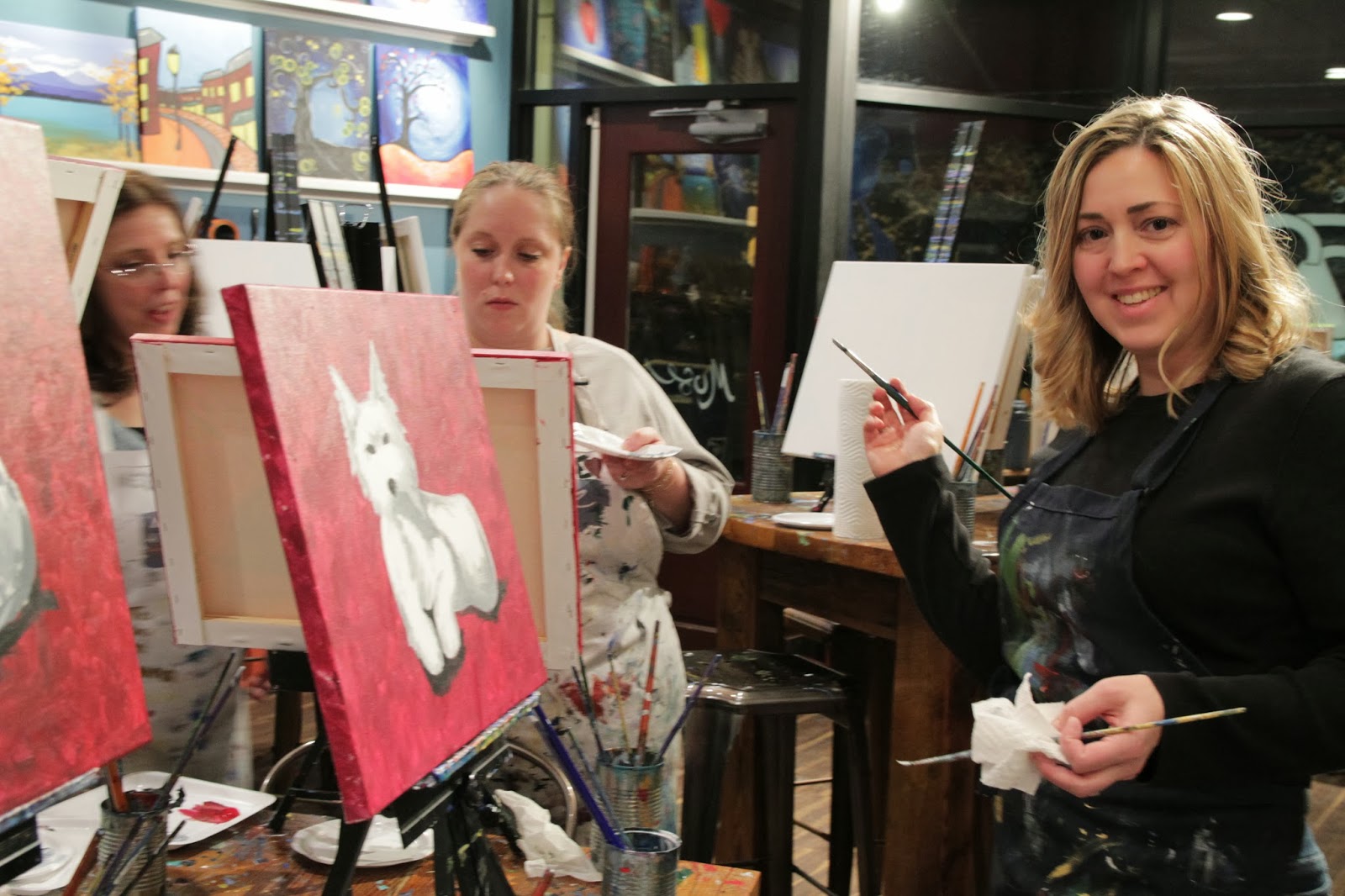 Finally we added the darker grey bits, and then the black eyes, nose and shadows around our Westie. That was it, we were finished! We were all pretty amazed at our well our paintings came out. Everyone insisted that my Westie looks like Harper. Its does, a little...


This was such a great idea. We all had fun. It was nice hanging out together without 30 Westies running madly around, or doing Agility and trying to get our little dogs to run through some tunnel! We are making plans to hang out again sometime sans doggies, maybe a Girls Night Out. Of course, half our conversations are about our dogs...they are so irresistible; we can't help it! 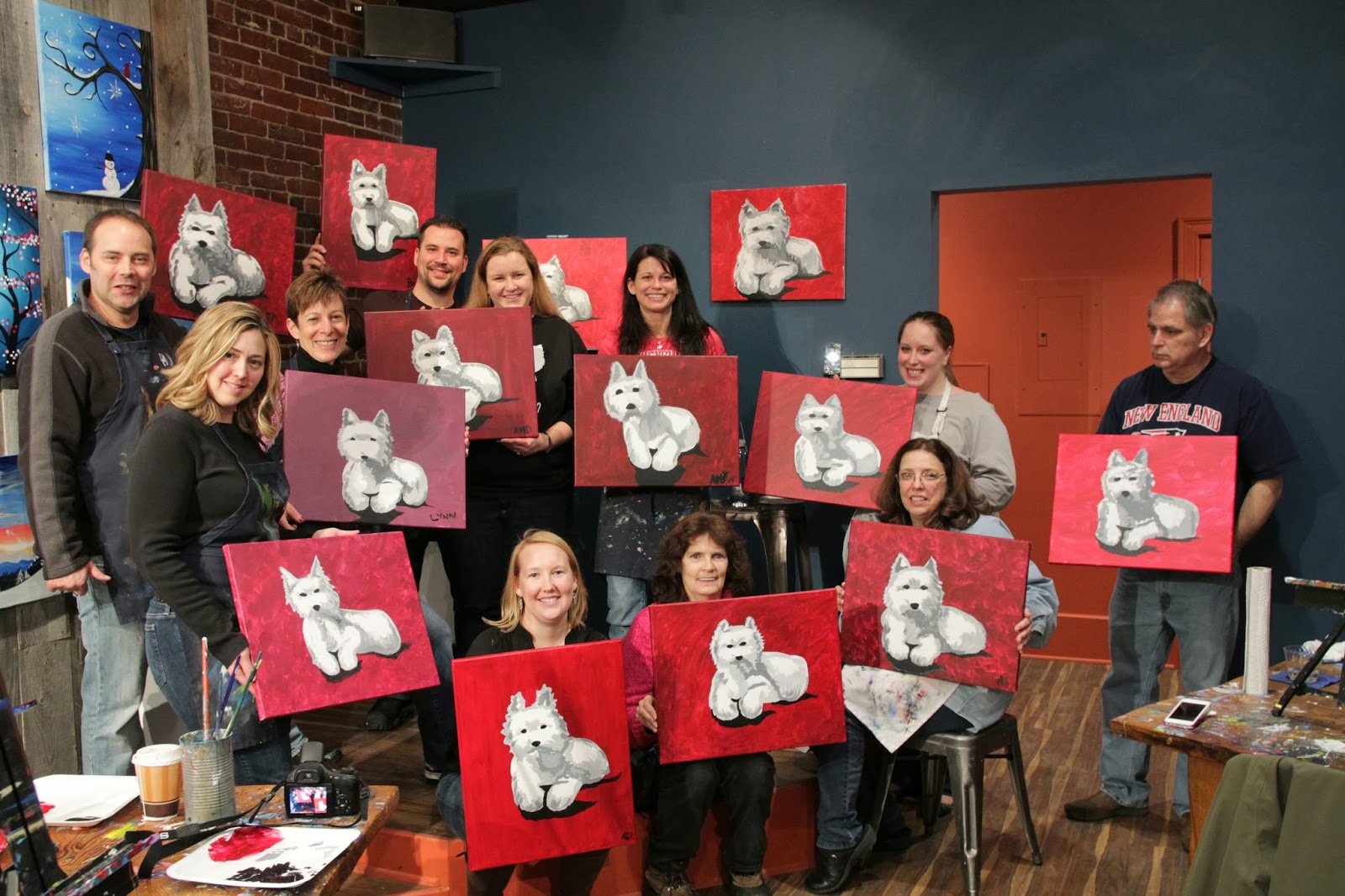 
We had a very fast winter storm that started on Saturday. It snowed 5 inches in 5 hours, big fat flakes. Then it snowed another inch that night, and a little bit more Sunday morning. This was a wet, heavy snowstorm. I shoveled what I could, and our intermittent plow guy came sometime Saturday evening. Unfortunately since it snowed again Sunday morning and he hasn't come back, our driveway is a bit of a snow-covered mess. But I can get the car out, so its okay. 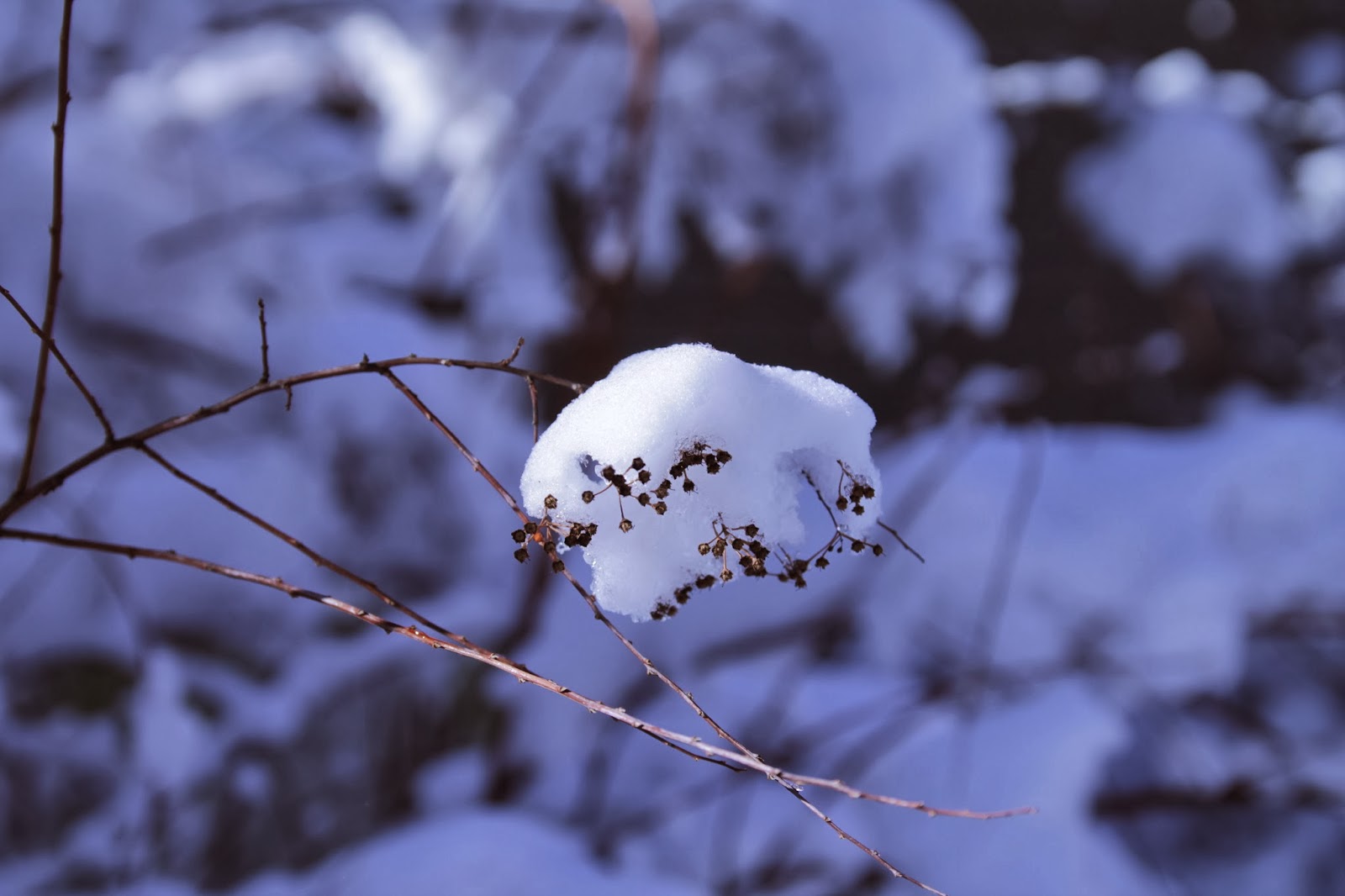 This heavy snow has been draping itself over things in all sort of interesting shapes, so this morning, in between picking snow balls off dogs and packing for St. Louis I took my camera outside and got some nice pictures. Its sort of fun to take these snow pictures, remembering what these same plants looked like in the green of summer!

A Maybe Blizzard, a New Fitness Device, and a Riveting Book

No, these three topics have nothing to do with one another, but they are what is currently on my mind, and when has a trio of non sequiturs ever stopped me? I'm sure I can figure out a way to make all three of these topics flow nicely from one into the other.

We are in the midst of one of those weather events that could be a big deal or could end up petering out into nothing much at all. The National Weather Service has been predicting a major storm for several days. Eight to Twelve inches! Blizzard-like Conditions! Blowing and Drifting Snow! Dangerously Cold Temperatures! 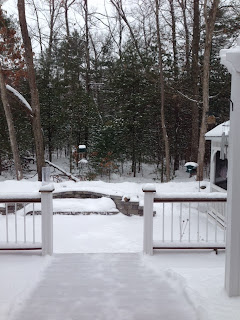 So far none of this has really come to fruition, but give it time. It started snowing early this morning, a fine, soft snow. We had two inches at 7 am, and now at 3 pm we might have three or four. But it is supposed to snow all night and much of tomorrow, so we could still end up with a lot.

So far the winds don't seem to be too bad. I actually went for a run this morning and I've definitely run in worse weather.

The cold on the other hand, seems to be a winner. It was 15 degrees F at 7 am, and that was the high for the day. Now at 3 pm its 7 and that is predicted to get much much worse tonight.

I do still like exciting weather, but I don't like cleaning ice and snow off of little dogs, or shoveling. But a big ole storm with howling winds would be kind of fun, as long as all of our trees stay where they are supposed to!

Speaking of exercising in cold weather (told ya I could join these topics together!), Sarah gave me a Fitbit. Her work had given her one and she didn't want it, so she gave it to me. A Fitbit is a glorified pedometer that will upload your steps, calories and miles to an app on your phone or your Mac or PC whenever you are close to that device. You can wear it inobtrusively on a bra or your pocket. The fancier ones will even monitor your sleep! The thing I'm discovering is that without my running I'm not all that active. Since I'm retired I don't need to walk from a car to my workplace, or walk around at my job. I have to be more purposeful about getting exercise. I'm trying to get to at least 10,000 steps a day and even with a short run in the morning I don't always make it. So like today when the weather is bad and the dogs probably won't get a walk I'm going to be short about a 1000 steps. It makes me want to go pace around in the basement or something. Now, I could start cleaning the house today, and that probably would help, but nah, I think I'll put that off until tomorrow. It does help me understand why my weight has been going up a bit lately. I especially like the fact that I can just glance at my phone occasionally and see how many steps I have for the day. Its fun! 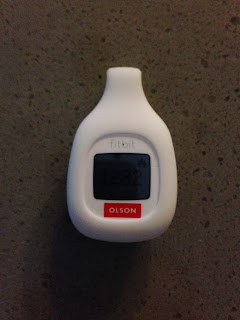 Well, with all this bad weather, its a good time to get totally lost in a good book. Donna Tartt's The Goldfinch is exactly that. I'm about 2/3rds of the way through. I started it maybe three days ago, and its 700 pages long, so that gives you some idea how hard it is for me to put down. I don't want to give the plot away, but there is enough urgency to the events that I have a hard time staying away from it for very long. I love Donna Tartt. Her first book, A Secret History, is one of my all time favorites. She only writes about one book every ten years, and I literally have been waiting for this new one about that long.

Although The Goldfinch is listed as one of the top ten books of the year by the New York Times, not everyone has enjoyed it. My friend Christine, a fellow obsessive reader, was disappointed. The New Yorker thought it was overdone and over the top. But I am enthralled. I love her imperfect protagonist, the Dickensian references, the motley cast of characters, the intense sense of urgency as the story hurtles to a close. Do I think it is as good as The Secret History? I'm not sure at this point; I'll have to see how she handles the conclusion. It would be easy to go off the deep end and have something crazy or stupid happen. I'm expecting something good, or even great; I hope I'm not disappointed! 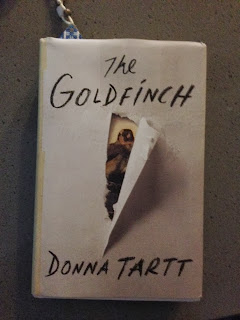 So that's it for this snowy New Hampshire afternoon. The doggies are napping, Lee is busy in his office and the light is slowly failing. As I look out the window, quiet flakes of snow are drifting down. The cold is increasing but so far at least the winds are holding off. But its only the second of January. There is plenty of time for some real winter weather here in New England.