A Baby Shower for Sarah 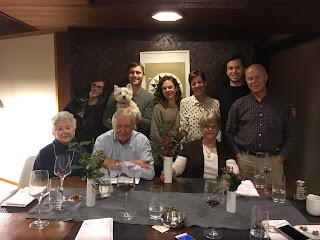 We went  to Minny for thanksgiving this year. This trip included several days of house and land hunting, as we are in the process of making a move to Minneapolis sometime this coming year. As of this blog post there was nothing definite yet; that’s a topic for another time.

We all helped Sarah and Erik get ready for turkey day. I made 3 pies and the rollls. I made the rolls in muffin tins this year and that worked much better than the 9x13 pan I used last year. Cherry, bourbon pecan and vegan pumpkin. We had SO much food: stuffing, mashed potatoes, green beans, turkey, rice pudding, cranberries, relish tray, and little cheese balls shaped like turkeys (cute!). 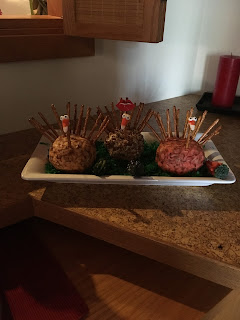 Saturday was the day of the baby shower. Lots of Erik’s cousins and aunts came, as well as Joanne, Cathy, Nicole, Harrison, and Nicole’s grandma Pat. I was in charge of cupcakes so earlier in the morning went to get them at Salty Tart. I remembered to get vegan ones but not gluten free, but Suzanne found some gluten free ones at another bakery.

While we were at the shower the guys took the shelves down in the nursery, spackled and sanded the walls and got them ready to paint.

The shower was held at Kris’s house which is teeny but it worked. She did such cute decorations. The theme was children’s books, so people brought books instead of cards. Somehow that detail escaped me so I ran out and bought some on Friday. Joanne missed this point too, so they ordered a book for her to give on amazon prime that came Saturday morning. Unfortunately it was a book Sarah already had, but since I had bought two books that didn’t matter, I let Joanne use one of mine instead. 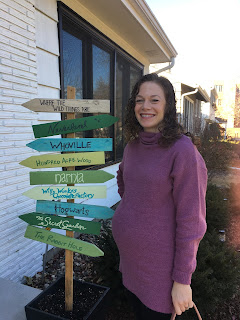 Kris had a sign out front pointing to different children’s book locations. The rabbit hole sign kept shifting upward. Inside she had hung little miniaturized facsimiles  of various book covers from strings all over her house. In the bathroom the books were potty books like “Everybody Poops”. She had asked Suzanne and I for pictures of Sarah and Erik reading as children, and those pictures were displayed as well.

The guests had the opportunity to get their pictures taken with crowns and signs.

We played some shower games. The first game involved placing a paper plate on your forehead and drawing a picture of what you thought the baby would look like. Then Sarah had to pick the one she thought was best and that person won. However nobody told Sarah that we hadn’t been able to look while we drew and she really wondered about our artistic skills! The next game involved a list of various statements that were either about Sarah or Erik as children and everyone had to guess which child each statement was about. Erik’s aunt Jackie got every one correct, so she won that game.

Then we ate some snacks, and then it was time for Sarah to open presents. There were a lot of experienced moms in this group and Sarah got a lot of really great cute and practical gifts. She was especially excited by the number of diapers she got. A few gifts really stood out for me because they were hand made. Suzanne’s blue and white knitted afghan. Joanne’s little knitted booties. Cathy’s adorable knitted sweater with little wooden duck buttons. I gave her the quilt I made and she likes it. It matches the mobile that she made!

Then we ate cupcakes and ice cream and then it was time to go.

We met Nic, Tom, Tim, Pat, Lee, Daniel and Erik for dinner at a place called the Low Brow. Poor little Harrison was so tired, but we passed him around and he slept off and on. At three months he was easier to hold than he was at 2 months. he’s just a really big baby, he’s already in 9 month clothes! My arms get tired holding him!

It was a very nice shower and a very long day. We were all very tired by the end of it all. Now it’s time for Lee and I to return to NH and decide if we want to make an offer on the lot in Excelsior, or not.... 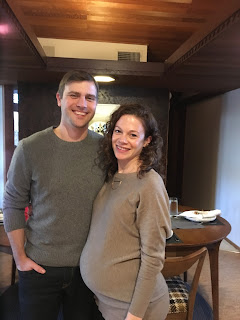