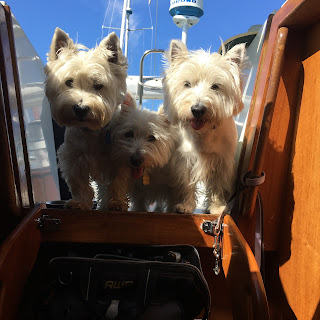 The next day its time to make it through the canal and down Buzzard’s Bay to South Dartmouth where our friends Doug and Sally will be joining us for the next 6 days. We wait until 10 AM to start so the current flowing against us isn't too strong, but even so we are just barely chugging along. It's fun though, going through a canal, under bridges, watching the other boats, listening to the VHF Radio  traffic. 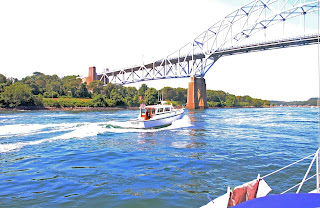 It takes us several hours to get through the canal. Then its very long haul down Buzzard’s Bay. We are going directly into the wind, again. It's not nearly as bad as yesterday but it's still choppy with 2-3 foot swells. We finally get to darling South Dartmouth around 5:30 PM and meet up with our friends, who have been waiting for us patiently. It's beastly hot. I take the dogs for a walk and even though they have been on the boat all day they are less than enthusiastic.

Later we go into town for dinner. When we come out of the restaurant it's pouring rain, thundering and lightening! Shit! We left the boat wide open because it was so hot. We head back in the dinghy. The floor is flooded, the charts that we left on the table are wet, but they will dry. Charts are waterproof thank goodness! But Sally and Doug's quilt on their bed is wet on one corner. Fortunately it's so hot they don't need it and it dries overnight. 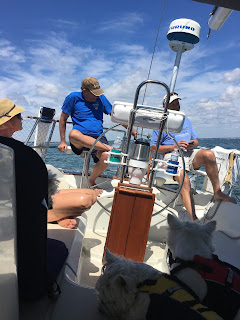 Today is our first day to sail with Sally and Doug. We follow a  close haul course across Buzzard’s Bay, which means we’re traveling at an angle to the wind. Its a much different trip from five years ago  when fog socked us in completely and we had to feel our way into the harbor. Today Cuttyhunk is bright and sunny. We go ashore, take a walk around the little island. 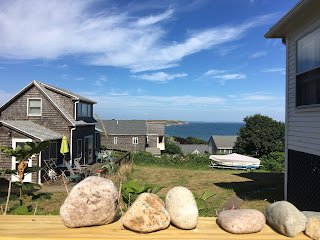 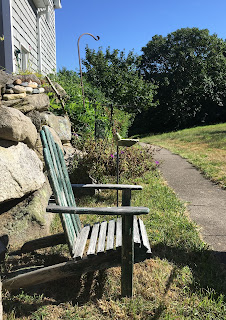 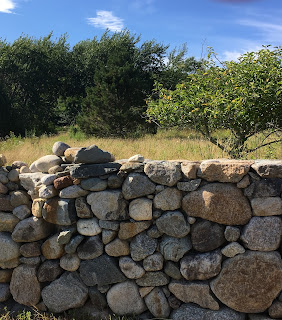 I thought I remembered being able to walk around the whole island on our last visit but I can't figure out the route this time. On the way back to the boat we pass the little power station for the island. Doug works at a power plant in Texas and is intrigued. The administrator comes outside and offers us a tour. I stay out with the dogs since it's pretty noisy inside.

At the pier we have oysters at a raw bar, then head to the boat for dinner. 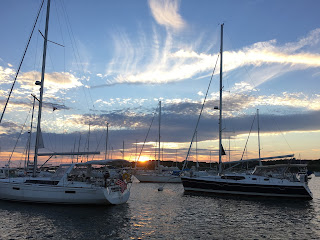 The next several posts are going to be about our two week sailing adventure earlier this summer. We sailed from where we keep our boat in Salem, Massachusetts down to Buzzard’s Bay and Martha’s Vineyard. We had several questions we needed to answer. How would we feel spending two weeks on the boat? Would we go stir-crazy? Would we have fun? How would we handle changes in the weather that would probably change our initial plan? Were we now skilled enough sailors to make a trip this long safely? We managed to get answers to all of these questions, and more.

We sailed on our own for the first few days of the trip and last few days as well. For the week in the middle we were joined by our good friends Sally and Doug from Texas. Its always fun to have another couple on the boat but Sally and Doug were exemplary sailors. Sally is easy-going and doesn’t stress the small stuff. Doug is a mechanical genius and a good sport too. They are both very fit so sailing wasn’t too physically demanding for them. And they live in Texas so the intemperate heat we experienced on our trip didn’t faze them!

Thursday July 21 - Salem to Scituate Massachusetts.
We get an early start, head out of Salem Sound and straight across Massachusetts Bay. We put up the sail for a bit but we're heading straight into the wind so eventually we take the sails down and motor the rest of the way. It's nice to be in Scituate again but it's very hot, for New England, and it's very dry. There's a carnival in town. We walk the dogs and then go to Rivas for dinner. As usual we sit outside and the dogs are good, sitting under the table, with lots of little bread crumb treats now and then. We are sitting at a bar-like table that we happen to share with another couple with 4 month old triplets. The triplets are good too, and the couple seem to have gotten a handle on managing what seems like a massive number of simultaneous babies. I am impressed. 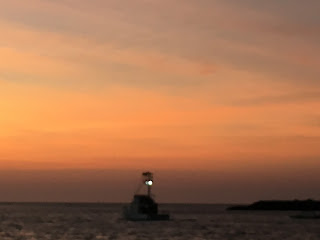 Friday July 22 - Scituate to Sandwich
We get another early start to try to beat the weather that is coming in. We do pretty good across Cape Cod Bay for the first four hours, but the weather just builds and builds. It's blowing hard from the southwest, so we're going straight into it again, and the seas are getting more challenging by the minute. Hardly any other boats are out and most of them are going the other direction so at least they are going downwind.  Now lest you think we were being careless sailors we did look at this blow on the marine forecast before we started out. We had a bail-out port of Plymouth if the weather came in faster than we were expecting it to. The thing was, it didn't, and we were well past Plymouth when it really hit. Our boat would be fine in much bigger seas than this, its just not a lot of fun to be slammed by waves over and over again.

The few sailboats we see gradually haul in their sails. Even motoring into the wind we can barely make 3 knots with the throttle full on. The seas are easily 4 foot swells, breaking over the bow and drenching Lee at the helm. I cower behind the dodger with the dogs and even there we get wet. We finally make it into the mouth of the canal and soon after into Sandwich harbor, a tiny place with slips only, no moorings. With the wind blowing so hard docking the boat is a challenge too. I am busy getting the fenders and lines set up so I’m not really watching as Lee tries to maneuver the boat into the slip. When I finally look up I am completely turned around and have no idea where we are. Finally we’re tied up safely. I’ve never been so glad to be out of the weather in my life.

Once ashore we start to walk toward town but get sidetracked by an ice cream shop. It's my birthday and ice cream sounds great. We go back to the boat for a beer and then head out again for a birthday dinner at Captain Scott’s Seafood because it was close to the Marina. Its a nice seafood restaurant with a Greek influence. We never did make it into the actual town of Sandwich.