I used to do these sorts of entries in my Hong Kong blog occasionally – a mixture of different things that had been going on in my life, nothing very momentous or enough for an entire blog entry, but still important enough (to me at least) to make them worth writing about. 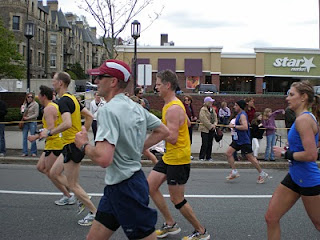 So here we go. In the past couple of weeks I’ve done a couple of things that were very enjoyable. On Monday I went into Boston and watched the Marathon. I’ve never actually WATCHED a race before, all my racing experiences have involved being IN races. I drove into Boston for a change, instead of taking the bus, because I watched the race with the International Women’s Club of Boston and our watching included bringing a dish to share at a ladies’ house before going to watch the race. 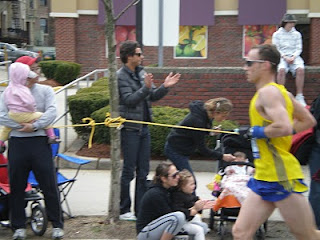 I hate driving into the city, but using my gps this time it wasn’t TOO bad. Boston is so confusing though, and some streets were blocked off because of the race. I went around downtown, and tried to stay out of the worst of the congestion, so my gps kept saying “recalculating”, but eventually I got there. 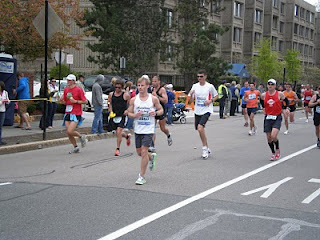 The lady hosting the marathon party’s house was in Brookline, two blocks from the race route and about two miles from the finish line. I expected to see runners that looked half-dead, but NO! These people looked exhilarated and happy. And the crowds were wonderful. Many people had their names written on their shirts or on their bodies so people could encourage them personally. People clapped and cheered for everyone. 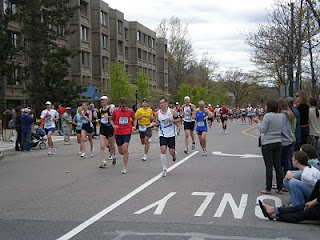 At first while the elite runners were zooming by (running faster than I EVER run), the runners were spaced far apart, but as the times got slower (they were still very fast marathon times however) the runners were spaced more closely together. Most people that run Boston get into the race by running another marathon and getting a qualifying time for their age group that’s good enough. But I didn’t realize that some people run Boston by running for a charity, so there are plenty of people running with slower times as well. 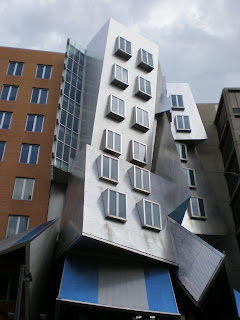 On Thursday, in between the lecture I go to at noon, and my class on Mozart at 3:45, I went over to MIT to see the building designed by Frank Gehry, the Strata Center. What a STRANGE building! It looks like a cartoon. I had a lot of fun taking pictures of it. I thought it was a beautiful, original building, but apparently the people at MIT have mixed feeling about it. I guess it’s not quite as enjoyable to use as it is to view, but as a viewer I thought it was great. 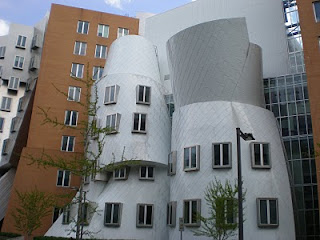 Back in New Hampshire, things are pretty exciting. Harper seems to have decided she is really potty-trained, seemingly overnight. It’s great to not have to watch her anxiously every minute, and she certainly enjoys her additional freedom. 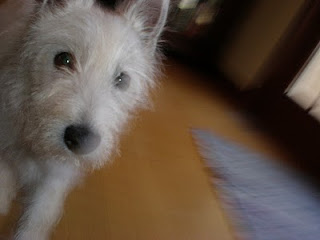 Guess who, that wouldn't hold still for a picture
Our house projects have taken a huge leap forward this week. Our new patio and fire pit are complete, and our driveway is paved! The driveway is downright thrilling (I guess it doesn’t take much to make me happy).
The new deck is coming along as well, and the area where the gazebo will go has been cut out and gravel laid. 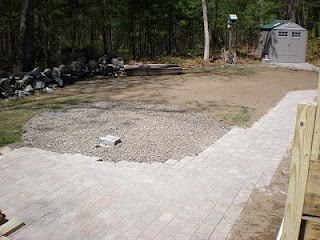 The site of our future gazebo 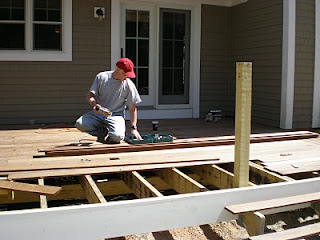 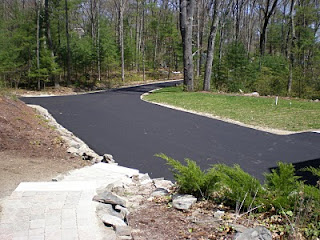 Our wonderful paved driveway!
Last week Lee finished the book shelves in the library, so I have spent this week unpacking boxes and putting away books. A house doesn’t really seem like it is MINE unless there are books around. I need more book shelves, which will go in the living room, but that will have to wait until our other projects are complete. 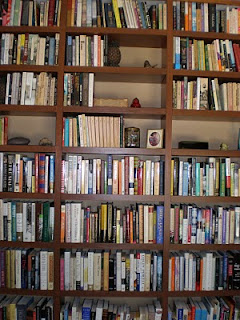 Not bad for a start, but I always need more bookshelves!
Posted by Lynn Nill at 4:15 PM 1 comment: 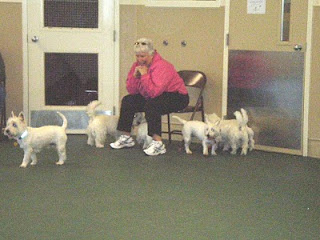 The dogs are all going around and around and around. "Go around again!"
Yesterday, Saturday April 10th, we went to our first “Westie Meetup” at The Barking Dog in Hookset, New Hampshire. Our breeder holds these getogethers for all her dog’s offspring every couple of months. It was lots of fun, and Harper had a wonderful time. 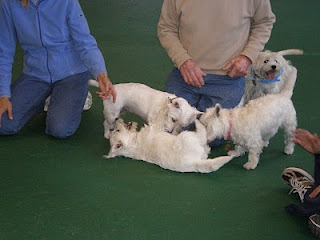 The Westies came in all shapes and sizes. Our breeder has 14 Westies. Not all of them breed, but she has at least four or five current breeding pairs, so depending on the dog’s parentage, the Westies ranged in size from not much bigger than Harper is currently, to close to twenty pounds. And the difference in the way the dogs were groomed made a difference too. 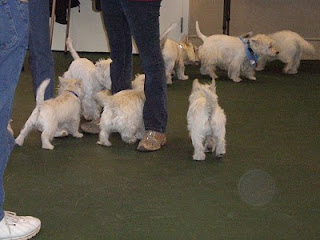 They were all very nice dogs. Some of the older dogs were a little grumpy at being bothered by the younger ones, but they were all very well-behaved, considering the amount of stimulation that was going on. Harper ran herself silly, and held her own very well. She was the youngest dog there. The next in age was almost six months old, and quite a bit bigger. 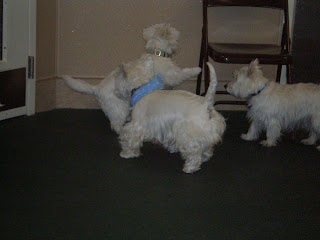 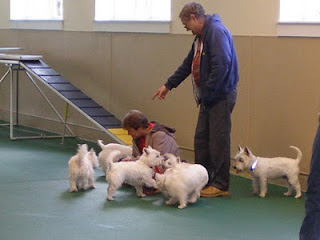 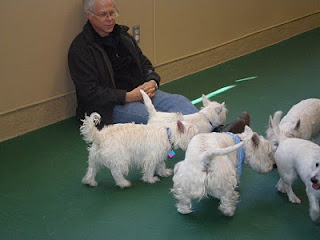 "Hello again. And now do you like my hat?" "Yes. I like it. I like that party hat".
"Goodbye"
"Goodbye!"
They’ll hold another meetup in a couple of months and we’re already looking forward to it! 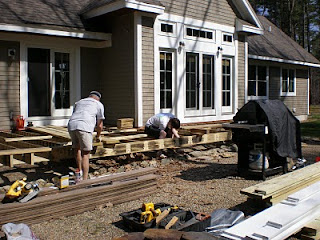 Its spring in New England! I think...the natives say this sudden spate of nice warm weather has come unusually early. Certainly most of the plants up here don't seem to quite believe its time. Things are starting to turn green, and our neighbor's forsythia bushes are blooming, but that's about it.

We have started work on our new deck. Its fun to watch it slowly taking shape. Although there isn't much to see yet, I expect to have better pictures to publish in the next couple of weeks, that is, if the weather holds. 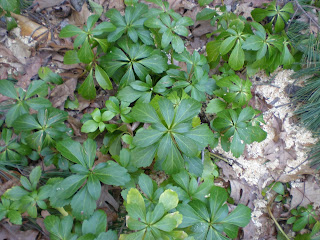 I've been watching to see what plants the previous owners put in around this house. It doesn't seem like they did anything major, just some groundcovers and a few bushes. There are some pretty yellow wildflowers blooming along our still unpaved driveway. I don't know what they are. They look like some kind of aster. I'm hoping to take a class in wildflower identification sometime this summer, or maybe next fall. I'd like to learn more about what grows naturally around here! 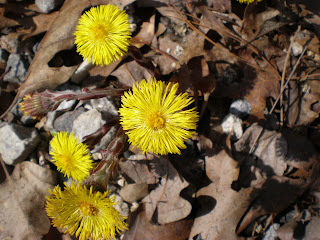 Another thing I did this weekend was drive to the Massabesic Audabon Center, about 30 minutes away from here in Auburn, New Hampshire.  They have classes too, in birding. I used to know a fair amount about birds but when we moved to Texas the birds changed, and then changed again when we were in Hong Kong. I had too many other things I wanted to do, so birding fell by the wayside. Now in New England, once again my interest is piqued. We have all kind of ducks and cormorants around since we live on a lake, and even the occasional sea bird, since the ocean isn't very far away. But we also have old faithfuls, like this chickadee. 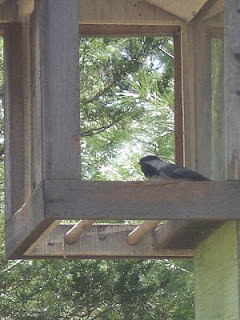 I haven't seen any warblers yet at our feeder, but it may still be kind of early for them up here in the north woods. Then again, maybe they just don't get a chance, since our feeder isn't squirrel-proof!

Well, once the deck and new patio and screened gazebo are built it will be my turn to start planting flowers - columbine, day lilies, ferns, whatever the animals around here won't eat and will grow well. I know Gail would be happy to send me cuttings of her hellebores and perfect pink phlox! I may even have to start my own hedge along the driveway.... 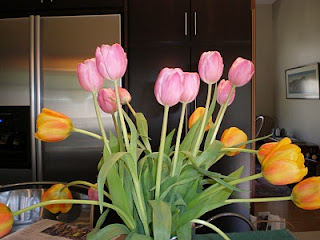