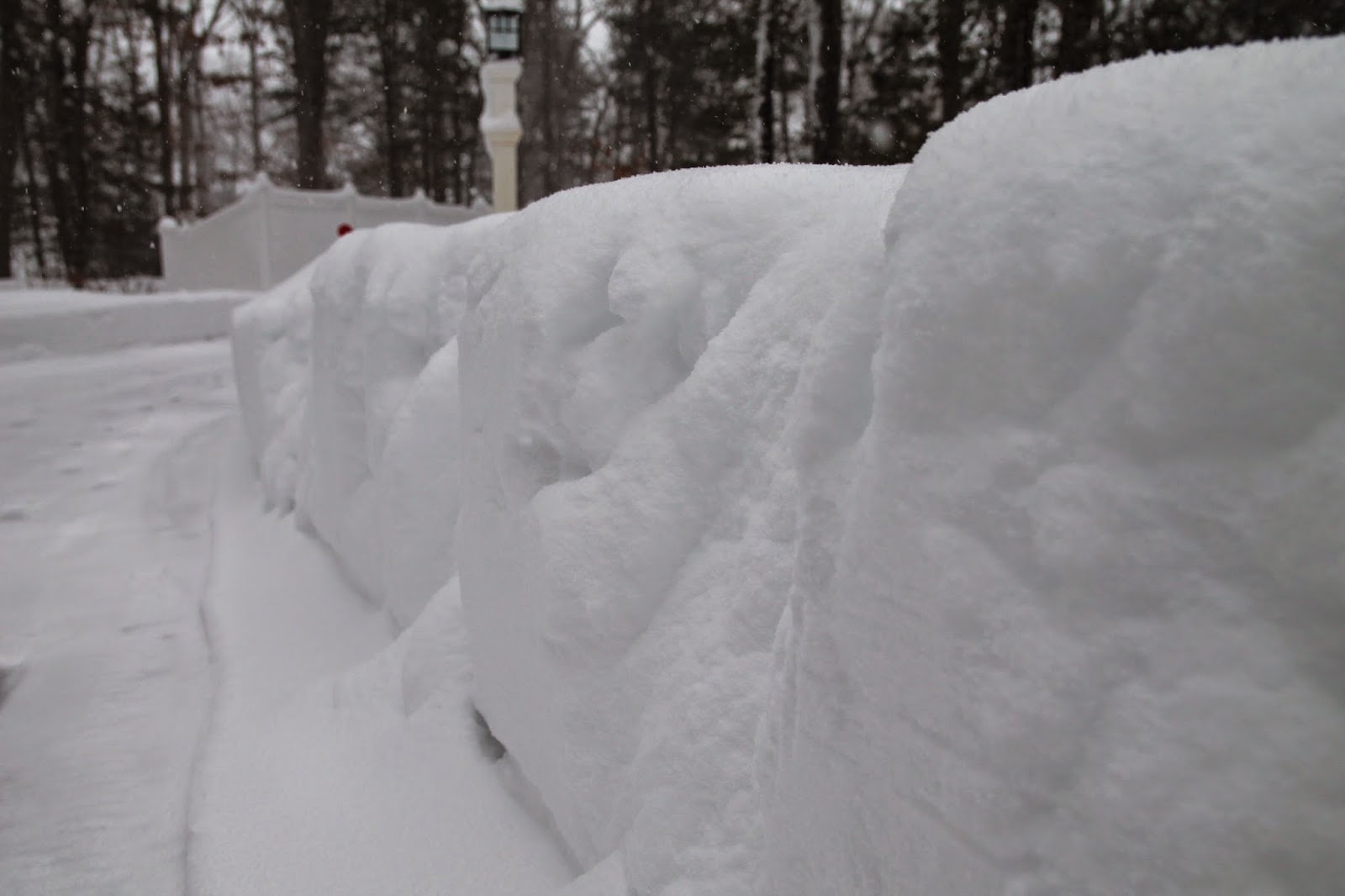 When the media gets as hot and bothered about a storm as they did about this one, it brings out the skeptic in me. And if I lived in New York City I’m sure I would be rolling my eyes and pooh-poohing the weatherman.  But even so we went to the grocery store with the other crazed masses and made sure our pantry was well stocked. A good time to make spaghetti, Lee declared. Sounds good to me!

This storm developed off the east coast and headed north from the Carolinas on Monday. They said all along that if it tracked a little further to the east it might not be as bad, a little further to the west and it could “be a storm of historic proportions”. Well down by New York City it DID track a little to the east, but once passed Long Island it headed a bit to the west, straight toward Boston and southern New Hampshire.

The storm started Monday afternoon. Fat lazy flakes started drifting down around 2:30 in the afternoon. We took the dogs for a short walk and then came home, hunkering down to wait and see what would happen. And Monday night what happened was nothing much. There was maybe an inch of new snow on the ground when we went to bed Monday night.

Tuesday morning was a different story. At 6:30 AM there was 13 inches on the ground. The snow was falling fast and furiously. I put on my snow pants, my down coat, my boots and my ski gloves and went outside to clear a little bit of a path for the dogs. I knew Lee would make a better path with the snow blower later, but I had to do something until then. 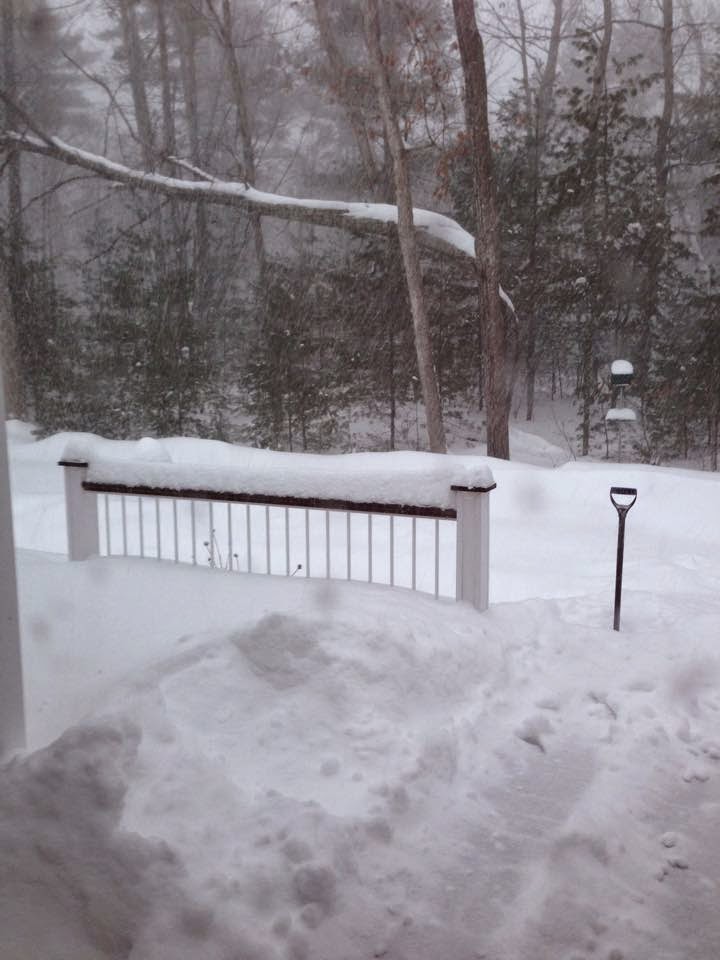 I opened the door and told them to go out. I know that dogs can sense the weather. Harper and Heather were both like “NO NO NO.” I had Lee hand them to me and I made them go outside. I could make them go out, but I couldn’t make them do their business. They weren't having any part of it and scurried back inside as soon as I would allow it. 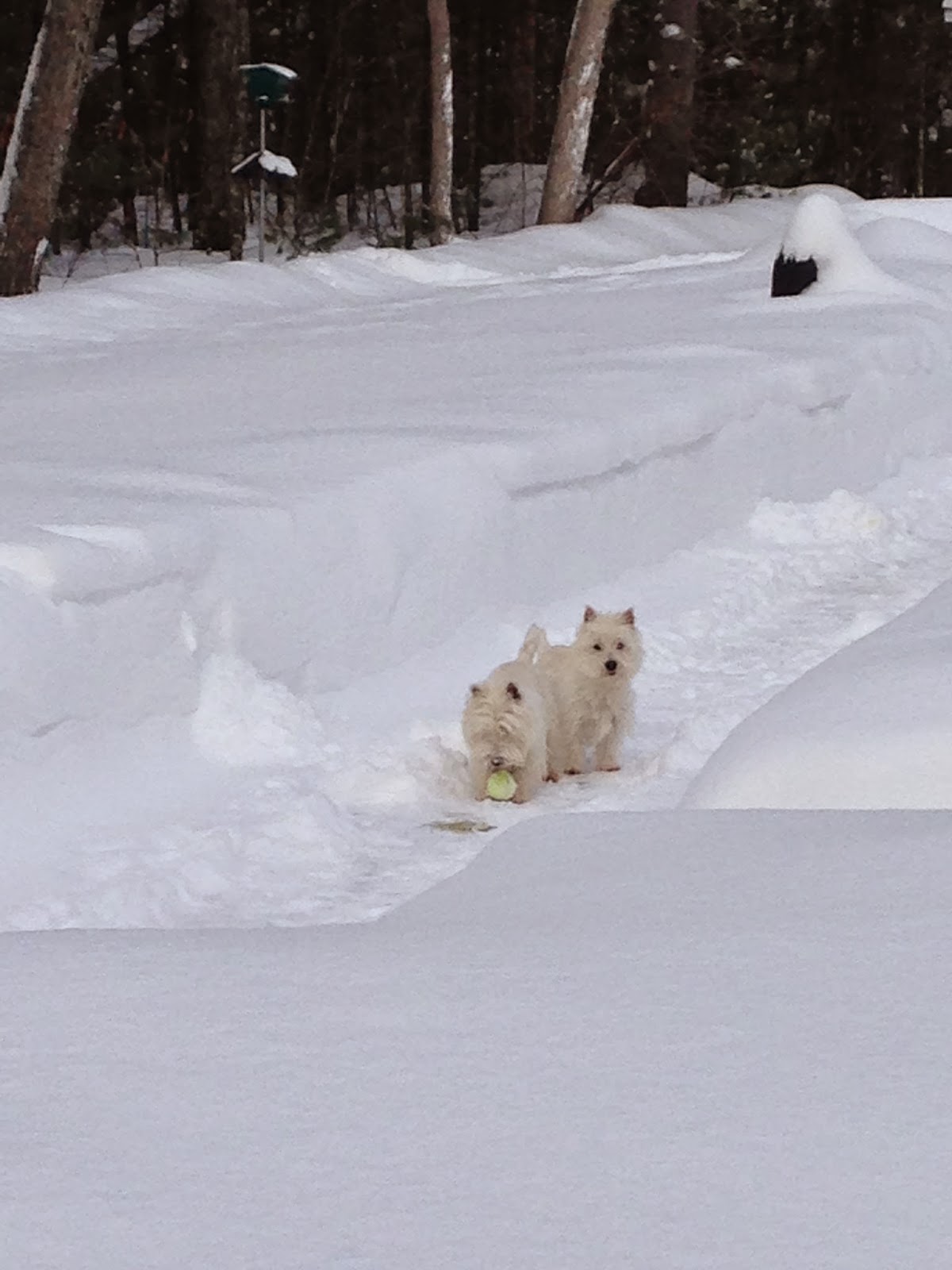 Cosmo on the other hand thought it was great, all the white fluffy stuff to run through, sniff, dig and roll around in. He would have stayed out longer, but it was cold and windy out there. 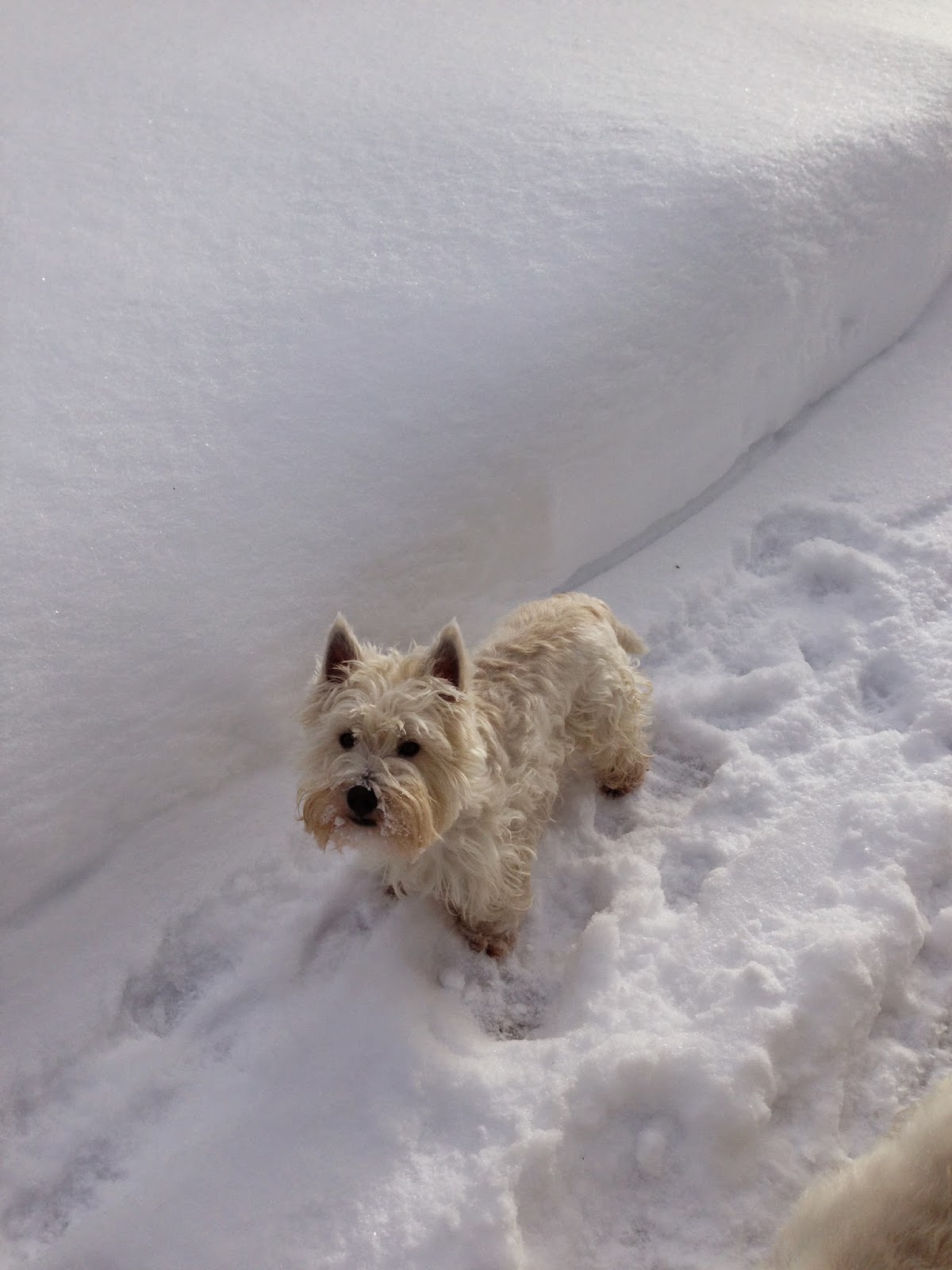 The rest of the morning we watched in amazement as the snow just came pouring down. By 10:30 AM we had 24 inches! That’s over 2 inches an hour, very impressive. But by 12:30 things had slowed down considerably. We had 25 inches by then and never really accumulated much more. In the cleared off spaces several inches would appear, but in my measuring spot it wouldn’t translate into much of anything. It was so light and fluffy that it just kept on compacting. Every three or four hours I’d get the dogs to go out and I’d go out too. It was beautiful out there. Later in the afternoon when it had slowed down I took my camera out and had fun taking pictures, but it kind of made me nervous because it was getting wet. And my hands were freezing! 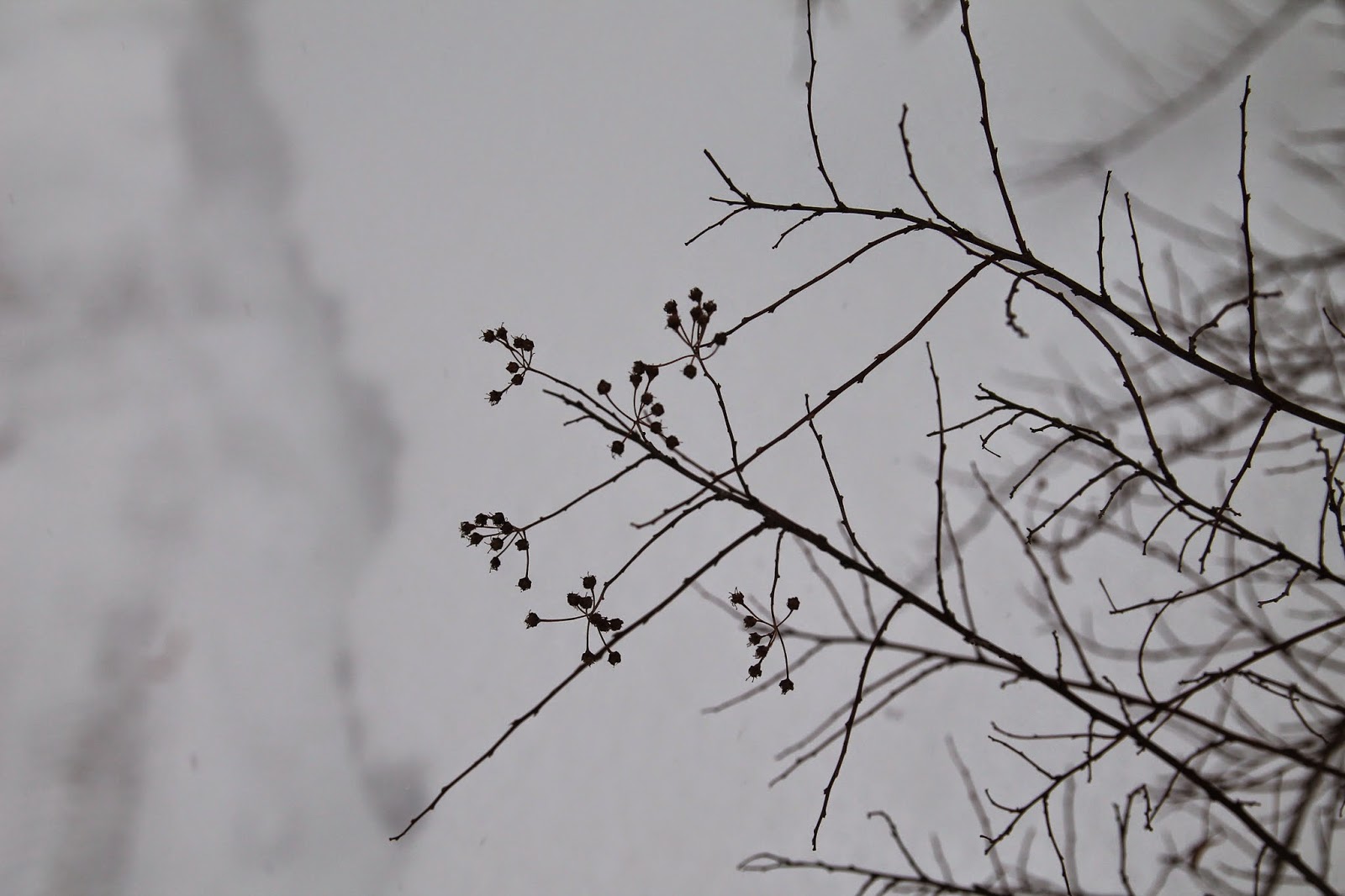 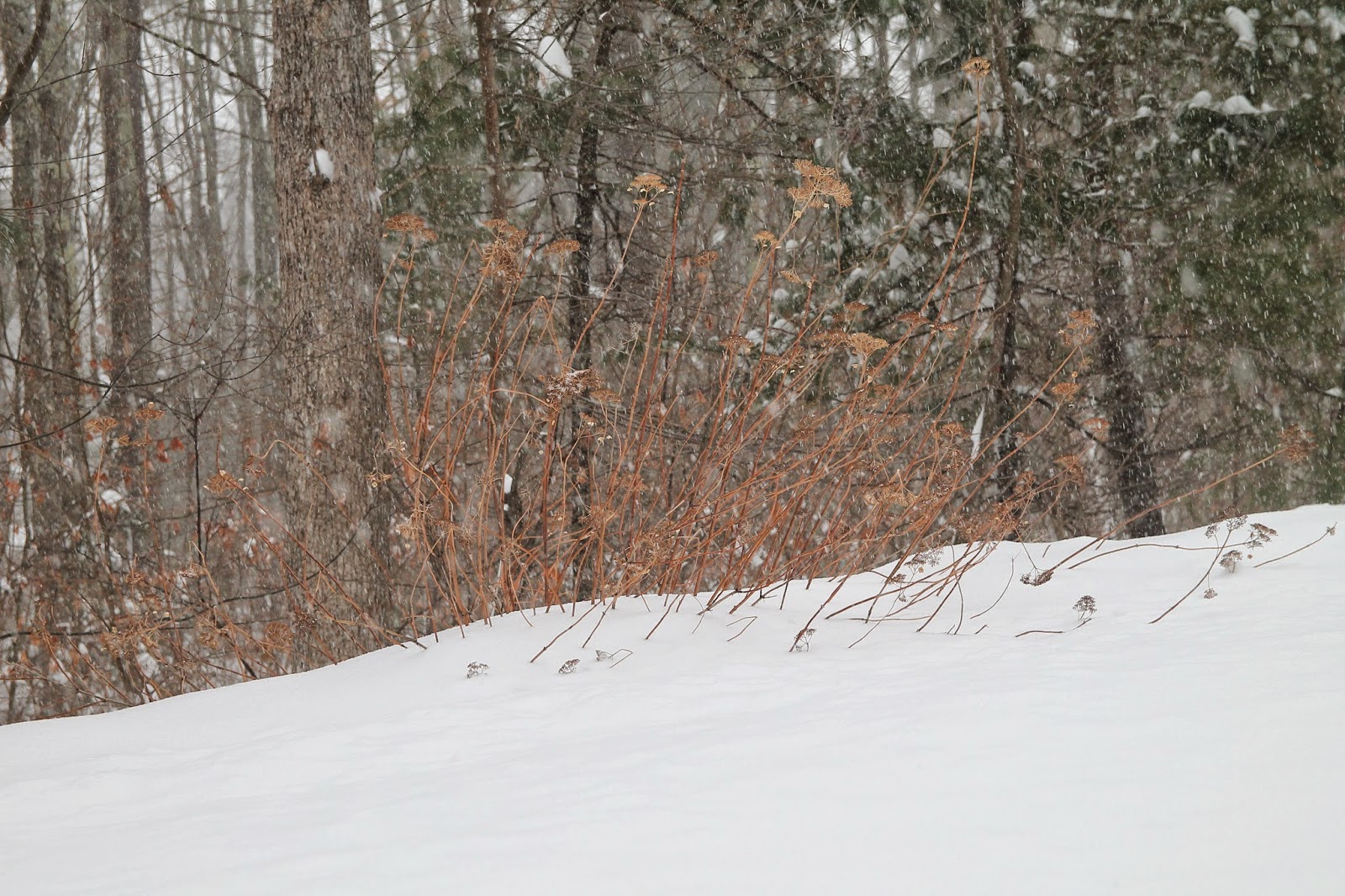 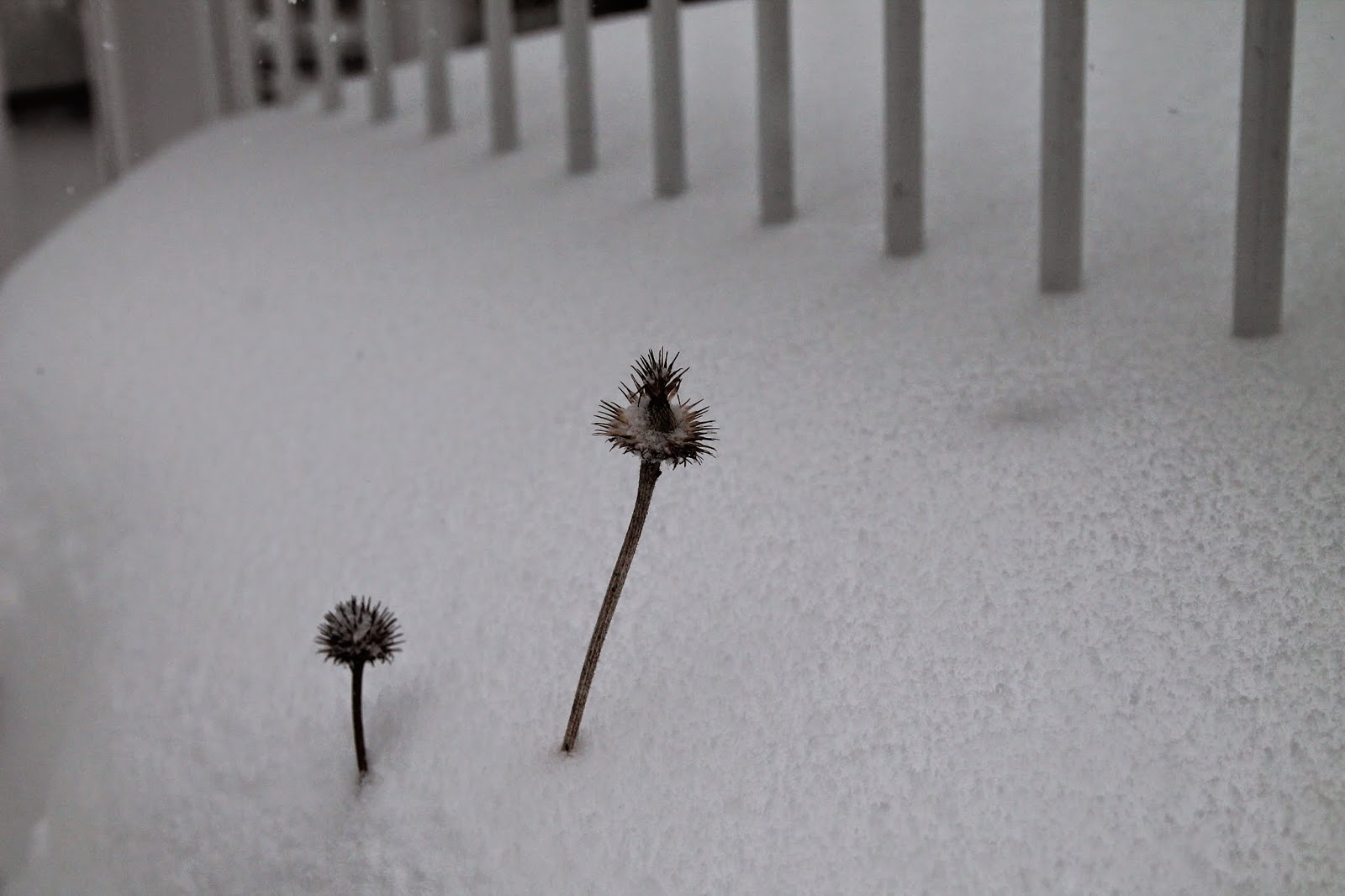 Wednesday morning I went out with my shovel and my big snow boots. First I had to wallow through the snow to the bird feeder. The snow and wind had glued it shut and the birds weren’t at all happy. The snow was up to my thighs! I was glad it wasn’t very far away. Then I shoveled the steps to the driveway from the back yard. I knew where they were by the plow sticks but otherwise I would have had no clue. 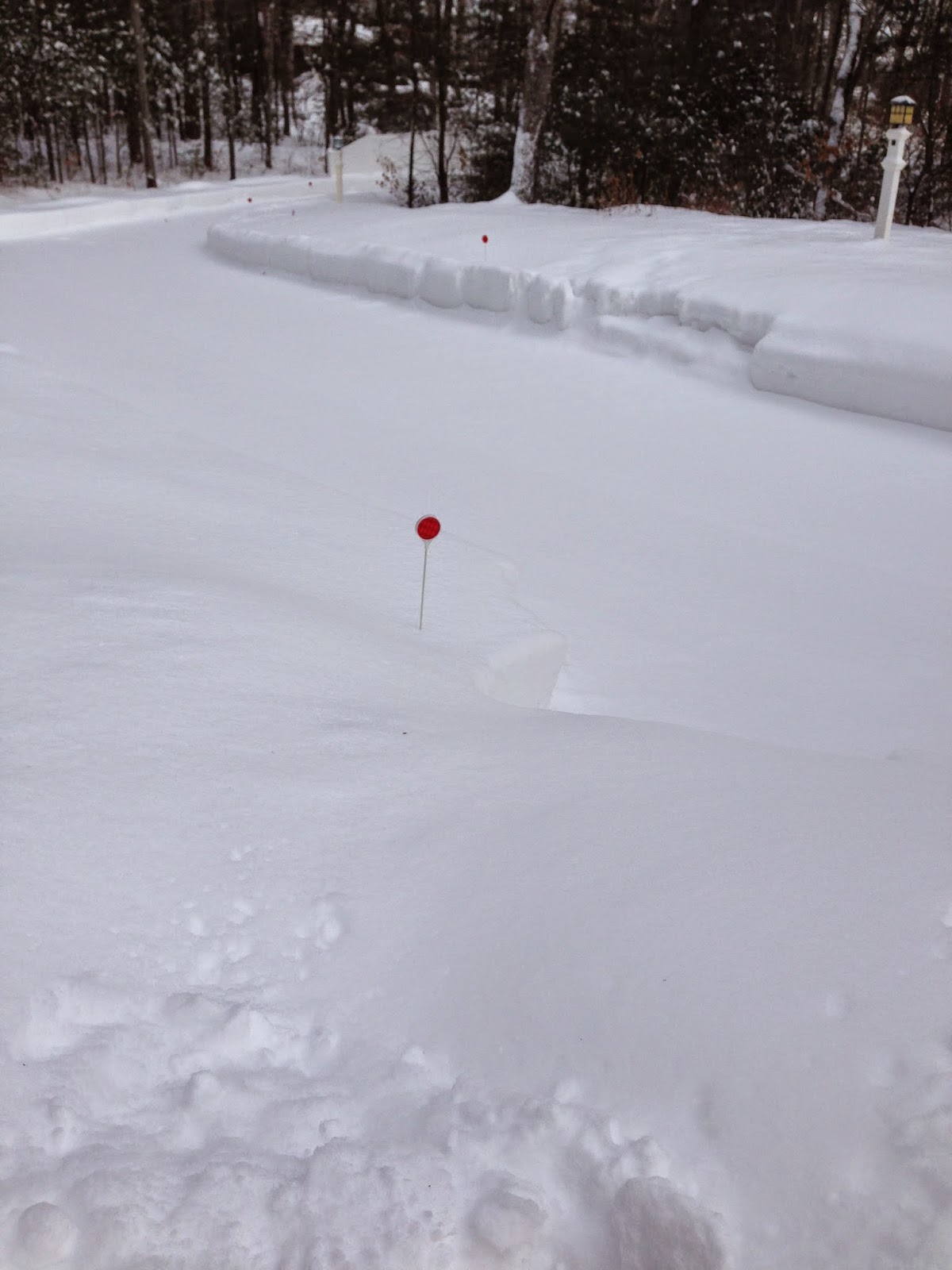 Same with the front steps; it looked like a big mound of snow. As I cleared the front steps and the porch I started running out of places to put the snow. I had mounds of snow that were as high as the porch on either side. 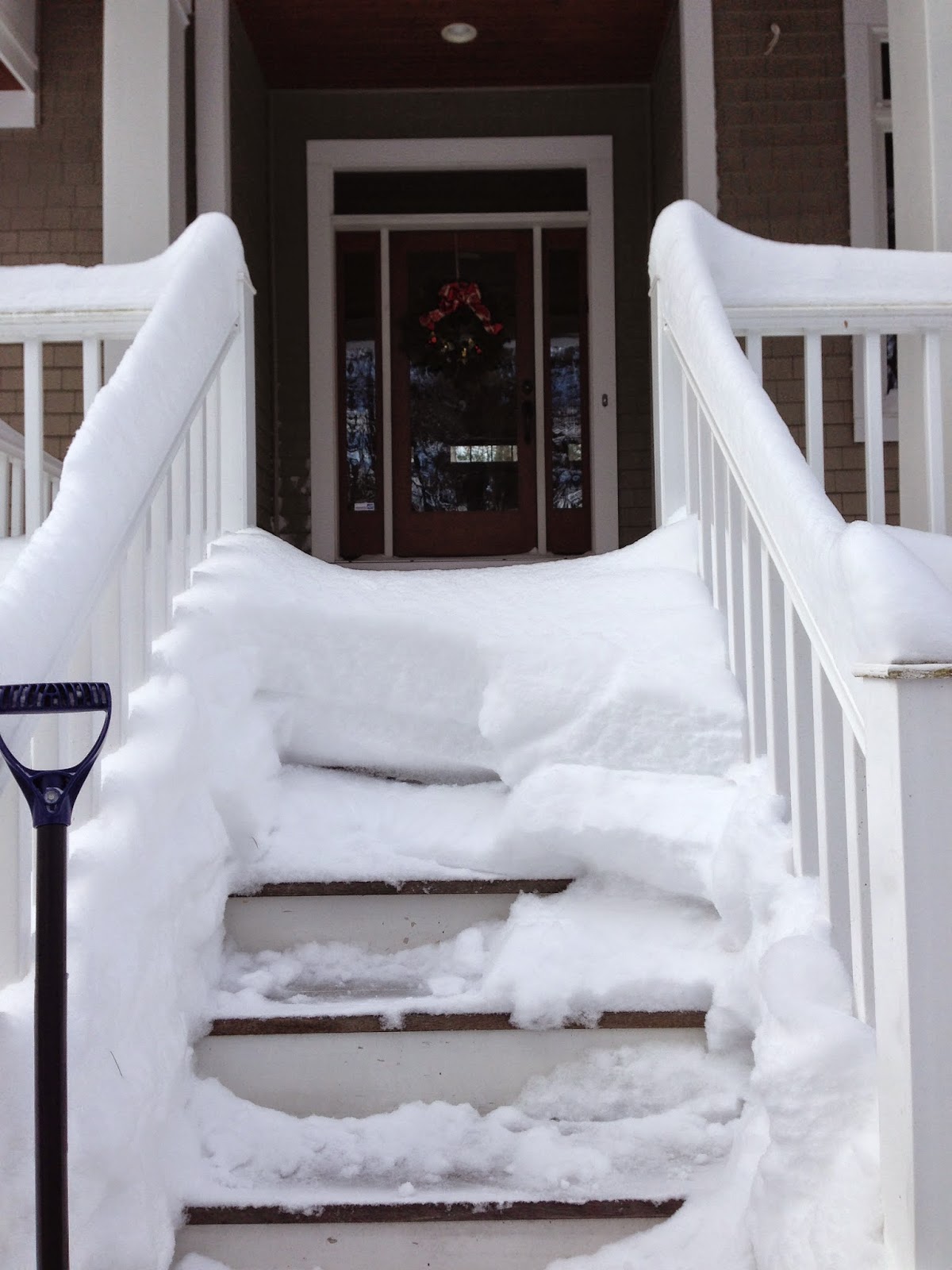 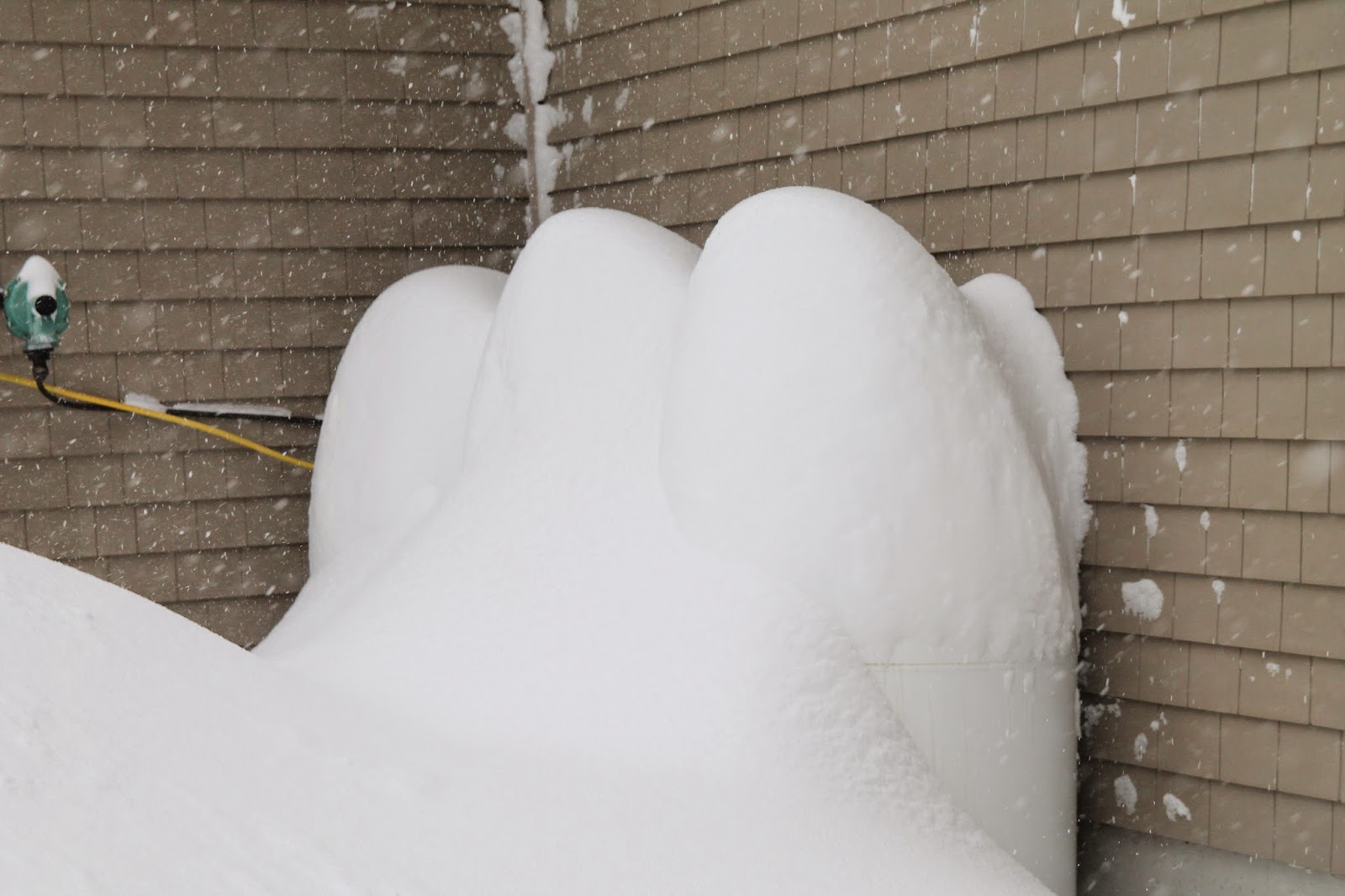 My total Wednesday morning was 26 inches. Nashua, New Hampshire won the lottery with 33 inches of snow. 26 inches was enough for me, thank you very much.

The papers are comparing this to the Blizzard of ’78. The snowfall amounts are comparable, but there is one big difference. This time they shut down the roads and ordered everyone to stay home. That way the streets were clear and the plows could get through. Our street was drivable by Tuesday afternoon. That’s New England for you. A little snow doesn’t slow us down!
Posted by Lynn Nill at 4:50 PM No comments: 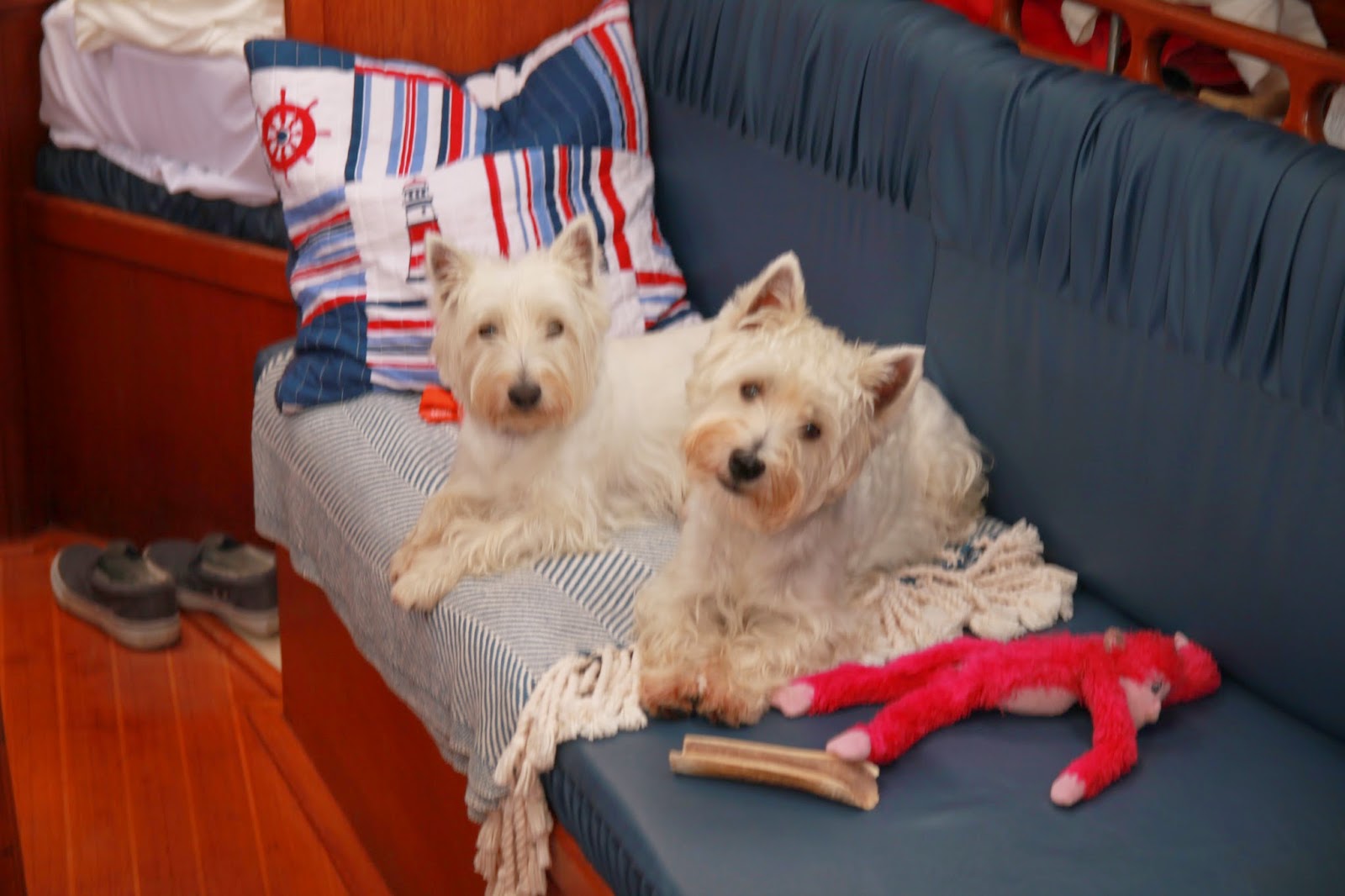 I actually have a pretty good new Years resolution this year. Its not a concrete goal, not about completing another marathon, losing weight, working out more, eating healthy; none of the things that make up my usual sort of resolution. My New Years Resolution is to listen.

I got this idea, I must admit shamefully, from a Huffington Post article on Facebook about ways to improve your marriage. Yes I know that’s pretty trite! And yet, as I idly read through the list of suggestions, one of them really stood out for me. They said to make the effort to put down that book, tear yourself away from that little iPhone screen, and actually listen when your spouse is speaking to you.

I know how guilty I am in this area. Half the time when Lee is talking to me about something that interests him, he will be 3 or 4 sentences into whatever he is talking about before I start to vaguely realize he is trying to initiate a conversation with me. He gets frustrated when I have to ask him to go back and start over once I realize he is talking to me. And then, if the topic of conversation involves boat engines or spreadsheets it doesn't take very long before my mind starts to wander again.

It’s all very well for me to MAKE this resolution, but how am I going to implement it? Somehow I need to realize sooner that Lee is trying to talk to me when my mind is elsewhere. And if what he is saying to me is difficult for me to understand, instead of tuning out and nodding my head and pretending to understand I can ask him to stop and explain what he is talking about in a way that I can grasp.

I don't know if making a conscious effort to listen will help, but like any bad habit, NOT listening is something I think I can unlearn. Maybe slowly, bit-by-bit, I can train myself to hear him sooner. I’m going to try anyway.

And really listening can have other implications as well. Sometimes in social settings I get a bit anxious while making conversation, and instead of listening to the other person I start worrying about what I could say next to keep the conversation going. Maybe I can try to stop doing that as much too.

And maybe sometimes instead of listening to the idle chatter going on in my head, I can listen to what is going on around me, even when that doesn’t involve another person. Is the wind blowing and whipping the pine trees back and forth? Are the dogs sighing and making little noises in their sleep? Would some music in the background improve the tempo and tenor of my day? And sometimes, maybe that TV in the background should be turned off. Maybe those little dogs should stop barking and relax! Maybe the silence should be enjoyed as well. Listening more could have many implications!

I know this is a resolution that would be easy to cast by the wayside after a couple of weeks. It’s a hard one, one that won't be easily achieved in part, let alone in full, maybe ever. So I think it’s a good thing that I'm declaring it in a blog post. Maybe one of you will ask me occasionally, “hey, how is that listening thing going?” I hope I'll be able to say it’s a work in progress, and not, “what??”