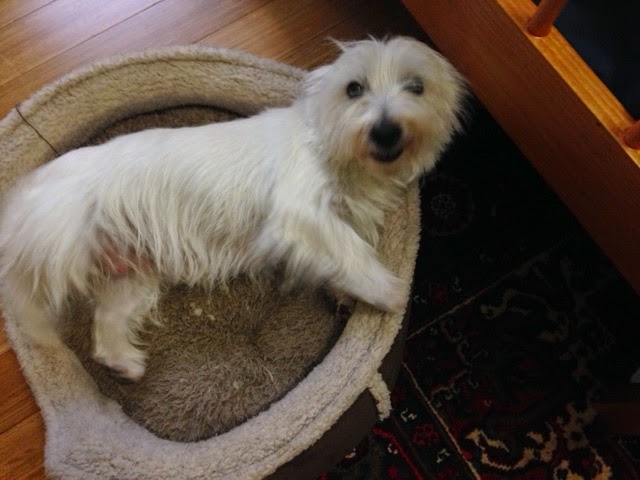 As many of you already know, we have added a third Westie to our family. Her name is Heather, she is around 7 years old, and she is Harper’s mama. Diane, our breeder, retires her mamas at around this age and then gives them to families she knows so they can have a regular doggie life for the rest of their days.

We picked Heather up right after thanksgiving, on Tuesday morning when we came to pick Harper and Cosmo up from Diane’s, where they had been boarding while we were in Missouri. We took all of them for a little walk and then popped them in the car and off we went. Diane loves all her dogs and I know it was hard for her. She went inside quickly so that Heather wouldn't see her cry. 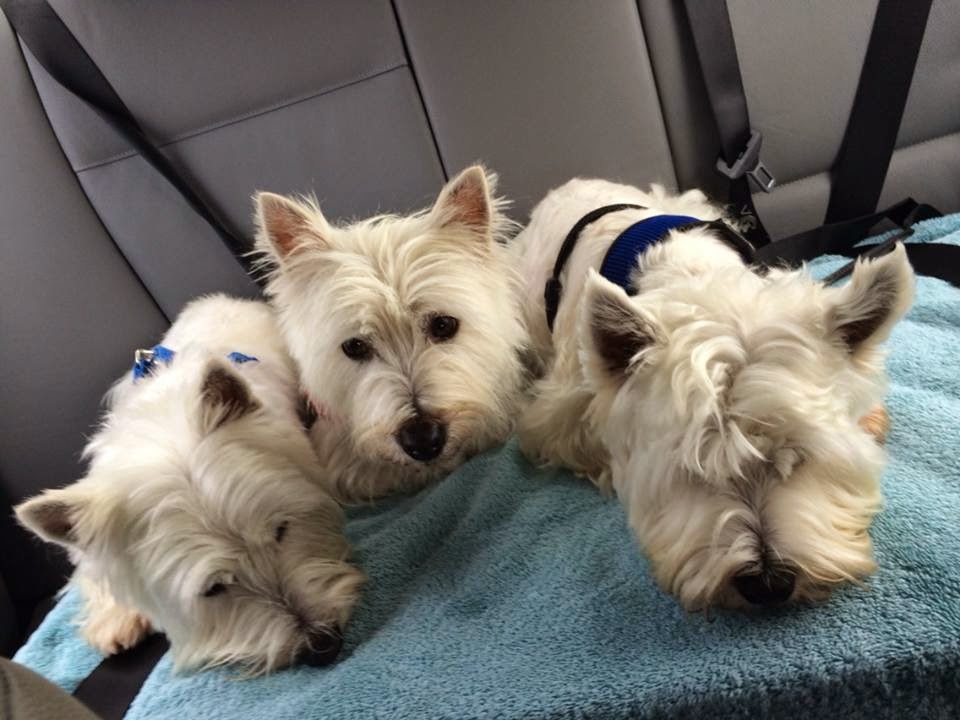 Heather is very friendly. She is a little anxious about her new situation. She is used to being part of a family, but that family includes 14 other dogs and having a crate as her home base. So the first thing we did was drag the crate we used for puppy training out of the basement. This crate has become Heather’s refuge. She retreats to it to take a nap, and we feed her in it, since that’s what she’s used to.

Heather and Harper look a lot alike from certain angles. Not their faces; their faces are both very distinctive. But looking at them from the top looking down on their backs, or from certain side angles, or curled up in a ball, well we’ve both mistaken them for one another.

Heather is following us around, wagging her tail frantically. At first this behavior was obviously very anxiety-based. After all she has spent all her life in the same environment and now she is in this strange new place with new rules, new schedules and two people that seem friendly, but who knows? They might turn around and decide to eat her at any moment! I have been joking to myself that Heather is trying to say “I come in peace….please don't make me into a doggie stew!” 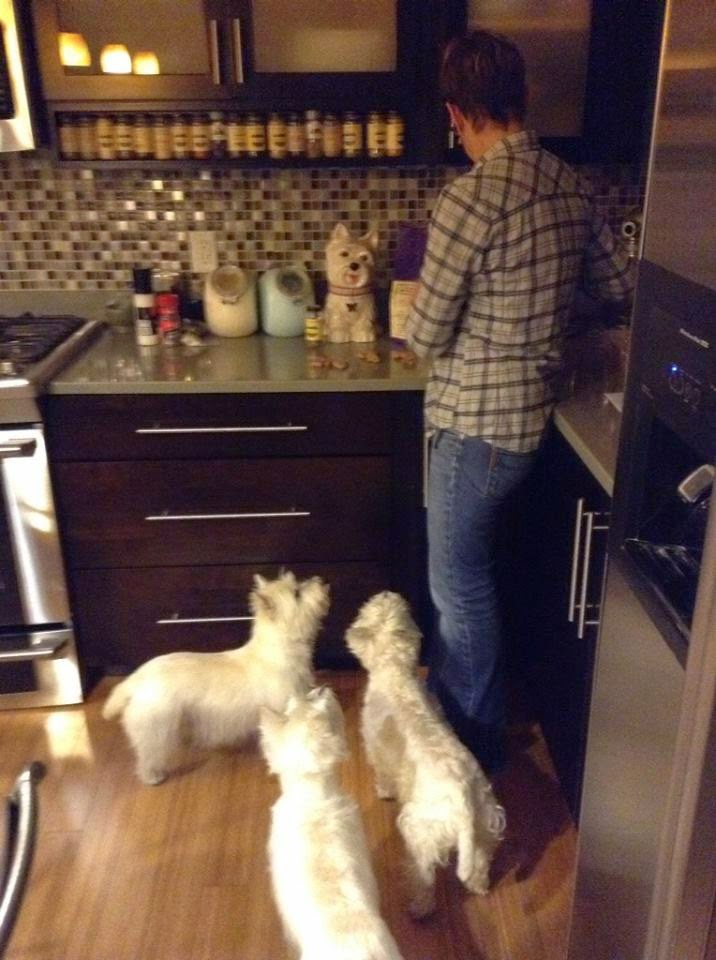 Our first big challenge is/was making sure that Heather knew where it was okay to go potty, ie “This is the inside, this is the outside”. The first day we had a couple accidents, the second and third days only one each. After the first day the accidents seem to have more to do with anxiety than confusion. So we have taken to putting her in her crate before we take her outside (the accidents have occurred right as we're getting ready to go out). This has solved the problem for the time being. I think eventually that won't be necessary but there’s no rush.

The other thing it took us a few days to figure out was our sleeping arrangements. Harper and Cosmo sleep in bed with us, but Diane warned us that Heather is used to sleeping in her crate. The first night she slept gratefully in her crate all night, in fact when we tried to put her in bed with us she kept jumping down. The second night we put her in her crate but she made a lot of noise, rattling around trying to make her bed, growling at any noise or rustle. So the next night we tried putting her in bed with us and she seemed delighted. She wanted to sleep on my pillow right next to my head. Normally I wouldn’t allow this but for one night I didn't mind. And last night she slept in bed with us again, this time down at the other end with the rest of the dogs. I think we have that issue solved.

The next thing we have to worry about is the invisible fence. One thing about Heather, she is very, very good. She recalls perfectly and stays right beside you for the most part off leash. So, we are putting her fence collar on her, but it is set to “tone only” so if she crosses the line she won't get shocked.  But she doesn't understand the fence yet. She has wandered over it or close to it a few times and as soon as I call her she comes right back. But she needs to understand that going over that line is a no-no. So, I need to take her outside on a long line and show her the drill. Let her wander close to the line, pull her back saying “uh-oh! Be careful!” and give her a treat. We did that with Cosmo a few times and he caught right on. She is so anxious and sensitive right now though, I'm a little hesitant. I don't want to scare her!

Everyone I know that has three dogs has said that the third one is really easy, especially if it is an older dog. They are right; except for having her adjust to us, and us to her, she already seems like part of the family.  It’s funny though. Not that I actually yell at my dogs very often, but I AM fairly strict in some ways. Harper and Cosmo know very well that they need to WAIT! At the door before going out, and they also know they have to sit and wait before they may eat. But if we tell Heather to wait at the door, she'll run away and hide on the couch or get in her crate. So for now I am holding her, making Harper and Cosmo wait, letting them out and then letting her out. She is just not ready to learn about that, nor about eating with the other dogs. We'll just give it time. We'll know when she’s ready to take the next step.

I really like Heather. She’s funny, enthusiastic, and loves balls even more than Harper, if such a thing is possible. She may be a little older, and she’s smaller and a bit chunkier, but she has lots of energy. She walks beautifully on a leash and I never have to worry about her running away when she is off-leash. She does like to stay right underneath our feet however. Our joke right now is if you can't find Heather look behind you; chances are she’s right there! 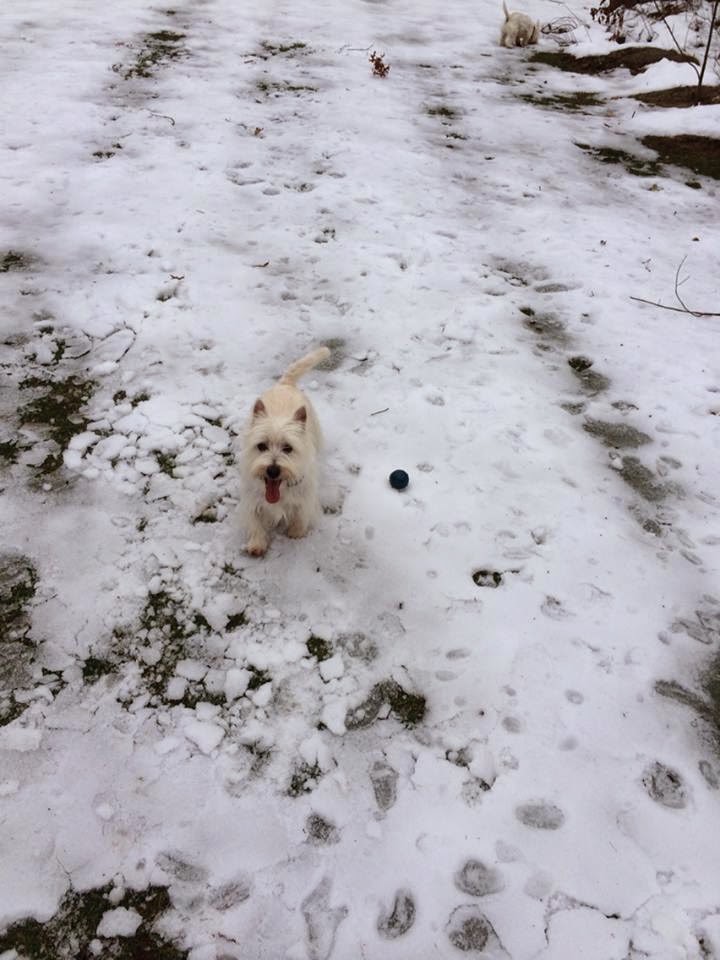