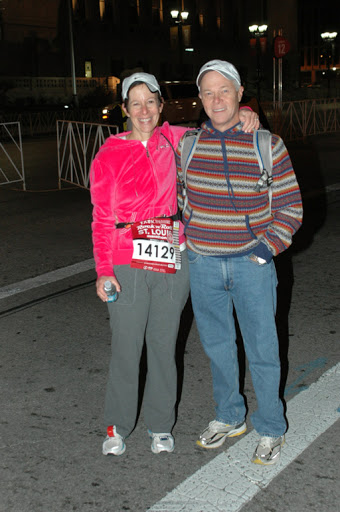 It has taken me a long time to finally write about the St. Louis Marathon. Every marathon is hard, of course, but St. Louis was by far the hardest one I have run so far. On one hand I know it was a good experience for me to complete such a difficult, twisty, hilly race, but on the other hand I made two key mistakes during the race, that I am still puzzling over.

I knew the race was going to by warm at the end for us slower runners. I thought I was prepared for this, and I think I was. I don't remember feeling like the heat was the reason I slowed down so much at the end, but I know it was a factor, and it was at least indirectly a factor in one of my mistakes.

There were some really fun things about this race, and one of the best things about it was that both Lee and Daniel were there to support me and cheer me on. I really, really appreciated having Lee there to drive me to the start and hang out with before the beginning of the race. 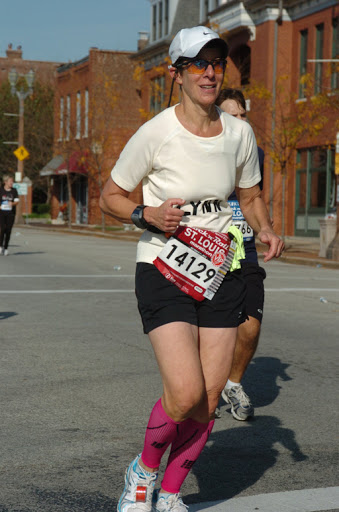 The race began in downtown St. Louis, on Market Street, facing the Arch. It wound it way around Busch Stadium, through downtown, Tower Grove, Lafayette Square, and other historic neighborhoods, before going through Forest Park and finally back downtown. I had more or less driven the race route a few days before, and I knew it was hilly, but none of the hills seemed that bad from the car.

There were 16,000 people lined up at the start of this race, a big group to be sure, but nothing like Marine Corp last year. Their method of crowd control at the beginning was different from other races that I've been in. We were assigned to corrals based on our estimated time, nothing unusual there. But instead of letting everyone start off together, naturally spreading out as the race began, each corral was separated by about 90 seconds. The fun thing about this was that when my corral finally made it up to the starting line, I actually stood at the front of the line when we were allowed to start running. That's the only way THAT will ever happen!

The first part of the race was pretty easy. There were some little rolling hills, but nothing steep or long. The temperature was in the mid 40's, perfect for running. I felt great, too great in fact, because right away I made one of the most classic mistakes a marathon runner can make. I was supposed to start out very slowly at a pace slower than 13:00 miles per minute, and after the first 3 miles gradually increase my pace until I was running between 12 and 12:30 miles per minute. But I ran faster, much faster. I just felt really good and confident and didn't think I needed to go that slowly. You'd think after 3 marathons I would know better, but no. This was a lesson that I would have to learn yet again. 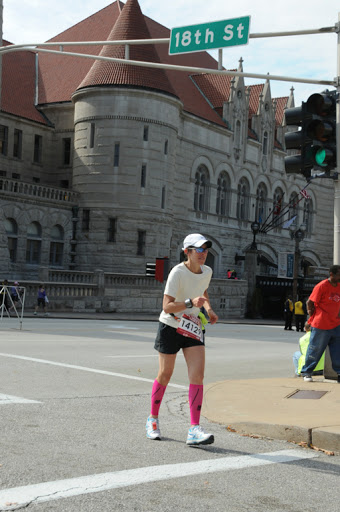 This race included both a marathon and a half marathon. Both races ran together for the first half of the race. When the turnoff for the half marathon took place all of a sudden there were a lot fewer runners on the road. I found out later that of those 16,000 runners less than 1,800 of them ran the full marathon instead of the half.

And after 13.1 miles the hills started to change. Instead of short, gentle hills, the inclines became longer, and steeper. I still felt good, but I was working harder and it was getting warmer too.

Daniel and Lee were there to greet me at mile 16. I was so happy to see them! I gave them both hugs and continued on my way. At that point I was 5 whole minutes ahead of my pace. This should have been a warning signal, but I was in deep denial at that point, with visions of a sub 5:30 marathon dancing before my eyes. 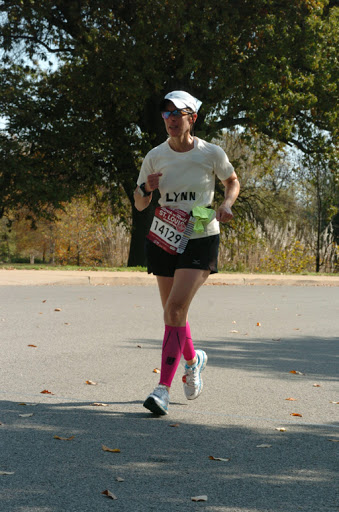 Shortly after I saw Lee and Daniel the race entered Forest Park. This park was the site of the 1904 Worlds Fair, of Meet Me in St. Louis fame. It's a beautiful park in the heart of the city, but it's also pretty hilly.

Some of the aid stations included Gator Aide as well as water. By now I was not only drinking the water, but pouring some of it into my hat in an attempt to keep cool. I also decided to drink Gator Aide at some of the aid stations instead of water. I was worried about my electrolyte levels because of the heat, but this was also a risky proposition since I hadn't practiced drinking Gator Aide during my training. So once I drank the Gator aide I was also worried about having an upset stomach.

And here I made my second mistake, and I think it was the one that hurt me the most. One of the challenges of running a marathon is that one's body simply cannot store enough glycogen to get through the race, without taking in nutrition while you are running. I have learned from experience that GU energy gel packets work well for me, but they will give me an upset stomach if I down an entire packet at once. So this year I had a small plastic squirt bottle that I would put several gel packets in. That way I could take in a little bit of gel every couple of miles without getting sick. I practiced taking a sip of gel with some water every couple of miles on my long training runs and it worked great. And during the marathon I did this, until I got to Forest Park.

When I drank some Gator Aide and started worrying about getting an upset stomach I skipped a few of my gel sips, not wanting to overload on nutrition. I should have just stuck to my plan, but alas.

While running through Forest Park I no longer felt great, but I still felt tough. I would pick off runners and pass them and exhort myself to keep going. But I was slowing down, and there wasn't anything I could do about it. By the time I saw Lee and Daniel again at mile 22, I was 10 minutes behind my goal pace. I didn't want any hugs this time. I was well into marathon suffering mode.

Those last 4 miles were incredibly difficult. The hills continued and I could no longer follow my run 35 seconds /walk 25 second plan. I even turned off my little timer because its buzzing annoyed me so much. I continued to walk and run in a disorganized fashion, as the miles crawled on. I shuffled next to a couple of ladies for a little bit. For one it was her first marathon; the other like me had completed several others. I joked (I could still joke!) that marathons were like childbirth. We forget what those last 6 miles feel like, because otherwise we would never run another one. 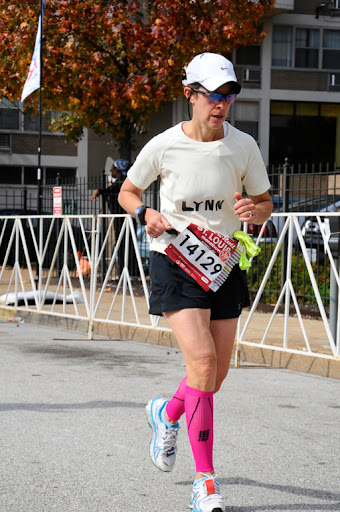 By the time I crawled across the finish line I was 20 minutes off my goal pace. And when I took my little plastic bottle of gel out of my pocket I was shocked at how much remained. Apparently when I stopped taking my sips of gel in Forest Park I never started back up again. This is something I have GOT to fix before my next marathon. 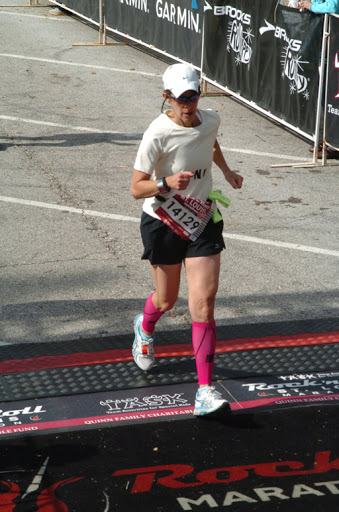 Because yes, in spite of my disappointing finish I am still gungho on this marathon thing. I will never be a speedy runner, and in fact, I may be starting the inexorable slowdown that happens to every runner eventually, which means that this slow girl is going to get even slower. But that's okay, really it is. I really do mean it when I say my REAL goal is to keep running marathons at least until I turn 70. That means continuing to run and train conservatively to avoid injury and stay healthy.

I still have a long bucket list of marathons I want to run, some easier than others. I'm still trying to get into New York, and will probably run it in 2014. I'm already thinking about which marathons I might want to run next year. I think I'm going to try either Philadelphia or The Bay State Marathon in Lowell. These are both fairly close and relatively FLAT! They are also late enough in the season that heat should not be an issue. 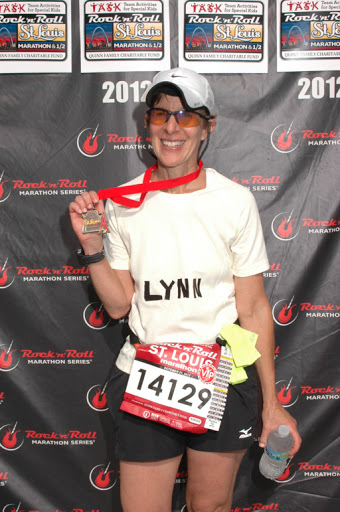 When the marathon was over I could barely walk, but it really was nice to have Lee and Daniel right there to greet me at the finish line. I continued to walk around slowly, eating the post race food that was available, drinking my Endurox R4 post race drink. I was really, really sore, but I knew that continuing to walk around slowly for the next few days would speed my recovery, as it did.

So what were the lessons I hopefully learned from this race?

2. Stick with my nutrition plan. Skip the gator aide unless you have tried it in training. Make a note of when you should take nutrition on your pace band, and use it!

3. In a hilly or hot race adjust your expectations and slow down. It won't kill you and it certainly could help.

Lee said when my time was so much slower than I had hoped he was afraid that I would be upset and discouraged, but I wasn't and I'm still not. Yes I made mistakes but in spite of them I feel like my training went really well, I had a lot of fun before the last 5 miles or so of the race, and I'm still proud of myself for completing another marathon. There were only 10 women in the 60-64 year age group, and no other women in the older age groups. I guess I keep forgetting that most of the people running in any marathon with me are a LOT younger than I am. 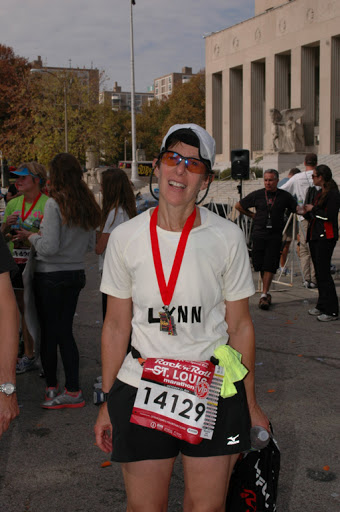