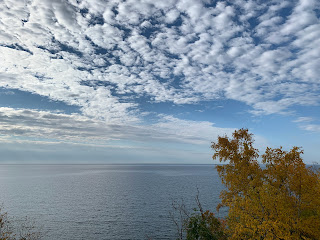 We drove up yesterday afternoon and got here around 5. Cathy and JA were already here. They brought Gus, their beagle, with them. Cathy, JA and I took the dogs for a walk, while Lee set up camp. The leaves are still fairly green this year. When we were here 2 years ago they were past peak. It’s been unusually warm.

We walked into town for dinner and ate at the Voyager Brewery. Another difference from last time. We were in the thick of Covid then, pre vaccine. Everyone was wearing masks, everywhere, and we avoided going inside public places as much as possible.

The brewery had some nice beers, as beers go. JA got a beer flight. I liked the one I got, but I avoid hops if I can. Lee said it was like Budweiser, but nicer. It had a nice flavor. Lee and JA got tacos, Cathy got an arugula salad, I got the pork sliders. The food was good, nothing special.

It went down in the 50’s last night, chilly but nothing like how cold it was last time.I was very comfortable with the heater and our down quilt.

This morning everyone except me went on a hike to climb Eagle Mountain, the highest point in Minnesota. Don’t get all excited; that’s only 2,300 ft! I decided to stay back with the dogs. It was 6 miles round trip, so Heather would have been in the backpack for most of that, and even Harper hasn’t hiked that far in a long time, plus the trail description said in was very rocky. 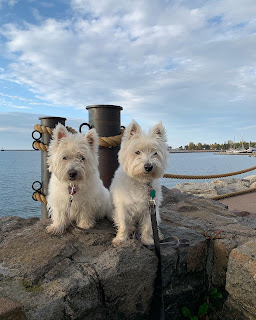 Instead first I took the dogs on a nice walk along the shore, into town and back. We walked around 1.25 miles, and as long as I stopped frequently Heather was fine. Then I hopped on the bike and rode the new section of the Gitchi Gami State Bike Trail, about 10 miles round trip. It’s a beautiful trail along Lake Superior, with long inclines and declines, that my new bike handled with ease. I even hit 20 mph on one of the declines! I still only averaged 11 mph though. Just need to get stronger on those hills. 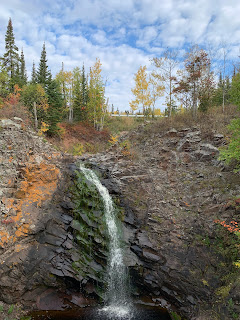 I tried to wait for them to eat lunch but when they still weren’t back I went ahead and ate a little after noon. They didn’t get back until around 1. They said it was a tough hike because it was so rocky. Lee didn’t do the whole thing, he turned around after about 2.5 miles. I’m glad I didn’t go. It would have been really hard on the dogs, and it would have been hard on us to carry Heather in the backpack that far with so many rocks.

It was a beautiful sunny afternoon. l sat outside at the picnic table while they ate a very late lunch. After that we walked into town because I wanted some coffee. We walked over to the path to the lighthouse but I was ready to take the dogs back to the RV. Heather had already walked a lot for her today. 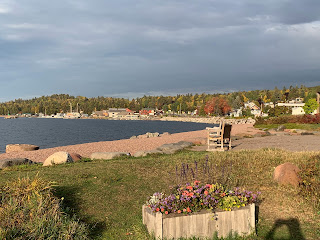 When we got back I set up the dog fence and a chair and sat in the sunshine with the dogs and crocheted and chatted. I actually wore my sunglasses while I was crocheting! JA had taken Gus and walked to the lighthouse, and when we got back Cathy realized she was locked out of their RV so she hung out with us until he got back.

The sun dipped behind a pine tree at around 4 pm and it suddenly got chilly so we retreated inside until it was time to go to dinner. This time we decided to try The Angry Trout, right down the road from the campsite. We had to wait a little while for a table but that was ok. The food was good. I had the fish of the day, which was herring. Not the usual herring you get from the ocean, this was a fresh caught fish that was a lot like whitefish. I thought it was good. Everyone’s dinner came with a side salad that was huge.

We walked back to the RV and started getting ready for bed right as it started to rain. Good timing! We fell asleep to the sound of rain against the RV.

We woke in the morning to sunshine and much colder temps. After  ate my breakfast I decided to take the dogs for their morning walk. I started out and then went back to get my phone so I could take a picture of the sunrise. I’d been having trouble opening the door to the RV and this time it was really stuck. Lee had to open it from the inside. I went ahead and took the dogs on a little stroll. When I returned Lee was outside. He had been trying to figure out what was wrong with the door and had locked us out.

It was a bummer. All the keys were inside the RV, including the keys to the truck. Fortunately the truck bed wasn’t locked so he had access to his tools. JA came over to help and I started calling locksmiths,  most of whom either didn’t work on campers or weren’t yet answering their phones, or lived an hour away from where we were. We tried to find another camper with the same keys, no luck. We tried to get in via the emergency exit, but it’s made to allow you to get out, not in. They tried to pick the lock, nope. Finally they drove to the hardware store to get the right sized bit, and drilled out the lock. That worked. All in all it took about an hour and a half to get back into the RV. The dogs were mightily confused, but they didn’t mind eating some of Gus’s food for breakfast.

At first I was going to skip my run because now we were running behind but I decided I should go ahead because I was feeling pretty agitated. I’m glad I did. It was a beautiful chilly run, up and down the Gitchi Gami.

We’re on our way home now. Final trip of the season; I’m glad we went. Now the RV gets a break until January when we will head to Florida for a month, and hope that our RV campgrounds weren’t destroyed by Hurricane Ian. 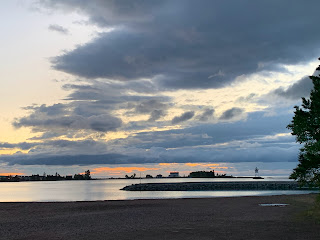