Blizzard Number Two, But Who's Counting? 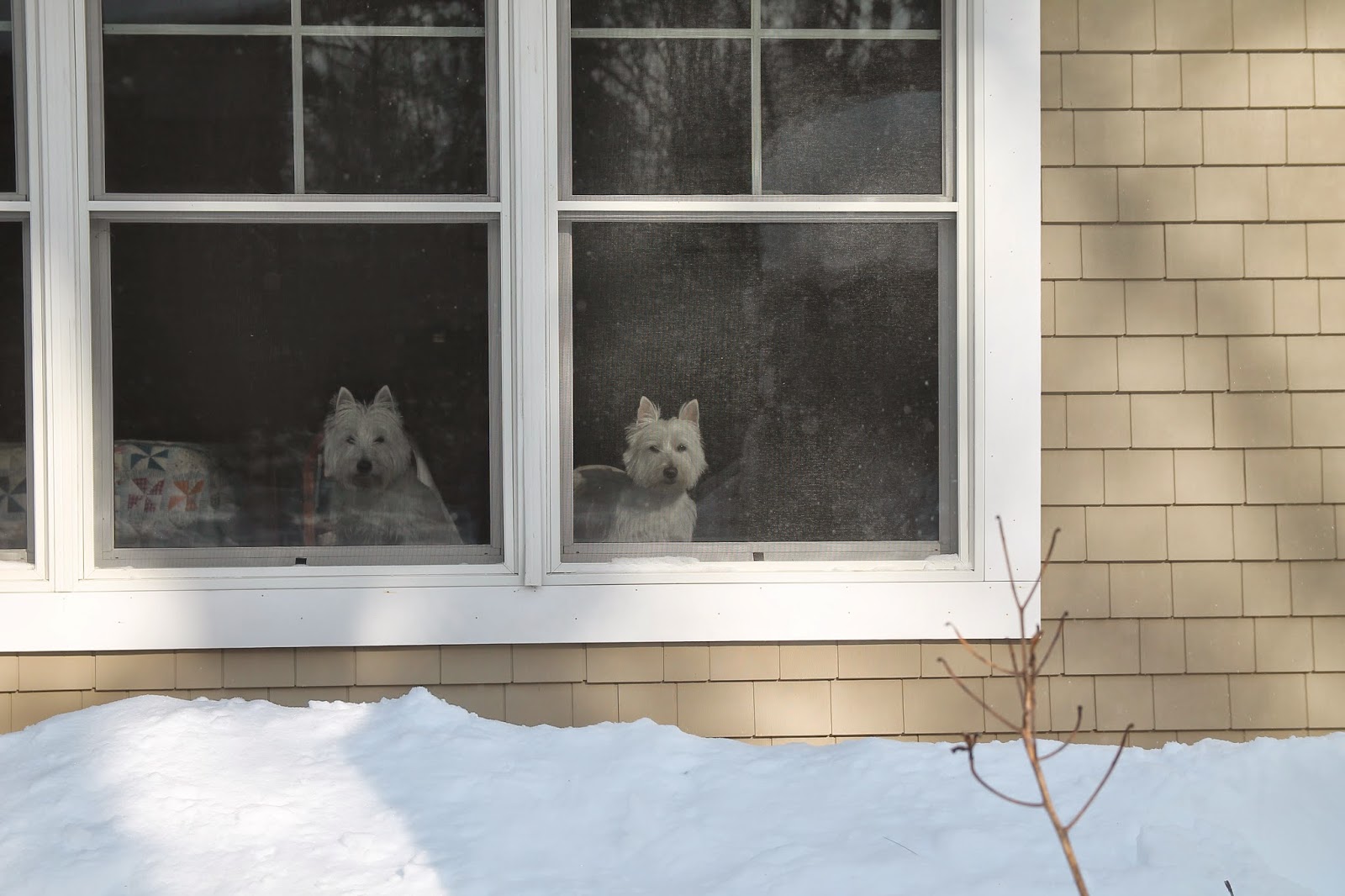 I think its fair to say that New Hampshire is snow weary. When the first big blizzard hit the first week of February, I got out there with my camera and made sure our massive amounts of snow were duly recorded. Little did I know that we would spend the next three weeks watching it snow again, and again, and again. When this latest blizzard hit on Sunday all we could do is stare in amazement, and a bit of horror as another ten inches of the white stuff fell on top of the white stuff already there.

Ten more inches. That’s seventy five inches total in three weeks. THREE WEEKS! The snow pack was up to thirty six inches right after the storm, right up to the top of the deck railing. Now two days later, its “only” twenty five inches.

Lee has been trying to get some of the snow off of our roof. We are not really worried about the weight; this is a relatively new house that is well-constructed. But we are getting ice dams again, and that’s not good. We don’t want leaks in our attic so he uses a roof rake to remove the snow from the eaves and then tries to hack at the ice underneath. Its hard work and I feel badly for him.

Its very hard with this amount of snow on the ground to believe that it will ever melt. I remember in 2011 when we received ninety two inches of snow, I was certain that there would still be errant piles of snow here and there in June, but I was wrong. I know now that this snow WILL melt. Spring will come, and this past three weeks will fade from memory.

So here for your enjoyment are more snow pictures, this time juxtaposed with pictures of the same area from early summer.

Email ThisBlogThis!Share to TwitterShare to FacebookShare to Pinterest
Labels: blizzard 2015 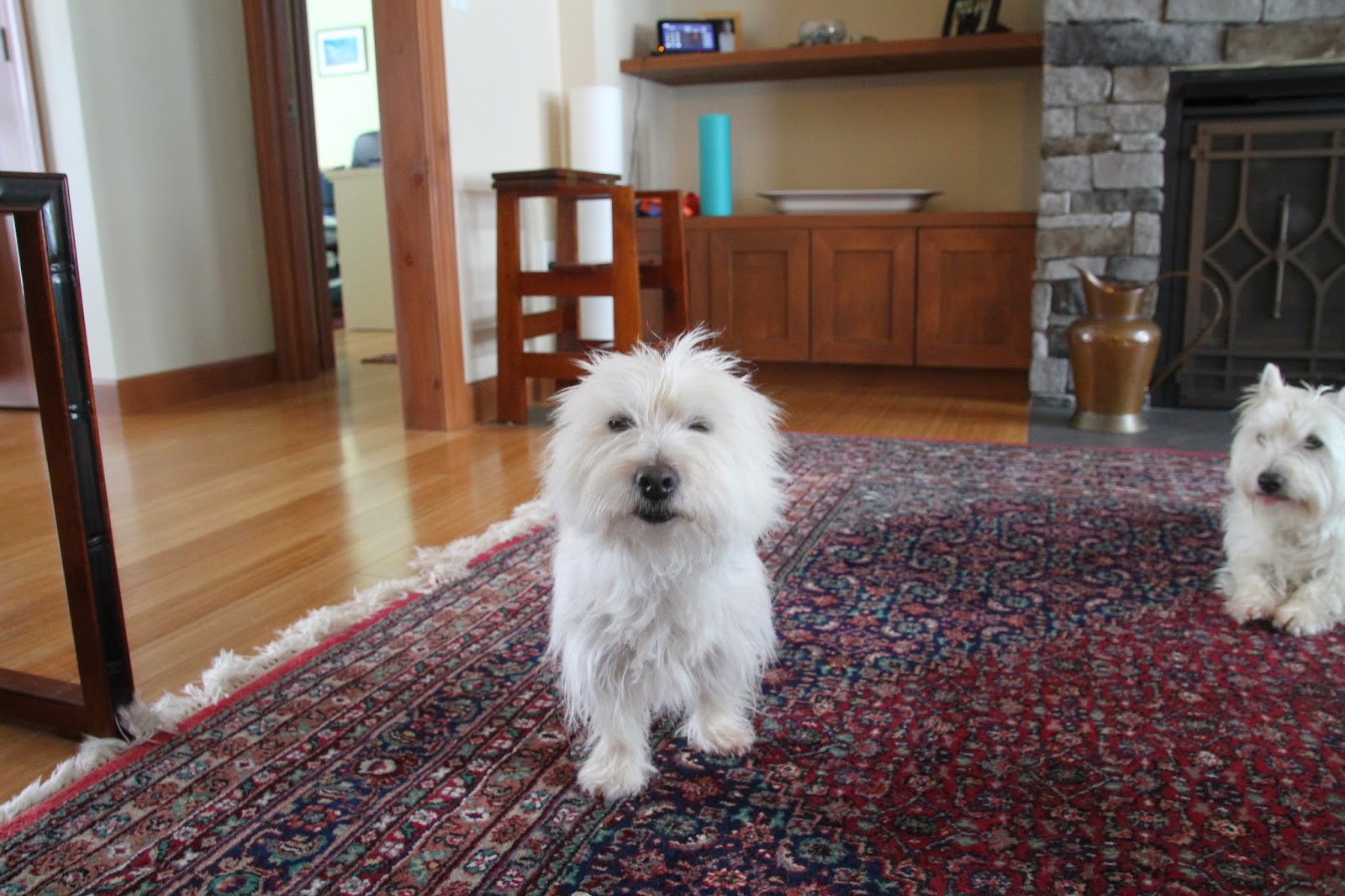 Heather is Harper's mom. Lots of people ask me if I think that they know they are related. I always say no, because how would they know that? But really I guess I should just say I don't know. Because, how would I know if they know that?They have an interesting relationship. When Heather first came to live with us Harper pretty much ignored her, similar to how she treated Cosmo when he first arrived. But now after 2 months, something different is going on. The girls are competing. Generally a pack has an alpha female, and Heather and Harper both think that they should be that dog. 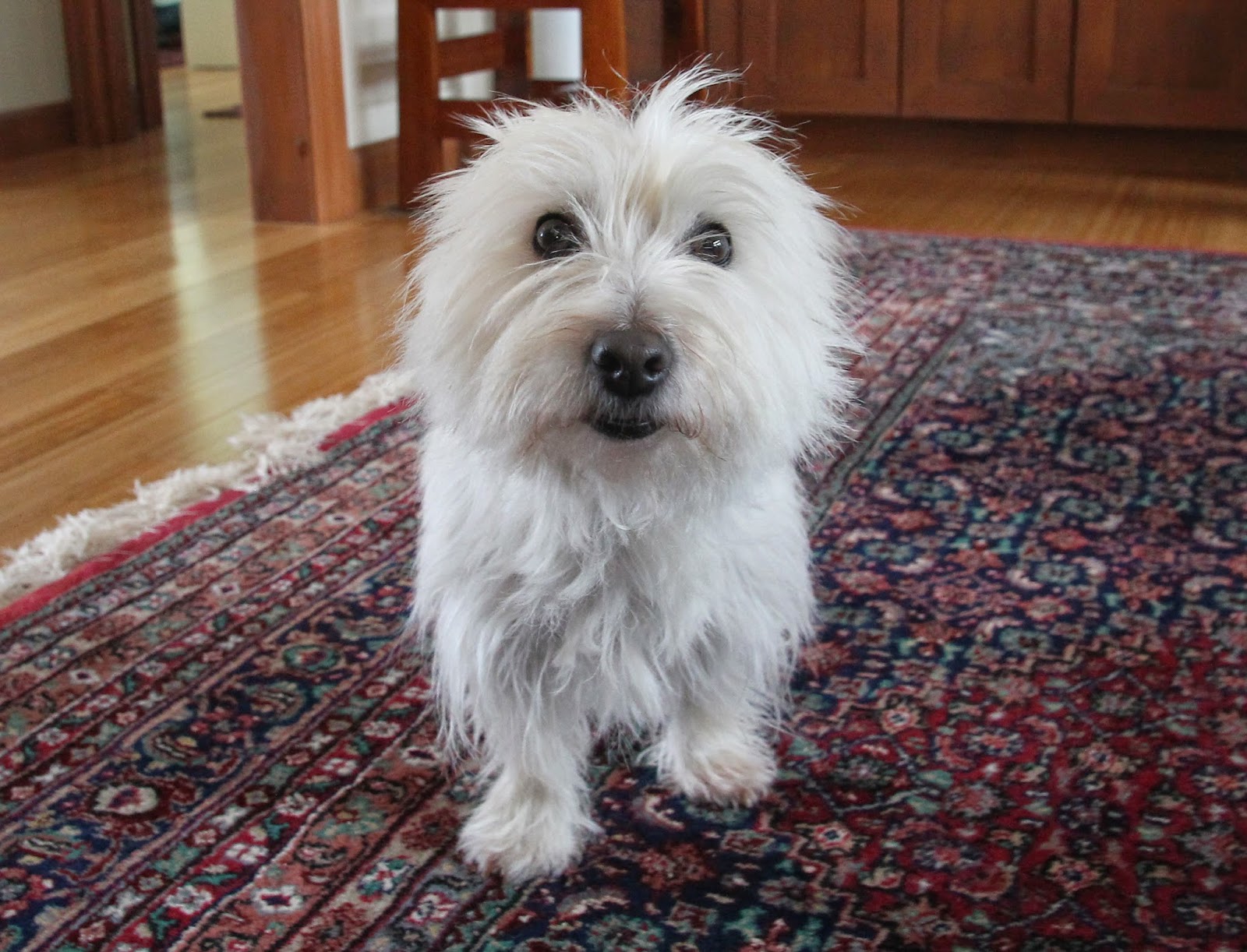 They are not fighting or even being mean to each other. But they are competing just the same. Who gets the first treat, who goes out the door first, who gets the ball. All our dogs sleep with us. Cosmo like to be down at our feet, or curled up in a ball behind our knees. Harper used to like to cuddle with Lee, or hang out on his side of the bed when he is out of town. When Heather arrived she decided she should get to sleep up by our heads. At first I didn't like this and tried to discourage it, but Heather can be very persistent. I
guess I have decided I don't mind it after all. 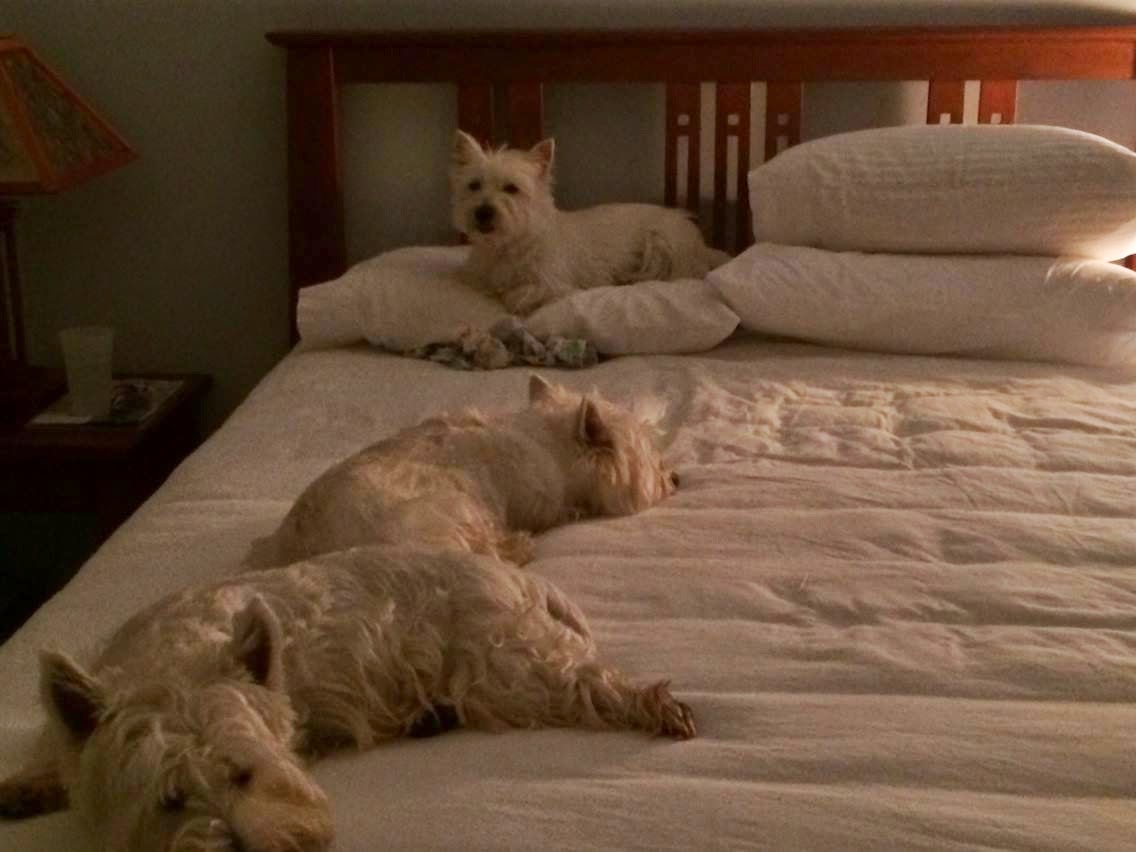 But sometime in the past week a subtle change occurred. Now sometimes Harper is sleeping up by our heads, and Heather is down with Cosmo, cuddling around our knees. The other night when I put the dogs to bed, Lee was already asleep. Heather marched right up to his sleeping form and curled up right next to the back of his head on his pillow! Harper was content to curl up on my side of the bed, so that situation is still in flux. 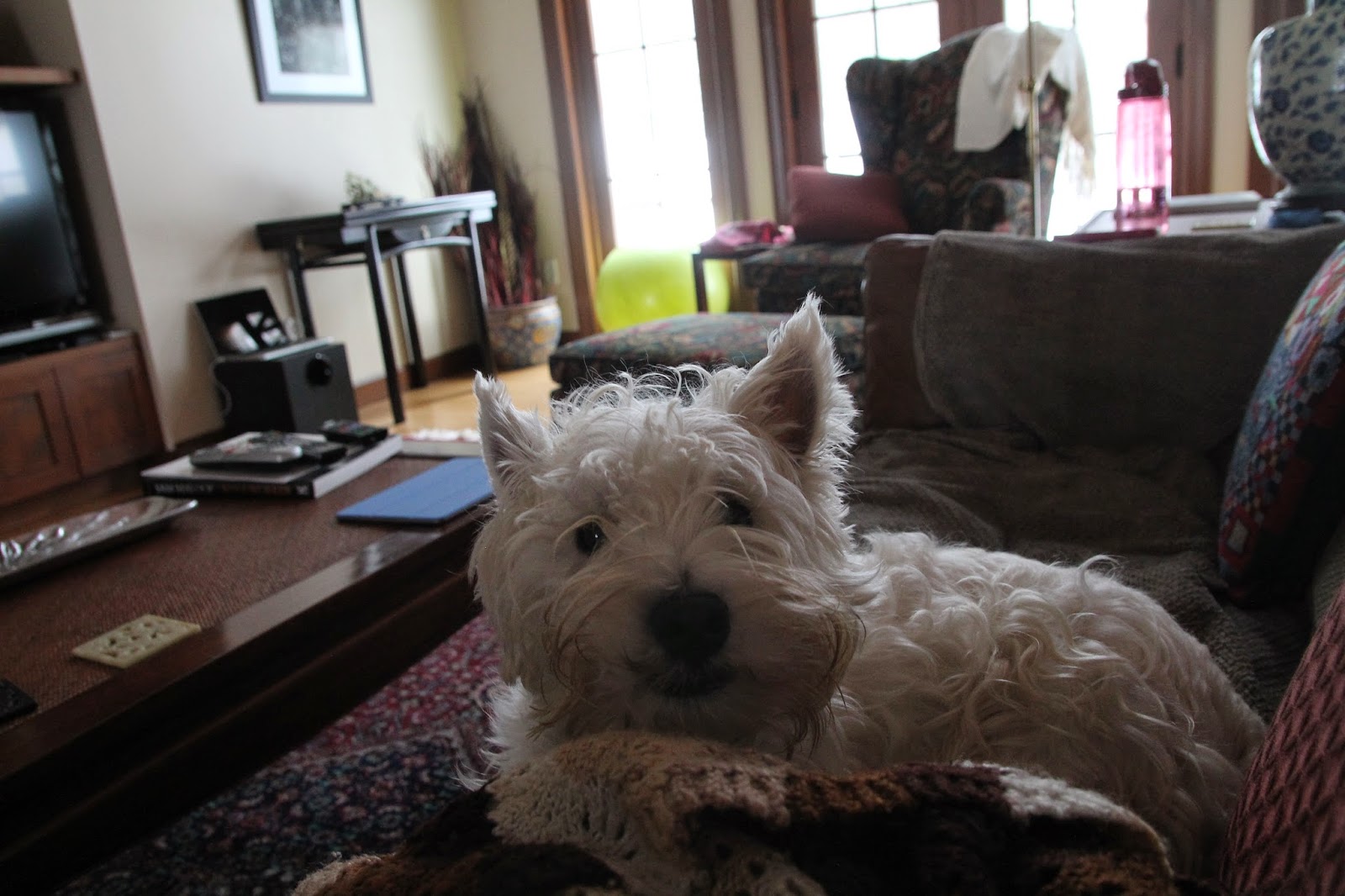 I know technically Lee and I should be the alphas in the household, and for the most part we are. But there is a pecking order that seems to be developing, now that we have three dogs. Cosmo is the man of this dog family. He's not competing with the girls, he knows his place as guardian of the yard border and marker of his territory. I think Cosmo gets a real kick out of having two women in his harem! He loves nothing better than to steal a ball from the two of them and run madly around the house or yard with the two other dogs in hot pursuit. And when Harper and Heather have finished their meals he has to lick every single remaining molecule out of their dishes. I sometimes find Heather's bowl pushed halfway across the room by Cosmo's ravenous tongue. 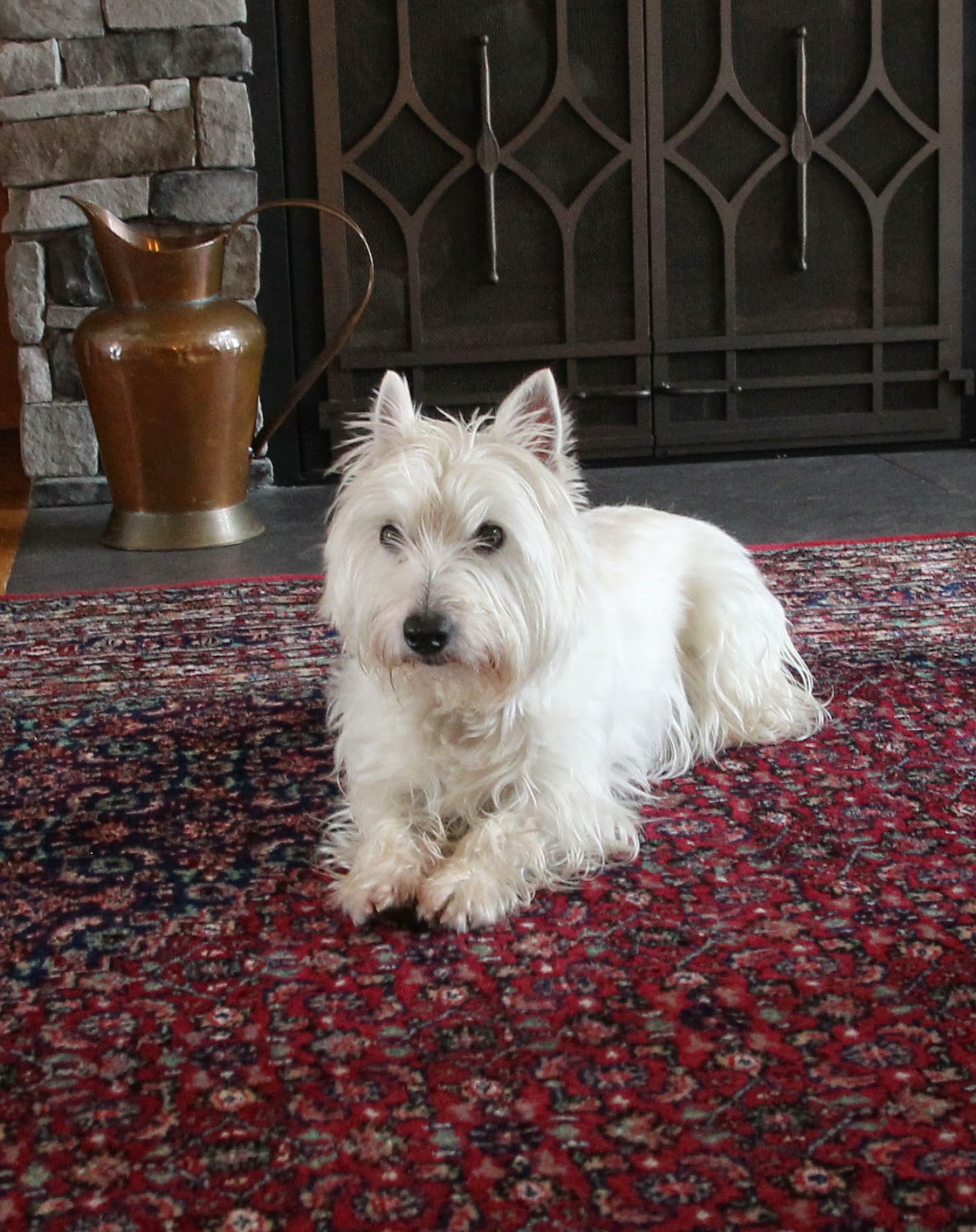 If I were to place bets on who will win this contest, I would guess Harper. Both girls are pretty stubborn at times, but Harper is more confident and assertive. It will be fun to watch how this evolves. Heather is still adjusting to life with the Nills. She still follows me around the house. She can still startle easily and become upset if one of us yells at a dog. She is such a sweet comical little dog, I feel bad for her when she gets anxious about things, I've speculated that something must have startled her before she went to live with Diane and Dennis, during that critical 12 week window when puppies form their opinions about the world. It's seems that things that take place at that point can have a permanent affect on a dog, not unlike Harper's aversion to vacuum cleaners.The cutest thing is when Heather gets anxious about something and then regains her confidence. She can go from an anxious crouch with her ears back and her tail between her legs to an alert stance with a smile on her face and that typical Westie exclamation pointed tail in a matter of seconds. As she gets more confident, will she challenge Harper more for the dominant female position? Maybe, we'll just have to wait and see! 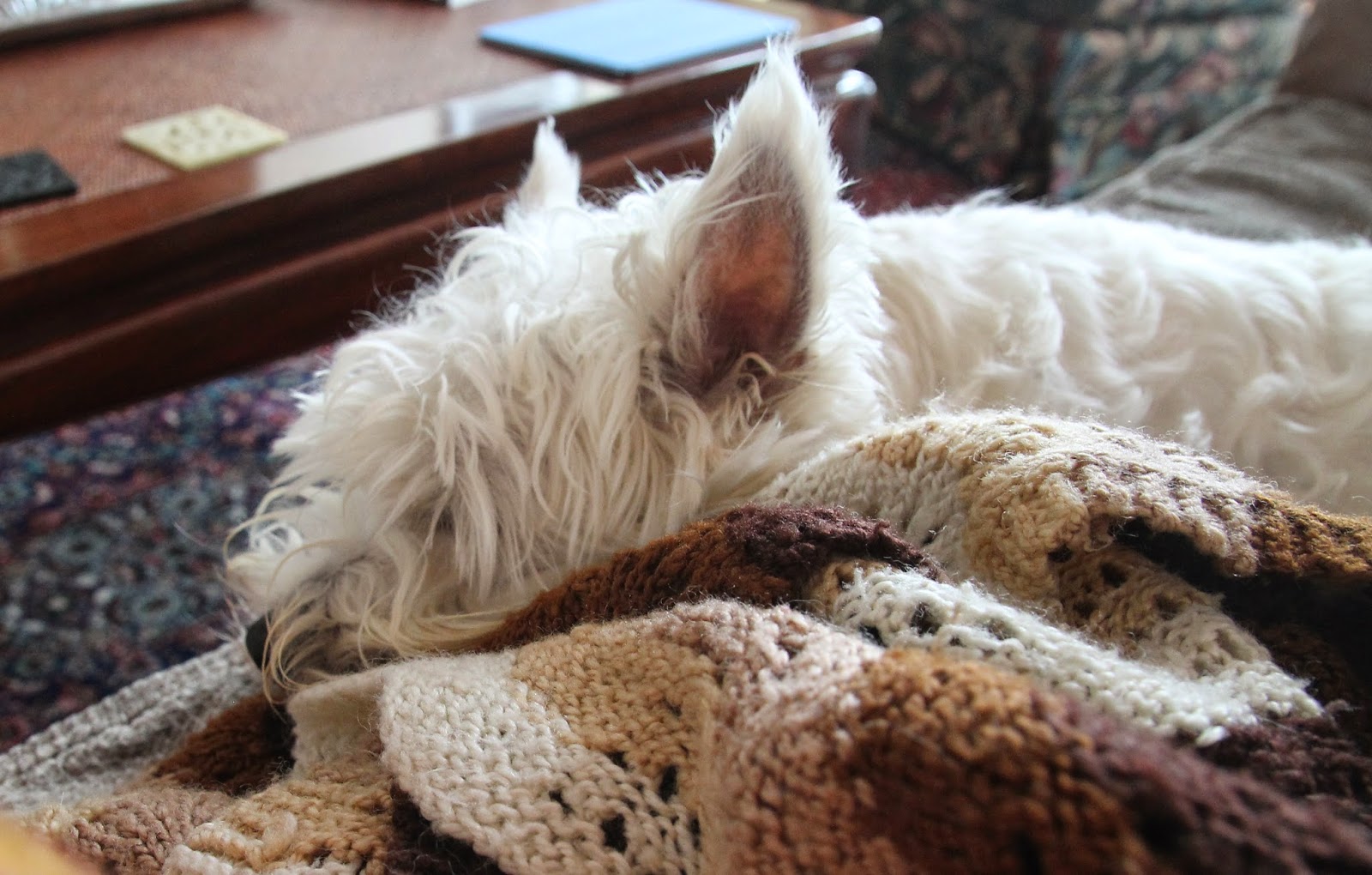