Hanging Out With Leo

We took care of Leo this week while his parents enjoyed some warm weather down in Mexico. We took Mika, their little rescue Westie, in as well, but we’ll get to her in a minute.

Sarah brought Leo over Monday night after dinner. They were leaving early Tuesday morning so that made sense. Leo likes us a lot and he ADORES his grampa, so he was happy to see us and not upset when mommy left.

We don’t have much in the way of toys, but for some reason Leo has no problem finding things to play with at our house. It wasn’t a bath night either so things were pretty laid back. He goes to bed around 7:30 so before too long we got him in his pj’s, read some books and said goodnight. When I put him in my office in the pack n play he wailed for maybe 45 seconds and then he was out like a light. 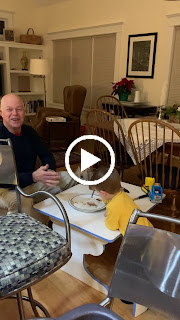 We are lazy grandparents so Leo still went to daycare every day, we just took things nice and easy and got him there around 9 AM each morning, and picked him up around 4. He loves breakfast so every morning he had a waffle and some fruit and maybe something else, an egg one day, peanut butter on the waffle the next. Then we played and got dressed before it was time to go to school.

We watched Sesame Street a little bit, listened to music, played elaborate games with wooden spoons, wire whisks, and dog toys. One evening he was playing “going night night” with Mika. Mika was pretty tolerant, but didn’t understand that she had a definite role to play. It was pretty funny. 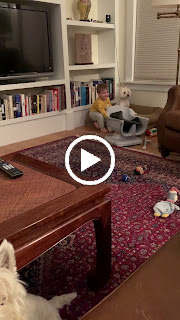 One night Lee made meatloaf for dinner and Leo loved it. He ate 3 helpings! The next night Lee made mac n cheese and we got a pizza the 3rd night. Neither of these dinners interested him nearly as much as the meatloaf. 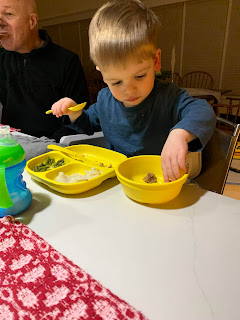 We did a couple of bubble baths with plastic cups and bowls. He was quite intent on pouring water from one cup into the bowl. He didn’t want to wash or get out so I washed him early and then let him play some more. He played until the water started getting cold and he STILL didn’t want to get out, but it was time. 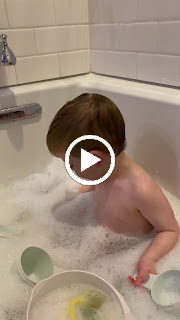 Leo is talking quite a lot now. Its still very hard to understand him sometime but then something will jump out and all of a sudden I know what he said. I was showing him my ceramic chain with all the Chinese zodiac signs. When we got to the rooster I said “that’s a rooster” and Leo said “cock a doo doo!”. He said “bless you!” when he sneezed. His parents have been working hard on getting him to say please and thank you. Without prompting he DID say thank you, several times, sometimes appropriately. Sometimes it would have made more sense for ME to say thank you….maybe he was just encouraging me!

Leo’s parents FaceTimed with him several times while he was here. Both times he didn’t say a word, just stared and stared at the little screen, with a small smile on his face. He knew who was on the screen all right, but I think it was just a little confusing for him. I know he misses his parents but he’s managed it pretty well, at least so far.

We really loved having Leo here. On Fridays he usually goes to Suzanne’s, Erik’s mom, so we kept that schedule, and on Friday I took him to Grandma H’s house. He was happy to see her. He’ll stay there until Sunday evening when his parents return.

Mika is staying with us until Sunday. There’s not that much difference between 3 and 4 dogs when it comes down to it. Mika is tiny compared to our dogs, and she usually has a puppy cut which makes her look even smaller. But she is one feisty little dog. She figured out quickly that Harper is the alpha and proceeded to challenge her, alternating play-fighting and trying to get in her space. Harper is so dignified though. She will play with Mika, but kind of regards her with a bit of detached amusement if Mika tries to take things too far. 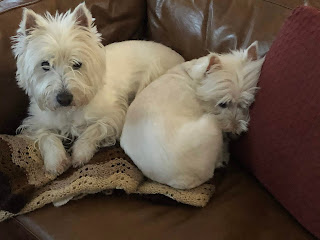 Mika is extremely food oriented. Because of Harper’s sensitive stomach our dogs get three meals a day, plus treats. Of course I couldn’t leave Mika out but I made sure I wasn’t feeding her more food than she was used to. But I had to guard the other dog’s food bowls or Mika would have stolen Heather and Harper’s food in a flash! At least Cosmo waits until they finish to lick their bowls!

We already miss Leo. We got used to having him around pretty quickly. Its going to be hard to not see him for two whole months while we are in Florida. We’ll just have to FaceTime I guess. 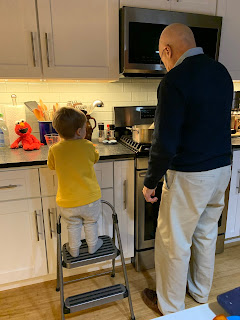