I swear I should start calling this blog klutzy woman tries activities beyond her coordinated abilities...but anyway...Harper and I have been taking Agility Training classes. This is a fun activity and a good way to bond with my dog. People get very involved in doing this, going to agility trials, getting ribbons and medals, etc. I think Harper would actually be very good at this if she had a different owner. She is smart, enthusiastic, energetic, and loves anything that involves hot dog treats! Unfortunately however, she's my dog, and this is the sort of thing I will never be good at. But we'll keep doing it just for fun. Who knows, maybe someday I'll be able to remember which hand I should have the clicker in, and how to get out a treat in a timely fashion!

Nadine, our instructor, took this little video of me and Harper doing a short course today. The "weave" around the little poles is really hard for me; I drop a treat, Harper goes into the poles, I click to reinforce, drop another treat, Harper goes into the next set of poles, I click, and on and on. Too many things for me to do at the same time! She loves the tunnel and the jumps. We're not quite sure what happened in the jumps, her leash either caught on a jump or she choked on a treat! But she was okay, whatever it was.

Nadine wasn't sure how to use my camera, but she did a great job taking this little video and I really appreciated it! That's Bentley, Amy's dog, at the end, smiling at the camera.

10 years ago tomorrow. Everyone in the US know where they were, and what they were doing when they first heard the news. In Columbia, Missouri it was a little before 8 am. I was pulling in to the parking lot at work, listening to NPR. The announcer said there was a report of a small plane crashing into the World Trade Center. Huh, I thought, and turned the car off.

I sat down at my desk, and went through the normal morning routines. About 45 minutes later I went upstairs for a meeting. A large group of people were gathered around a radio. One of the secretaries turned around and looked at me. "Pancaked. Just pancaked," she said in a heart-broken voice. I had no idea what she meant.

10 years ago. I was 49 years old. I had lived in Columbia, Missouri for almost 30 years, and thought I would live there forever. My daughter had just left for her freshman year at the University of Wisconsin. My son and my niece were sophomores at Rock Bridge High School, and my nephew was a 6th grader at Gentry Middle School. We lived in a big house out in the country. I was a computer programmer for the University of Missouri. We had a lab puppy named Marley. I rode horses, went for long walks, had a huge garden.

10 years ago. One of the first things I did was call Sarah. "Are you okay?" I asked her anxiously. "Mom," she said patiently. "I'm in Wisconsin". Then she paused. "This is big, isn't it," she asked. "Yes," I replied. "This is big. This is your generation's Pearl Harbor."

10 years ago. I cried and cried. I thought there would be a draft, and all of Sarah's young man friends would have to go off to war. I was thinking in simplistic terms, not imagining an enemy that would be so hard to find.

10 years ago, I wandered through Walmart, looking for an American flag to buy, but they were all sold out.

10 years ago, I stopped by the synagogue, tried to pray, but could not. I walked instead to Francis Quadrangle on the University campus. It was quiet and peaceful, a beautiful Missouri September day.

There is a full moon tonight. When I took Harper out to go potty before bed we looked up at the sky, smelled the clean clear air. There was a little sharpness to the wind, the first taste of fall.

10 years ago tomorrow was a beautiful clear blue September day. And tomorrow will be another beautiful day. I plan to go for a run, visit the farmer's market, take Harper for a walk. I plan to live my life, and that's the most fitting tribute any of us can make. We can live.

Email ThisBlogThis!Share to TwitterShare to FacebookShare to Pinterest
Labels: September 11

I thought I really was lucky when it came to my return flights from Malaysia to the US. Two days earlier and I would probably still be in Malaysia. Hurricane Irene had caused all the flights into Newark and Boston to be cancelled over the weekend, but I wasn't leaving until Tuesday. The airports were open, and Hurricane Irene had become tropical storm Irene, missing a direct hit on New York and Boston AND New Hampshire. I really was lucky.

I've become an expect at the extremely long flights from Asia to the US. I know how to manage things to minimize discomfort and sleep at least a bit of the time. I've had to fly economy more times that not, but Malaysia is really far, farther than Hong Kong, so I was very happy to be flying business. There's no such thing as a direct flight from the US to Kuala Lumpur, so that means you have to change planes somewhere along the way, and it usually involves a long layover waiting for your next flight. On the way to Malaysia that meant a 6 hour layover in Frankfort. On the way back, it meant a 9 hour layover at the Tokyo airport, Narita.

Strangely enough, I was able to kill several hours by walking every inch of terminal 1 in Narita, twice. I looked at all the passengers. I browsed throughout the duty free shops, the snack stores with scary candy and fish-flavored chips, the multitude of gates with far-flung destinations. I took a shower, ate snacks in the business lounge, read and played games on my IPad. Eventually 9 hours passed and it was time to get on my next flight.

We landed in Newark at 4:30 in the afternoon. My body thought it was 4:30 in the morning, but never mind. Immigration, the officer marveled at my fat little passport. That was odd. I mean, it's not like she's never met a frequent traveler before! What would she say to Lee's gargantuan passport, or Sherry Ott's? She'd probably pass away in a dead faint. The customs officer asked me if I was traveling alone. "Just you and Louie, huh?" "Who?" I asked, puzzled. He pointed to my purse, a (good) fake Louie Vuitton. "Oh. haha." I was so tired I didn't really have the energy to get nervous (besides it was 3 years old). I suppose because I hardly reacted he just waved me through.

I went to the business lounge, got some water, brushed my teeth. My flight to Boston was supposed to leave at 6:45pm, so I had lots of time. I checked my email, called my mom. As I was talking to her I noticed the time. Five after 6. Oh hey, I better get going! As I was leaving the lounge I realized that the gate had changed and I had a longer walk than I had originally expected. Oh well, just walk a little faster. I've got a first class seat, no problem, right?

I got to the gate around 20 minutes before the flight was supposed to leave. They appeared to be still boarding so I rushed to the bathroom. Then I proceeded to the gate. The flight attendant took my boarding pass and waved it under the infrared light, but instead of the usual beep it buzzed. "go see the attendant at the gate desk please" she murmured tiredly. Hmmm, what could be wrong?

I soon found out. Finally I came face-to-face with the fallout from Irene. Even though the airports had been open since Monday, airlines were still struggling to have the right planes in the right places. They were using a smaller plane for this flight, which meant there were fewer seats than passengers. My first class seat was gone, and there weren't any seats left in coach either. Yikes. They were asking for volunteers to be bumped from the flight, and somehow this caused a comedy of confusion and distress for several of us forlorn passengers without seats. First a young man that had been ahead of me in line was ushered onto the flight. The man that had offered up his seat was talking agitatedly to the flight attendant. "Wait, if you can't guarantee me a seat on the next flight I can't do this. I have to be home tonight." The young man that had taken his seat was ushered back off the plane. They asked for volunteers again. Once more someone gave up his seat. The flight attendants consulted, and this time I was let on to the airplane and the poor young man was left standing disconsolately at the gate. I got the last seat on that airplane.

Do I feel a bit guilty? Well yes and no. I definitely was a bit late getting to the gate, but there was no reason for me to think that I would somehow lose my first class seat. I felt badly for the young man, but then again, we had paid plenty of money for those business class tickets, so it really was more fair to give that final seat to me.

Well now it's Saturday morning and I'm home, safe and sound in New Hampshire. That long, long journey is over, and my jet lag is starting to recede. It's been a great adventure, living in Malaysia for a month, but I'm glad to be home with Harper. It's late summer, there are still tomatoes in the garden, and the morning temps are dropping into the 50's.

So, was I lucky, or just careless and a little stupid, or maybe a bit of both? Lee's grandmother used to say " you make your own luck." I would mull over this bit of wisdom sometimes. I tend to agree with Granny to a certain extent, but not completely. The people whose houses and cars were washed away in the floods from Irene certainly didn't do anything that caused Irene to swerve farther west, leaving the coastline and New Hampshire safe. But did I cut it a little too close in heading for that gate? Oh yes, I know I did. I can blame exhaustion if I want, and a business class lounge that never made any announcements regarding my flight, but I know the rules. Lucky or not, I was very fortunate to get on that flight. I may or may not be lucky, but I am certainly grateful! 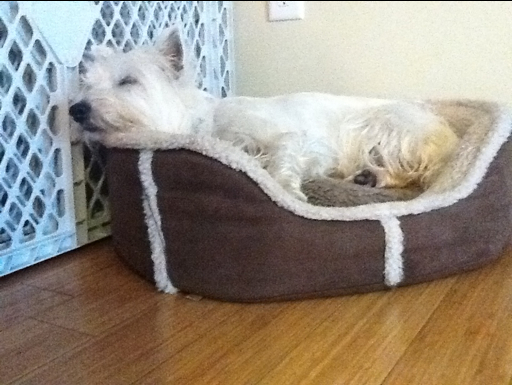