Well through these cold winter months we've made lots of progress inside. The interior painting is complete, both upstairs and down. Lee cut in along the ceilings and I did the rest, except for a few places in the stairwell that required scaffolding to reach; Lee did those. It was fun, in a strange way. I liked being useful, and I was pleased with out it turned out. You can see the light yellow color in the greatroom below. The bedrooms are a light grey. 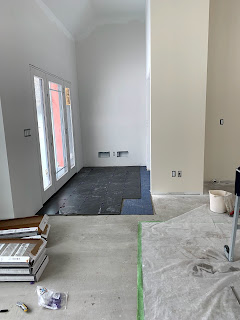 Lee has laid all the tile flooring downstairs, except in the master bath, because we didn't have all the materials for in there until recently. He did a beautiful job!

Then he did the interior window trim. I love it; it turned out great. 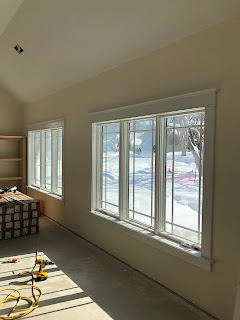 Then he started on the bamboo flooring. This was new territory for Lee; he'd never done such a large area of wood flooring before, and never directly on a concrete slab. But it has gone very well and looks great. 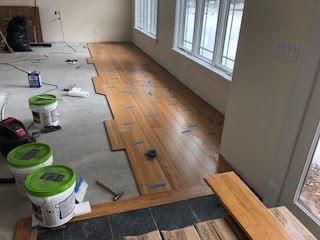 The greatroom flooring is almost finished. Downstairs he has to do the master bedroom, and the stairs, and then that's it for flooring downstairs. He won't do the flooring upstairs until after we move in. 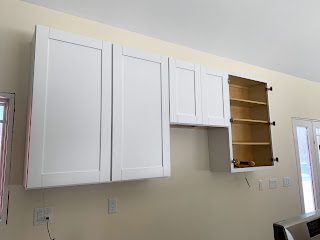 He has started installing the kitchen cabinets. He's getting all of them in place over the next couple of days because on Monday they are coming to measure for the sinks and countertops! After that it will be another 2-3 weeks before they are delivered and installed. 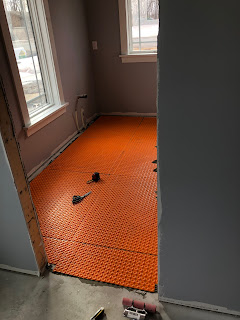 All the materials for the master bath are finally in so he's been working on that too. This is the heating system for the floor! We'll have a heated floor in our bathroom! 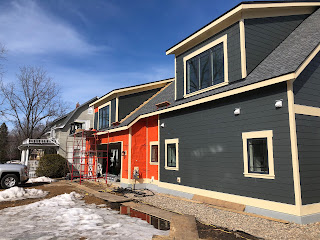 And every once in a while it warmed up enough so that the work on the siding could continue. All the gable ends and dormers are complete now, so its just the lower part that needs to be finished. There's still a lot to do but he'll get it done. 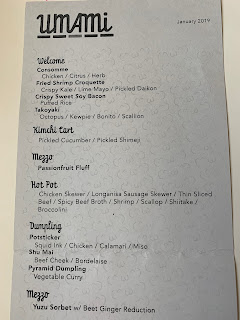 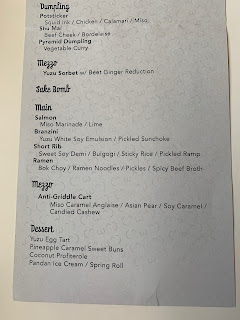 Well this is not how you’re supposed to do this. Don’t write about an amazing restaurant experience 2 months after it occurred, without notes. All I have is my failing memory, a copy of the menu, and some pictures I filched off of their Facebook site. But it was a memorable enough meal that I’m going to do the best I can with what I have.

Travail is a really cool restaurant, the kind of place you’d expect to find in New York City, or San Francisco, or LA. But Minneapolis has a thriving restaurant scene. Its one of the best things about this town. If we plan things right, and get reservations for a weekday night, and get them early, we can go to the hottest restaurants in town.

Travail has been called “food theatre” and I think that’s a good description. They do themes, lasting for 6 weeks or so, and they put on a foodie show of sorts. You don’t just make a reservation, however. You have to buy a ticket, and you put down a deposit, so you’ve paid for half of your prix fixe meal ahead of time, and it ain’t cheap, especially if you include drink pairings. Is it worth it? Oh yes!

Travail is normally located in Robbinsdale which is in North Minneapolis, pretty far away from Waconia. But they are renovating their space there and are currently residing in Uptown which isn’t nearly as far away.

We grabbed a reservation in mid-January for 5:30 PM on a Wednesday night. It takes a couple hours to eat there so that would get us home before we turned into pumpkins, hopefully. It was also before the Polar Vortex descended on Minnesota, so it was cold but not insanely so.

Sarah and Erik had told us about Travail and I was pretty amped. We just happened to get our reservations for their Umami-themed menu, which is their take on dim sum. Now we are dim sum snobs. We like the traditional Hong Kong take on dumplings and noodles so if they were going to be creative with one of our favorite foods it better be good! It was.

The menu wasn’t strictly Chinese Dim Sum. There were Korean and Japanese influences too, and other Chinese crusines too. 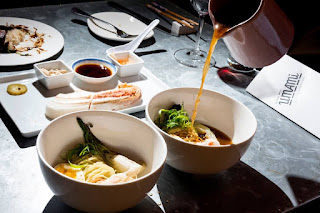 We scurried into the restaurant right at 5:30 pm and were quickly ushered to our seats. We were seated at a banquette in a room with other patrons, all attending the 5:30 “show”. It wasn’t long before things started. Little tastes came out, fried shrimps, crispy bacon, takoyaki. The other thing they brought us was kimchee, to use as a palate cleanser and a refresher between courses. My history with kimchee is not great. I tried it ages ago and whatever I had, I didn’t like, so I’ve avoided it ever since. But I wasn’t going to turn down anything at Travail so I gave it a try. Clean, crisp, refreshing. This wasn’t at all like the kimchee I had in the past. It was great, and really was a good thing to chomp on between courses.

After a passion fruit puff we had hot pot, which was our least favorite course. It was fine, just not amazing, and kind of a let down after the first sumptuous little bites. Oh well, on to the next course!

Dumplings! They were all great, but the squid ink black dumpling was especially memorable. 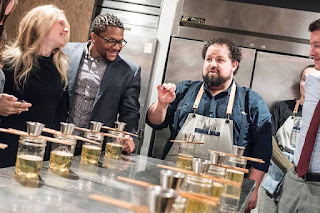 Then we were all instructed to follow our servers to another room. Glasses of sake were balanced on chopsticks over glasses of beer. “A sake bomb!” I exclaimed! The woman next to me said, “how did you know what it was?” I smiled because, well, how did I? Something to do with having kids in college in the early oughts, I guess. We followed instructions, slammed the table, and watched our glasses of sake (mostly) fall into the glasses of beer. I took a few sips but I wasn’t about to waste calories on beer at this restaurant, especially run of the mill beer. Fun though, and a good time for me to visit the rest room.

The main course included some delicious salmon, short ribs, and ramen. The ramen kind of put me into overload, and it was good, but not San Francisco good.

Lee passed on the desserts, but I sampled most of them and the few I couldn’t we brought home for me to devour over the next day or so. 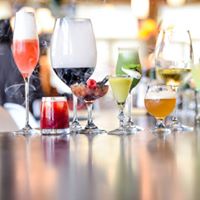 We got the drink pairings with our meal. I don’t remember most of them, except that they were very enjoyable and I was able to try them all, although I only drank half of the beginning cocktail since I was afraid I would be drunk before the meal had really started. I do remember a very good Pinot Grigio, but that’s about it.

We both had a great time, and intend to return. Its definitely pricey, but I’m already suggesting we go there for our anniversary, in June. And Sarah and I have said we’ll go there together sometime, but who knows when that will be, working moms, you know!

If you want to know more about Travail, here is a link to their website:  https://www.travailkitchen.com
Posted by Lynn Nill at 4:57 PM No comments: