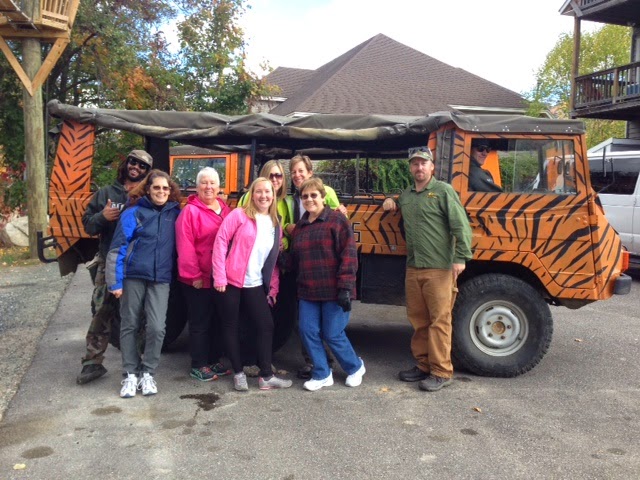 I wanted to go zip lining for a long time. I don't know why. I don't really like heights all that much, but I do like being out in the woods and nature. The thought of zipping around the tree tops, maybe waving at a squirrel or two, admiring the views and challenging myself physically appealed to me for some reason. So I added zip lining to my bucket list.

Zip-lining originally started in Costa Rica. People could zip around in the rain forest on their vacations. But gradually it spread all over the place and now you can zip line in many different scenic locations. There are zip-lining outfits in the White Mountains, less than two hours from my house. The time seemed right!

I asked for a zip-line gift certificate for Christmas, and I got one, but then there was a catch. Nobody in my family wanted to go with me. Lee hated the canopy walk we went on in Kuala Lumpur so zip lining didn’t appeal to him at all. Sarah was less than enthusiastic; Daniel was lukewarm on the subject. So I had to find some other willing participants.

I decided to ask some of the local Westie owners. I like them, we have fun together, and they are mildly adventuresome. A few said NO NO WAY, but I eventually I found 5 other ladies that were up for a challenge: Paula, Stephanie, Diane, Carol and Stephanie’s mom Kathleen. Ranging in ages from our late 20’s to early 60’s, we represented a wide range of athletic ability and physical bravery.

We eventually decided on a Friday in October for our adventure. It was the peak of foliage viewing season in New Hampshire that weekend, and we were afraid the traffic would be terrible, but it was no problem at all. We met in Manchester and drove together to Lincoln, New Hampshire, where Alpine Adventures would take us on our expedition.

We arrived, checked in, acquired our gear, helmets and Gopro camera. We piled into a standard van, and drove down the highway to the starting point. From there we clambered into a military style vehicle that took us up to our first zip. 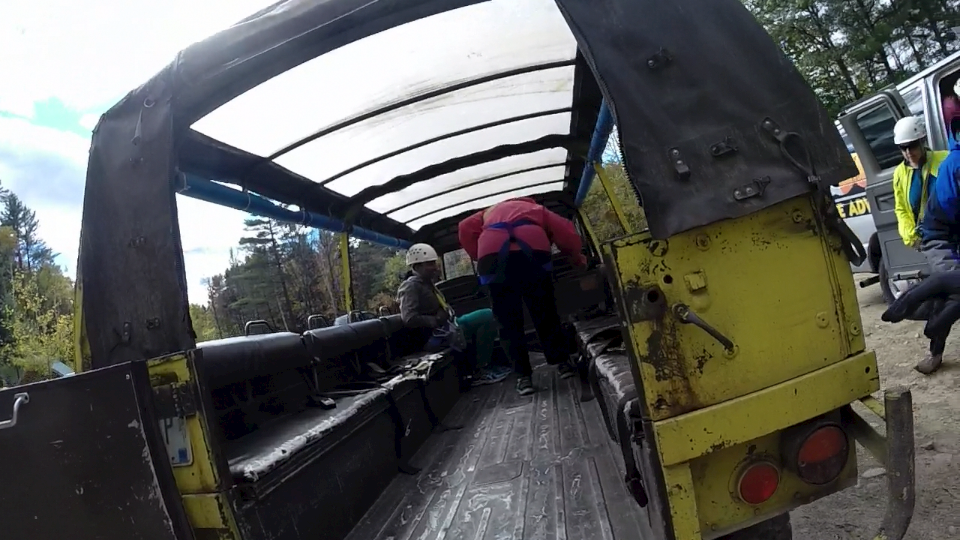 I have to admit I was very nervous for the first two zip lines. There wasn't a lot of expertise involved, and once I realized that I could just sit in the harness and not try to hold myself up by my arm, there wasn't a lot of physical challenge involved either. Our instructions were to keep our knees up and walk, run or step up to the platform at the end of the zip. 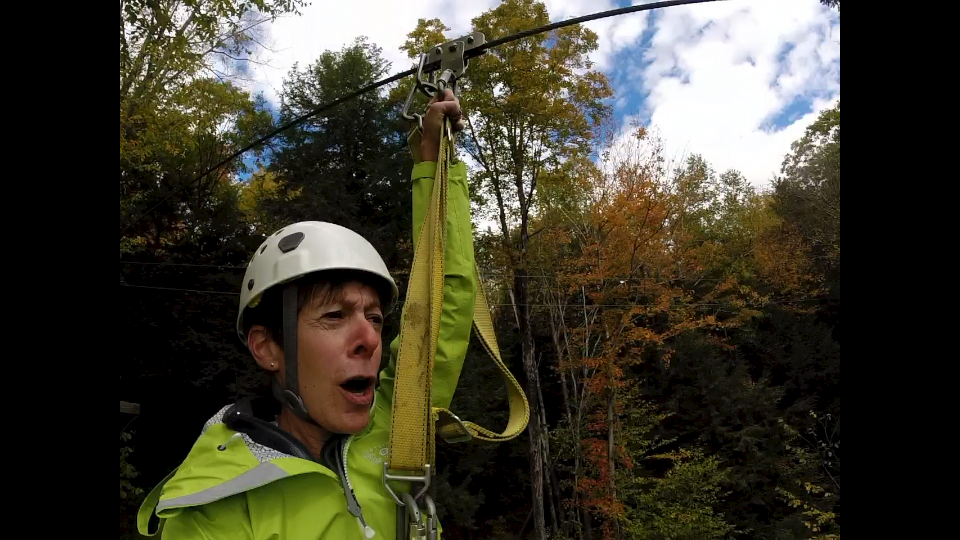 It’s hard to step off into the air and let the zip line take you at first! And there is a little strength involved in getting onto the platform at the end, but not a lot. The sensation of speed is amazing and the views of the leaves, mountains and trees in the distance were great. 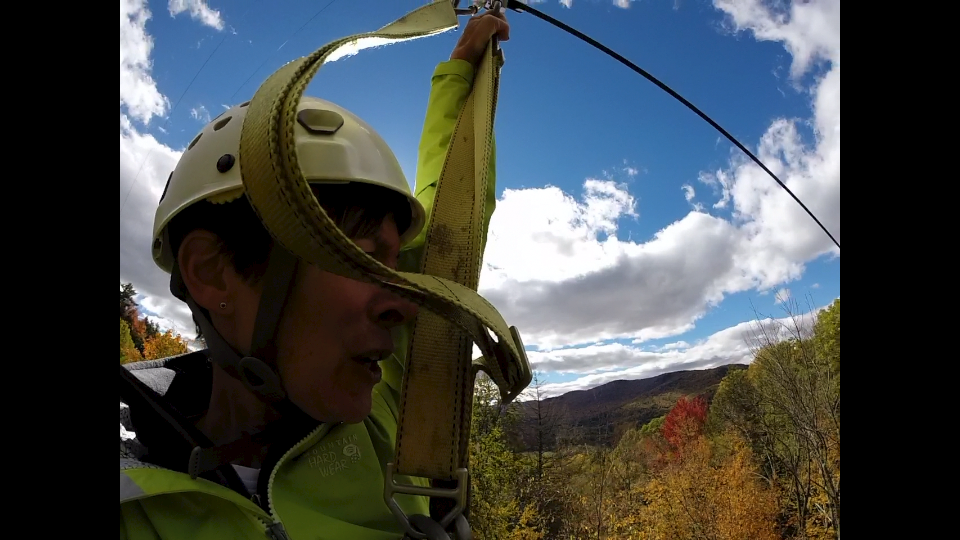 By the third zip line I felt like I was getting the hang of it. They had told us to turn the handle at the top to change the direction we were pointing but until the second to last zip I didn’t understand and kept trying to turn my body instead of the handle. Fortunately the Gopro camera caught some of the views that I missed myself.

The camera was a little distracting. Most of the time I wasn't very aware of where it was or where it was pointed. It’s amazing that I ended up with any useable video at all but it’s a very trouble-free contraption.

The very last zip involved a free fall at the beginning. It looked pretty scary and some of us had trouble forcing ourselves to step off into the air. Three of us did it backwards but that seemed horrifying to me. 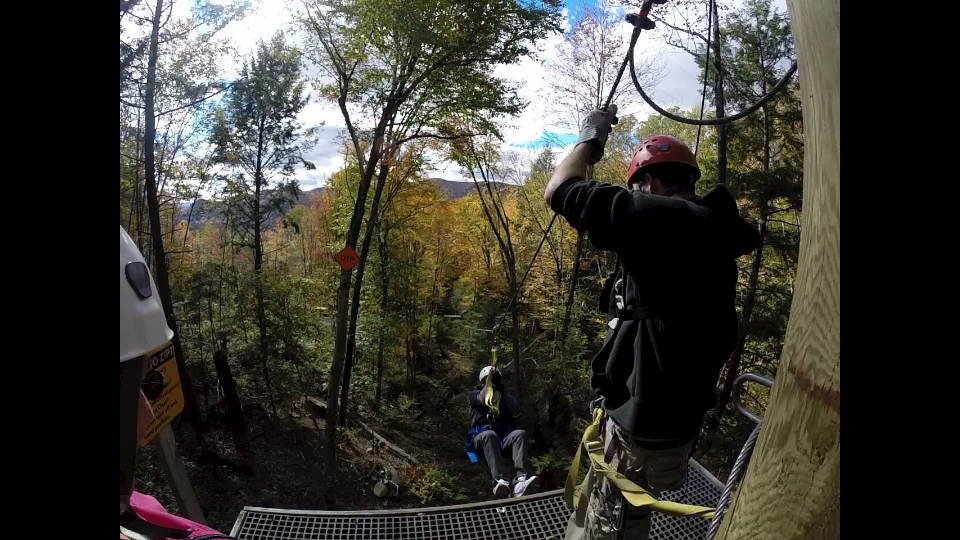 I kind of crouched down and ooched off the platform. Somehow being closer to the platform made it less scary. But the actually final ride was really fun! The zip line caught you pretty quickly and then you zoomed into the trees until your momentum ceased and you zoomed back. We did that several times, back and forth, until we came to a stop, clambered down a ladder, and that was it. 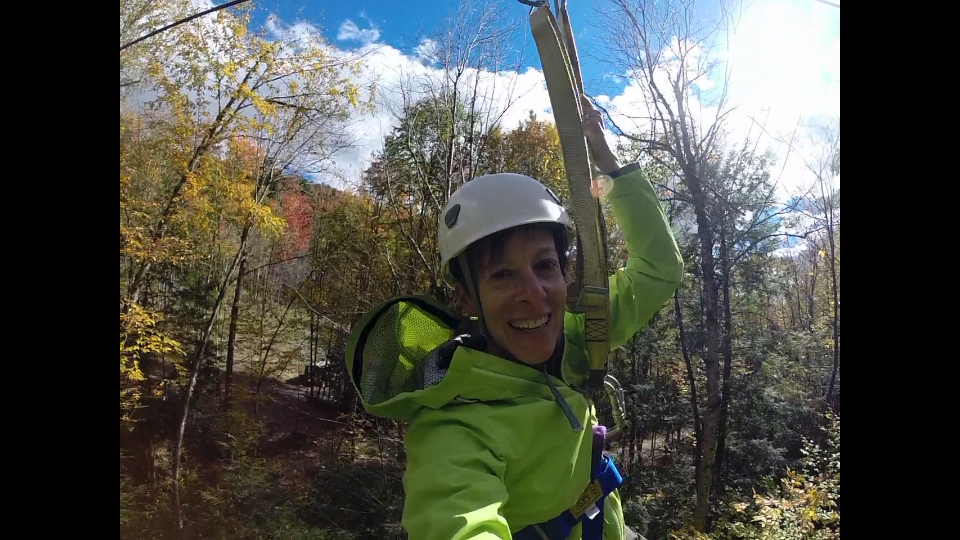 After our adventure we had some snacks and drinks at a nearby restaurant. When we went back to the parking lot to drop Carol off at her car some of us eyed a big slide speculatively. Paula and Stephanie said, “Lets do it!” At first I said no, but then oh what the heck! Three rides for $10 so we each did one. We grabbed a big inner tube and climbed up about five flights of stairs to the top of the slide. The instructions were to “keep your feet up” which I did with a vengeance. I’m lucky I didn't do a back flip! The other thing they said was “don't bail out on the slide”. Lord that would have been a BAD idea. 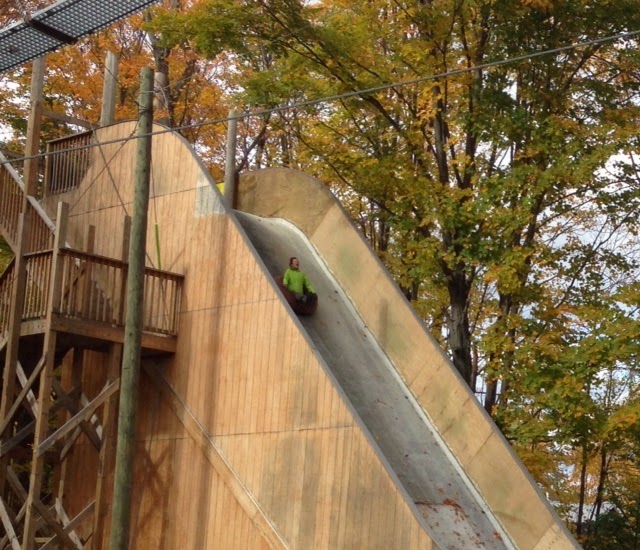 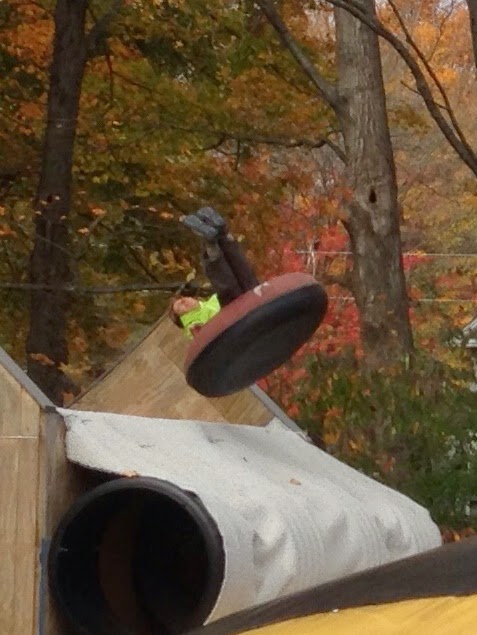 The slide catapults you into the air. Hanging on to your inner tube for dear life, before you know it you have landed in the middle of a giant air bag. Whoop! Fun! I crawled off awkwardly. Part of me actually wanted to do it again, but it was time to go home.

I want to do it again! There are two more levels of zip line at Alpine Adventures and I’d like to do the middle one. Its above the trees instead of among them, and involves some suspension bridges too. The bridges will probably give me fits but I’m ready to conquer new heights! 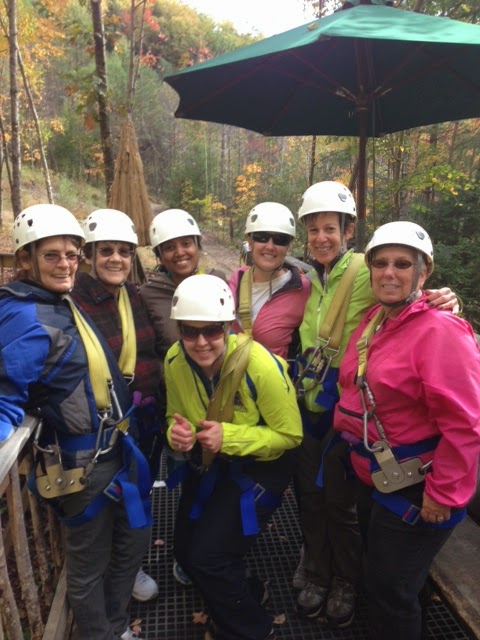