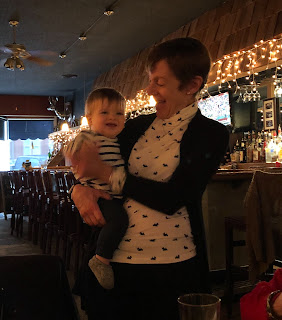 On Saturday, December 8th I went to Missouri with Sarah and Leo. it was Leo’s first big trip and Sarah didn’t want to do it  all by herself. I was only too happy to help, of course! Lee drove me to Sarah and Erik’s that morning and then Erik took us to the airport. We were bringing the car seat that Lee and I use, because its light and inexpensive so if something happened to it it wouldn’t be a big deal. We checked it so we didn’t have to haul it through the airport either.

When we got to our gate Leo needed a change before we got on the plane so Sarah took him to the restroom. They started calling our flight for boarding, but where were Sarah and Leo? Finally they reappeared. Leo had to undergo a full outfit change because he had managed to pee all over himself. Ah babies!

We got on the flight without any further mishaps. Leo was ready for a nap, but takeoff hurt his ears and he screamed until he finally fell asleep in Sarah’s arms, and stayed that way for the entire flight. 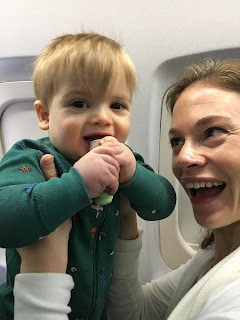 We arrived in St. Louis, picked up our rental car and drove straight to Michael and Jim’s house, our base for cousin and friend meeting in St. Louis. Soon my aunt and uncle, Ray and Al arrived, as did my dear friend Sarah Moore. Leo had a lot of fun exploring their rec room. He is very good at finding the very thing we don’t want him to find! My cousin Lisa dropped by too, in-between children’s hockey games. She said her daughter Olivia army crawled just like Leo and went straight from that to walking at 16 months. Good to know! Ray and Al brought Leo a musical book that plays a little song when you press a button. It took Leo no time at all to figure it out, and of course he thought it was amazing!

All too soon it was time to say goodbye and head to Columbia. Leo had no trouble taking a second nap in the car on the way, although it wasn’t long enough and we had to stop for a minute so Sarah could get in the back and provide a little entertainment (and snacks) for the rest of the ride. We stayed at Mark and Mary’s house while in Columbia. They are such good hosts, and Mary is an amazing cook. We had a delicious lentil soup for dinner that night, and really great food all weekend. 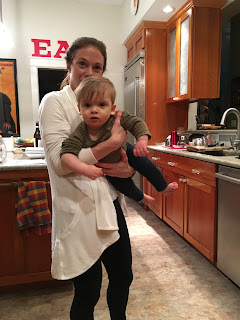 Sunday morning I take Sarah and Leo to Maice’s house for breakfast. They live in the Grasslands, a nice neighborhood close to the University. I can run from their house right to the rail trail, my old stomping grounds, where I first really started running, almost 26 years ago. It was cold but not Minnesota cold. I just zoomed along, well zoomed for me anyway. Then I ran back to their house to eat donuts and visit with Maice and John. 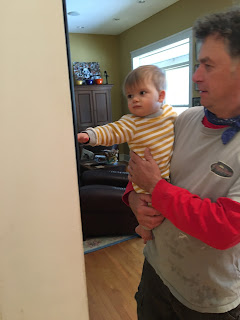 Later in the afternoon, Joanne, Elsa, Sam and Blake all come over to Mark and Mary’s house. Leo continues to explore, as much as we will let him. He is intrigued by Rosie the cat, who lets him get only so close and then slips away. The boxers desperately want to lick him, but their tongues are almost as big as Leo’s face and he doesn’t want any part of that! He is pretty fearless when it comes to animals, considering them just another part of the big wide interesting world that is opening to him more and more as he scoots about. 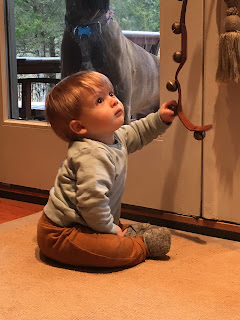 Monday we drive to Fayette and have lunch with Dot. Sarah comments on the way there that it has been a very long time since she has visited this small town outside Columbia where many of Lee’s relatives once lived. We pick up Dot at her house and drive to Emmett’s, a very good restaurant on the square. Emmett’s in itself is worth the 45 minute drive! Leo loves Emmett’s. There are twinkling Christmas lights throughout the restaurant and lots of people to flirt with too. He also loves Dot, who is dressed beautifully in a red blouse and a bright scarf. She looks great and is doing very well. It was so very nice to see her. 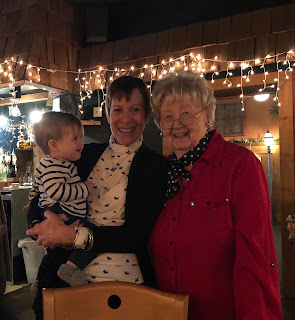 As we leave the restaurant I see a policeman eyeing my rental car and beginning to write a ticket because we parked in a handicap space. “Wait!” I shout. “We are with Dot Schnell! She just forgot her hanging tag!” He looks at me speculatively. “You know I even called the rental car agency,” he replied. “Oh well, I was pretty bored. Nice to see you Mrs. Schnell!” And that is how you dodge a ticket in a small town!

That evening Sarah goes out with Maice to help celebrate her birthday. Mary makes an amazing frittata for dinner, chocked full of mushrooms, cheese and potatoes. I make a pig of myself, until Mark says disapprovingly,  “Leave some for your daughter!” I have got to stop eating like I’m still training for a marathon. Well I did leave Sarah a slice. One.

Tuesday it is time to head back to St. Louis. It snows lightly all the way there. Fortunately the roads are not slick and I can see just fine. We stop at Kohn’s and pick up some corned beef for Sarah and Erik, some pastrami for Lynn and Lee, a couple of pickles and rye bread for sandwiches, and some ruglach to snack upon on the plane. Then we head over to Nancy’s for lunch. She is doing good, staying busy of course. She always has lots of friends looking out for her. Seeing her makes me miss mom; they were always hanging out together.

Leo falls asleep for about 5 minutes on the way to the airport. Then our return flight is a bit delayed because of the weather. The airplane had to be de-iced before it left Minneapolis and then de-iced again before we can leave St. Louis. Leo flirts with people behind us on the flight, then screams until he finally falls asleep. Poor thing. I worry that the people around us will hate us. Sarah has become a true mom, not worried about the others, just her baby that is struggling to get comfortable.
It was a great trip. I’m so glad we went. But I was really tired once I got home. I guess that’s why young people are the ones that have babies! But when Lee and I pick Leo up from daycare on Thursday I get a smile of total delight when he sees me. That’s what it’s all about. 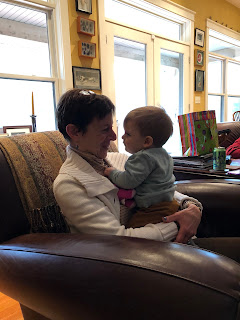