Its a 5 hour drive from Minneapolis to Saint Charles, Iowa, just south of Des Moines for a 3 day music festival. Its one of those things where people go to camp and listen to music, but we have the RV. My days of tent camping are long past. They provide electricity but no water or sewer. Dry camping makes me nervous because we haven’t done it very much. We have to be careful with water and the toilet but at least we have power and ac.

The weekend is supposed be beautiful with highs in the 80’s and lows in the 60’s. I know some of the bands from listening to Minneapolis’s great rock radio station, the Current, 89.3, but we are here mostly for Jason Isbell and Brandy Carlyle.

We have a nice camping spot but it’s a good thing it’s not raining because it would be a mess.  We meet our nice neighbors from Madison, Wisconsin, relax a bit and then head to the festival grounds.

We have wristbands for RV camping but it turns out we also need wristbands to get into the festival itself and then we need ANOTHER wrist band to be able to drink. It’s kind of ridiculous. 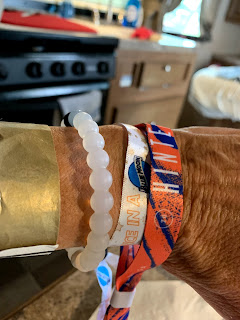 The sun is pretty warm even at 5 pm. I have a feeling we will be hiding out in the afternoon a lot. We spread our blanket on the hillside and listen to Jade Bird. I’ve liked a couple of her songs on the radio but an entire set of her is just ok.

I feel much much older than the last time we went to ACL, but that was 12 years ago so we’ll just see how this goes. Later this evening we’ll listen to Kacie Musgraves and Hozier. I hope to be able to run tomorrow morning but I’m not setting an alarm and I’m staying up past my bedtime. If the temperature rises much into the 70’s I’ll have to cut things short.

Toward the end of her set I decide not to stay and listen to Hozier. My eyes are tired and I like him ok but not enough to keep going. We head back to the RV and are soon comfortably in bed, which is when we realize that we can hear him just as well from the RV as we can anywhere else. He’s really loud! Oh well.

Lee turns on the white noise app on his iPad and that’s soothing. I have no trouble sleeping, but feel like I sleep lightly and wake up frequently. But in the morning my Fitbit says I went crazy with rem sleep. So strange. I manage to sleep until 6:40 which is good in the sleep department, not so much for running.

I’m not out the door until around 8. It’s pretty nice at first, but warms up quickly. its ok though, this is an easy 6 miles on the training schedule and I’m supposed to run it slowly. I run into the little town of Saint Charles, about a 1/2 mile down the road. This is Madison County, of the Bridges of Madison County fame and sure enough there is a little park with a covered bridge at the edge of town. I decide to just run up and down the town streets. I can manage two miles of this before I have to turn around and retrace my steps. I’d rather do this than run out alone on country roads.

About halfway through my run a whole bunch of runners show up running the other way. “What is this?” I ask. “Is it a race?” “No it’s the Hinterland Music festival fun run!” Huh. I guess I missed that announcement. Oh well! Later some walkers ask me why I’m not running with the other runners. “I just run to a different drummer,” I laugh.

After my run we decide to walk to festival for lunch. The entrance closest to us is for VIP only this morning. They keep changing the damn rules. I decide on smoked mac n cheese with smoked chicken, Lee get Japanese noodles with tofu. The food here is pretty good, not ACL good but but this ain’t Austin so hey.

We talk to some young girls that are tent camping and they are close to the camp stage where they didn’t stop playing music til 2 am. Good God. I walk around and look at the stuff for sale. You can get frozen drinks at one stand and then get them spiked with alcohol at the stand next door. This sounds yummy, but for later. There are some nice T-shirt’s but I’d HAVE to get rid of some of my old ones. We’ll see.

Before we go back to the RV we accidentally listen to someone named Adam Bruce, who sings country music and is from Des Moines. He’s nice, we both like him. Then we head back to the RV to rest a bit

At 1:30 go back to listen to John Moreland. He is a BIG man, with catchy country lyrics. He only plays for 30 minutes and it’s not long enough.

I fulfill one of my longings and get an ice cream sandwich. Yummy, and very rich. I can’t finish it.

The sun is really beating down so it’s time to chill out in the aircon at the RV again. I stay here until I’m bored and then go back and listen some more. Its not a bad way to spend the day!

We head back in time to hear the Wood Brothers at 6:30. Later all I can remember is that they were ok but not much else. Then at 8 it’s St Paul and the Broken Bones. I’ve heard some of his music on the Current and I like him, but WTF! Out comes this short plump balding white guy with glasses and a silvery sparkly cape and a horn backup band that’s out of this world. I had no idea what this guy looked like. I had no idea he was WHITE! I truly expected someone like Smokey Robinson to appear. He sings in a beautiful high falsetto and man does he have soul. He’s amazing. He’s the best act of the festival by far so far. I would definitely go hear him again.

Then it’s Jason Isbell, the reason we are here to begin with. He’s an amazing songwriter, a great guitar player, and his band is good too, BUT. They are loud. It’s late. They’re playing a lot of southern style rock songs. We both wished it had been more of his acoustic stuff but oh well. We actually leave before the end. And we’re in bed by 11. 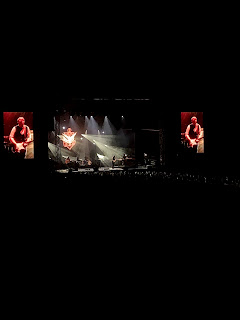 I wake up at 6 and I know if I have any chance of doing at least part of the long 10 mile run scheduled for today I’ve got to get up. I’m out the door by 7:30 and it’s already almost 70. I run into town, .6 miles. Then I make a 1.5 mile loop around town. Each time I get back to the beginning of the loop I tell myself I can stop if I need to. At 5, 6.5 miles I’m still good, so I keep going. By 8 miles, however, it’s time to call it a day. By the end I’ve slowed considerably, and I’m feeling a little dizzy too. But a little air con, a little water, and then some food and orange juice and I feel fine. I don’t usually bail on runs no matter what, but this was the right choice.

At 2 go to hear  Ruston Kelly and War and Treaty. It is beastly hot. They are both good. Ruston Kelly is kind of wry and irreverent. One of his songs has a refrain that goes “basically I’m an asshole”. War and Treaty are kind of r&b, energetic, large African Americans. Incongruous in this slate of mostly rock and country bands. I liked them but it was just so hot.

We retreat to the RV to nap and snack until around 6. Its so much better as the sun starts to go down. I stand in a very long slow line for a gyro for dinner. I guess I’m not the only one that’s tired of fried food. It’s worth the wait though, fresh and delicious.

Maggie Rogers is young, beautiful, talented, a joyous stage presence. She’s fun and I’m going to listen to her more.

Brandy Carlyle is AMAZING. I love her. Not only did she sing a bunch of her songs but she also talked about how much she loves Joni Mitchell and sang “A Case of You”. She made me smile, she made me cry. Perfect way to end this weekend. 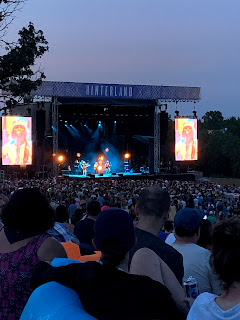 So, would I come back to Hinterland? Right now, I don’t think so. It was fun, but it was very hot, and if it had rained it would have been awful. I like listening to music and the fun thing about festivals is getting to hear music I wouldn’t normally hear. But because of the heat I just couldn’t tolerate sitting out there for long periods of time. And I would have preferred more variety. I like country; I like lots of different kinds of music. But southern Rock is not my favorite genre and there was just too much of it for my taste.

Am I getting too old for this shit? Maybe. I’m not going to say never again but right now the thought just does not appeal. But I’d go see St Paul and the Broken Bones again in a heartbeat. Wow. 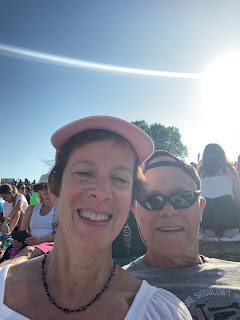