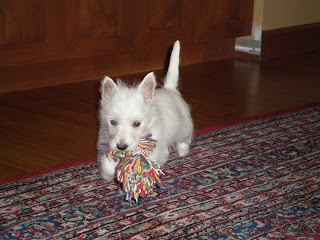 The blog title is a reference to a recent broadcast on This American Life, an NPR radio show, about a man that tried to start a “puppies” cable TV channel…all puppies, all the time. Well we’ve started our own puppy show, right in the Nill’s kitchen. We are the proud momma and papa of a Westie puppy. Her name is Harper, and she is seriously cute. She’s pretty good too, for a baby. At ten weeks she’s sleeping through the night, and beginning to whine a bit when she needs to go out. She won’t have accidents in her crate or in her puppy playpen, but if we let her out into the wild freedom of the house she doesn’t understand yet that going potty in the middle of the living room floor is not okay. But she’s smart, and she’ll get there.

It’s been a long time since we’ve owned a dog, I think around six years. Our last dog, Marley (yes the name coincidence is a little much), was a much loved yellow Labrador retriever. Marley was very, very sweet and we all loved her dearly. She was the first and only dog we owned as a family. We bought her when Daniel was in tenth grade, and she was his dog, but I managed to fall head over heels in love with her. Being a big, ungainly, frisky lab, she was a challenge to train. When she died at three years of age she was just beginning to calm down and become more manageable. 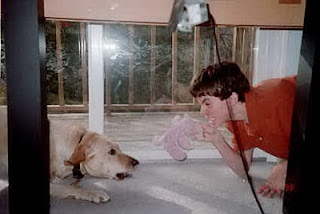 Marley’s death was a grisly horror. She was hit by a car in front of our house, dragged fifty feet down the hill with a look of terror on her face that I will carry with me to my grave. I still have flashbacks from that moment, although they have faded with time. Acquiring Harper has made the flashbacks return, somewhat to my surprise. She doesn’t look anything like Marley, but Lee and I both mistakenly call her by the wrong name, and I am struggling a bit with the inevitable process of falling in love with a dog again.

Lee has been saying he wanted another dog for a long time. Up until our move to New England, however, our lives were too much up in the air. To have a dog in Hong Kong would have necessitated having an amah to take care of it, and since we didn’t want a live-in helper that meant no dog while we lived overseas. But once we were settled in New Hampshire it was a foregone conclusion that we would soon become dog-owners again.

Lee soon started researching good breeders in the area. He found Diane, a Westie breeder about thirty minutes north of us, with a very good reputation. We went to a puppy “open house” in January, and I was sold on getting a Westie. They were beautiful, well-behaved, friendly, little, portable dogs. They seemed perfect to me, but Lee wasn’t convinced.

He found another breeder with a pair of Goldens. I thought Goldens would be acceptable. I knew I could never handle having another lab, but Goldens might be okay. Her dogs were beautiful, but huge and not very well-mannered. If that’s what Lee wanted I would let him have his way, but I knew it would be hard. The thought of owning one of those dogs brought tears to my eyes, so that wasn’t a good sign.

I let Lee mull it over for awhile, and much to my relief he came to agree that the Westies were the best choice. Now all we needed to do was wait for the next litter.

We brought Harper home a couple of weeks ago. Lee takes her out in the morning and evening and I take care of her during the day. Of course right now she’s a lot of work. She has to go potty almost every hour. She needs to be fed, watered and played with regularly. I can’t go into the city for the entire day until she is a little bigger. Part of me is going “why did we do this”? But the other part finds her entertaining and adorable. 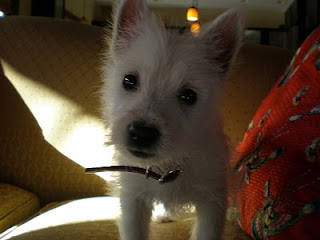 I know I’m holding back though. I don’t want to get my heart broken again by a dog. I look at her fragile little ears, nose and belly and think, lots of things could happen to this animal. She’s just a dog; remember that.

And at the same time I know. We don’t get to choose really who or what we love, and if we try to avoid the pain that life brings, well we’ll end up avoiding the joy as well. So I know despite my caution that I’m probably a hopeless case, about to fall for a dog again. Puppies puppies puppies puppies puppies….. 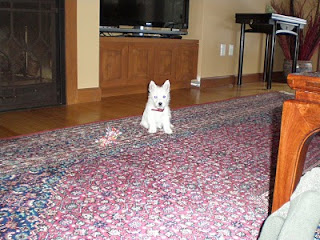