We are so close to being able to move in, and at the same time, there is still so much left to do to get our occupancy permit that it seems pretty daunting. We'll get there, I know we will, its just a matter of keeping at it.

Since I last sent you all an update so much has been accomplished. The kitchen is complete, except for the knobs and drawer pulls; they are next on my list. 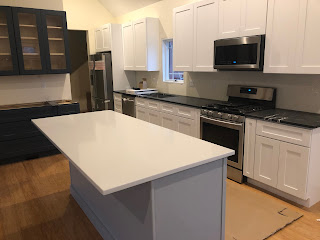 The HVAC is done and the fancy thermostats are installed. 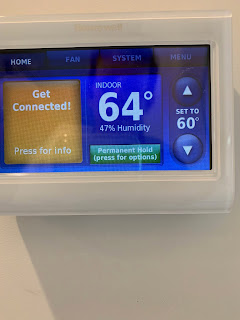 I have to learn how to program them, but it will be very nice to have thermostats that can be on a schedule and changed remotely.

The plumbing is done; we have water, both hot and cold; toilets, including the one with the fancy seat in our bathroom; a water softener, and an arsenic removal system. Yes, arsenic is apparently a problem in this part of the midwest. We had to get our well tested, and although the levels are very low they are slightly above the recommended level, so better safe than sorry.

The electrician has completed his work, mostly. The lights are all installed, but we're having an intermittent problem with breakers tripping. We can't get them to trip consistently so its hard to say what's causing it. Lee says it has something to do with the new requirement that all plugs have ground faults and wires arcing, or something like that.

I love the lights in the kitchen, and the dining room chandelier. This is the first time since the house we built in Missouri where we got to pick out all the lighting ourselves. I like the lights in our bathroom, but they're a little smaller than I would like, and they're not going to be bright enough for putting on makeup. I guess I'm going to have to invest in a lighted makeup mirror. I've wanted one forever anyway.

The light over the entryway is so cool, but the chain that came with it isn't long enough, so we have to fix that. Then it will hang below the timber beam in the front of the house but then we'll have another problem because it if is really windy it might start swaying and hit something. So Lee will rig up something to keep it from swaying; he'll figure it out!

We have ceiling fans in virtually every room; that's something I've really missed. We just bought inexpensive ones from Home Depot, but they look really nice! I especially like the one in the master bedroom for some reason. 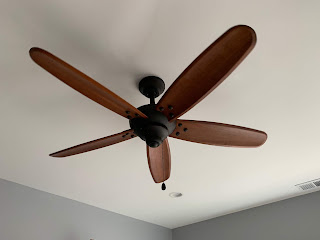 So what is left? The siding is almost finished! Lee is doing the upper part of the first floor now; it takes scaffolding to do it; but a nice neighbor lent him some. The siding itself is going fast, but he still has to caulk and paint the trim; that's taking longer than he would like. 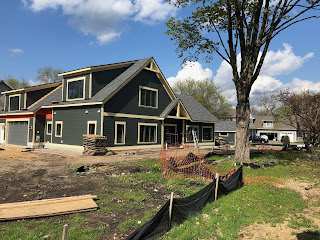 The stairs have to be completed, he's working on them as I type. They should be finished in another couple of days. Then we need interior doors, and baseboards, and the flooring in the master bedroom, and the shower tile in the master bath isn't quite finished. Mirrors. Bits of woodworking here and there. The shelves for the pantry, linen closet and the entry closet.


Most of the inspections have gone ok, but Shorewood requires a "blow test" to insure that the house is insulated properly, and we've got a problem. We've failed the test twice now. We thought the main problem was with the fireplace, but they pulled it and put a bunch of foam insulation around it and that wasn't enough. One of the INTERIOR walls is cold, which means that air is getting into it somewhere. The problem is, they can't figure out where, and they probably won't be able to without tearing into the drywall. So, they are going back to the inspectors, and hoping that they will allow us to skip this test. I don't have a lot of hope for that however. Shorewood is notorious for being super-picky.

Although its not a requirement for an occupancy permit, we want (and need) a finished pantry and closet or two before we start living in the house. Lee decided that I was perfectly capable of installing the Elfa closet in our bedroom. At first I was apprehensive, but then he said "oh its just like putting together Legos!" and then I was in. He did the basic tracks, which require a drill, but I did the rest. It was fun, and very satisfying, and came out pretty good, if I do say so myself! 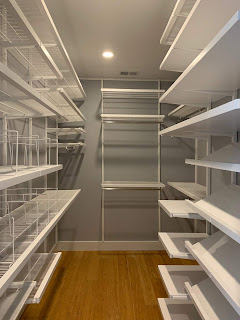 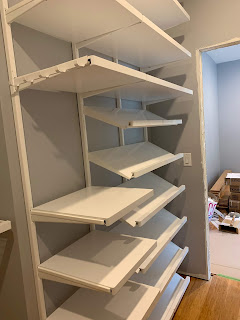 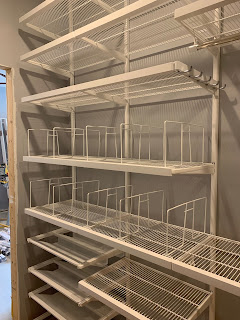 So, the movers come on the 27th, and that night we will move into the RV at the KOA in Jordon, where we first stayed when we moved here a year ago. We'll finish moving out of the rental, get it cleaned up, and do the rest of the stuff we need to move into the house, hopefully by June 9th. It won't be "finished", not by a long shot, but it will be well on its way to becoming "home".