Boston on the Fourth 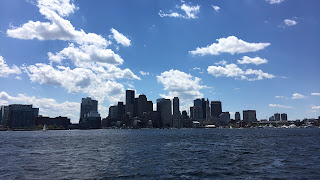 Usually we spend the Fourth of July on our boat in the harbor at Salem Massachusetts. We watch the fireworks from our boat. We can see the fireworks from all the little nearby towns, Lynn, Marblehead, Manchester by the Sea, Beverly, as well as Salem's. It's beautiful and peaceful and we don't have to deal with crowds or traffic.

But Boston is supposed to have wonderful fireworks, and an old friend of Lee's from China will be in town with his family. We decide to go to Boston on the fourth. 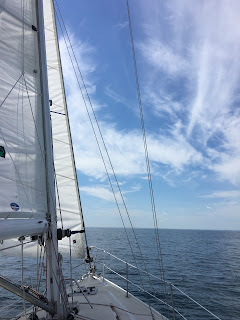 We spend the night on the boat in Salem Sunday night. Dinner is on the boat, grilled shrimp, nice salad. Monday morning we sail to Boston. There is enough wind so that we can actually sail down to Boston, but but we take the sails down when we enter Boston harbor, and just motor. We stay at Constitution Marina at the mouth of the Charles River.  We are in an outer slip. The sun is bright and hot but there is a breeze.

We meet Lee's friend Benjamin, his wife Doris, and their little boy Johnny for dinner. Benjamin and Lee used to work together in Asia. Benjamin and Doris have very good English, and even  5 year old Johnny knows a lot of English. They are on a grand tour of the US and just happened to be in Boston on the Fourth. They didn’t even know it was a holiday until we told them! And actually I understand that very well; It took me awhile before I knew the holidays in Hong Kong. They want to try local food so we go to Legal Seafood Osteria, which is right nearby. We order oysters first. Everyone enjoys their sweet and salty New England taste. They have the tuna and the cod for their entrees, although Johnny has the kid’s pizza.

In the morning I have a 6 mile run to do. As I'm warming up outside the Marina a guy starts talking to me. He asks me if I've run the Boston Marathon. I tell him I can't qualify because I’m too slow, but keep searching for a waiver bib. His name is Richard. He’s a Boston marathon bombing survivor, so he gets free bibs every year. He gives me his card, and tells me to get in touch with him this fall. Well! You never know! I Google him when we get home. He’s a real live hero. He finished the race and then ran back toward the bombs when they went off and saved a guy’s life. I’d be honored to get a bib from him, but I’m not getting my hopes up. I know by now how hard it is to get any sort of bib for Boston. 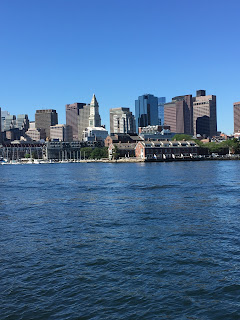 In the morning we take Benjamin, Doris and Johnny for a ride around the harbor. Then we say goodbye and get ready for our next set of guests. The Westie Executive Committee has come to Boston to celebrate the Fourth with us. We’ve got hot dogs, burgers, chips, drinks, salads, and a Flag Cake for dessert! We’ve got  8 people on the boat again but this time we don't go anywhere, we just hang out at the marina. AmyC comes for the first time. She is afraid of the water but she is just getting braver all the time. And AmyD clambers on and off the boat with ease. We have a nice time, talking, laughing, watching all the boats. 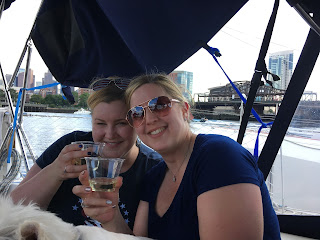 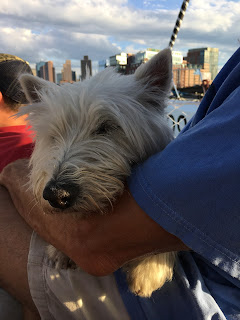 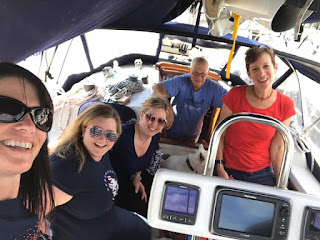 Its fun to watch the boats streaming through the Charles river locks to get a good place to watch the fireworks. We figure out that the half shell where the Boston Pops play and the fireworks are set off is actually pretty far away. In my mind I thought they set them off right over the harbor, but I’m wrong. They close the locks before the show starts, otherwise the Charles would get so crowded nobody could move. We couldn't take a sailboat through the locks anyway. 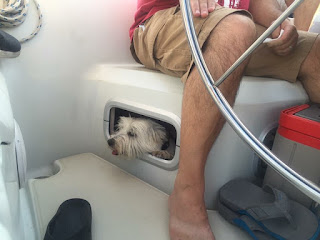 Our guests leave before the fireworks start. They have to work and some have dogs that don't like fireworks. 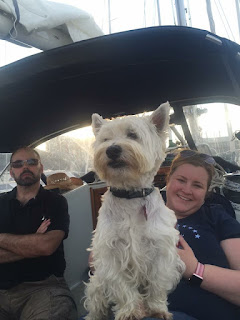 The show doesn't start until 10:30 PM, way past our usual bedtime. And  we are too low to actually see them properly. We can see them a little through the bridge but we're too sleepy and go to bed. 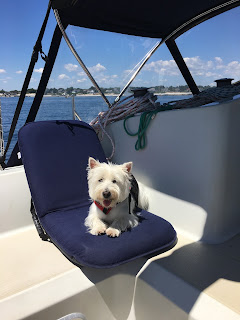 The next morning is beautiful. We have flag cake for breakfast and then motor home. Its a sunny, calm day. Hot sun, crisp air. Perfect New England summer weather! 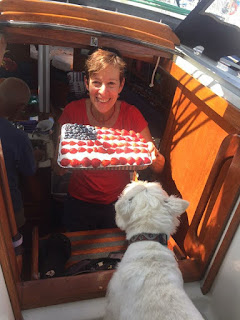