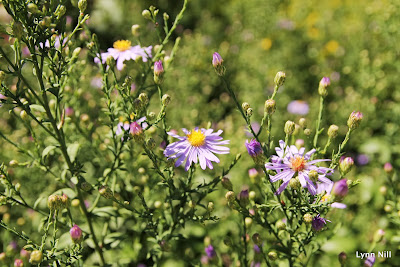 I think I'm coming to a realization about myself, when it comes to learning about the natural world: I'm a generalist. I don't love any particular part of nature more than another. True, I DO love flowers and plants, and spend a lot of time trying to make my garden beautiful, but does a flower give me more of a thrill than a bird, or even a dragonfly? Not really, its just that I can decide which flowers and plants I want to surround myself with, and have less control over which birds and dragonflies wander into my garden. 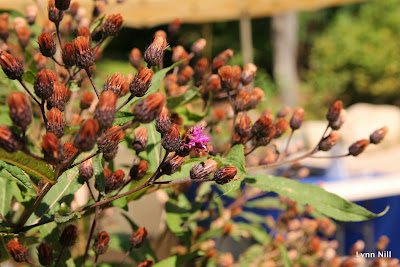 Then there are all the other wild things around us in nature; mosses and lichens, wildflowers and trees, sun and sky, clouds and stars. Every time I take a class or go on a hike I learn a little bit more about the world around me, and that knowledge helps me appreciate and notice more of what I see. 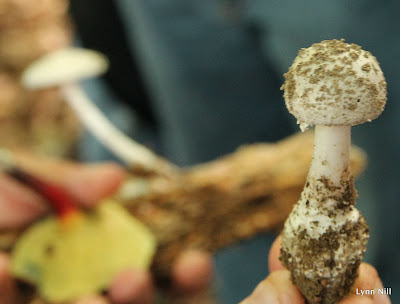 On Sunday afternoon Lee and I took a class called "Fungi in the Fall" through the New England Wildflower Society. The class was held at a very interesting place called Drumlin Farm, in Lincoln, Mass, in the western Boston suburbs. It was a beautiful cool sunny day, great for wandering through the woods, although not so great for mushroom hunting. Mushrooms like dampness, and there hadn't been any good mushroom hunting rains for the past few days.


The class started with a short lecture on the life cycle of fungi. Strangely enough, I had just completed the page on fungi in the Botany Coloring Book through which I am slowly working my way. This meant that I heard the same thing that I had just colored, so it actually seemed a little familiar to me and made some sense. I have a terrible time with all those latin terms, but I do have some understanding of mushroom form and function now. I can "see" all those mycelium sneaking through the soil, the mushrooms themselves sprouting up when the conditions are right, the spores drifting down from the laminae (the little ridges on the underside of mushrooms).

I'm fairly apprehensive at the thought of eating a wild mushroom, unless it is a morel. All the others seem like an iffy proposition to me. Lee would like to be able to identify more of the edible varieties, but I'm just in it for the interest and beauty. I'll leave the identification and consumption to the experts!

We found a lot of very interesting and beautiful looking mushrooms on our walk. Our teacher, Jeff, could identify some of them, but wouldn't state definitively what quite  a few of the fungi we found actually were. Apparently even the experts don't like to state exactly which species of mushroom they've found without taking it home and keying it carefully. I did discover that it matters how old a mushroom is as well as what kind it is. Old mushrooms aren't good to eat, even if they are an edible variety.

Drumlin Farm is a working farm with a small collection of animals and a very large garden. They have a farm stand, but we didn't buy anything since we're getting ready to go out of town. They have a lot of activities for children and there were little kids everywhere. And it was just a beautiful afternoon. Occasionally I would have to lift my gaze from the fungi to the fields and enjoy the flowers and other plants as well, staying true to my generalist tendencies. 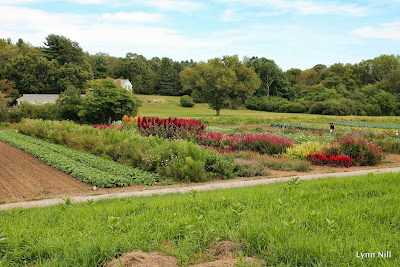 Email ThisBlogThis!Share to TwitterShare to FacebookShare to Pinterest
Labels: mushrooms 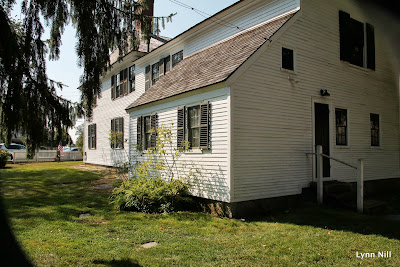 While my mom was visiting we drove up to Maine and toured a couple of historic houses and their gardens. My mom doesn't walk very well anymore, but with her walker in tow she was game to at least try to see as much of the tour as she could. And whenever she got tired her walker very conveniently turns into a seat so that she could rest. 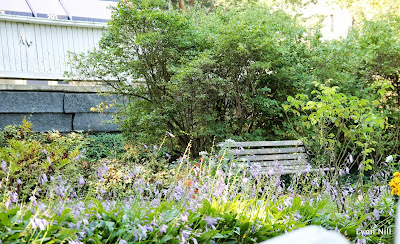 We drove up to South Berwick, Maine, on what turned out to be the hottest day of the summer. The high ended up being 95F, which is crazy in this part of the country. It slowed all the tour-goers down a bit. People just aren't used to those kinds of temperatures up here. My mom probably fared better in that respect that the rest of us. 95 is no big deal when you are from St. Louis! 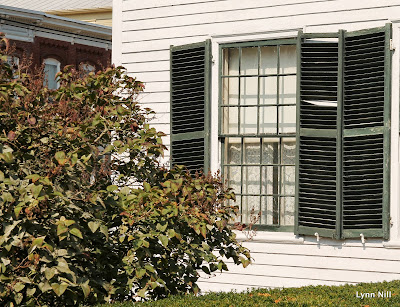 South Berwick is close to the Salmon Falls River, right over the New Hampshire border. It was originally located on the river, but was moved to higher ground when the railroad came. An interesting factoid that we found out on the tour was that when passenger trains went to Maine regularly, back in the 19th and early 20th century, it was actually easier to go to Boston for the day than it is now! No traffic congested freeways to negociate, and no worries about Boston parking! I was more than a little jealous. 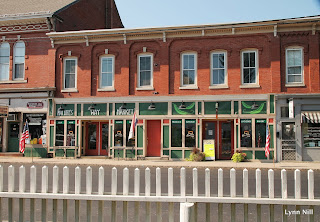 The first house we visited was right in the center of town. Sarah Orne Jewett was a very popular writer from the late 19th and early 20th century. She wrote over 100 books, essays, poems and magazine articles, but have I ever heard of her? Nope. One of the nice things about this tour was the way the guide would incorporate some of her writing into the tour itself. Sarah Orne Jewett used the features of her surroundings in many of her books, so of course that worked well, since the excepts often described what we happened to be seeing. 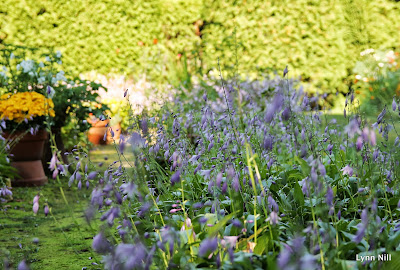 The house we saw actually belonged to her grandparents, but when they passed away it was given to Sarah and her sister and they lived there together their entire adult lives. Sarah loved the house both inside and out. The tour was sponsored by the New England Wildflower Society, so there was an emphasis on the gardens, which have been lovingly recreated by the caretakers. They have tried very hard to use flowers and plants that were used at the beginning of the previous century, so there were many heirloom plants. 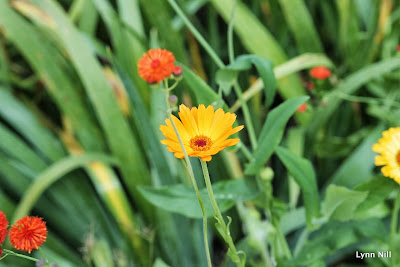 I have never really thought about the decisions that have to be made when a house or garden are historically preserved. Older houses and gardens have often gone through many different stages and the preservationist has to choose which era they want to reclaim. In the case of the Jewett house it was relatively easy to decide to reclaim the house as it was when Sarah lived there as an adult and how it was described in her books. In the case of the second house we toured, this issue was more problematic. 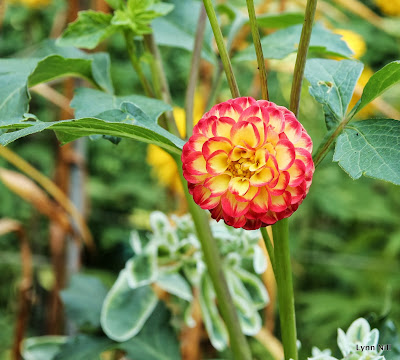 The Hamilton House is located outside of South Berwick on a magnificent piece of land along the Salmon Falls River. It really was astonishing to drive up to the house and then walk up the path leading to the garden. You rounded a curve and suddenly a wide vista of water appeared. It was jaw-droppingly beautiful, even in the hazy heat. 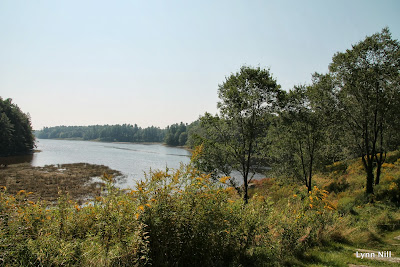 We gathered in a shady spot in the garden and heard the history of the house. It was built in the 1700's and was used by a shipbuilder and then later a sheep farmer before it was bought by two women, a mother and daughter, in the late 1800's. Emily Tyson and her daughter Elise loved flower gardens. In the era a style called Colonial Revival was very popular and the two women proceeded to make the grounds of the house the height of Colonial Revival style. Fountains, symmetrical paths, arches, vases and flowers popular in the Colonial period dominated their design. 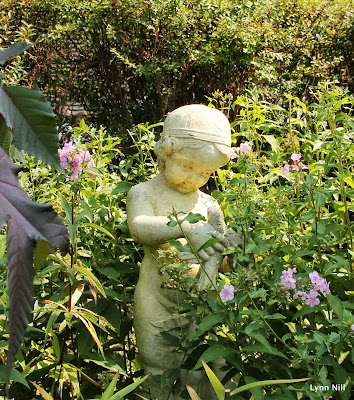 When the Hamilton house was bought by the Historic New England preservation society, they had to decide which era of the house to recreate. Should they pick the original era, when the ship builder and the sheep farmer had a barn right next to the house? Or should they try to recreate the Colonial Revival gardens of Emily and Elise? Even that was a little difficult to decide, since the mother's style and the style later chosen by the daughter were also different. 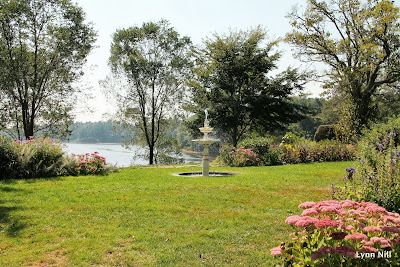 Eventually the preservationists decided to try to gradually recreate the style the daughter used. They have done a lot of the work, but there is still more to do. 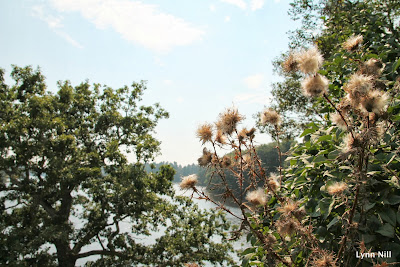 My mother and I had a great time on this tour, but by mid-afternoon we had both had enough. The heat had gotten to me, and my mother had walked more than she normally does in a day and was pretty tired. We were ready to call it quits. 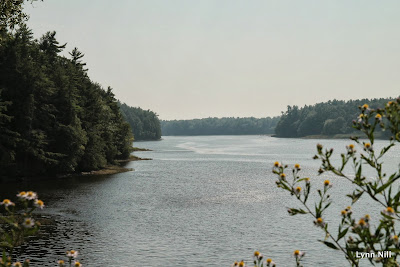 There are a lot of historic houses in New England, of course, many with beautiful gardens, and none of them very far away. I wouldn't mind doing another house tour sometime, especially if it involved a garden or two! 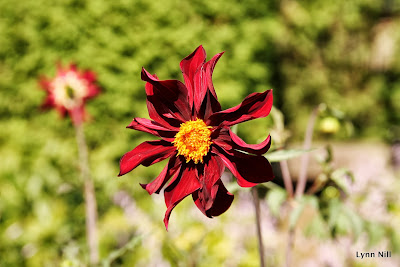 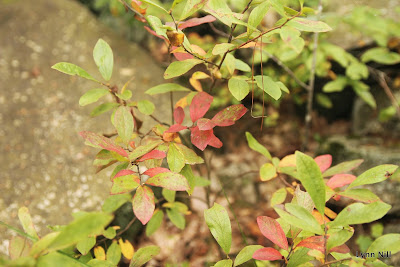 I know its still summer in New England. In fact, although it has not been very hot lately, it has been very, very humid, which is unusual here. In Missouri I hardly noticed the humidity although it is a very humid place in the summer. I guess that's because I had been around it all my life. Heat, humidity, they went hand in hand.  In Hong Kong the humidity would slam you in the face when you went outdoors at almost any time of the year. You couldn't NOT be aware of it, and in fact you ignored it at your peril.The lack of a dehumidifier in one's apartment meant musty smelling clothes and purses and shoes with mold growing on their leather surfaces. 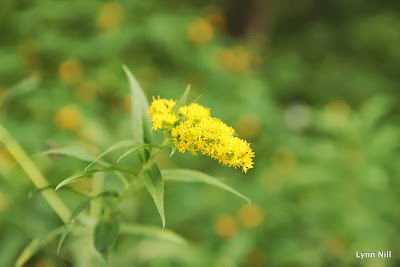 But its unusual for it to be so humid in New England. I feel like your typical mid-westerner, muttering "its not the heat, its the humidity" and wearing shorts and tank tops in 70 degree weather. 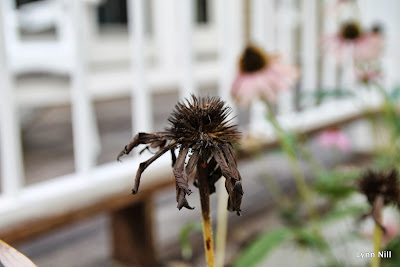 But the weatherman says cooler weather is on the way with lows dropping into the 40s later this week. The trees and other plants seems to know it. Although I wouldn't say the leaves are turning just yet, here and there a bit of yellow can be seen. 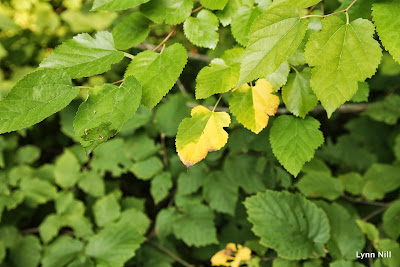 And the goldenrod! I love Goldenrod. I leave it growing wild along the edges of my flower beds, and it holds a prominent spot in the new meadow garden. 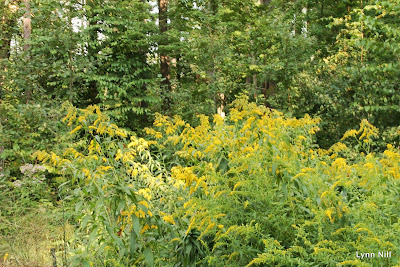 Although there are still plenty of flowers blooming, the most interesting thing to me right now are the late summer berries. I forget that they are also part of the garden show, and then they surprise me. Oh yeah! Thats right; flowers lead to fruit, to nuts, and on it goes. 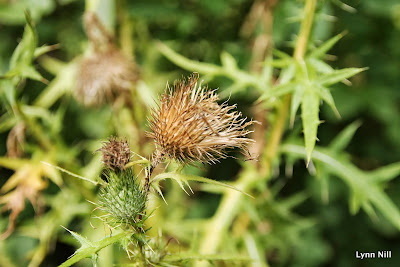 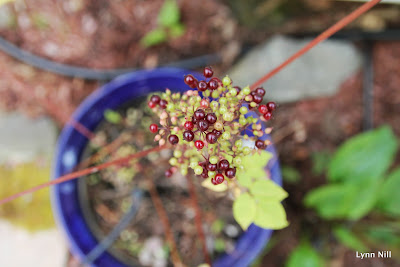 Last week my amazing mother in law was visiting, and while she was here we spent a day in Portland, Maine. One store had these great sculptures made out of metal scraps. They had such personality! I think I need one to place somewhere along the path I intend to create in the meadow garden, don't you? 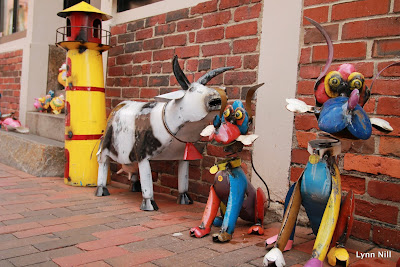 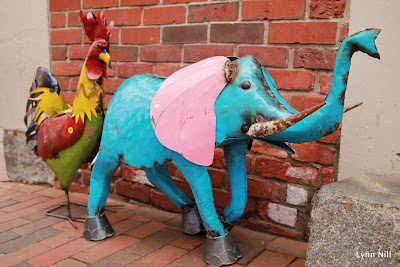 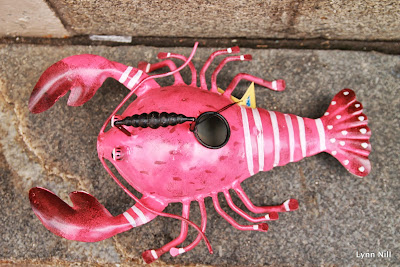 We also took her sailing. We spent a night in Marblehead, and this time the weather cooperated and we were able to go back to the park overlooking the water. Harper and Cosmo were very cooperative, and let me take pictures of them with Marblehead Harbor in the background. What good dogs! 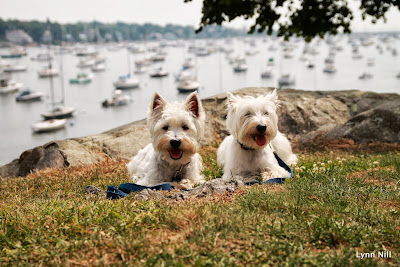