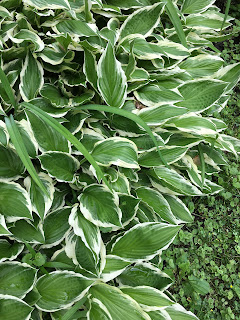 As most of you know, we are building a house. Well, we WILL be building a house, once all the preliminary activities are out of the way, and we've gotten over the sticker shock of building in this area of Minnesota.

We built a house once before, but it was a long time ago, out in country, in Missouri. We really had no idea what we were doing and made mistakes that in retrospect should have been obvious. So this time we're doing a lot of planning ahead. We're getting bids and pricing things in advance; we're encouraging our contractor to find savings wherever possible.

One thing we didn't plan for, however, is Shorewood, MN. Apparently Shorewood is somewhat notorious for being a difficult place to build. They have lots and lots and lots of rules. One rule that caught us unaware was the fact that we had purchased a "substandard" lot. The lot is 1/2 acre and apparently lots in this area are supposed to be an acre. Did the realtor say anything when we purchased it? No. Did the city planner say anything the first (or second or third) time Lee contacted them? No. So, we found out we needed a variance, and with a little hollering managed to get ourselves on the Planning Board and City Council schedules at the beginning of June. It was no problem getting the variance, thank goodness, so its on to the next hurdle.

There is an old farmhouse on this property that must be torn down. Around the farmhouse are many many many overgrown plantings of flowers. I weedled some large black plastic pots from a nearby garden center and have been digging things up to try to save at least a few plants before the demolition begins. There's no way I can save it all, or even a tenth of it, but there is so much and it all needs to be divided anyway. I'm going to get a lot of plants out of my 20 buckets.

So far I have dug up hostas, day lilies, iris, peonies, vinca, salvia, and other plants that I'm not sure what they are. Every time I go there more things have popped up and bloomed, so I dig them up too.

There are lilac and spiria bushes that won't survive the construction so a neighbor with a backhoe is going to come by and dig them up. He'll keep some of them and give me back a few. These bushes are really old so they may not make it, but its worth a shot. 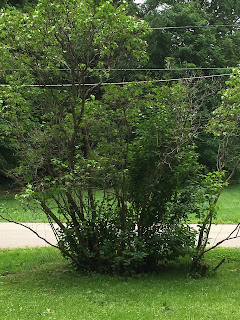 There are a also a lot of trees on the property, and some of them must come down. They are either old and diseased or they are right where the new house is going to go. Another Shorewood rule - any tree of a certain type and size must be replaced, so we have to put in 5 new trees. That's okay, or it WOULD be okay, but Shorewood also says that the replacement trees must be either deciduous trees with a 3" diameter trunk, or conifers that are 6' tall. Have you priced a deciduous tree with a 3" trunk lately???? Suffice it to say we are buying 5 conifers and placing them along our new driveway, and along Eureka road. Sheesh! 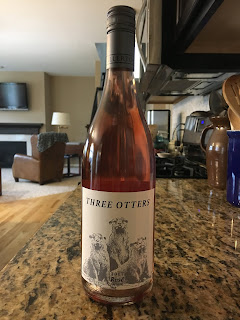 Several weeks ago Sarah and I went to a Rosè wine tasting in St Paul. A local wine shop puts it on. There were many many distributors with many many different rosès to try, over a hundred in all. We had to pace ourselves!

It was pretty chilly that day. This is something I’m still getting used, the wide fluctuations in temperature that are common in the Midwest. We’ll have several days with highs in the 80’s, then it drops back into the 50’s and 60’s. Next week will see some highs in the 90’s. It’s confusing!

I drove over to Sarah and Erik’s a little early; we thought we might go to an art show first, but Mr Leo had other ideas. We had to wait for him to wake up from a long nap so he could eat before we left.

Once that was accomplished off we went. The event was held in the parking lot of  St Paul’s College, under a big tent. We were given a book with the names of the wines. Each wine was assigned a number, and the distributers and their wines were in order by number around the tent so it was easy to find the wines we wanted to try.

Rosè is not a varietal as I learned, so you can have lots of different kinds of Rosè; Malbec, Zinfandel, Pinot, you get the picture. It is considered a TYPE of wine, like white, or red. It incorporates a little of the grape skins, but not enough to be called a red wine. We tried wines from different regions, different countries. We both had our own rating systems. Sarah’s was more standardized with multiple stars for wines she really liked. Mine was more eclectic with comments like “smoky!” Or “mmmmmm”.

After trying about 10 wines we took a break, getting some sausage, cheese and crackers to eat. We sat at a table outside the tent and ate our snacks. Then we tried a few more wines. It was more crowded as it got later, and after a while they all started to taste the same, so it was time to go.

We drove over to the wine shop and bought some of our favorites, using the $10 off coupons we received at the tasting. Then we drove back to Sarah and Erik’s house, to play with Leo a bit and eat homemade pizza. Not a bad way to spend a Saturday, and now I have a bunch of Rosè wines to drink this summer too. 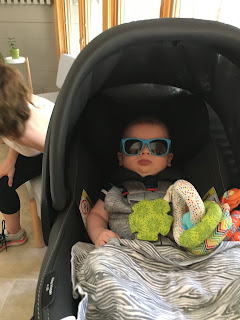