New York City Part I. apartment in the Village and the 9/11 Memorial

We drove into New York from new Hampshire on December 4th. The drive went very smoothly until the Cross Bronx Expressway when an accident on the Hudson River Parkway slowed traffic to a crawl. Lee employed his best Hong Kong driver techniques, but all the drivers around us were using their New York City mojo, so it wan't as effective as it sometimes is. HK driving means if the nose of my car is ahead of the nose of your car I win, but New York City drivers don't admit defeat that easily. Finally the traffic eased and we made it the rest of the way into Greenwich Village.

We found a parking spot right in front of the apartment, at least for the night. Streets in this area of New York have a complicated system, that involves having to move your car for a couple of hours on certain mornings. We would have to move our car in the morning, but we would worry about that later. First it was time to see where we would be living for the next week.

First surprise, an apartment on the 4th floor, and no elevator! Hey, we're in good shape, but it sure makes you think carefully before you head out for the day. Next surprise, this is a VERY small apartment, and the decor is mid-century modern, i.e. sixties orange and avocado green. But it's clean and very quiet, and right in the middle of the Village, close to the Hudson River, Washington Square, and tons of restaurants.

We take Harper on a short walk over to the dog park in Washington Square. She is happy to be free and delighted to find a few other dogs to play with. But we're hungry so this is a short visit.

We decide to go to Momofuku for dinner. It doesn't require a reservation
And I know Lee will love the food. We sit at the bar and watch a very talented sous chef whip up various dishes. She makes a grilled octopus look simply heavenly, but we have already decided on brisket buns, spicy rice cakes (not your mama's rice cakes, let me tell you), and a miso ramen noodle bowl. We'd like to eat more, but there is simply no room.

We return to the apartment and take Harper for a long walk along the Hudson. She is very happy to see green grass. Although she loves seeing so many dogs and people when we are in the city, she is really a country dog at heart.

Monday was sunny and mild, unseasonably warm for New York in December. I had tickets to visit the 9/11 memorial at 2 pm. The site just opened to the public for the first time on the 10th anniversary of the attacks. Up until now I had no desire to visit ground zero. I consider it a gravesite, and it didn't seem right to go just to gawk at a giant hole in the ground. But I read about the design for the memorial in The New Yorker. It sounded very moving and beautiful. They limit the number of people allowed on the site at a time by issuing tickets.

It was an easy subway ride down to the site of the memorial. Once down there it was very crowded. Everyone was standing around, trying to figure out how to get tickets, how to enter the site, taking pictures of the World Trade Center buildings rising against the brilliant blue sky and puffy white clouds. 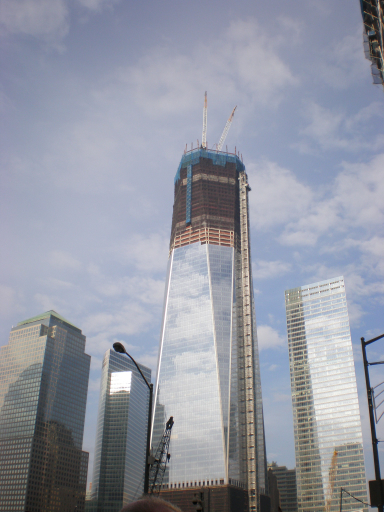 As former Hong Kongers used to massive crowds, we had no trouble winding our way to the entrance at the appointed time. The security to enter the site is elaborate. We must have gone through at least 5 checkpoints where they scanned our tickets and a security scanning as well. Once inside the memorial a sense of peace and sorrow fills the air, along with the sound of falling water and construction. There are two pools, one in the footprint of each tower. The pools contain a series of two waterfalls, one along the edge of each pool, and a smaller one in the center of each pool. It gives the appearance of an infinite disappearance of water. 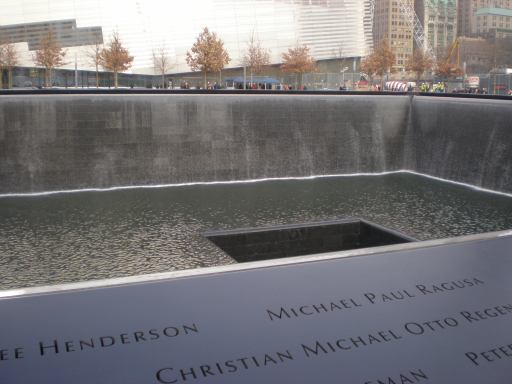 Around the edge of each pool are the names of everyone that died on 9/11 at the World Trade Center, the Pentagon, and in Pennsylvania. It's a very sad experience but it's also healing. I kept thinking about that day over 10 years ago, but also about our visit to New York in the spring of 2001. We had gone to see the statue of liberty, and had walked from Battery Park to Wall Street, and then to the World Trade Center. We went up to the top and gazed at the view, then back down and continued walking north to somewhere in Soho where we met a friend for dinner. 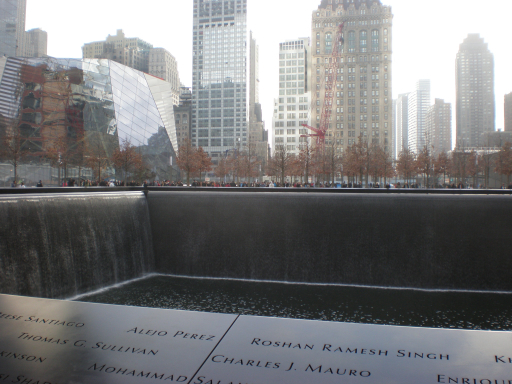 When I first heard that they were planning on building a giant skyscraper at ground zero I was appalled. I couldn't imagine that anyone would want to live or work in a tall building right where the airplanes hit their target. But seeing that building rising against the sky I had a different, almost defiant feeling. Ha, I thought, watch us, we just can't be kept down for long. When that building is complete I'll be happy to go to the top to see the view. Yes I will. 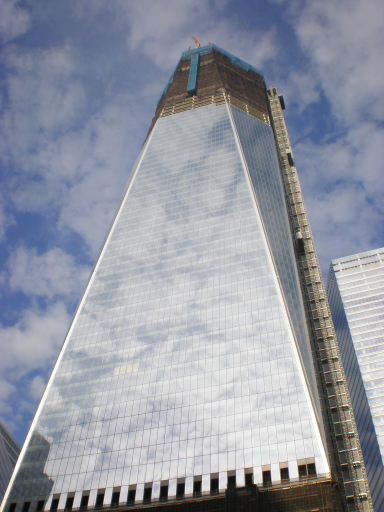