Mizzou in the City

On Tuesday Lee went to New Jersey to work and Harper and I stayed by ourselves in the city. The predicted rain had moved in so Harpr was not crazy about going for walks, but I put on her raincoat and told her not to be such a baby. That evening Lee and I went to Madison Square Garden to see Missouri play Villanova in the Jimmy V Classic. It was just so strange that Mizzou happened to be in New York City right when we were there.

I've never been to the Garden. To tell the truth we weren't really sure where it was. But it was very easy to find (as it should be, it's huge). Right next to Penn Station, an easy subway ride away. We found our seats and before too long the game began.

Mizzou has a new coach, since Mike Anderson left for Arkansas. Frank Haith, the former Miami coach, is a big surprise. Many fans were not very excited about the choice that was made when picking our next coach. Miami was a terrible basketball team when Haith became their coach, but he took them from terrible to decent in the 5 or 6 years that he was there. But no final fours or elite eights are in Mr. Haith's resume, so Tiger fans were disappointed and suspicious. But so far this team has really been great. They are undefeated and ranked, and defeated Villanova handily.

Villanova is in Philadelphia, so they had quite a lot of fans there. But Missouri was surprisingly well-represented. I found myself wondering how many of the people surrounding us were former journalism majors.

It was fun cheering for Mizzou, yelling M I Z -Z O U and watching them win. But I missed the band and the full arena screaming for the Tigers. It would be great to go see them play in Columbia again some day. 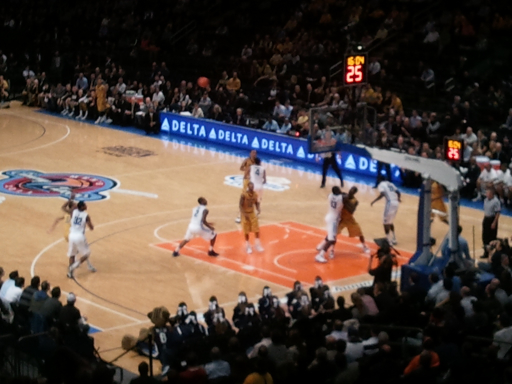