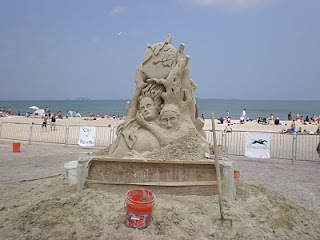 While Sherry, my intrepid traveling friend, was house-sitting in Boston, we got together a couple of times to “research” New Hampshire beaches, eat lobster rolls and appreciate different aspects of a New England summer. One day we went to Revere Beach in Massachusetts, where a sand sculpture contest was taking place. 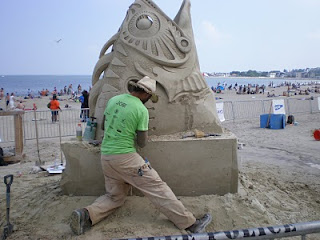 I’ve never seen sand sculptures before but I’ve heard about them and I was curious. How did they keep them from falling apart or washing away in the rain? How did they get them to be the correct consistency so that the sand could be sculpted? We went at a point in the contest where the sculptures were still in progress so that we could watch the artists at work. They looked like they were working clay, and excepts for the various sizes of shovels, their tools looked somewhat like a potter’s tools. 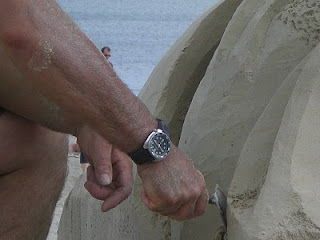 It was fun to watch the artists in action, but I didn’t quite know what to think of the sculptures themselves. They had a bit of a “new-agey” feel to them which made them seem pretty kitschy. Some of them were massive too. 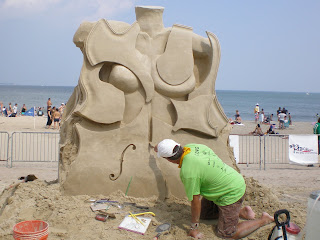 My favorite things about this expedition didn’t have much to do with the sculptures themselves. I was delighted to be able to take the ”T” to the beach. I wish we could do that in New Hampshire! They had wheelchair with big tires so that people with disabilities could enjoy the beach. What a great idea! Again I wish they had those on a New Hampshire beach so that my mom could get closer to the ocean. And Sherry and I stopped to get some ice cream – a perfect culmination to our little adventure. 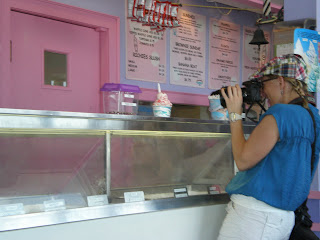 Earlier this month Lee and I took a short two night vacation up the coast to Maine. We stayed in a B&B called Victorian-by-the-Sea, right outside of Camden, Maine. This area is known as mid-coast Maine. Maine has a lot of coastline! New Hampshire only has 18 miles of beaches, but if you look at a map it appears that Maine’s coastline just goes on forever. 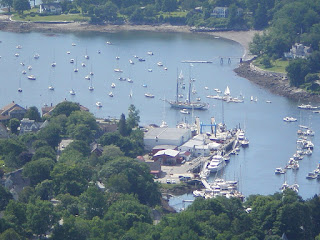 We took Harper with us and she did very well. It was a little bit like having a toddler along, except that we could leave Harper in her crate in our room when we went out to dinner. I guess we couldn’t do that with a three year old! 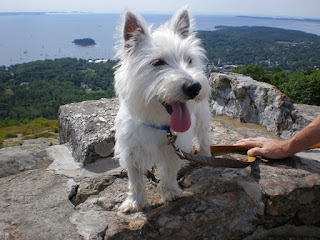 Maine is beautiful, of course. Lee had never been there before and he started fantasizing about retiring up there (there is a lot of property for sale). I fell in love with it once again, and started getting excited about going to Corry and Jeff’s island next year. We wandered around Camden, explored the rocky coastline, went to woodworking and weaving shops, and hiked around Mount Batte. 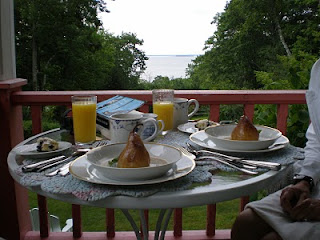 My mom is into the second week of her visit with us. We have done some activities, but we’ve also just enjoyed our time together, hanging around the house, playing with the dog. A couple of days ago, however, we went on a luncheon expedition. While Lee and I were at the B&;B, one of the other guests told me about a darling cottage out in the countryside in New Hampshire called Pickity Place. It sounded like something my mother would enjoy, so off we went. At first we drove through the typical small towns of New Hampshire, some pretty, quant and historic, and others given over to strip malls and gas stations. But then we turned on to a country road. The road wound itself up a small mountain. Eventually the road turned to gravel and from gravel to dirt. The terrain became rougher and wilder and no other people were in sight. My mom started to get nervous. I was okay, after all the GPS seemed to know where we were going, but I had no idea this place was going to be so remote. Finally we pulled into their driveway and there we were! 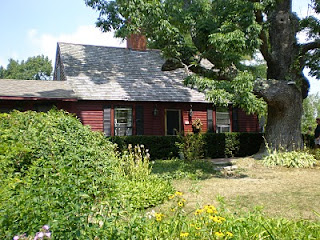 This was the cutest little place and the food was wonderful! There was a gift shop and an herb garden to explore. The restaurant cottage was very old and had been used at the model for the illustrations for the Little Golden Book’s version of Little Red Riding Hood. I thought things looked a little familiar! 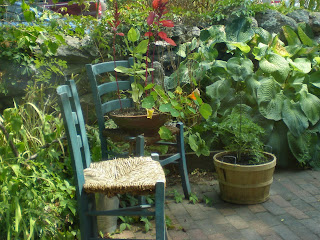 This New England summer just won’t quit! I’m waiting for my canning supplies to arrive. I’ve purchased a Botany Coloring book to help me learn the names and parts of plants. We have sailing trips, garden parties and weekends in Boston still to enjoy. And, yes, I’m starting to look at garden catalogs, planning what bulbs and daylilies I want to plant this fall. But let’s not talk about fall, not yet! 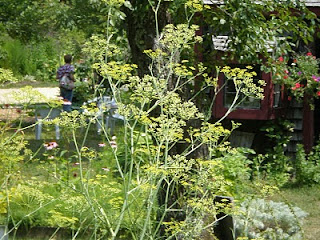