One of the activities of the International Women’s Club of Boston this summer was a trip to the small coastal village of Annisquam, Massachusetts. One of the members kindly opened her house to us. She had an art show at the local gallery, so the plan was to meet at her house, visit the art gallery, beach and “downtown” Annisquam, and just have a nice day in the country.

Annisquam is a teeny tiny village on Cape Ann, a coastal area of Massachusetts north of Boston. The most famous town in this area is Gloucester, a former fishing village and now vacation spot and residential community. People live here year round as well as having summer houses on the coast and in the small towns that dot the bays, harbors and islets of this area.

It seems funny to me to describe this as a rural area, although it most assuredly is rural, since I had to drive quite a ways TOWARD Boston to get there. But when I got to Highway 128, the old ring road around Boston, I turned toward the ocean. And although I assumed it was much closer to Boston than we are, it turns out that its actually thirty miles northeast of the city, so its just as far away as we are. Because up in New Hampshire we’re only forty minutes to the ocean its hard to realize that the shore north of Boston juts way out to the east, making everything in that area farther away. The one other time I was near here it took forever to get here, and now I understand why.

My GPS got me to Mary’s doorstep without incident. Her little cottage is her summer house. The house appears tiny from the road but it actually consists of three levels, since its built on the side of a hill. The main living area is down one level and opens out to her back yard and a screened porch. Her studio is on the second level and there were a multitude of bedrooms on the third. The house used to be a boarding house and was over one hundred years old. 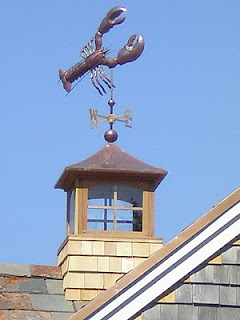 Wikipedia says that Annisquam was first settled in 1631. It is across Cape Ann from downtown Gloucester and has always been primarily an artist colony and vacation spot.

After eating lunch at Mary’s we strolled down to her art gallery. It was fun to see her beautiful paintings and listen to her talk about her art and the differences between painting with watercolors and painting with oil, which is what she now primarily does. I kept thinking about Eugenie and the changes that her art has gone through. Mary is primarily a representational artist, although she had a few pictures in a more abstract style with which she was experimenting. 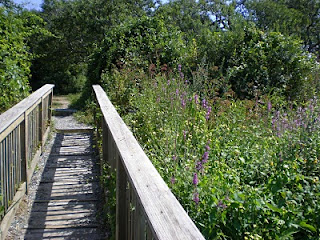 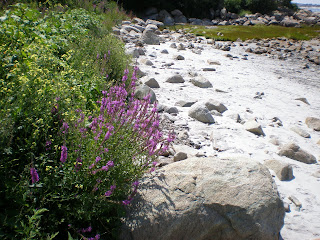 After the art gallery we were free to do whatever we wanted for the rest of the afternoon. A few of us chose to explore the beach. The Annisquam beach was just beautiful! To get there we walked along a path through a meadow. Wildflowers bloomed profusely in the meadow and all the way up to the rocks before the beach. It was low tide and the expanse of beach was huge. But the jewel in the crown so to speak was a perfectly picturesque light house, situated directly to the right. 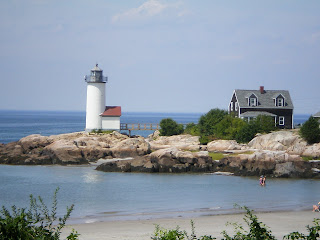 After strolling along the water and getting our toes wet, I laid down on the beach with a couple of the other ladies.   The wind and sun were warm and comfortable but I was restless. I decided to walk down to the marina and see the rest of the town. 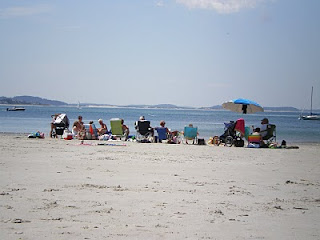 The little harbor was filled with sailboats and small fishing vessels. Children played on a bridge across the harbor, but it was mostly quiet and peaceful. Flowers nodded in the afternoon sunshine. I peeked into the marina restaurant, but it was closed. Getting sleepy and wanting to avoid rush hour traffic, I strolled back to Mary’s, thanked her for the wonderful afternoon, and headed home. 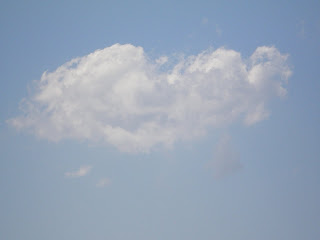