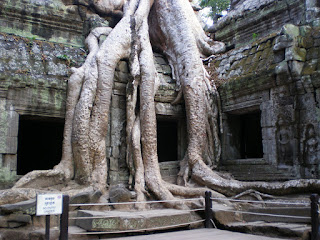 Tuesday afternoon we head back to the temples. This time we go to Ta Phrom. This is the temple complex of which you are most likely to have seen pictures, besides Angkor Wat. This is the one where they've left the banyan tree roots intertwining with the ruins. It makes for great (and famous) pictures. You can see the power of the jungle. It doesn’t take long for the jungle to claim its territory. Its really interesting to contemplate that ALL of the temples looked this way before they were restored. 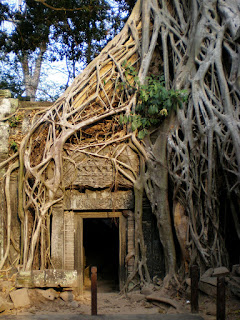 It seems that the tuktuk drivers have adopted us. They all wave enthusiastically and vie for our services, even though we no longer pay $2 a ride. Maybe they hope we’ll return to our prolifigate ways and they’ll be the lucky recipient.

I've thrown my "never give money to beggars" attitude out the window in this country. Children selling wooden flutes in the ruins? No flute but a dollar for a picture. 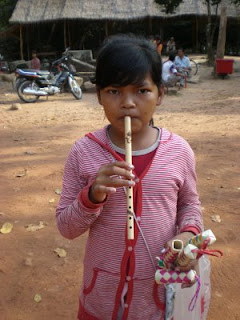 Victims of landmines? Sure one dollar. Two little girls posing in a temple door sing folk songs - pictures and a dollar apiece. I just want these people to have a fighting chance to move beyond their terrible history to peace and prosperity. T 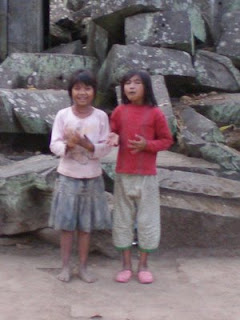 he beggars here are just trying to make a living, and they’re pretty creative about it too. That’s what’s so great, however, about The Ponheary Ly Foundation. By making it possible for these little kids to get an education they will break the cycle of frustration and anger between the poor and educated classes that caused the killing fields.