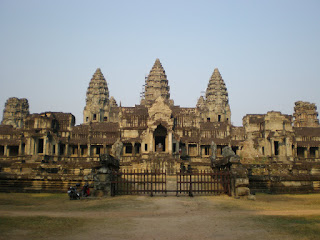 It’s a one hour plane flight from Bangkok to Siem Reap. Gazing down at Thailand and then Cambodia it all looks very rural. We land in Siem Reap at their small international airport. We are in a different world. Cambodia…the thought of this country brings images to my mind from 1968 and the illegal war, to 1975 and the killing fields of Pol Pot. My friends in Hong Kong that have been to this country either gush or yawn about Angkor Wat and the other temple complexes in the surrounding area. They either spend a week going from temple to temple in increasing states of awe and stupefaction, or spend a day at the must-see temples and then retire to the comforts of their five star hotels.


Our guide, recommended by our friends Gail and Phil Jones, met us at the airport. Dara and our driver take us to the Angkor Holiday, a pleasant hotel centrally located in Siem Reap. It’s not fancy but it’s quiet and clean, with an aura of days gone by. We wander down to the pool to have a cocktail (Singapore Sling for me, a beer for Lee) and then we follow Cyndi’s instructions and wander down to the river to eat dinner at the FCC. Up on the balcony overlooking the river, we order the Khmer Platter for our first taste of Cambodian food. It seems to be a mixture of Thai and Vietnamese cuisine, with some of its own subtle flavors.


The next morning we were up early, too early. My phone usually resets itself to the local time automatically, but here even the satellite signals are primitive, so it wakes us up an hour too early. It’s just as well, since we have to get up early the next day anyway. We opt for breakfast by the pool. Hey Gail, we thought it was just fine! There are a variety of breads, eggs, and fruit. Lee is happy with a bowl of noodles. But he is more Asian than me (or more Danielesque perhaps). And when someone tells me the breakfast at an Asian hotel isn’t great I have visions or having only salads and fried rice to eat, so I’m happy. Once breakfast is over we meet Dara in the lobby and it’s off to Angkor Wat.

Angkor Wat is big. It’s so big it’s hard to get my mind around it. We come in from the back, the east gate, there are fewer tourists and it’s quieter. There’s a big gatehouse, a huge stone fence, a moat that looks like a river. Angkor Wat rises in layers inside the moat. Dara takes us inside gradually. As we walk from the outer edges toward the center we begin to look more closely at the intricate stone carvings on each wall. There is a story being told, a “movie” as Dara so aptly puts it. Battles are being fought, one side against another, gods and demons, Buddhists and Hindus. 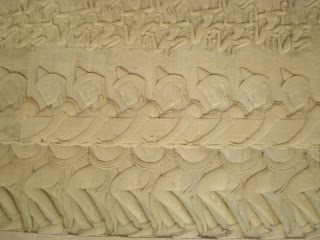 People are selling fruits and vegetables, cooking pigs in caldrons, giving birth, dying in battle. It’s amazing in its detail and level of preservation, especially considering that most of it is over 1,000 years old and has never been that well protected from the elements, invading armies, or the fingers of curious tourists.


Angkor Wat is in a continual state of restoration. Projects are begun, then abandoned as war or changes in government intervene. Angkor Wat is a microcosm of the upheaval this country has undergone in the last 40 years. 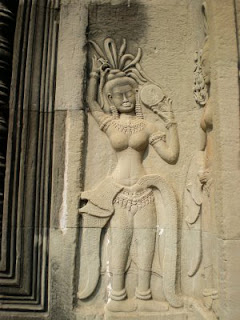 After Angkor Wat we drive back to town. On the way we stop at an artisan school. We know this routine – tour the school and buy something to support it, that’s okay. The school teaches students to make replicas of temple art so that they can support themselves – stone carvings, wood carvings, silk painting, and lacquer ware. We purchase a replica of one of the Angkor Wat stone wall carvings and we’re happy. 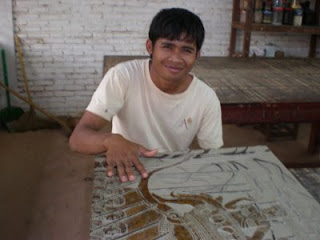 Now it’s back to town for a break. We take a Tuktuk to Pub Street and opt for lunch at Amok, where we (of course) sample the Amok and some curry. Little kids accost us – buy book? Buy postcards? No we say. Okay, then can we have your leftovers? We agree to the last one, but the kids are breaking a rule (which we didn’t know) so they grab the food and run before they get yelled at by the police.

In the afternoon Dara takes us to Angkor Thom, a temple complex of over 60 temples. This is overwhelming in a different way. The bridge to the entrance to the temple complex is guarded by a row of gods. We wander the grounds from one temple to another and soon they all begin to blur together in my mind. We climb to the top of one temple to gaze at the other temples in the distance. It’s hot and beautiful and tiring. We are not afternoon people, but we gamely trudge on. 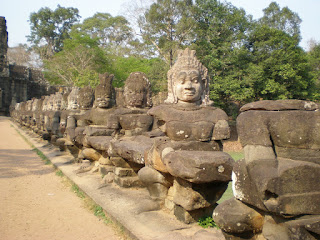 We begin to hear a little of Dara’s story, which is tragic enough to make me want to cry. His father was a teacher, killed by the Khmer Rouge. His mother kept the rest of the family alive – he is the only boy, with 5 sisters. He was born in 1970, so he was 5 years old when Pol Pot took over Cambodia. He had no formal education until he was 12 years old. His father would meet him in the forest to teach him to read and write when he was little, but it was dangerous so they didn’t do it very often. After his father’s death, his mother kept her family alive by selling food by the side of the road. She was afraid to send them to school so he only began his formal education because he wandered into a schoolhouse when he was 12 out of curiosity and a longing for something more.


His sisters have all specialized in a different language for tourism – his specialty is English, the others tour in French, Thai, Japanese, even Russian. Their latest effort is a guest house to keep all the members of his extended family together, and a Foundation that helps educate students in rural areas. The foundation is called The Ponheary Ly Foundation. It was started by a woman from Austin, Lori Carlson. Their website is http://www.theplf.org/. They are an amazing family and Lori is an amazing person. More on that later!

That evening we went back to Pub Street and had dinner at the Red Piano. Great name, but the food was just okay…I had a salad, and a beer, and samosas masquerading as Thai spring rolls.


One thing the guidebooks tell you and it helps to keep me from getting irritated. Remember what this country has been through and what happened to all the educated people during Pol Pot’s reign. In a country of 7 million, 2 million were murdered between 1975 and 1979, many of them the educated people. So if things aren’t done quite right, be patient. It helps me to take a deep breath and think, oh well!


The next morning up got up early again to see the sunrise, only there was no sunrise because it had rained last night and the sky was cloudy. We didn’t really mind though. Even with all our fellow tourists milling about it was still beautiful, watching Angkor Wat appear slowly in the darkness. 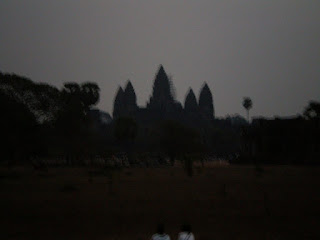 After sunrise we tour a pink temple, and then go to a village to see a demonstration of palm sugar being made. We buy 3 tubes of the sugar (basically tastes like brown sugar candy) for a dollar. We drive slowly through other villages, see monks begging for rice, spirit houses that look like fishing shacks…as we re-enter Siem Reap Dara mentions that his house is nearby. Would we like to see his house? Yes, yes! Dara’s guest house teems with children and relatives. A Cambodian soap opera plays on the TV. Women cook in the outdoor kitchen. An old man squats on the front porch. He is a man from the rural area where we were during the war, Dara explains. He helped my father and now….you give back to him, I interrupted. Dara blushes a little. Yes.

Lee asks where Lori is, because Dara has mentioned that she is in the process of moving to Cambodia and arrived at the airport right after we did a couple of days ago. She is here Dara says. Would we like to meet her? Yes! Lori is from Austin Texas. She has sold her stuff and plans to stay in Cambodia and help the foundation grow. She is adventurous, committed, young, enthusiastic, realistic, and smart. Its fun to talk to her and we also think that she and Sherry should meet somehow…
Posted by Lynn Nill at 6:42 PM