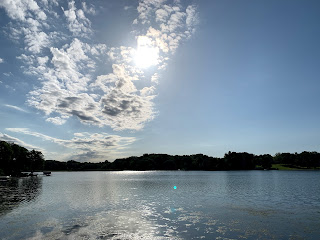 I have a lot of thoughts swirling around lately. Its really hard to focus with so many awful things happening at the same time. I’ve thought off and on, of writing something about the murder of Goerge Floyd and the subsequent riots, but it really seems kind of insensitive to assume that my thoughts on the subject matter that much, sitting here in my safe little suburban cocoon. The fact that it happened in Minny is important to me, however. This is my adopted home, and probably will be where I am for the rest of my days. So what happens here reflects on me, and I’ve got to feel ashamed, even though Minneapolis is not “home” to me yet, not in the way that other places that I’ve lived eventually became.

If it wasn’t for Covid, and my age, and our expanded bubble, I would go demonstrate, and support the marches. I’m heartened by the wide swath of outrage I’m seeing online, from people on every side of the political spectrum. There was something about the awfulness of this crime, in full view, recorded for all to see, that made almost everyone say this is wrong and cannot stand. Of course once the protests started and the riots, plenty of people were like wait, this is not ok either. I don’t condone the violence, but I understand it.

Leo is beginning potty training. He came over yesterday, and he’s definitely got the idea for pee, and will go running to find the toilet when he has to go. He has his own little potty chair and we put it close to wherever he is so he doesn’t have far to travel when its time. He’s wearing shorts, but no underwear yet, and he’s still wearing a diaper at nap and at bedtime.

Going poop in the toilet is a much more difficult skill to acquire. He’s got the idea but doesn’t have the patience yet to sit on the potty chair until the poop actually occurs. It will come.

Yesterday was really really warm. We took the little dog wading pool out on the patio and played in it for a large part of the morning. Leo loved it, even though he had to share it with Cosmo sometimes, and Cosmo got grass in it. He and Cos “took turns,” haha. “My turn Cosmo!” says Leo!

Sarah came over with Kirby for the afternoon. We had lunch, Leo went down for a nap. Kirby is a little over 2 months old. He is smiling and cooing to beat the band. He still has only given me fleeting smiles; he mostly stares at me with a look bordering on concern. He’s bonding with Lee very well. Lee and little babies are a good match. 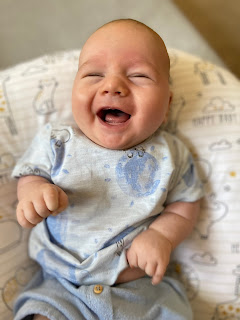 After nap we played in the pool again. Leo had an ice cream cone while standing in the water. He did really well with that cone, considering that he is only a little over 2 yo! Almost all of the cone went into Leo and only a little ended up in the pool. He was very interested in the drips coming out of the bottom of the cone. He wants to understand how EVERYTHING works, including drippy ice cream cones!

We had phase 2 of our landscaping done this week. Its pretty wonderful, lots of plants, attractively arranged. Its really nice now, give it a few years and its going to be spectacular!

I’ve made sourdough raisin bread and bagels this week. I want to make raisin bagels too, but couldn’t get my enthusiasm up for starting them today. Maybe tomorrow.

Things are opening back up a bit in Minnesota, but I’m not feeling it. I’m not ready to be out in the world more yet. There’s still plenty of cases and the danger is still there. I did go take a bunch of stuff to Goodwill this morning. It just recently opened and there were a LOT of people waiting in line. I didn’t have anything else I needed to be doing so I waited. They had good procedures in place. Everyone wore masks, all the workers, everyone in their cars. They let one car into the donation area at a time. We unloaded our own stuff and put it on a table. Got back in my car and drove off. In-between cars they blocked the donation area with a cone so the workers could go and put the donated stuff from the previous car in the correct bin. That was it.

We’ve had some very hot days this week. I got up really early to run and didn’t push the pace too hard. It wasn’t that bad. When Leo came over on Monday we played in the wading pool again. This time I put on my swim suit and actually got in the pool so I could stay cool. Leo was very busy pouring water so couldn’t be bothered to actually get in the pool. He used the watering can and the sand toys and had a fine time. 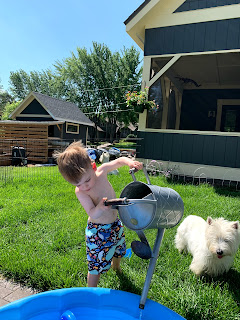 He’s got peeing in the potty down. Pooping is coming along. He poops in the potty but it seems to frighten him. He does it but cries. The poops aren’t hard so we don’t think its painful its just frightening somehow. He’ll never remember this time so we will probably never know what’s going on. He poops in the potty, he cries, eventually he’s distracted and then he’s fine. Strange!

He helped me make bagels, and made his very own bagel, which he ate yesterday afternoon. He was eating bagel dough raw, which I thought was kind of disgusting. He’s starting to ask “WHY?” and sometimes I’m a little nonplussed to come up with a good reason. “don’t eat the raw dough Leo.” “WHY?” “I don’t know, its yucky.” “Why??” Beats me!

He’s really been having a hard time sleeping at our house. He is tired, we read a book, he’s happy to go up and get in the packnplay. But then he just hangs out and plays. Then he sleeps in the car on the way home. It wouldn’t be that big a deal except if he doesn’t nap he’s a big crab at dinnertime so it sucks for Sarah and Erik.

Indulge me for a minute while I feel sorry for myself.  I knew, long before it actually happened that sf would be cancelled. So I was reconciled to it when it was finally announced. At first I was like, it ok, it’s fine, I’ll run a virtual marathon. It will be a different kind of challenge. I even planned out a course.

My training isn’t going very well. I’m struggling to make the time goals I’ve set for myself. I’ve had to adjust them once and may adjust them again pretty soon. I’m tired and sore a lot of the time. If this was a normal training session I would have that goal race at the end to keep me in check and help me focus, but without it I’m all over the place.

So why don’t I just quit training and just relax? Go back to easy maintenance running and chill out until it’s safe to race again? Part of it is I’m actually kind of afraid to stop. Some day I’ll have to stop running, and when that day comes I hope I can do it gracefully, but I’m not there yet. 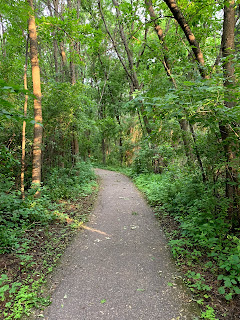