Sailing in the Storm with Gail and Phil - Part 2 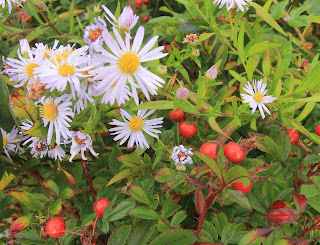 The conclusion of our aborted sailing trip back in September:

We drove up the coast, first to Rye for lobster rolls and haddock sandwiches at the Beach Plum. Then through Wentworth by the Sea, Castle Rock, and Portsmouth. We hopped on the interstate a bit, long enough to get to York. We went to the Nubble Lighthouse and admired the huge waves safely from the shore. We drove up to Ogunquit and walked the Marginal Way. On our way back we stopped at Stonewall Kitchens for jams and free samples. It was a very nice day, even if we weren’t on a boat. 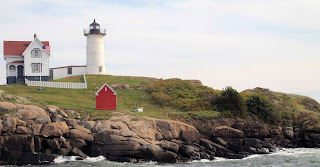 Our friends went to Cambridge for the day while we tried to figure out a plan for at least a few days of sailing. First we thought we'd go to Rockport and then on up to Newburyport and get the boat out of the water. But they can't haul it until after October 15th and there's no place to leave it there until then. So now we think we will go down and spend the night on the boat Saturday and then get up early and go to Plymouth. This has been a very frustrating experience, but there's nothing we can do. We’ve invited people to go boating with us many times and this is the first time our plans have been thwarted so thoroughly. SIGH! 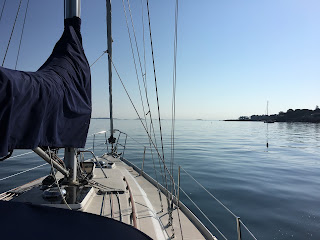 Finally! Saturday is beautiful, warm and sunny. The seas in Mass Bay are still rough, but we go ahead and get ourselves packed and back down to the boat Saturday afternoon. We settle in, eat dinner, relax. It's actually warm and we have to put up the sunshade. There is a bank of fog way off outside the islands, hopefully it will stay far out to sea. Tomorrow with any luck we'll make our way to Plymouth. We have a slip at the Brewer Marina there. Time for our luck to turn!

It's Phil's birthday, and we have bought cake at the store, slices of raspberry, chocolate, and carrot. We have candles too, so we sing happy birthday, and eat cake on the boat, lots of cake! 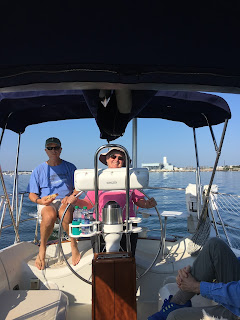 The fog lifted and finally we were able to show our friends a nice day on the waters of New England. The last vestiges of Jose had drifted out into the Atlantic and the seas had moderated. Out in the middle of Mass Bay there were 2-3 foot swells, somewhat disorganized but smooth and gentle. There was no wind and not many other boats, except commercial fishermen. We saw several large ships, steaming this way and that, probably in a hurry to make up time after the storm.

This time we stayed at the Plymouth Brewer Marina, on a slip. Slips are so convenient, shore power, easy on and off. The dogs were happy to get off the boat and go for a long walk around Plymouth. We showed our friend's Plymouth Rock, walked up to the old graveyard and back through the park. For dinner we decided on Surfside Smokehouse again. This time I got the lobster Mac and cheese, which was very yummy. All our meals were enormous. Gail got salmon tacos, Phil got fish and chips and Lee got fried chicken. 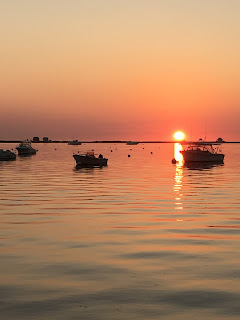 We awoke to a beautiful sunrise. Lee took the dogs for a nice walk, we ate breakfast and took our time. It's not far from Plymouth to Scituate. First we decided to get pumped out. We needed to go to the town dock to do so, but a motor boat snuck in right before us. He filled up on diesel, and then proceeded to hose off his boat as well. Meanwhile we motored around in a circle, waiting.

The approach to the town dock was very narrow. Lee ended up backing into it; I was very impressed. Fortunately there was no wind, otherwise it might not have been possible.

Once pumped and with our fuel topped off we headed out of Plymouth harbor and back into Mass Bay. Lee wanted to go out a bit and see if maybe we could spot a whale. We went out about five miles and then turned toward Scituate. Nothing, the water was calm, there was no wind. It was very warm, and there was very little shade.

The surf at the entrance to the harbor was surprisingly fierce. The sea wall had big crashing waves, even though the swells were only 2 feet max. We could only surmise that it was due to the angle of the waves, pounding directly on the wall. Later talking to the launch driver, he said the wind just howled last Monday and Tuesday, and they could see towering waves high above the sea wall at the entrance to the harbor.

Finally we were in Scituate Harbor. Always a lovely place to be. Once on our mooring we could set up our sunshade. In a little while we went into town. I took the dogs for a nice long walk. Back on the boat it cooled off rapidly once the sun went down. I went from shorts and a tshirt to a sweater, long pants and even a fleece, before we decided to go below for dinner. Lee made pork burgers and sweet potatoes and it was delicious. 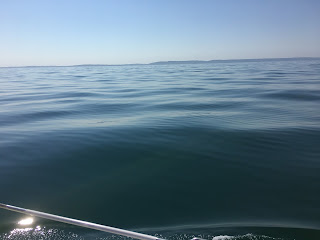 We woke up to thick fog, again. Not quite as bad as last time, but bad enough. When it was time to go we turned on the AIS, took down the Westie flag, and hoisted the radar reflector. We can receive AIS signals but we don't transmit, so other boats can't see us.

At first we used the air horn every two minutes. Poor Cosmo, he truly detests that horn. He was shaking and looking at me in distress, since I was the horn blower. We used up one air horn, and since we only had one more we went to every four minutes.

Motoring through fog in calm seas is so boring, and stressful too. It's like sailing around in a circle of water ringed by a cloud. The cloud shifts and changes a bit, but not very much. Everyone tries to keep a sharp lookout, cause there could be other boats out there like us that don't transmit. As we approached Marblehead finally the fog began to lift and suddenly it was another beautiful sunny hot day.

We packed up the boat and headed home. We were all very tired, and Gail and Phil had to get ready to fly home tomorrow. We still need to get the boat up to Salisbury at some point, but probably not for another week, or two. 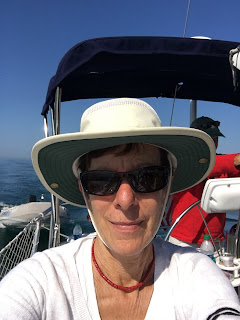 We certainly learned things on this trip. I kind of shudder at the thought that we almost decided to go ahead and go down to Plymouth before Jose hit. The boat would have been stuck there for a week anyway, and we would have had to figure out how to get home. And the winds there were strong enough that we saw some boats down there with damaged sails.

I wonder if this is the last time I will ever go out on this boat. It is for sale, but it may take awhile to sell, larger boats often do. It's probably our last sail boat, but certainly not our last boat. My husband loves the water way too much for that to be the case. But sailing is a lot of work and more and more we don't bother to put up the sails unless conditions are perfect. But motor boats that are large enough for cruising are very expensive to buy, and to own. So who knows what will end up happening! 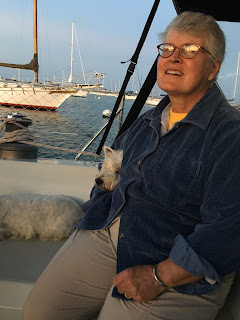