Florida 2017: Lynn Hears a Chamber Music Concert, We Visit Diane, and Go on a Walking Tour of Dunedin 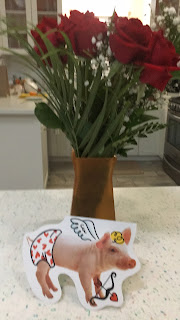 Feb 4th, Saturday. Because the Best Damn Race has the streets closed until 11 I head north on Main Street and run along McMullin Booth Road for my 5 mile run. Last year I ran the races but this year I’m still recovering from Dopey so no racing for me right now. It's not as scenic but the sidewalks are wide and plentiful so it's really no problem. Later we go to a place in St. Pete called The Bikery  to make a donation to the coffee shop ACLU fundraiser. Yeah it's a coffee shop AND a bike shop. We look at bikes a bit, go to another bike shop too. We may want to upgrade our bikes but we’re not sure exactly what we want.

Feb 6th, Monday. I traipse off to a mall in Tampa for Lee's valentine’s day present. We never go to Tampa. I don't know why, it's not that far. Later in the afternoon  we take the dogs to Enterprise dog park, the best dog park I've ever seen. It is huge, with actual trails and a separate section with agility equipment. The dogs love it, and it makes us happy to watch them run their little heads off, enjoying the wide open spaces and playing with other dogs. 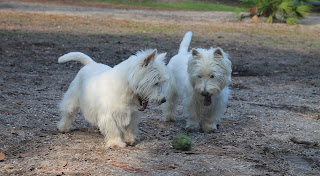 Feb 8th Wednesday. I take a boxing conditioning class in the morning. This year I have wraps for my hands and they seem to make a difference when I punch. This class is such a great workout, I look forward to it all year. And this year for once I seem to remember a bit so I don't have to start completely over.

In the evening I go to a Chamber music concert with Joan in St Pete. I drive the truck, which is fine except when it comes to parking. The parking lots right by the concert hall are full so we go down a couple of blocks. We find a quiet side street with plenty of parking but it's next to a park and seems dark and deserted. Neither of us know St Pete so we have no idea if it is a perfectly safe place to park there or dangerous, but we take a chance and leave the truck there.

The concert is really great. It's been awhile since I've gone to a classical music concert. Their name is The Ehnes Quartet. It's an all Beethoven program. They play 3 string quartets, one each from his early, middle and late periods. The early one contains no surprises, the middle one is very beautiful, and the late one has parts that are a little humorous, kind of like musical jokes. Especially the last movement, that seemingly pretends to end at least five times.

At intermission I try to turn on my phone but the battery has drained. I turn it back off and try not to worry about getting home. I know we need to head north, and preferably not go through Tampa. But once we get to the truck and I’m able to plug my phone back in it fires back up without any trouble. 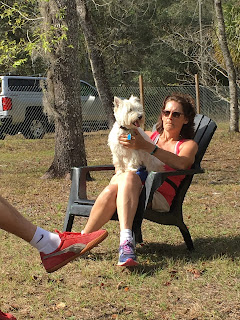 Feb 9th, Thursday. We go visit Diane in New Port Richie. We bring sandwiches, and sit in the sun watching the dogs play. Diane's dogs look great, all clean and groomed. Our dogs have a great time playing with her dogs and running around her big yard. Then we put the dogs in the house for a nap and take our bikes to a nearby park with a huge nature preserve. We go for a 13 mile ride through the trails in the park and the surrounding area.  We bike through fields of palmetto plants and pines, with the occasional turtle sunning itself along the path. 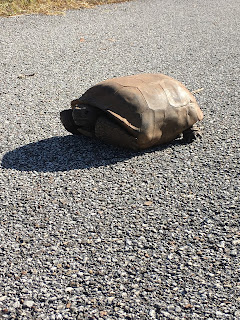 That night we try a new restaurant. The Little Lamb is a gastropub with good food. We split  a Caesar Salad. Lee has a lamb burger and I have the short ribs. Yummy! But in retrospect it must have been very salty because I gained two pounds overnight. 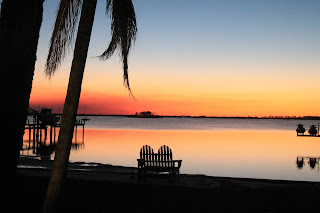 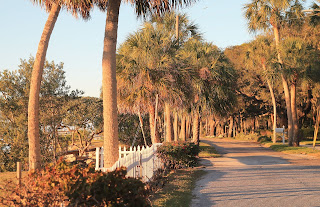 Feb 10th, Friday. We go on a sunset walking tour of Dunedin. Dunedin is a larger town than Safety Harbor. It has a lot of things going on so it's a fun occasional destination. I signed us up for a walking tour of Victoria Drive, which has fancy old houses along the shore. The houses and the sunset are lovely. The light slowly fades and all the men in our group have been given lanterns to light our way in the dark. That part of the tour is fine. And our tour guide, Vinny, is very knowledgeable. He know everything about these houses and the people that built them. The problem is, he doesn't seem to know how to be a little selective in the information he imparts. He gets sidetracked with so many stories that what was billed as a 75 minute tour was still going strong at close to 2 hours when we finally told him we had to go and took our leave. The rest of the people on the tour had more stamina than we did, or maybe they had the sense to eat something beforehand. We get a carry out dinner from the Greek gyro place we like, Famous Greek Salads. Its just a little restaurant in a strip mall but the food tastes heavenly. I think Vinny and Frank, our tour guide at the Vatican, would get along great. They could just talk each other to death.

Feb 11th, Saturday. It's Dunedin’s farmers market day so back we go. There is also a crafts festival going on so there are a lot of people in town. It's crowded and there's no place to park. We almost decide to give up but finally find a place in a little park about a half mile from the market.

We walk through part of the crafts festival on our way to the market. It's is huge, and so are the crowds. The dogs are very very good, and as usual they have their own personal fan club everywhere we go. We get fruit,  veggies, bread and bagels before we hightail it out of there. We stop at the fish market on our way back to the car and get some amberjack for dinner. 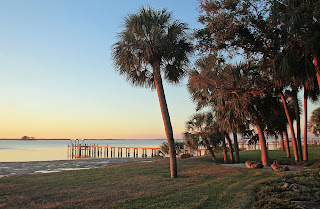 Feb 12th, Sunday. Lee and I go on a bike ride, 16 miles along the Wilson Reams trail and then the Progress Parkway trail until it peters out. We cycle through a subdivision after the Progress Parkway trail ends. I know there is a road somewhere we can take to get to the Pinellas County Trail but I don't remember where it is so we turn around, taking a detour through Kapock Park on the way back. It is another beautiful day in Florida and they're having another blizzard at home. We’re not sorry to be here, not at all. 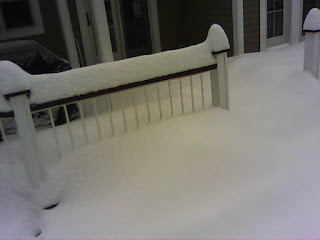