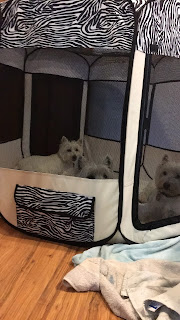 Saturday June 11th. I do a 10 mile run at 5 am by running around the lake at our RV park in St. Peter's Missouri twice, stopping for water at the camper in-between each loop . Then it's on to Columbia, a less than two hour drive away. It's not too hard to set up the RV in front of Joanne's house. We plug into her water and electricity and we're all set. Joanne has a cat so we set up the soft sided crate in her den for the Westies. This is fine, until Simone ventures out from the bedroom. And it would have still been fine if we had bothered to zip up the top of the crate. Up leap the Westies, tipping over the crate and leaping out of the top. Off goes Simone back to the bedroom, with the pack in hot pursuit. Before I can get them away I hear a YEAORWRRRR and a short yip. Someone got their nose scratched, I think. I chase the Westies out of the bedroom and close the door. Poor Simone! No fair getting chased in your own house!

Sunday June 12. Dot and Ann, Lee's aunt and cousin, come over for lunch. We have BBQ chicken and potato salad. That evening we go over to Gail and Phil's for dinner. We have known them forever, since the kids were babies, and have taken great vacations together. Gail always has interesting projects going on. She is currently making a dinette set for one of her daughters. It looks very very nice! Phil is taking up running again and asked me all sorts of questions. He is using the run/walk method. Good for him. Jeff Galloway says if you combine running and walking in the appropriate combinations you can run your entire life. I don't see why not!

Monday June 13. I start the morning with a 6 mile run. I'm supposed to do 3.5 miles at race pace but again I can't really because of the heat, so run it by feel. It ends up a 7 on a scale of 1-10, 11:50 mpm, not too bad considering. Then we drive up to Fayette to get a rocking chair from Lee's Aunt Dot for Sarah. It's a pretty little rocker with simple lines, maybe needs the seat replaced. It is Grandma Norton's rocker, made for a little person, so there you go. We eat lunch at Everett's, a Cajun restaurant on the town square in Fayette. We have the dogs with us so we leave them in the car with the air conditioning on and the engine running. I sit at the table in the restaurant so I can see the truck, even though Lee makes fun of me. I don't want anyone stealing our dogs, or thinking they are in distress and smashing a window!

In the evening we go over to Mark and Mary's house. We drive past their house to look at "our" house, the one that we built, where we lived for 14 years and raised our kids. Sometime I'd like to knock on the door and ask if we could come inside and see it. I bet its changed a lot, which might be a little unsettling. I wonder if they'd mind if we tried to find the "time capsule" Sarah buried behind the garage when she was ten years old!

Mark and Mary have two crazy boxers so we've left our dogs back at Joanne's. Tucker is pretty calm, but Duke is only two and still pretty crazy. Who knows what they would have thought if three Westies invaded their space...plus they have a cat, and we know how that worked out with Simone....

Mary is a great cook, we have salmon, lentils and a yummy salad for dinner.

Tuesday June 14th. Lots of eating and avoiding the heat. French toast for breakfast, blts with Missouri tomatoes for lunch, frozen custard for dessert. This is a Midwest thing. It's not the same as soft serve ice cream, trust me! Oh, and Shakespeare's pizza for dinner. 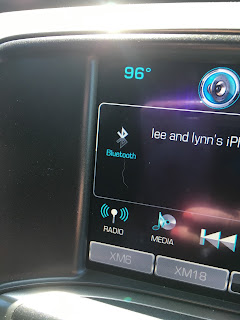 Wednesday June 15. My last 4 mile run goes well. I've done everything I can for the marathon, now its off to Kirksville, Missouri to visit Lee's Aunt Pat and cousins Eric and Jon. Hot hot hot. High of 97. We park the RV at the Northeast Missouri State Fairgrounds across from Pat's house. There is water and electricity but no sewer. There is a dumping station but without Jon's help we may never have found it. We are the only ones staying at the Fairgrounds. For the dogs this is great. Its far from the road and there is a fence so they have a giant field to run around in. 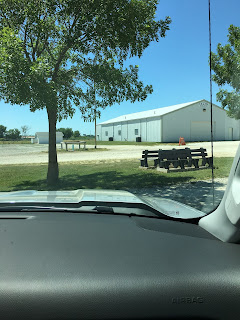 Lee's Aunt Pat is amazing. She is 92 and still going strong. The woman in my husband's family live forever. It's fun visiting with everyone and eating lots of good Missouri country cooking.