I arrived in Reno without mishap, went and got our rental car, parked it in the airport garage, and went to wait for Lee, who was coming in on a later flight. Unfortunately his flight was a bit delayed, so I had to wait about an extra half hour before he arrived. I ate at an old-fashioned diner at the Reno airport that was very good - bison burger and tomato basil soup. I walked around, enjoying the blue skies and crisp sunny air, and watching all the VFW soldiers and their families arriving at the airport for a big convention being held in Reno that weekend. Finally Lee arrived, we grabbed his bags, got in the car, and off we went to Squaw Valley. 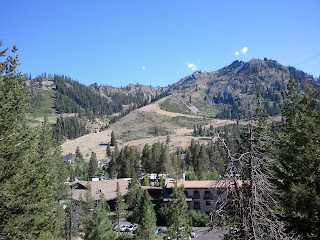 We checked into the Squaw Valley Lodge, walked around the Village (cute), tried out the pool (COLD!), and got settled in our room. Before too long it was almost 5 pm, time for me to throw on some running clothes and go meet the other runners and participate in our first group run. I was excited, and nervous.

I walked out to the lobby, and there was Jeff Galloway! Once I told him my name he actually knew who I was from coaching me via email for my first two marathons! It was fun to meet him, his wife, and a few of the people that work at his shoe store in Atlanta.

There were not a whole lot of participants for the weekend camp, maybe 15 total. The week long camp has 45 people; the weekend is a more intimate group. It's nice to get so much individual attention, but it's a pretty crowded schedule too, with runs, hikes, meals and clinics filling almost every available minute of the day.

We set our watches and timers and started on an easy out-and-back run from the lodge. There were runners of different speeds and abilities. I fit into the slower group, and for this run I was probably the slowest. I tried to tell myself this was okay. After I'd just crossed 3 time zones, flown for 7 hours, and climbed 6,000 feet in elevation! But my ego disagreed, and I strived mightily to stay up with the slower group.


It was a beautiful run, with the mountains soaring in the distance, and a bright blue sky overhead. It was a little warm however, in the mid70s. By a mile and a half I was ready to turn around but my little group encouraged me to stay with them until we reached the two mile turn-around. I faded at the end, just like I often do in a race, and felt a little discouraged. This was what I had feared would happen, pokey Lynn trailing way behind everyone else. I tried not to mind, but I did.

Dinner was very good, and my spirits picked up after having a little something to eat. We had our first clinic after the race, where the shoe people talked about proper shoe fit and the characteristics of the many, many shoes available today. Interesting, and confusing. We also went around the room and introduced ourselves. We were runners of all shapes, sizes and abilities, some of whom had been coming to Jeff's camp for more than 17 years!

By 9 pm I was drop dead tired and ready for bed. My body thought it was midnight, and I had to be ready for a 6 am run in the morning.

I slept great and was up by 5, ready to try this running thing again. I checked the weather; it was 43 degrees! I decided on tights, long sleeves, a beanie for my head and that turned out to be perfect. I ended up leaving my gloves behind and I was okay, but I wouldn't have minded having them either.

We carpooled a short distance up the highway to a parking lot by a bike trail. The faster runners took a trail that led them over a mountain and back to the lodge. The rest of us ran the bike trail along the river. This time I had no trouble keeping up with the slower group. The temps were better and I guess I'm getting used to the altitude. It certainly made my little ego feel better!

After the run there was time for a quick shower and breakfast, and then we had the morning clinics. Jeff gave a great presentation about mental preparation for running and reviewed the components of his program. You think by now I'd know everything there is to know about run-walk-run, but I really picked up some pointers from hearing him speak and being able to ask questions. There are a few changes I'm going to make to my training when I get home, just from this morning's talk.

THEN we had the opportunity to have ourselves videotaped running and having our stride and foot fall evaluated by a sports podiatrist, Dave Hannaford. Besides being a little embarrassing this was a great chance to find out that I don't look like a complete idiot when running, that my form isn't that bad, and that I'm wearing a good pair of shoes for my feet. I was also able to talk to him a little about my bunions and he even made a temporary pair of orthotics for my shoes out of felt! If I decide I like them he will even work with me long distance to make me a permanent pair.


After lunch and more clinics we went on a hike on the Shirley Trail, that climbs the mountain outside our hotel. The trail goes all the way up to High Camp at the top of the mountain, but we only went up about halfway. It was a beautiful hike but they said it very dry this year. 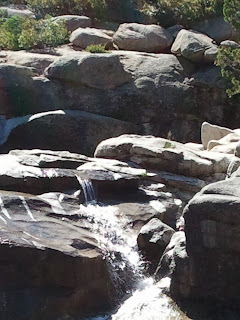 Last year there was still snow on parts of the trail and in fact a couple of the participants got lost because they couldn't see the trail markers because they were buried in the snow. They had their cellphones though and were rescued safe and sound. It's not that wild really. 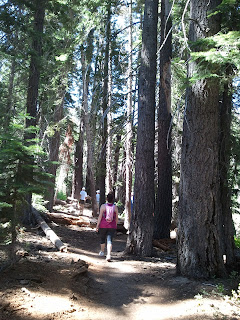 After the hike I went and sat at the pool for awhile. I started talking to one of the guys from Jeff's shoe store and found out he was born in Hong Kong and has been back there to visit several times. We had fun talking about the city and I told him about Bowen Road and the Peak, as good running spots in the city.

After dinner Jeff told a few very inspiring stories about the Olympic runners he had known (Jeff ran the 10k in the 1972 Olympic Games). The main point of these stories were how these people really rehearsed their success mentally and had an extraordinary amount of determination and grit. I often think about this when I am running in a race and I get tired. Part of my brain wants to keep running hard and part of it is going "I can't! I can't! I can't!" My negative brain often wins, and then 15 minutes after a race I'm disappointed in myself and think I could have done better. I keep talking about my brain because although the effort hurts physically, it seems like its the mental part that causes me to slow down. Jeff gave us some pointers on overcoming this tendency to let our negative thoughts take over. If I'm going to use them effectively I'm going to have to start practicing them when I train. Well, okay!

This morning, Sunday, was our final run. We ran along Lake Tahoe, and I'm glad. It wouldn't be right to go all the way to Squaw Valley and not see the lake! I ambled along happily, sometimes by myself, sometimes with other runners. Some of the others actually saw a bear! I'm a little jealous, and a little glad it wasn't me.

At the end of the run a few of the braver runners jumped into the icy waters of the lake, but most of us gingerly took off our shoes and socks and waded in a little ways. Once the initial shock wore off it actually felt pretty good!

One more breakfast and that was the end of the camp. I met some really nice people, had a lot of fun, learned a lot, and gained more confidence in my running. I'd like to go back again someday, maybe do the week long camp. We'll see!

Now Lee is on his way to Asia and I'm on my way back to New Hampshire. My flight gets in very late, so my plan is to sleep late, go get Harper, and NOT RUN! I haven't run three days in a row in years and my body really feels it. This runner is ready for a day off from running. 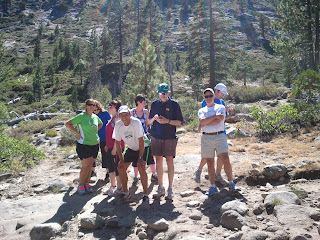 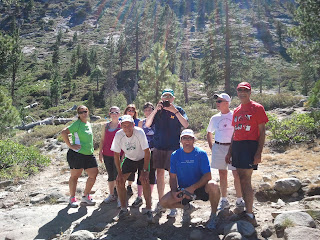